Objective: Acute renal failure following heart surgery is a major complication. The aim of this study was to evaluate if duration of cardiopulmonary bypass (CPB) is an important factor that influences kidney dysfunction. Methods: One hundred and sixteen patients from a single center referred for heart surgery were evaluated. Demographic factors, clinical data, operative and postoperative variables were evaluated. Serum creatinine and creatinine clearance were calculated until the fifth postoperative day. Acute renal failure was defined as the requirement of dialysis therapy. Patients were divided into two groups, the CPB £70min Group, patients with CPB duration equal to or less than 70 minutes and the CPB³ 90min Group, patients with CPB duration equal to or more than 90 minutes. Results: The median increases in serum creatinine were 0.18 + 0.41(CPB£70min) and 0.42 + 0.44 (CPB³ 90min - p=0.005). Dialysis was indicated in 1.3% (CPB£70min) and 12.5% (CPB³ 90min - p = 0.018). The odds ratio for dialysis was 1.12 (95% CI; 1.00-1.20) for CPB³ 90min. There was no significant difference in mortality (5.2 versus 7.5%, p = 0.631). Conclusion: The greatest likelihood of developing kidney failure after heart surgery is observed when CPB is at least 90 minutes, although creatinine clearance was not significantly altered between the groups studied.

Renal dysfunction in the postoperative period of heart surgery is a risk factor for hospital mortality [1,2]. It is a frequent complication in the postoperative period of heart surgery, with a reported incidence of between 1% and 31% [3-7]. The causes for renal dysfunction are multifactorial, with cardiopulmonary bypass (CPB) [8] producing harmful effects for renal function [9]. The non-physiological state of CPB triggers inflammatory cascades and coagulation disorders that change renal function. Patients with renal dysfunction before being submitted to heart surgery present an aggravation of the renal injury which affects long-term survival [10,11].

The aim of the current study is to evaluate the influence of the duration of CPB as a risk factor for renal function alterations.

The patients, submitted to heart surgery between January and August 2003 in Hospital de Base, Bauru, Brazil were prospectively and consecutively assessed. The local Ethics Research Committee approved the study. Exclusion criteria were patients with ages less than 18 years old and preoperative renal failure requiring dialysis.

Hypothermia at 32ºC was employed during CPB with non-pulsatile arterial blood flow at 2.4 L/min/m2 and a perfusion pressure between 60 and 80 mmHg. Myocardial protection was by intermittent anterograde hyperkalemic blood cardioplegia. Blood transfusions were made during CPB to maintain the hematocrit concentration greater than 17%. The MAP was greater than 65 mmHg during the process to interrupt CPB. The heart was supported by an external pacemaker when the heart frequency dropped to less than 70 bpm. Dobutamine was routinely used at an initial dose of 3 µg/kg/min. When the MAP fell to under 65 mmHg, noradrenalin was administrated. Protamine was utilized (1mg for each 100 IU of heparin). Prophylactic antibiotic therapy was performed using cefuroxime in the first 48 postoperative hours.

The creatinine clearance was calculated in the preoperative period and on the 1st, 2nd and 5th postoperative days.

Hemodialysis was performed to treat hyperpotassemia, hypervolaemia, uremia or metabolic acidosis due to acute renal failure (ARF) when necessary.

Stratification of the groups

The continuous variables are presented as means ± standard deviation. Ordinal variables are presented as frequencies (%).The chi-squared test or Fishers exact test were utilized to analyze ordinal variables. The groups were compared using the Student t-test for non-matched samples. The two-tailed variance analysis for repeated measurements and post-hoc Bonferroni analysis was used for creatinine clearance analysis within each group. The significance level was established at 5%. The statistical analysis computer program SPSS® version 11.0 (SPSS, Chicago, IL, EUA) was utilized.

One hundred and sixteen patients submitted to on-pump heart surgery in the study period were analyzed with 28 individuals being excluded because the CPB duration was between 70 and 90 minutes.

Fifty-six of the patients were women. For all the patients, the mean age was 56.74 ± 15.37 years and the mean CPB duration was 74.70 ± 29.44 minutes. Ninety-one coronary artery bypass grafting surgeries and 25 valve surgeries were performed. 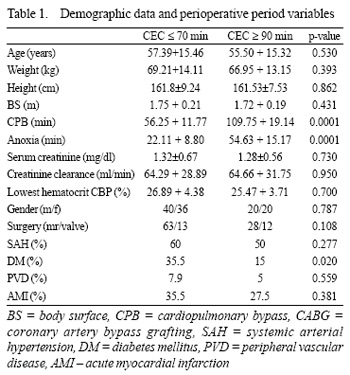 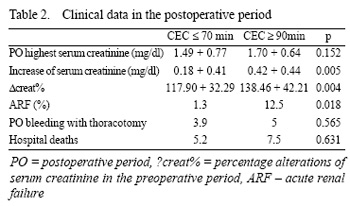 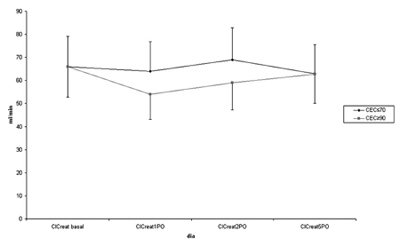 Advanced age, diabetes mellitus, preoperative renal dysfunction, peripheral vascular disease and body weight are known preoperative risk factors for the development of ARF [6,13-15]. In spite of the widespread use of off-pump heart surgery and of new equipment and drugs to prevent postoperative renal dysfunction, the incidence of renal failure is high and ARF is a challenging problem in heart surgery [16,17].

CPB triggers a significant inflammatory response in heart surgery [18,19], with significantly fewer consequences when the CPB duration is less than 70 minutes [20]. Renal dysfunction in heart surgery evaluated by CPB durations of less than 70 minutes or greater than 90 minutes was assessed for patients with serum creatinine levels of up to 200 mmol/dL (1.7mg/dL) in the preoperative period. In this study, 100 patients were evaluated up to the 2nd postoperative day with changes in renal tubular enzymes being reported, including beta N-acetylgalactosaminidase and glutathione transferases [12]. The evolution of serum creatinine and creatinine clearance in our study was performed until the 5th postoperative day and dialysis was utilized as the criterion for ARF. It is important to note that 12.9% of our patients presented with serum creatine greater than l.7mg/dL.

The longer CPB duration may provoke the increased risk for arterial hypotension with local renal hypoxemia [3,13-14]. Additionally, the longer CPB duration is associated to an increase in proinflammatory cytokines such as TNF-a, IL-1, IL-6 and endotoxins, which may explain tubular injury and the deterioration of the renal function [12,20].

During the CPB, episodes of embolia must be considered as a potential risk factor for renal infarctions and subsequent reductions in renal function [21,22]. Recently it has been discussed whether not using CPB during coronary artery bypass grafting may protect renal function [23]. Sensitive markers of renal tubular injury, such as N-acetyl-ß-D-glucosaminidase, are elevated in patients after CPB [24]. A recent metanalysis demonstrated that dialysis is less common in patients submitted to off-pump coronary artery bypass grafting [16].

There are several limitations in the current study. First, it is an observational study in just one center. Second, the variability of results may lead to errors that did not demonstrate correlation, in spite of being significant. Third, the data presented do not allow the evaluation of the CPB duration, of blood flow and of the perfusion pressure independently. And finally, dialysis may have started after the 5th postoperative day.

The development of ARF after postoperative heart surgery is commoner in patients with CPB duration longer than 90 minutes compared to the group with duration shorter than 70 minutes.