Cardiopulmonary bypass is identified by the system as an aggression, complex, multifactorial agent, generating also a multifactorial response [1]. The consequences of cardiopulmonary bypass (CPB) manifest as temporary dysfunction of different organs, producing a series of reactions and changes in the physiological balance. More serious complications may still result in systemic inflammatory response syndrome (SIRS) and death [2]. Among them, one of the most common is acute renal lesion (ARL), which causes abrupt decline of the renal function, resulting in serum retention of nitrogenized products [3]. Its incidence in cardiovascular surgery is é variable (5% to 39%), depending on the degree of function loss, considered as a diagnostic criterion of acute renal insufficiency [4].

Associated diseases, aging, compromised renal function, emergency surgery and obesity are acknowledged as factors of predisposition for the occurrence of acute renal insufficiency (ARI)[4]. The non-pulsatile flow during CPB is an important factor that results in renal vasoconstriction and lesion by ischemia [3].

Alongside classical aspects of the ARI mechanism, molecular and cellular mechanisms, specifically calcium and other molecules, are involved in the ischemic event [5].

The inhibitors of calcium conduits contribute in the treatment of hypertension, coronary insufficiency and alterations in the cardiac rhythm. They were used previously and after kidney insult in the treatment of arterial coronary disease [6]. Its action interrupts further progression of ischemia that causes cellular demise, reducing transportation of the calcium ion and its use by the mitochondrias. Although not being a routine therapeutic measure, its benefits were observed in real transplantations, in nephrotoxicity by cyclosporine and in procedures with iodide contrasts [7-9].

Considering the references in literature emphasizing the role of the calcium ion in the cellular lesion of ARL and reports about the apparent protection of the inhibitors of calcium conduits, alleviating the renal aggression, we believe it is appropriate to investigate the possible protective role of nifedipine over the renal aggression in the perioperative period of the myocardial revascularization surgery using cardiopulmonary bypass.

There were studied sequentially and prospectively, 94 patients interned in the cardiovascular surgery ward of the Hospital das Clínicas da Faculdade de Medicina de Botucatu, UNESP - Universidade Estadual Paulista from November 2003 to December 2004. The patients were divided in four groups according to the decision regarding the use and method of administration of nifedipine by the the medical team that assisted those patients:

For the exclusion criteria were established: duration of CPB over 2 hours and 30 minutes; mean blood pressure lower than 50 mmHg over 10 minutes during CPB, age over 70 years; reoperation; another associated surgery; emergency surgery; use of counterpulsating device; chronic renal lesion.

The protocol of the study concluded that: inclusion of the patients after their consent, identification of preoperative co-morbidities; medical prescription observation; routine laboratory evaluation and serum creatinine dosage 24 hours prior to surgery. During the surgical procedure intraoperative risk factors were identified (CPB) and laboratory evaluation for CPB management performed. In the immediate postoperative (24 and 48 hours) and in the late postoperative (7th day), laboratory evaluation with serum creatinine dosage and medical prescription observations were carried out; in the 7th day the protocol was completed.

The protocol of perfusion used by our service concluded that: perfusate combined with sodium chloride solution at 0.9% and mannitol at 20%. After sodium heparinization at dosage of 4mg/kg and activate coagulation time (ACT) over 480 seconds, the cannulas were installed and the CPB started with arterial flow around 60ml/kg/min, maintaining mean blood pressure (MBP) at 60mmHg and body temperature between 28ºC and 30ºC. After aortic clamping, it was performed an intermittent and hypothermic anterograde myocardial protection with induction and maintenance dosage. After completing CPB and removing the cannulas, it was administered protamine hydrochloride at dosage 1:1, in order to achieve ACT equal or lower than 120 seconds.

The inhibitor of the calcium conduit used was Nifedipine (Adalat Retard®, Bayer), in the dosage 10 to 20 mg, every 8 hours. The medication was interrupted in the preoperative period, one day prior surgery, and it was reintroduced in the immediate postoperative period.

This work was submitted to evaluation of the Ethics and Research Committee of the Hospital das Clínicas da Faculdade de Medicina de Botucatu - UNESP, and approved on 11/03/2003.

In the statistical analysis it was used a regression model for repeated measures (proc mixed of the SAS program), in which were calculated the values of serum creatinine; being the latter the only variable with normal distribution (calculated the mean). The gama distribution was adjusted (general linear model with error assuming gama distribution) for variables that did not present normal distribution. For CPB variables it was used a general linear model (proc genmod of the SAS program) with error gama distribution and connection function log. The Fisher's exact test was used for the calculation of the percentile of patients that presented an increase in serum creatinine higher than 30% (Δ>30%). With significance level of 5% (P value<0.05).

There were followed up 94 patients described in Table 1, with ages ranging from 57 to 60 years in the groups, being 67(73.3%) male patients. For each group studied, it was observed the presence of comorbidities [high blood pressure (HBP), diabetes mellitus, dyslipidemia], calculus for median serum creatinine and calculus for 30% increase in the basal value of serum creatinine characterizing ARL.

There was no statistical difference among the groups studied related to the parameters of CPB (Table 2).

In Table 3, we can observe that there was no association among the variables: gender and groups with presence or absence of comorbidities (HBP, diabetes mellitus, dyslipidemia) and the statistical analysis showed that there was no significant difference among the data acquired. 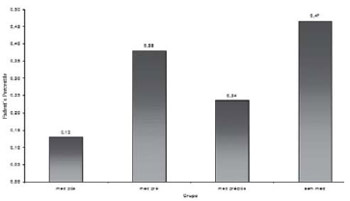 In Figure 2, the mean of serum creatinine did not present statistical difference among the groups studied (G1,G2,G3,G4), although among the groups and moments (M1,M2,M3,M4) it was observed an increase in serum creatinine specifically in group G2 (postoperative medication) at the moment M1 (preoperative) for M2 (24 hours of postoperative). Compared to the remaining groups (G1,G3,G4), there was no statistical difference compared to the moments (M1,M2,M3,M4). 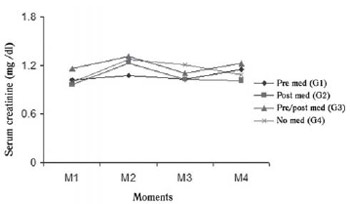 Fig. 2 - Means of the values of serum creatinine according to moments and groups, where M1 to M2 with P<0.05 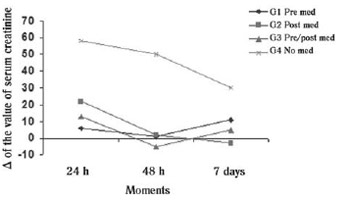 Fig. 3 - Means of the values of the delta percentiles (Ä%) of serum creatinine among the moments in the groups, where G4 < 0.05.

ARL may occur in the postoperative period of any surgery and it is referred as the acute reduction of the renal function in hours or days. Despite the technological advances in monitoring and assistance of patients, its prognostic remains serious, with the possibility of death.

The diagnostic of ARL in the present study was based on the increase of serum creatinine, defined as equal or higher than 30% of its basal value in the first 24 and 48 hours of postoperative. This criterion was described by Barretti & Soares [10] and Balbi et al. [11] in works performed in our Institution, which identified as the main cause of ARL intrinsic to ischemia, being responsible for approximately 50% of the cases.

In cardiovascular surgery, several studies have been indicating that ARL is a frequent complication, being associated to high rates of mortality and prolonged stay in ICU [12-14]. Machado et al. [12] refer mortalities within 30 days of patients with and without acute renal lesion of 12.6% and 1.4%, respectively. Thakar et al. [15] attribute to ARL high risk alone for mortality compared to other types of complications in the postoperative and developed an ARL prediction score in the postoperative of cardiac surgery, incorporating all major risk factors [16]. For Kochi et al. [3], the detection of contributing factors for the development of ARL after cardiac surgery makes possible adopting early procedures in order to avoid renal dysfunction and decrease mortality.

There is vast evidence that the harmful effects of CPB on the kidneys are related to the duration of perfusion and other conditions of CPB [1,3,17-20]. Stallwood et al. [20] reported that CPB alone is associated to the significant increase in the risk of ARI in coronariopathic patients. The renal blood flow and the glomerular filtration rhythm during CPB are reduced in 75% with partial, but not complete, recovery after the first postoperative.

The analysis of conditions of CPB in our study showed that there was no statistical difference among the groups related to the perioperative parameters of CPB.

Epstein [8] showed that the inhibitors of calcium conduits produce beneficial effects over the renal function. In experimental studies in kidneys of rats, applying videoscopical techniques that allowed direct visualization of efferent arteriolae, it was observed that the inhibitors of calcium conduits antagonize the glomerular vasoconstriction [9]. In addition to it, its natriuretic effect suggests that its use may prevent or reduce the occurrence of ARL.

Bertolissi et al. [21] evaluated the effects of the continuous administration of nifedipine over the renal function during the CPB procedure. They observed that the continuous infusion of nifedipine during the CPB reduced the occurrence of ARL and pointed out that this may consist in an extra tool for the protection of the renal function in patients submitted to cardiac surgery with CPB, decreasing the influx of calcium in the slow conduits and producing vasodilatation of the arteries.

Stafoord-Smith [22] refer that although not being a routine therapeutical procedure, the benefit of the inhibitors of calcium conduits may be used for the treatment of patients that present increase in serum creatinine, in average, 48 hours after cardiac surgery with CPB, with no need for dialysis.

Our results showed in group G4 (without nifedipine) increase in the basal value of serum creatinine of, respectively, 58% and 50% in moments 24 hours (M2) and 48 hours (M3) in the postoperative, and decreasing to 30% at the 7th day of late postoperative (M4), elevated values compared to the rest of the groups (G1, G2, G3), showing higher risk of this group.

The patients that developed ARL in group G4 was 46.66%, compared to G1 of 12.5%, G2 of 37.93% and G3 of 23.53%, reinforcing the hypothesis that nifedipine may reduce the occurrence of ARL in the postoperative of patients submitted to cardiac surgery with CPB when compared to the work performed by Bertolissi et al. [21].

Therefore, we believe that the references about the possible nephroprotective effect of nifedipine, its frequent use by patients holding coronary insufficiency, as described by Lopes et al. [6], and the importance of tools for preventing renal lesion in patients submitted to myocardial revascularization with CPB, justifies the performance of new studies in this area.