Atrial fibrillation is a common type of arrhythmia and is an important cause of stroke and heart failure. vitamin D is an emerging risk factor of AF, and is implicated in the pathophysiology of atrial fibrillation. It has been established that this vitamin is extensively involved in the regulation of both the renin angiotensin aldosterone system and the immune system. Epidemiological studies have not yet reached a consensus on the possible association between vitamin D deficiency and atrial fibrillation. Better research designs and methods can further clarify the relationship between the two.

Atrial fibrillation (AF) is the most common type of arrhythmia. It is not a fatal arrhythmia itself, but it can impair the quality of life and can easily lead to stroke and increase the risk of cardiac death. AF epidemiological studies have concluded that the prevalence of AF is underestimated, the most important reason is the missed diagnosis of paroxysmal AF and the low enthusiasm for patients with asymptomatic AF. As the age structure of the population changes, the proportion of elderly increases, and other risk factors such as hypertension, diabetes, and cardiovascular disease increase, it is foreseeable that the future prevalence of AF will continue to increase.

At present, the pathogenesis of AF is not clear. Although antiarrhythmic drugs are widely used in clinical treatment, the effects of these drugs are not satisfactory due to frequent recurrence of AF and significant proarrhythmic effects[1]. Radiofrequency ablation and other procedures for patients with AF are not ideal for long-term benefit; therefore, upstream treatment of AF, the prevention of AF episodes is more important. Exploring targets that are new and easy to detect and control has become a new goal for the treatment of AF. Since 1990, Kessel[2] reported a case of taking vitamin D to cure chronic AF, and the relationship between vitamin D deficiency and AF has gradually become a research hotspot.

In the past studies, vitamin D research had been concentrated on bone metabolism. In recent years, studies have found out that vitamin D deficiency is involved in the pathogenesis of hypertension, heart failure, coronary heart disease, and obesity[3]. These factors are also common risk factors for AF. The biological effects of vitamin D are mainly derived from its binding to the nuclear steroid hormone vitamin D receptor (VDR), which exists in almost all tissues, including cardiac myocytes, and is involved in the structural changes of cardiac cells[4].

It is well known that AF is closely associated with an inflammatory milieu. Vitamin D can increase the production of interleukin (IL)-10 and reduce the production of IL-6, IL-12, interferon-γ, and tumor necrosis factor alpha (TNF-α), thereby generating a cytokine spectrum that is conducive to reduce inflammation[5] and the reduction of vitamin D and vitamin D-binding protein (VDBP) as part of the acute inflammatory system response. However, studies have suggested that vitamin D deficiency may be a consequence, not a cause of inflammation[6]. And vitamin D supplementation may delay the inflammatory response caused by decreased VDR function[7]. Vitamin D is a negative endocrine regulator of the renin-angiotensin-aldosterone system (RAAS)[8], and low plasma 25-hydroxyvitamin D3 levels may result in upregulation of the RAAS[9], while inhibition of the RAAS can prevent the onset of AF[10]. Vitamin D deficiency may impair the prevention of AF by inhibiting RAAS[11].

The study found out that hemodialysis patients may inhibit the expression of vitamin D through fibroblast growth factor 23 (FGF-23) and promote the formation of AF[12]. Mathew demonstrated a consistent association between high circulating FGF-23 concentrations and an increased risk of developing AF[13]. High FGF-23 levels inhibit 1-alpha hydroxylase activity and reduce vitamin D3 production[14]. It is confirmed from the side that vitamin D deficiency is associated with AF.

First, in a large sample of community studies, the relationship between AF and vitamin D deficiency appears confusing. Rienstra et al.[17], Vitezova et al.[18], and Alonso et al.[19] found out that there were no clear relations, but Vacek et al.[20] thought they were related. The biggest difference between the two types of studies was the age of the study population. The average age of the study population in Rienstra was 66 years, the age of those in Vitezova was 71 years, and the study population in Vacek was relatively young, with an average age of 55 years. Among the risk factors for the incidence of AF, age is an independent and relatively important one. With increasing age, the risk factors for AF are high. Alonso's study was interesting, he found out that vitamin D deficiency was not associated with AF risk in different genders and ethnic groups, and as with other prospective studies, meta-analysis did not support the correlation between these two. However, he also pointed out that there was still a correlation between AF and vitamin D deficiency in a relatively young population (< 58). The lower the concentration of vitamin D, the more likely it was to contribute to the formation of AF, while in the old population, the effect was not obvious.

Secondly, in the classification study with relatively small sample size, the relationship between AF and vitamin D deficiency in different types of patients is also widely debated.

Through the meta-analysis of several studies, it was found out that vitamin D deficiency was associated with the occurrence of AF. In patients with chronic AF, vitamin D deficiency was associated with the development of AF, and the risk of AF increased to a certain extent[34]; while focusing on new-onset AF, there was no significant association between vitamin D status and risk of AF[34,35]; however, due to the heterogeneity of the studies included in this study, the results were not convincing.

The relationship between vitamin D deficiency and AF still requires more basic research support in the study of mechanisms (Figure 1), and the results of epidemiological investigations are more convenient for guiding clinical work. Through several research findings, it can be inferred that vitamin D is in the process of AF, and the weight is not large compared with other risk factors, such as advanced age, hypertension, and coronary heart disease. The connection between the two is not suitable for large-scale community survey research and is not suitable for research in the elderly and people with more basic diseases. The exploration of the relationship between the two requires a more accurate classification of research. There may be unexpected surprises in the study of designated populations, such as patients with isolated AF and patients with low-grade non-valvular AF. Studies on whether vitamin D supplements prevent AF also need to be precisely classified. 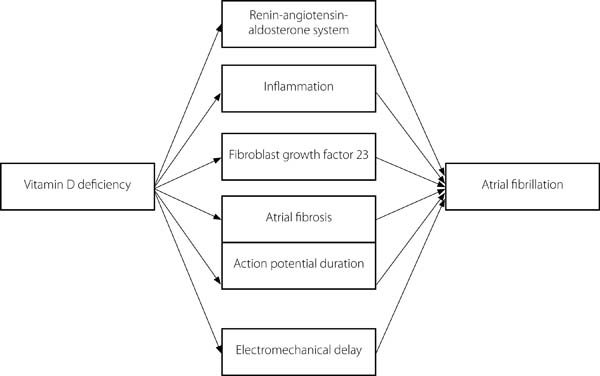 Compliance with Ethics Guidelines This manuscript is a review article and does not involve a research protocol, which would require approval by the relevant institutional review board or ethics committee.
No financial support.
No conflict of interest.

LB Agreement to be accountable for all aspects of the work in ensuring that questions related to the accuracy or integrity of any part of the work are appropriately investigated and resolved; final approval of the version to be published.