Operative management of aortoiliac occlusive disease in presence of horseshoe kidney: report of a case

Coexistence of aortoiliac arteriosclerosis with horseshoe kidney in a 57-year-old man is presented. Diagnosis of this unusual combination was made shortly before surgery. Magnetic resonance angiography is the most important preoperative diagnostic tool for surgical planning. A transabdominal approach provides excellent exposure of the abdominal aorta in patients with a horseshoe kidney without risk of injury to renal accessory arteries or to a ureter in an anomalous position. Implantation of an aorto-bifemoral Y prosthesis was made using a Dacron bifurcation. By diffuse atherosclerotic lesion and in presence of horseshoe kidney, an end-to-side proximal anastomosis of the aorta was carried out.

Horseshoe kidney is the most common urinary tract anomaly however the association of this anomaly significantly increases the difficulty of aortic surgery in aortoiliac vascular disease. The anterior position of the horseshoe kidney isthmus and often occurring anomalies of the arterial and collecting systems create major intraoperative technical problems. In the literature the combination of horseshoe kidney and aortoiliac disease is very rare. In most cases aortic surgery has to be performed for abdominal aortic aneurysm and seldom for occlusive diseases [1,2]. CT scans are not routinely obtained preoperatively in patients with occlusive diseases. Therefore, existence of a horseshoe kidney can be easily missed and may give rise to serious intraoperative problems. Here and for the first time we discuss and present the most accurate preoperative diagnostic method and the optimal surgical approach in aortoiliac occlusive disease associated with a horseshoe kidney.

A 57-year-old man, whose initial symptom was persistent disabling bilateral claudication and necrosis of the left lateral malleolus following an injury, was admitted by casualty surgeons of our hospital. Digital subtraction angiography (DSA) revealed aortoiliac arteriosclerosis with occlusion of both common iliac arteries. Despite conservative treatment the left leg became critical. Impaired blood supply of the lower extremities and the critical situation of the left leg, led to its amputation above the knee (the distal one-third of the femur). Three weeks later, the patient was referred to our department for evaluation of aortoiliac occlusion disease and finally aortic surgery. He had mild arterial hypertension and smoked 15 cigarettes a day. There was no history of cardiac, cerebral or renal vascular disease. On examination, he was generally well, chest and abdomen showed no abnormalities. The femoral pulses were dramatically diminished and there were no distal pulses on the right side. Preoperative evaluation was made (blood, ECG, chest X-ray, blood gases) and all of the results were within the normal range. Just before beginning the operation, review of the DSA revealed an abnormal structure similar to the kidney. The operation was started with an association of a horseshoe kidney as the first differential diagnosis of the unknown structure. We approached the aorta transperitoneally and a horseshoe kidney with a specific blood supply was found, as expected from the DSA (Figure 1). The aorta was partially clamped and a 16 x 8 mm Dacron bifurcated prosthesis was implanted with the creation of an end-to-side proximal anastomosis above the level of the accessory renal artery and distal anastomosis to the common femoral arteries. The isthmus was mobilized away from the aorta and the graft was placed underneath it. The postoperative course showed no pathologic events and the patient was discharged on 8th postoperative day.

The horseshoe kidney is probably the most common of all renal fusion anomalies, occurring in approximately one in four hundred of the population [3]. In the embryo, the kidneys develop from a single metanephros on each side caudally. They ascend and rotate to what will be their normal adult position by birth. Failure of the metanephros to separate into two kidneys may be complete or partial, resulting in a horseshoe kidney [4]. As described above concomitance of aortoiliac occlusive disease and horseshoe kidney compared to abdominal aortic aneurysm and horseshoe kidney is very rare. This rarity has limited the development of a standardized approach for diagnosis and treatment. In regards to management of coexistent aortoiliac occlusive disease and horseshoe kidney, preoperative diagnosis and operative strategy are two important issues will be discussed respectively.

Magnetic resonance angiography (MRA) is the most accurate preoperative diagnostic tool that, if properly performed and interpreted, is sufficient for the planning of bypass procedures in vascular surgery [5]. On the other hand and to our knowledge the CT scan is an extremely sensitive method of identifying a horseshoe kidney and related abnormalities including accessory arteries and collecting systems. Since CT is not a routine preoperative diagnostic tool for aorto-iliac occlusive disease, the only case of Shortell et al. [1] was missed preoperatively and similar to our patient, the coexistence of a horseshoe kidney in the only case of Wymenga et al. [6] was recognized by accident just before the operation. However, it is not reasonable to obtain CT scans and MRA in patients with aorto-iliac occlusive disease to detect a very rare combination. In our case DSA alone, which was obtained by casualty surgeons, demonstrated all relevant accessory renal arteries (Figure 1). However, MRA seems to be more accurate (Figure 2). In our opinion a properly interpreted MRA not only identifies the accessory renal arteries but indirectly would lead the surgeon to recognize a horseshoe kidney and to perform further diagnosis e.g. CT and intravenous pyelography (IVP). However, failure of arteriography to detect arterial anomalies in 40% to 60% of cases have been reported [7-9]. IVP should be performed to visualize the course of ureters and the pattern of the caliceal system. Furthermore, in horseshoe kidney, the ureters characteristically cross the symphysis anteriorly and lie more medially than usual, before entering the pelvis. Because of this ureteral displacement the posterior position of the limbs of the graft with regard to the ureters will not give problems. Nevertheless, we obtained IVP postoperatively to rule out a possibility of compression of the ureters by the limbs of the graft (Figure 3).

The second important aspect with regard to the management of coexistent aortoiliac occlusive disease and horseshoe kidney concerns the preferred operative strategy. Due to exposure of the aorta and anomalous renal arteries and especially in the presence of occlusive disease, the aorta was approached transperitoneally. In patients in whom the atherosclerotic lesions have occluded the external iliac arteries bilaterally, transection of the proximal aorta, for purposes of performing end-to-end anastomosis, may devascularize the pelvis since no retrograde flow up the external iliac arteries from the level of the femoral anastomoses can occur. This potentially increases the risk of impotence, ischemic colitis, buttock ischemia, persistent hip claudication, and even paraplegia secondary to spinal cord ischemia. We therefore used end-to-side proximal anastomosis above the level of the accessory renal arteries (Figure 2), because we believe in such circumstances an end-to-side anastomosis allows continued native perfusion of the specific vessels without jeopardizing the horseshoe kidney and its blood supply while the graft bypasses the aortoiliac occlusive disease. The transperitoneal approach allows for optimal achievement of this goal. 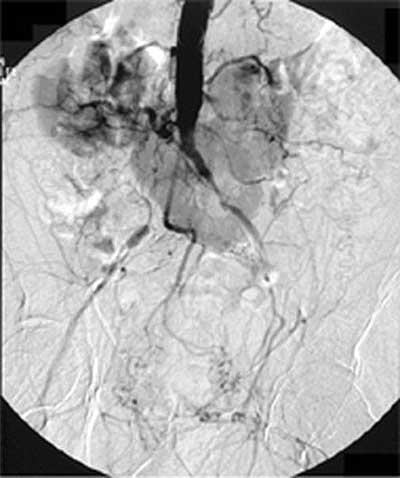 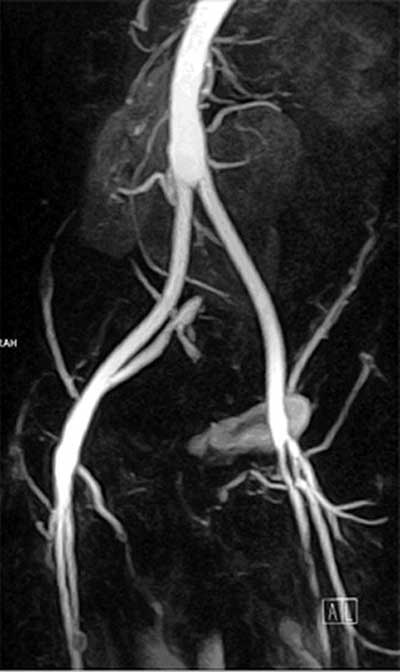 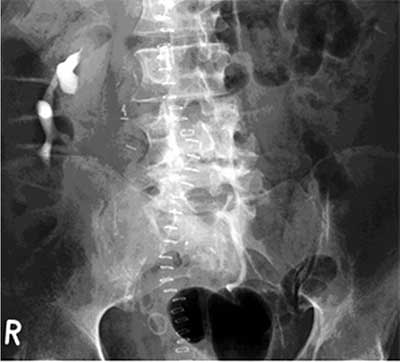