EXPERIENCE THE OF SERVICE

Introduction: The Caribbean is a multi-ethnic society, including Caucasian, Afro-Caribbean, East Indians, Asians, Hispanics, European and natives, which has a broad range of living standards. The incidence and types of heart diseases vary significantly amongst these races. We report the surgical experience (adult and paediatric) of a low volume multiethnic population service based on Trinidad and Tobago. Methods: The Adult Heart Surgery program started in November 1993. The data on a total of 878 cases (629 male, median age 67, range 18-88 years old) is reported. Of these 39.4% were diabetics and 46.5% hypertensive. The procedures performed include coronary artery bypass grafting, valve repair and replacement, and major aortic surgery including emergency dissection. The paediatric heart surgery program started in Sept 1998 and a total of 279 operations have been performed (Age range, 2 weeks to 21 years) Results: Adult - Overall mortality was 3.8%. The majority of procedures were CABG (82.3%) with an overall mortality of 2.8% (0% in 2004). Off pump CABG accounts for 43% of the total procedures (71.2% in 2004). Aortic valve surgery was carried out in 49 patients and mitral valve replacement/ repair in 96 either with or without CABG. Paediatric - The majority of the procedures were VSD 111, ASD 57, TOF 23, and 88 others (including A-V canal, BT shunt, aorta coarctation) with an overall mortality of 1.5%. Conclusion: Heart surgery in a multiethnic low volume service can be performed with excellent results comparable to international standards for adults and paediatrics.

The English speaking Caribbean is a multi-ethnic society with different cultures, religions, and lifestyles. This multi-racial society includes Caucasian, Afro-Caribbean, East Indians, Asians, Hispanics, Europeans and original natives with a broad range of living standards. The Central Statistical Office of Trinidad and Tobago (T & T) last census (2000) reported a total population of 1,262,400 inhabitants with an average 0.7% annual growth rate, with 40% East Indian descendants, 37% African, 20% mixed, 0.6% Caucasian and 0.3% Chinese [1]. The incidence and types of heart diseases varies significantly amongst these races.

Historically people requiring cardiac surgery had to travel to Florida or to the United Kingdom. In 1993 an adult heart surgical program was started in Trinidad and Tobago with the aim of providing a service to the whole of the Caribbean. The volume of surgery was predominantly low since the surgery was private in nature. We were therefore faced with the challenge of sustaining such a program as well as achieving international standards [2].

The general consensus in the literature is that a certain minimal volume of surgery is needed to be performed, by individual surgeons or institutions, in order to obtain good quality results [3-7]. In a study on 120 cardiac surgery programs in California, it was shown that the unadjusted mortality for CABG surgery was 3.91% (923 of 23,619) in hospitals performing fewer than 200 procedures per year and 2.09% (496 of 23,704) in hospitals performing more than or equal to 500 procedures per year. Risk adjusted data on CABG showed a vast disparity between hospital volumes of less than 200 and more than 200 procedures per year. However, in this study there were many low volume hospitals with excellent results [2].

We present here a retrospective analysis on prospectively collected data which summarizes the whole Caribbean Heart Care experience with regards to the adult as well as the paediatric program of a low volume multi-ethnic population service based in Trinidad and Tobago (Fig. 1).

Prospectively collected data were retrospectively analysed. Clinical data were collected on 1157 patients who underwent cardiac surgical procedures at two hospitals in Trinidad and Tobago under the same program, between November 1993 and December 2004. The paediatric program was started in September 1998.

Figure 2 shows the volume of surgery performed on the adult and paediatric population.

Of the adults 65% were East Indian, 12% were Afro-Caribbean and 23% were mixed. Of these 39.4% were diabetics and 46.5% hypertensive. The adult procedures included CABG, valve repair and replacement, and major aortic surgery including emergency aortic dissection.

The number of procedures remained around 70-80 per year until 2003 when the government of Trinidad and Tobago started to finance 120 cases per year. The majority of the procedures were coronary artery bypass surgery (82.2%) with a mean of 2.6 ± 0.8 grafts per patient. Aortic valve surgery was carried out in 49 patients (6.8%) and mitral valve replacement / repair in 96 (10.9%) with or without CABG. Of the mitral valve surgery about 50% of them were repaired.

Other procedures (4.1%) included removal of myxoma, major aortic surgery, root and arch, and also acute dissection of the ascending aorta.

The paediatric program was started in September 1998 and by December 2004, 279 operations had been performed. The predominant procedures were correction of straightforward congenital heart defects, but also a significant number of other complex procedures (Table I). The overall paediatric mortality was 1.1%.

This study is a retrospective analysis of prospectively collected data, the experience of a single low volume centre in a multi-ethnic society in the English-speaking Caribbean. The data shows excellent results with a low mortality in line with that of international centres. Reports in the literature have often criticised low volume cardiac institutions and surgeons as being unable to produce good results. Evidence does exist that there is higher mortality for certain conditions in low volume hospitals [5]. However other studies show that as the surgical risk increases the patient is more likely to have surgery at a low volume hospital [6].

We can only speculate about the reason for our results:

ii) the visiting surgeons, although they do not perform individually a large number of procedures in Trinidad, are all heading units in their own countries, where they would be performing 200 or more procedures per year.

Few studies have looked at the association between race and the results after CABG, while controlling patient and hospital effects as well as the prevalence of cardiovascular disease in some ethnic groups due to risk factors contributed by cultural practices and values [8,9]. As our institution's number of procedures is increasing, this may give us the opportunity in the future to answer this question in our multicultural, multiracial environment. 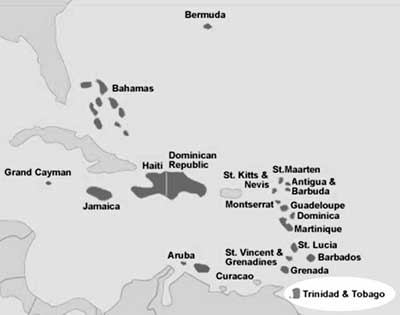 The experience of our low volume multi-ethnic centre demonstrates that it is possible to achieve results comparable to international standards. We believe this is predominantly due to the high level of senior professionals involved in the program which results in a high level of patient care.