OBJECTIVE:To report the surgical results obtained with the surgical correction of fistulae of coronary arteries in the pulmonary artery branch. METHOD: From 1995 to 1999, three female patients with diagnoses of isolated fistulae of coronary arteries confirmed by cinecoronariography underwent surgery. RESULTS: No other associated heart diseases were observed in the patients. The main symptom of all patients was angina pectoris. After closing the coronary fistulae the patients progressed with event-free post-operative periods and with total recovery from the angina. CONCLUSION: Surgical treatment should be considered for all patients diagnosed as having isolated fistulae, due to the low morbid-mortality rate in addition to the technical simplicity of closing and performing the ligature of fistulae.

Coronary artery fistulae are a rare form of congenital heart disease, which can cause a communication between one or more coronary arteries with heart chambers, coronary sinus, arteries and pulmonary veins [1].

KRAUSE [2] in 1865 was the first to describe the disease in a case of accessory coronary artery, which drained to the pulmonary vein, and since then more than 400 cases have been reported in publications [3,4]. However, with improvements in diagnostic techniques and investigation into heart disease, the incidence of this disease is probably greater. Currently, the incidence is considered to be 1:50,000 congenital heart disease live births and 1:500 submitted to cinecoronariography [4-6].

Coronary artery fistulae can occur in isolation or associated with other heart defects. Isolated fistulae of the right and left coronary arteries commonly finish on the right side of the heart and, less frequently finish on the left side. This latter case does not represent a true arterio-venous "shunt", although presents the same physiological effect of coronary outflow [7].

The development of these anomalies is generally benign in children, although with the advance of age, some significant complications can occur, such as: early atherosclerosis, myocardial ischemia, congestive heart disease, ventricular arrhythmia, sudden death and coronary artery aneurysms [8,9].

FERNANDES et al. [10] revealed that young patients are generally asymptomatic and the severity of the symptoms is proportional to the size of the "shunt". These patients, when investigated, normally, present with coronary arteries free from obstructive processes and the fistulae are found only by chance [14].

In the period from 1995 to 1999, three female patients with ages varying from 47 to 52 years old and with diagnoses of coronary arterial fistulae, were submitted to surgical treatment.

In this series, the patients presented with a precordial pain suggestive of pectoris angina as the main symptom, which strongly suggested the presence of obstructive atherosclerotic disease of the coronary arteries. The principal signs and symptoms found are shown in Table 1. 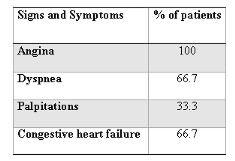 The clinical investigation showed that all the patients had positive results in the physical stress test for myocardial ischemia.

A simple thoracic X-ray evidenced an increase in the cardiac volume and pulmonary vascular trauma in two of the patients but in one it was normal. The diagnosis was confirmed by cinecoronariography. 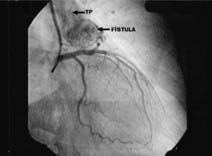 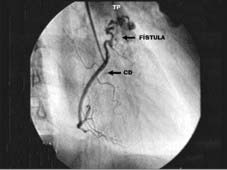 All the patients underwent surgical treatment. The approach was by median sternotomy using cardiopulmonary bypass with a venous drain by a single two-part catheter. After aortic clamping, myocardial protection was achieved using St Thomas type anterograde cardioplegia through an aortic puncture and moderate hypothermia (34 ºC).

In all cases pulmonary arteriotomy and closure of the fistulae drainage ostia were performed. Ligature of the abnormal vessels, which were the origin of the shunts was only possible in two of the patients. In the other case, the vessels that gave origin to the fistulae presented with a plexiform network which drained into a single orifice above the pulmonary valvular level (Table 2).

The total cardiopulmonary bypass time ranged from 35 to 60 minutes.

None of the three patients presented with significant hemodynamic events or complications in the immediate post-operative period.

Electrocardiographic alterations suggestive of myocardial ischemia, a common sign when any coronary branch is obstructed, were not evidenced in this study. The CPK and CKMB-type cardiac enzymes remained at accepted levels for the post-operative period of operations involving coronary arteries.

All the patients were released from the post-operative recovery unit on the third post-operative day and the total hospital stay was from 6 to 8 days.

No hospital mortality was experienced. The cinecoronariography and echocardiogram performed before hospital release revealed the absence of fistulous channels or residual shunts (Figures 2A and 2B). 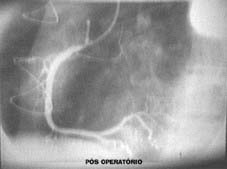 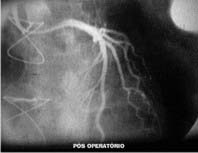 Fig. 2B - Post-operative angiography of the left coronary artery fistula to the pulmonary branch.

The outpatient follow-up of these patients, on average was 14 months, showed excellent evolution with the patients remaining asymptomatic, free of angina.

Coronary artery fistulae normally have indications for surgical treatment, even though approximately 50% of the carriers of isolated fistulae are asymptomatic [11,12,15].

The presence of left-right shunts can occasionally lead to the appearance of congestive heart failure, acute myocardial infarction, bacterial endocarditis, formation and rupture of aneurysm and sudden death [13,16-19]. The incidence of these complications increases proportionally with the age of the patients [3,7,12].

The occurrence of angina reported in this series of patients is mainly due to the phenomenon known as coronary outflow, in which there is a clear divergence of coronary flow to the right and/or left chambers. The description in the literature of four patients with angina during exertion [20] and an experimental study in dogs performed by MURAD NETO et al. [14], employing techniques with radioisotopes which proved myocardial ischemia, provide strong evidence that coronary outflow effectively occurs.

Various techniques and surgical tactics for the closure of fistulae have been proposed since the first successful surgery described by BIÖRCK & CRAFOORD in 1947 [21].

The surgical treatment mainly aims at closing the fistulae, correcting the shunt and maintaining the normal coronary flow, preventing the appearance of complications [22].

The use of cardiopulmonary bypass is recommended for the safer surgical treatment of coronary artery fistulae, both for the epicardial ligature and for the closure of intra-chamber drainage ostia [3,15,23]. Although the epicardial ligature performed on the beating heart, without the use of cardiopulmonary bypass, reduces operative risk [22], the use of suture stabilizers might be a safe option in single, easily accessible fistulae with their drainage ostia well defined by cinecoronariography [22].

The percutaneous closure of fistulae by catheter using embolization or coil might be a treatment option, but this is still under development. Although this treatment has been used in a small and restricted group of patients, there are no studies comparing the results that can guide percutaneous treatment [23-25].

The surgical correction of coronary artery fistulae should be indicated as soon as fistulae are diagnosed in order to treat and prevent the complications of arterio-venous shunts because of the low hospital morbid-mortality rate associated with the procedure.