OBJECTIVE: The purpose of our paper was clinical and echocardiographic characterisation of patients with cardiac tumours and the evaluation of the surgery and tumour recurrence. METHOD: The first part of research was a retrospective investigation to identify cardiac tumours identification and to collect data from patients' records of the Messejana Hospital and Walter Cantídio University Hospital, from 1981 to 2001. In this period, 19 cases of cardiac tumours were discovered. The patients were submitted to clinical, electrocardiographic and echocardiographic re-evaluation from March to July 2002. RESULTS: Congestive symptoms and thoracic pain were the most frequent symptoms. The location in which most of the tumours were identified was left atrium. Among patients submitted to surgery, all of them had the tumour extracted from atrium. The most common histopathologic type was myxoma (78%). Surgical mortality was 14%. Tumour recurrence occurred in one patient. CONCLUSION: Cardiac tumours were more frequent in left atrium, benign tumours were more frequent than malignant tumours, and the most frequent histopathologic type was myxoma.

Cardiac tumours are rare. In findings from autopsies, while a frequency of 1% for secondary tumours is observed, this incidence drops to 0.056% in respect to primary tumours [1].

Cardiac catheterism can also demonstrate the presence of a tumour. Coronary cineangiography can be useful in the evaluation of atrial myxomas by demonstrating the vascular `blush' in the tumour.

Benign tumours constitute the majority of cardiac tumours and among them, the most common is the myxoma [6]. A Chinese study demonstrated the presence of 50% of myxomas in all tumours discovered, with lipoma the second most common benign tumour evidenced. This study determined an incidence of 21% of malignant tumours, with angiosarcoma and rhabdomyosarcoma being the most common [7]. In 95% of the cases the myxomas appear in left chambers, although a case of a myxoma obstructing the outlet of the right ventricle has been reported [8]. Contrary to benign tumours, malignant tumours, in particular the angiosarcomas present a short and fatal evolution [9].

In relation to complications caused by cardiac tumours, ischemic stroke [10], pulmonary emboli [11] and myocardial infarction [12] have been reported.

The aims of this work are to characterise patients with tumours, both clinically and using ECG, to evaluate the morbid-mortality of this disease, to evaluate the surgical procedure and to investigate reoccurrence of tumours.

In the initial phase of the research, a retrospective methodological delimitation was performed, by the identification of cardiac tumour cases and the collection of data. An investigation of patients' records from the Walter Cantidio Teaching Hospital of the Federal University of Ceara and the Messejana Hospital of the Health Department of the State of Ceara, Brazil during the period from 1981 to 2001 was made. A total of 19 cases of cardiac tumours were found, of which 6 patients (31.58%) were male and 13 (68.42%) were female with ages ranging from 50 days to 70 years (mean of 40.52 years and a median of 46 years).

A cardiac tumour was considered present if an intracardiac mass with the specific characteristics of this disease was seen either during two echocardiographic examinations or on one ECG and by cardiac catheterism. Confirmation was by surgery or necropsy. The patients were submitted to clinical, echocardiograph and electrocardiograph re-evaluations during the period from March until July 2002 by means of an investigation of the patients' records, subsequent consultations and return visits to the physician.

The ECG employed at the start of the 1960s utilised only the M mode with the 2-dimensional mode being used from 1984 onwards. As the transoesophageal ECG was not available in our department, this technique was not used for the initial diagnosis of the tumours, but it was later used to confirm a reoccurrence of one tumour seven years after resection.

The research protocol was approved by the research ethics committee of the Walter Cantidio Teaching Hospital.

The time of evolution until diagnosis varied from 48 days until 10 years, with a mean of 39 months and a median of 10 months. Systemic, cardiac and embolic symptoms were evidenced as demonstrated in Table 1. 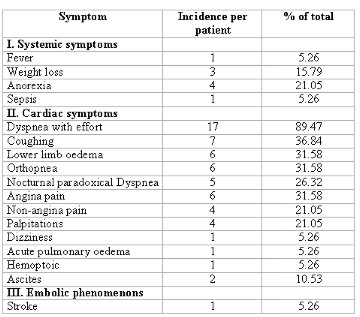 The most prevalent signs were paleness and jugular turgidity as is shown on Table 2. The cardiac auscultation was abnormal in 73.68% of the patients of which the most common alteration was mitral systolic murmur (36.84%). Also alterations in the noise and the rhythm were evidenced as demonstrated in Table 3.

Table 2. Most prevalent signs in patients with cardiac tumours 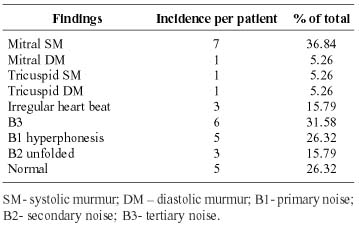 The pre-operative ECG was analysed in all patients and revealed an increase in the heart chambers in 72.2% of the individuals, with an overload of the right ventricle being the most common finding (33.3%). Atrial fibrillation was observed in 11% of the patients and conduction disorders in 27% (Table 4). The ECG was performed in 18 patients, in two only using the M mode, which was the only available technique at the time of the examination. In one of them, the presence of the tumour was not evidenced but was later observed by cardiac catheterism. The most frequent site of the tumours was in the left ventricle (66.6% of the cases). Other findings were evidenced such as hypertrophy of the chambers and pulmonary hypertension (16.67%) as illustrated in Table 5. 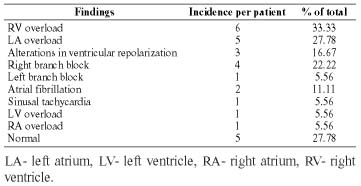 Ten of the patients (52.6%) were submitted to catheterism with one mortality during the examination. In one of the patients, the tumour was not detected by catheterism, but two future ECGs demonstrated the tumour and the patient was submitted to surgery with the resection of a tumour from the left atrium. Pulmonary hypertension was present in half of the study group (Table 6). Another patient presented with acute pulmonary oedema and died before being considered for operation.

Among the 17 surviving patients, surgery was performed in 14 and refused by three. Tumours were resected from the left atrium in 11 (78.57%) of the cases, and from the right atrium in 3 (21.42%). In one patient with a tumour in the right atrium, infiltration was evidenced in the vena cava during surgery. Some associated procedures were performed, such as mitral plasty (14.28%), tricuspid plasty (7.14%) and valve replacement using a bioprosthesis (7.14%).

Histopathologic diagnoses of lesions were carried out in nine patients and found compatible with benign tumours in seven cases (77.78%), all of which were myxoma. Two malignant tumours were also diagnosed, one myxosarcoma (11.11%) and the other thymoma (11.11%).

The observed evolution in the 14 patients submitted to surgeries included two patient deaths (14.29%), one due to cardiac shock in the immediate post-operative period and the other during surgery; one patient suffered reoccurrence of the tumour. Other events evidenced during the long-term post-operative period were angina in one, left branch occlusion in one, congestive heart failure in two, arterial hypertension in two and arrhythmia in one patient. Of the three patients who refused surgery, one suffered from persistent anginose pain and the other two did not return for check ups.

The majority of patients with cardiac tumours in our study were female in agreement with published reports [13,14]. The age range was very variable, from 50 days to 70 years which is again similar to other studies [13] but the mean age found in our investigation of 40 years was a little lower than that found in French studies [14].

Congestion and abdominal pain were the most common symptoms seen in our studies similar to what was reported by Mirales et al. [14]. These authors observed neurologic symptoms in 17% of their patients whereas we evidenced neurological disturbances in only 5% of ours.

The most common location of the cardiac tumours in our investigation, observed using ECG and cardiac catheterism, was the left atrium in 66% of the cases. Blondeau [13] identified the left atrium as the affected chamber in 83% of the cases of myxoma. Among the patients who underwent operations, all had the tumour resected from the atria, predominantly from the left atrium (79% of the cases). Using ECG it is possible to analyse the site of the tumour, fixation type, growth type, its limits, its echocardiographic texture, echogenic status, shape, nucleus of growth, dimensions, dynamic aspects and the hemodynamic repercussions of the tumour mass, which enables characterisation with the minimum utilisation of invasive methods [15].

The most common histopathologic type of tumour discovered in our series, myxoma, was observed in 78% of the patients, corresponding to 100% of the benign tumours found. This frequency is similar to that reported by Blondeau [13], but Meng et al. [7] detected only 50% of myxoma in the total tumours found. We must emphasise the finding of a thymoma, which is a rare malignant tumour in the heart.

Surgical mortality seen in our series (14%) was high when compared to a French series that presented a mortality rate of less than 1% [13]. In a Brazilian study of 15 cases operated for myxoma, a survival rate of 93% in the first 6 post-operative months was reported [16].

Reoccurrence of tumours was evidenced in only one patient where the histologic type was myxoma. Basically, there are two mechanisms, which explain relapse of cardiac tumours: the first is inadequate resection of the tumour and the second is the presence of a multifocal disease. In the latter case the tumour appears in a different heart chamber each time, has a familiar tendency and pigmented skin lesions emerge. This is denominated as the Carney Syndrome [17,18]. In our case of recurrence, a tumour was found in the same heart chamber on both occasions, in this case the left atrium, which suggests that there was inadequate resection of its first appearance.