Lipoma resection of the interventricular septum

We report the case of an asymptomatic 43-year-old-man with a lipoma of the interventricular septum. Diagnosis was established during routine medical examination by 2-dimensional echocardiography and confirmed by computed tomography and magnetic resonance imaging. The patient underwent successful resection of the tumor.

Cardiac lipomas are encapsulated tumors composed of mature fat cells. They are true neoplasms and should be differentiated from hypertrophic lipomatosis of the interatrial septum, in which there is deposition of non-encapsulated mature and fetal adipose tissue [3].

Lipomas of the heart can be epimyocardial, intracavitary or intramyocardial and may be located in the atria or ventricles.

In this paper, we reported a rare case of surgical resection of intramyocardial lipoma located in the interventricular septum.

Male patient, 43 years old, asymptomatic, sedentary life, decided to do a cardiac evaluation considering the intention of going for walks. Taking into account the history of this patient, there was reference to the lipoma resection in the left arm at the age of 7. The physical examination was normal. Chest X-ray showed normal sized cardiac silhouette. Electrocardiogram revealed diffuse changes in ventricular repolarization. Echocardiogram showed a mass located in the basal interventricular septum, measuring 3.2 x 2.2 cm, which did compromise neither the cardiac dynamics nor the intracavitary flows. Chest computed tomography confirmed the existence of a hypodense mass, measuring 4.5 x4, 0x4, 0 cm in its largest diameter, affecting the topography of the interventricular septum. Magnetic resonance angiography of the heart was carried out, which confirmed the presence of a mass with irregular borders and defined limits, surrounded by a fibrous capsule measuring 38 x 35 mm, located in the mid-basal portion of the interventricular septum. The images of tissue characterization suggested that the mass was consisted of adipose tissue. It was then surgery indicated. The patient was also submitted to hemodynamic study and coronary angiography. The intracavitary pressures were normal, with no significant obstacle observed to ventricular ejection. The coronary arteries were free of obstructive process.

The patient was referred to our clinic for surgical treatment, and surgery was performed via median sternotomy with conventional extracorporeal circulation, and myocardial protection through the aortic root infusion of cold cardioplegic solution and topical hypothermia of the heart. Longitudinal right ventriculotomy was performed. It was possible to note a yellowish mass embedded in the interventricular septum. The muscular septum was longitudinally incised (Figure 1), and the tumor was completely resected (Figure 2). The muscular septum and the right ventriculotomy were restored with continuous prolene 5-0 sutures. In the postoperative period, the patient had excessive bleeding and was submitted to surgical reexploration. There were two small bleeding spots in the ventriculotomy, which were sutured. The patient recovered with no intercurrence and was discharged on the seventh day, showing no symptoms and without medication. 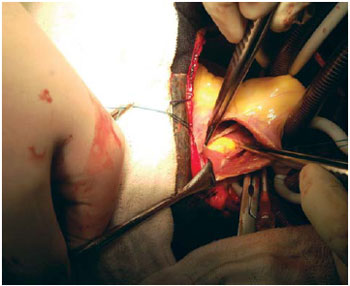 Fig. 1 - Surgical aspect showing the right ventricle opened and the lipoma being resected after incision in the muscular part of the interventricular septum 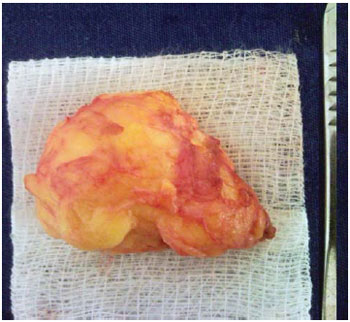 The anatomopathological examination confirmed that it was a lipoma, measuring 5x4x3, 2 cm, encapsulated and composed of mature adipose tissue.

Lipomas of the heart are very rare tumors. Albers was responsible for the first report in 1856, and about 60 cases had been reported until 1995 [4]. Among us, in a series of 50 cases of primary cardiac tumors, clinically and histologically studied by Fernandes et al. [5], there was only one case of lipoma. The 4 other cases were described in the national literature [6-9].

Lipomas occur at any age and the frequency is equal in both genders. Symptoms vary and may include manifestations of heart failure, arrhythmia and syncope. Our patient was asymptomatic, and an example of how the development of modern technology has resulted in more frequent and accurate diagnosis of cardiac tumors.

The diagnosis of cardiac lipoma can be established by bidimensional echocardiography, computed tomography and magnetic resonance imaging (MRI). MRI is particularly useful because it allows the characterization of the tissue. Hemodynamic study and coronary angiography are unnecessary in most cases. In our patient, these tests were performed due to age (43 years old), because the electrocardiogram showed ventricular repolarization alterations.

All cardiac tumors are potentially lethal due to their possibility of producing obstruction, embolism and rhythm disturbances. The security techniques in extracorporeal circulation and myocardial protection are responsible for safer tumors resection of the heart. Thus, all heart tumors have indication for surgery, even in asymptomatic patients.

The manner to address the tumor depends on its size and location. In our case, there was the possibility to deal with the tumor through either right atriotomy or right ventriculotomy. The second option was chosen, because its approach would be more comfortable and safe through the right ventricle, taking into consideration the tumor's size.

The tumors excision generally results in cure of patients and excellent late prognosis.