A 13-year-old male was admitted to undergoing correction of a pulmonary venous baffle stenosis (PVBS) after a modified Senning procedure was performed by the age of five months. Recurrent Pulmonary congestion and pneumonia episodes were followed by echocardiography and cardiac catheterization that confirmed PVBS. Previous catheter balloon angioplasty was attempted, and a surgical revision was done under cardiopulmonary bypass. The bovine pericardial patch used for augmentation of the right atrium, retracted and calcified producing PVBS. Stenotic area was excised and enlargement was done with polytetrafluoroethylene membrane. Intraoperative transesophageal echocardiogram showed relief of stenosis.

After a modified Senning operation, the relative frequency of pulmonary venous baffle stenosis (PVBS) range from 1.9% to 7.6%. It is defined by the presence of a cardiac catheterization gradient greater than 5 mmHg [1,2]. Surgical correction, however, was necessary in only 2.5% [1] and 3% of the patients [2].

Balloon angioplasty is an option for initial treatment, although a surgical correction presents satisfactory results and low mortality [2]. We present a case of surgically treated PVBS.

In the neonatal period, a diagnosis of juxtaposition of the auricles of atria, D-transposition of the great arteries (D-TGA) with ventricular septal defect (interventricular communication), restrictive ventricular septal defect (interventricular communication), and stenosis of the left ventricular outflow was made. Next, a balloon atrial septostomy (balloon atrioseptostomy) was performed. At 6 months of age, he underwent a modified Senning operation with right atrial enlargement, small, with bovine pericardium membrane. The interventricular communication closed with bovine pericardium membrane and a myectomy of the left ventricle was performed for the correction of subpulmonary stenosis. Pulmonary congestion and recurrent episodes of pneumonia appeared three months after surgery and were clinically treated with an anticongestive drug therapy. At 2 years of age, He performed a cardiac catheterization and a selective manometry. The pressures inside the baffle of the pulmonary veins showed a mean gradient of 10 mmHg. A balloon (15 x 40 mm) angioplasty of the baffle supported by a guide was attempted, performing manual inflation until the disappearance of the waist. The procedure was unsuccessful. The mean gradient inside the baffle remained at 10 mmHg. Due to socioeconomic problems, the child returned at the age of 13, and a new cardiac catheterization showed PVBS with a mean gradient of 9 mmHg.

The intraoperative transesophageal echocardiography revealed stenosis of the baffle with a maximum and mean gradient of 21 mmHg and 12 mmHg, respectively (Figure 1). The right ventricle was moderately hypertrophic and dilated, but with mild apical hypokinesia. 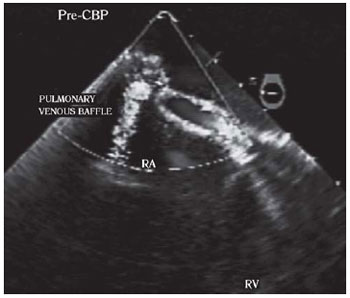 The heart was exposed through a median thoracotomy. The cardiopulmonary bypass support was installed at 28°C with bicaval cannulation and antegrade intermittent blood cardioplegia (at every 25 min).

The bovine pericardium used to augmentation of the right atrium to build the baffle of the pulmonary veins showed retraction and calcification causing stenosis and obstruction in the middle third of the right ventricle.

The pericardium was completely resected, and the pulmonary veins were exposed showing no obstruction. A large plate of PTFE (polytetrafluoroethylene), constructed with an 18 mm-tubular graft (GoreTex, WL Gore & Associates, Inc.) was sutured with 5-0 polypropylene thread (Figure 2). 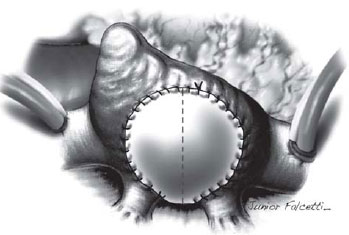 The postoperative transesophageal echocardiography showed significant improvement of the stenosis with a maximum and mean gradient of 11 mmHg and 5 mmHg, respectively, with a flow velocity on Doppler color flow of 1.1 m/s (Figure 3). 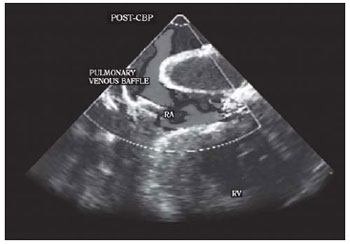 The patient was extubated in the immediate postoperative period and received, which was discontinued on postoperative day 3. The patient developed atrial tachyarrhythmia refractory to amiodarone, which required electrical cardioversion with 20 J, that was successfully. He had pneumonia with pleural effusion treated with tazobactam, and a chest tube was used. He was discharged on postoperative day 14, asymptomatic, and in sinus rhythm.

The Senning operation continues to be indicated for complex cases of transposition of the great arteries, which are not susceptible to anatomic correction (Jatene operation) [3]. Some modifications of the Senning operation were proposed to increase both the atrial septal flap [4] and pulmonary veins [5] with pericardium, or PTFE in selected cases. In our case, the pericardium was employed to increase the right atrium (pulmonary venous baffle). The calcification and retraction of the right atrium caused the stenosis of the baffle. The juxtaposition of the auricles of the atria and the small right atrium could also have contributed for the baffle stenosis, as described by other authors [3]. Due to this, the use of the bovine pericardium should be avoided in the manufacture of baffles in the modified Senning.

An alternative would be the use of autologous pericardium or polytetrafluoroethylene membranes, which have a lower risk of calcification. The correction of PVBS is important, because it causes a decrease in left ventricular filling and may contribute to low cardiac output and sudden death in the presence of ventricular tachycardia [2]. Interventions with both hybrid catheterization and surgery have been reported, trying to offer an attractive and effective alternative for the treatment of PVBS [6], although balloon angioplasty of the tunnel cannot be performed in cases with acute calcification of the bovine pericardium.

Thus, when balloon angioplasty fails to correct the stenosis, surgical treatment is mandatory. In this case, we have chosen to use a PTFE graft due to the lower risk of inflammation and scar retraction.

We thank to Falcetti Junior, who made the illustration.