The postoperative complications in cardiac surgery are still frequent, despite the development of minimally invasive techniques and improvement of care given to patients [1,2]. Complications included pulmonary, present in up to 70% of cases are defined as an abnormality that occurs in the postoperative period, which produces significant dysfunction, affecting the clinical outcome [3,4].

The most common respiratory complications are atelectasis (24.7%), pneumonia, hypoxemia and pleural effusion (47.5%). Physiotherapy has its established role in prevention and treatment of complications and intervening early aiming at recovering lung function, encourage physical activity and consequently improve the patient's quality of life [3,4].

During the period October 2008 to October 2009 were evaluated 76 individuals. Of these, two patients were excluded due to unstable angina, three patients had their surgeries suspended and eight died postoperatively, participating 63 subjects. Among patients who died, two suffered pulmonary complications, two, neurological, two deaths occurred in the operating room and two for postoperative cardiac dysfunction.

The study was approved by a Human Research Ethics Committee, under protocol 221/2007.

Patients referred to the service of Cardiac Surgery of the Ministro Costa Cavalcanti Hospital who underwent CABG, valve replacement, aneurysm repair and atrial septal defect were included. Of these, were excluded emergency surgery, patients with unstable angina and who were not in physical or cognitive conditions for the tests.

The preoperative evaluation was performed on the day of surgery by a hospital physiotherapist, who was also responsible for implementing the guidelines on the surgical procedure and postoperative period. This included an interview, which aimed to identify key risk factors, then the evaluation of measures of respiratory muscle strength and peak flow.

Tests of respiratory muscle strength were performed with the patient positioned sitting with the inferior limbs pending and feet resting. The nostrils were occluded with a nose clip and the nozzle of the equipment attached to the mouth.

Maximum inspiratory pressure (MIP) was measured starting at 2-3 breaths at tidal volume with the hole open, and requested a breath as complete as possible until residual volume (RV), and the patient instructed to notify this time to then request a maximal inspiration with the hole occluded until the total lung capacity (TLC), where the individual should remain firmly supported by 2 seconds [7].

To evaluate the muscle expiratory pressure (MEP), the patient was instructed to breath at tidal volume and was requested a deep breath until TLC, warning the appraiser such moment, with the hole occluded to perform a maximum expiration at the level of RV, which should be sustained for 2 seconds [7].

Both maneuvers were repeated three times, with interval freely performed by the patient and recorded the best measure. For the calculation of the projected pressure was used the equations proposed by Neder et al. [8].

After surgery, patients were followed postoperatively by the multidisciplinary team. The physiotherapy intervention was performed twice daily for a period of approximately 20 minutes, following the standard protocol of postoperative cardiac surgery of the hospital.

During the time of hospital stay, patients were evaluated daily by the multidisciplinary team in order to identify the postoperative respiratory complications, which were recorded by the physiotherapist in a specific form.

The determination of postoperative respiratory complications were based on study of Hulzebos et al. [9], which took into account the complications presented in Chart 1. 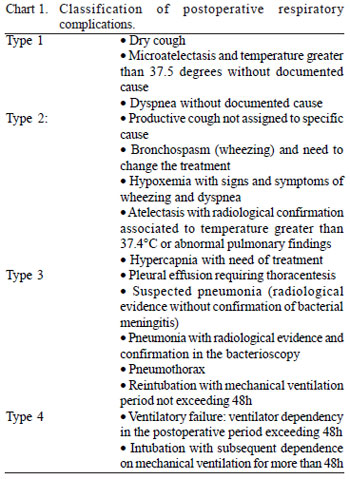 The revaluation was performed at 5 days postoperatively, with the patient already admitted to the ward. If patients were still in the Coronary Care Unit, this was performed later, repeating the same maneuvers performed preoperatively.

For statistical analysis, in order to compare the preoperative respiratory muscle strength with the complications, it was determined in the limit of MIP in 80 cmH20. This value was determined, because the ATS/ERS [10], in the guidelines for pulmonary function testing, affirms that values less than this may be indicative of weakness. With MIP subdivided into higher and lower than - 80 cmH2O, it was performed using the McNemar test, the investigation of the influence of values recorded preoperatively with the complications encountered postoperatively.

For comparison of MEP, the analysis was based on the study of Hulzebos et al. [9], who found that values greater than 75% predicted are positive indicators of decreased complications. 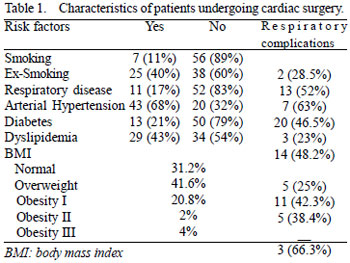 Among the risk factors, former smokers and patients with respiratory disease had higher respiratory complications at 52% and 63% respectively (Table 1).

When analyzed the body mass index (BMI) of these individuals, it was found that 41.6% were overweight, 20.8% presented with grade 1 obesity, obesity grade 2 2% and 4% for obesity grade 3, the remaining individuals (31.2%) had normal BMI. By correlating the pulmonary complications with BMI, we found that 41% presented overweight, while 25% had normal BMI.

When assessing inspiratory muscle strength, the patients had a mean of 106.2 ± 49.4 cmH2O preoperatively and 91.5 ± 52.2 cmH2O in the postoperative, where it is observed a decrease of 11% of preoperative in relation the postoperative, a value statistically significant (P=0.001). In relation to the predicted value using the equation of Neder et al. [8], there were no significant differences between preoperative values and predicted for age, which was on average 101.5 ± 14.5 cm H2O (p = 0.84) (Table 2).

In the comparison of patients with respiratory complications and those who did not, with preoperative MIP and MEP, there was no statistically significant difference (Table 3).

Despite these differences, data from this study are more similar to those found by Feier et al. [11] in 2001-2002 when compared with those collected in 1991-1992, which shows a changing pattern in these patients.

In relation to BMI, there was a greater number of patients with overweight (41.6%), this finding becomes important when analyzing the study by Kajimoto et al. [12], who assessed the 10-year survival of diabetic patients with metabolic syndrome who underwent cardiac surgery and found that the metabolic syndrome regardless of diabetes is a factor of decreased survival of patients.

In another study assessing the ventilatory profile of patients undergoing coronary artery bypass grafting, Morsch et al. [13] also reported similar data with an average BMI of 27, emphasizing that a sedentary lifestyle and obesity are risk factors for these cardiovascular patients.

By linking respiratory muscle strength preoperatively with complications in the postoperative, it seems that this was not statistically significant, which differs from the data found by Hulzebos et al. [9], who analyzed the pulmonary complications based on risk factors preoperatively, considering four main risk factors: age over 70 years, productive cough, smoking in the last eight weeks prior to surgery and diabetes mellitus. Two factors were also considered as protective for pulmonary complications, inspiratory capacity and maximal expiratory pressure, when they were greater than 75% predicted [6].

In this study, when evaluating the risk factors, we found that patients with respiratory diseases and ex-smokers presented the highest frequency of complications, since diabetic patients showed only 23%. This may be due to the possible difference in the profile of the patients, because in the study by Hulzebos et al. [9] were included only CABG, and it was reported the use or not of cardiopulmonary bypass.

In another study, Hulzebos et al. [14] used inspiratory muscle training in order to prevent pulmonary complications in high risk patients undergoing coronary artery bypass grafting. The trained group (140 patients) showed 18% of postoperative complications and the untrained group (139 patients) showed 35% of pulmonary complications, suggesting that the greater inspiratory muscle strength the lower the risk of complications. This result was not found in this study and may be related to the smaller patient number and profile, because in the study were included only patients who underwent CABG.

Fuster et al. [15] evaluated spirometry in 1412 patients undergoing cardiac surgery, of whom 39% had abnormal spirometry, obstructive 368, 127 restrictive and 55 mixed. In patients with obstructive FEV1 <60%, there were more complications, and mortality rate 24.6% vs 1.4%, among other complications with pneumonia, sepsis, prolonged mechanical ventilation and reintubation with a higher incidence in that group [8 ]. In this study, the population with lung disease was relatively small, being only seven (14%) of the sample, but without access to pulmonary function test.

Morsch et al. [13] also found a decrease in respiratory muscle strength postoperatively of 33.7% for MEP and 35.5% for MIP, values less than the values of this study, on which was obtained decrease of 24.7 and 11% respectively. It should be noted that in the study of Morsch et al. [13], only patients undergoing CABG with CPB were assessed, which may have interfered negatively in respiratory muscle strength. The CPB and the lack of ventilation during this period are decisive factors for pulmonary complications, this is probably due to changes in mechanical properties of the respiratory system, resulting from changes in compliance and lung resistance [16,17].

This decrease in muscle strength found in this study is consistent with a study published in 2005 by Ambrozin and Cataneo and [5], which evaluated the parameters of mechanical ventilation of patients in the immediate postoperative period of cardiac surgery and found compliance decreased in most of these, resistance increased in 1/3 of them and gas exchange (PaO2/FiO2) decreased by 50% of individuals assessed. There was no statistical difference between patients with respiratory symptoms, pulmonary disease or smoking, demonstrating that the worsening of mechanical ventilation is related to the surgical procedure [5].

When compared to respiratory muscle strength with the predicted by the equation of Neder et al. [8], there was statistical difference only for MEP data which differ from those of van der Palen et al. [18], who found decreased muscle strength in patients with acute myocardial infarction, considering it as an independent risk factor. One possible reason to explain this finding is that in our studied sample we included patients with valve and aortic disease, which may have a positive effect on the values of respiratory muscle strength.

In another study, Lavietes et al. [19] investigated the respiratory muscle strength in patients with diastolic heart dysfunction and found that these patients had a decrease of this strenght as compared to healthy individuals. In this study, the patient's ventricular function was not assessed.

In the study by Stein et al. [6], patients undergoing cardiac surgery have achieved a MIP predicted in the preoperative period of 60% and 68% for the control and treated group, and a MEP of 82% and 89% respectively. Data that differ from this study, which showed no change in MIP found when compared with the predicted and MEP was found 76.3% of predicted. This may have occurred because of the age of individuals in this study was lower than that of Stein et al. [6], considering that the older the lesser strength found. It is worth noting that in both studies, we used the same reference equation.

Patients who had higher numbers of respiratory complications were those who underwent coronary artery bypass grafting, ex-smokers, with presence of respiratory diseases and increase in body mass index.