Jatene's operation without Lecompte maneuver in child with Taussig-Bing heart

With 25 days of life, he developed fatigue during breastfeeding and mild cyanosis with crying. It was also noticed poor weight gain.

The patient was referred to Cardiopediatrics and after the diagnosis he was treated with furosemide 2 mg/kg/day and digoxin 0.1 ml/kg/day, presenting a slight improvement of symptoms. At 2 months, developed with significant congestive heart failure and need for hospital stay for compensation. In this episode it was indicated operation to correct congenital heart defect.

On preoperative physical examination, he was in good general condition, ruddy, hydrated, presenting tachypnea and cyanosis. The chest was without bulging, non-palpable ictus cordis. Auscultation showed a regular heart rhythm with two sounds, hyperphonetic sound, systolic murmur +/6+ at the left sternal border. Pulmonary auscultation was symmetrical without adventitious sounds. The abdomen was unchanged, extremities with symmetrical pulses and without pressure differences. 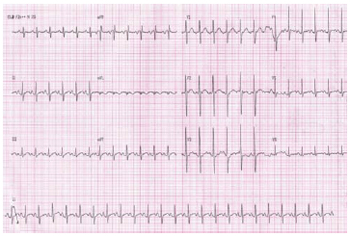 Visceral situs solitus in levocardia, cardiac area in the upper limit of normal for the patient's age, in addition to a slight increase of the second arc of the cardiac silhouette. Mild pulmonary vascular prominence.

Situs solitus in levocardia, concordant venoatrial and atrioventricular shunt. The ventriculoarterial junction was abnormal, with right ventricular double-outflow tract (RVDOT). He presented perimembranous subpulmonary interventricular communication (IC) of 10 mm, characterizing. Taussig-Bing heart. The aortic valve annulus measured 8 mm and pulmonary valve annulus, 13 mm, with the aortic valve to the right of the pulmonary valve and slightly anterior. The aortic arch was hypoplastic and without aortic coarctation. There was also mild dilated left atrium and signs of increased pulmonary flow.

The RVDOT with subpulmonary IC is classically known as the Taussig-Bing heart. The treatment is performed with the arterial inversion (Jatene's operation) and tunneling of the IC, so that the blood of the left ventricle is ejected toward the neoaorta. The IC can be closed by the right atrium, the aorta or the pulmonary, according to the size and position of such defect in relation to the infundibular septum. The position of the great arteries guides to the best surgical technique to be employed, requiring or not the anteriorization of the neopulmonary (Lecompte maneuver). The aortic arch hypoplasia, sometimes associated, should be treated according to need and with the same techniques used for correction of interrupted aortic arch [1,2].

Median transesternal thoracotomy, opening of the pericardial sac and analysis of external anatomy, with the parallel great arteries and aorta slightly anterior to the pulmonary. Confection of circular bag suturing on the aorta near the brachiocephalic trunk using 6-0 polypropylene yarn and in the SVC and IVC with 6-0 polydioxanone yarn. Heparinization with 4 mg/kg and the introduction of cannulas of diameters suitable for the patient's weight (Figure 2). 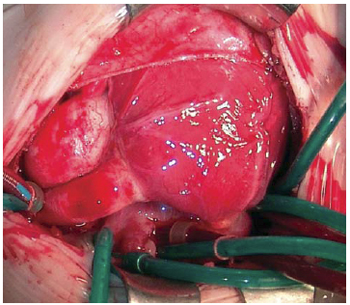 Fig. 2 - Aspect of the parallel great arteries before the start of CPB. It is also noted the great disproportion between the diameters of the aorta and pulmonary artery

The anterior interventricular coronary artery originated from sinus 1 and right coronary and circumflex arteries from sinus 2; the latter presented path posterior to the PT. The coronary ostia were removed and implanted in neoaorta after reconstruction. To avoid twisting of the circumflex coronary artery, the ostium was implanted as distal as possible from the neoaorta root. The neopulmonary was reconstructed using bovine pericardial patches. The operation was completed in a commom manner and peritoneal dialysis catheter (Tenckhoff) was implanted already in the operating room for early use in the Intensive Care Unit (ICU).

The infusion time was 192 minutes and myocardial ischemia, 126 minutes.

In the ICU the patient required peritoneal dialysis for three days, developing well hemodynamically and was discharged on the 14th postoperative day under use of diuretics and angiotensin-converting enzyme inhibitor. The control echocardiogram after one month showed an excellent surgical outcome and hypoplastic aortic arch.