Introduction: To clarify the potential protective role of cilostazol on rat myocardial cells with ischemia-reperfusion injury (IRI) models.
Methods: The study was conducted with three groups of 10 Wistar rats (control group, rats without any coronary ischemia; sham group, rats with coronary ischemia but without cilostazol administration; and cilostazol group, rats with coronary ischemia and cilostazol administration). The level of myocardial injuries was measured by analyzing cardiac troponin T and creatine kinase MB levels in blood samples. In tissue samples, adenosine triphosphate (ATP), nitric oxide, superoxide dismutase (SOD), and malondialdehyde were used to determine the amount of tissue damage. Tissues were stained with hematoxylin-eosin method, and samples were examined under light microscope.
Results: The mean level of ATP was 104.4 in the cilostazol group and 149.1 in the sham group (P=0.044). SOD level was significantly higher in the cilostazol group than in the sham group (2075.3 vs. 1783.7, P=0.043). According to histopathological examination, all samples were classified as G0 in the control group. In the sham group, one sample was categorized as G1, six samples as G2, and three samples as G3. In the cilostazol group, nine samples and one sample were categorized as G1 and G2, respectively (P=0.011).
Conclusion: Cilostazol has beneficial effects on Wistar rats’ myocardial cells in regard to decreasing inflammatory process, necrosis, and fibrosis. Our findings revealed that the use of cilostazol significantly decreased ATP and increased SOD levels in Wistar rats’ myocardial cells after IRI.

The present study was approved by the Vakif Gureba University Ethics Committee, number 2017/115. The study was performed at the Bezmialem Vakif University and involved a total of 30 10-month-old Wistar rats, with an average weight of 300 grams. The Wistar rats were divided into three groups of 10: the control group, the sham group, and the cilostazol group.

After applying ketamine anesthesia to the rats, the heart was revealed with an incision from the left third intercostal space, and the left anterior descending (LAD) coronary artery was determined. The proximal part of LAD was ligated with propylene 7.0. The relevance of LAD ligature was confirmed by the absence of pulse and flow by intraoperative Dopplermetry. The solution of cilostazol was given intraperitoneally as a 20 mg/kg bolus five minutes after coronary ischemia. After the 30-minute ischemia period, ligation was removed, and ischemia was terminated (reperfusion period). Reperfusion was performed for 120 minutes, after which the rats were sacrificed by cervical dislocation. After opening the thorax, intra-aortic blood was removed, and the hearts were excised.

Cardiac tissue was fixed in 10% buffered formalin for one week. After fixation, Wistar rats’ hearts were dissected into 3-mm thick horizontal sections containing both ventricles. Tissues were stained using the hematoxylin-eosin method, and samples were examined under a light microscope. If IRI was noted, the following grading system was used.

Table 1 - Comparison of biochemical markers between the cilostazol and sham groups.

Table 1 - Comparison of biochemical markers between the cilostazol and sham groups.

Cilostazol’s utility has been proved for intermittent claudication in peripheral vascular pathologies in animal and case control human studies. Many studies have also suggested its beneficial effect on stroke[8]. Animal studies allow assessment of the impacts of cilostazol on myocardial cells with IRI; the present study revealed that it can decrease the inflammatory cascade, myocardial cell deterioration, and fibrosis.

The myocytes produce the energy needed for their vital functions under aerobic status, via fatty acid oxidation, glucose oxidation, and glycolysis. Insufficient oxygenation of myocardial cell leads to the exchange of anaerobic glycolysis for energy production, which decreases ATP levels by 65% at 15 minutes and by 90% at 40 minutes following ischemia[9]. However, blood supply and adequate oxygenation are critical for myocytes, as revealed by Jennings et al.[10], who described myocardial IRI in canine hearts as a coronary ligation model. The authors proposed that reperfusion of myocardial cells promotes the development of necrosis[10].

Previous reports emphasized the importance of histopathological tissue alteration in determining IRI. Abel et al. proposed the four-level model, from G0 (no abnormal changes) to G3 (severe injury) to be used in the evaluation of IRI in myocardial cells[11]. Chen et al.[12] used this classification to show the efficiency of diltiazem plus SOD on IRI[12]. In another study, Okada et al. investigated the protective effect of atenolol on myocardial cells in regard to the histopathological classification abovementioned[13]. In the present study, we found significantly less histopathological damage in Wistar rats’ myocytes when cilostazol was used (Figures 1 and 2).

The obstruction of blood flow is associated with hypoxia and deterioration of electron transport chain in mitochondria. Anaerobic status of cells influences ATP production and the amount of antioxidative agents, which may result in the deterioration of the ion-exchange channel function, enzyme activity in cytoplasm, and electrolyte imbalance. After reperfusion, blood flow with adequate oxygen level led to increased levels of reactive oxygen radicals, in contrast to lower levels of antioxidative agents[14]. Kristiansen et al.[15] found higher ATP levels in IRI model in Sprague Dawley rats and concluded that reduction in ATP levels has beneficial effect on cell viability[15]. In the present study, we achieved significantly lower ATP levels in Wistar rats treated with cilostazol (P=0.044).

SODs are group of metalloenzymes that convert superoxide radicals to molecular oxygen and hydrogen peroxide. SODs are located in cytoplasm, nucleus, mitochondria, and the extracellular part of cell membrane; previous reports demonstrated the benefits of SODs in cancer prevention, regulation of inflammatory events, aging, neurodegenerative disease, and IRI models[16]. Ghio et al.[17] investigated the possible effect of SODs on lung injury after air pollution in mice. The authors found that overexpression of extracellular SODs was associated with reduction in lung injury after exposure to oil fly ash[17]. In another study, Massini et al.[18] showed that M40403 molecule (synthetic SOD molecule) had a protective effect on myocardial cells in IRI models[18] In the present study, we found significantly higher SODs level in the cilostazol group.

Table 2 - Comparison of biochemical markers between the cilostazol and control groups.

Table 3 - Comparison of pathology results between the groups.
Fig. 1 - In the cilostazol group, natural myocardial tissue is observed (hematoxylin-eosin × 400). 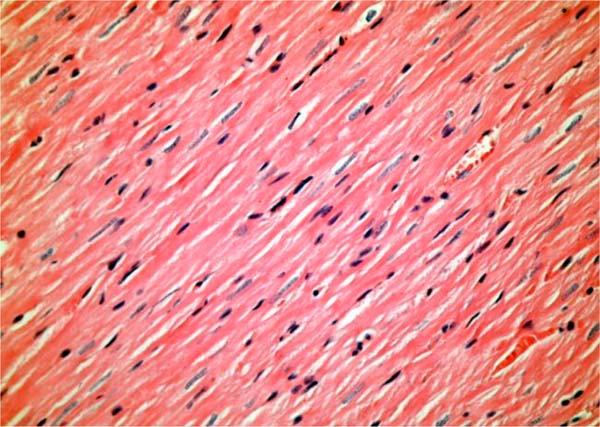 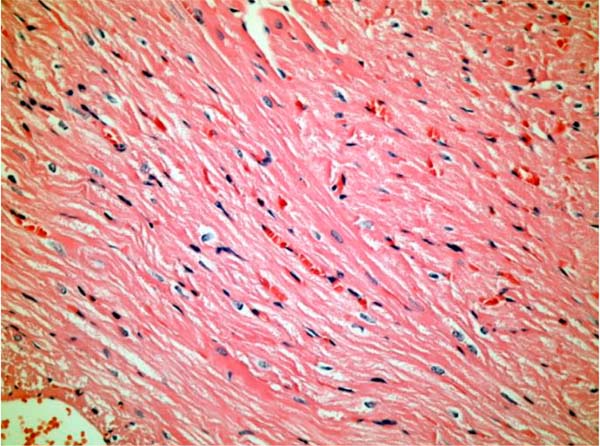 The study has some limitations. Firstly, the present research is an animal experimental study, and as in all animal studies, it is unclear whether outcomes can be generalized to human clinical studies. Secondly, we evaluated six markers and myocardial histopathology, which are approved to use in IRI models in animal research; however, it should be noted that many other molecules, enzymes, and histological evaluation scales are available.

In conclusion, cilostazol has beneficial effect on Wistar rats’ myocardial cells in regard to decreasing inflammatory process, necrosis, and fibrosis after 30-minute ischemia period and 120-minute reperfusion period. Moreover, our findings revealed that the use of cilostazol significantly decreased ATP and increased SOD levels in Wistar rats’ myocardial cells after IRI. Further research involving a greater number of subjects should be conducted to confirm these results.

MS = Substantial contributions to the design ofthe work; and analysis of data for the work; drafting the work;agreement to be accountable for all aspects of the work in ensuringthat questions related to the accuracy or integrity of any part ofthe work are appropriately investigated and resolved; final approvalof the version to be published

CB = Substantial contributions to the analysisand interpretation of data for the work; agreement to be accountablefor all aspects of the work in ensuring that questions related tothe accuracy or integrity of any part of the work are appropriatelyinvestigated and resolved; final approval of the version to bepublished

ES = Substantial contributions to the design ofthe work; and interpretation of data for the work; agreement to beaccountable for all aspects of the work in ensuring that questionsrelated to the accuracy or integrity of any part of the work areappropriately investigated and resolved; final approval of theversion to be published