Objective: To compare del Nido cardioplegia (DNC) with blood cardioplegia (BC) in coronary artery bypass grafting (CABG) combined with mitral valve replacement.
Methods: A 3-year single-center retrospective cohort study was carried out. Subjects who underwent CABG (up to triple bypass) combined with mitral valve replacement were divided into DNC and BC groups. Each group had thirty subjects.
Results: Both groups demonstrated similar baseline characteristics, including age, gender, cardiac/non-cardiac comorbidity, and preoperative echocardiographic parameters. Compared with the BC group, the DNC group demonstrated significantly lower cardioplegia volume (BC = 1130.00±194.1 mL, DNC = 884.33±156.8 mL, P=0.001), cardiopulmonary bypass time (DNC = 110.90±12.52 min, BC = 121.70±13.57 min, P=0.002), aortic clamp time (DNC = 91.37±11.58 min, BC = 101.37±13.87 min, P=0.004), and need for intraoperative defibrillation (DNC = 6 events, BC = 21 events, P=0.001). Postoperative creatine kinase-MB levels and troponin levels were significantly lower in the DNC group than in the BC group. Postoperative haemoglobin and haematocrit levels were significantly higher in the DNC group than in the BC group. The intubation period (hours) in intensive care unit (ICU) was significantly small in the BC group (DNC = 8.13±12.21, BC = 6.82±1.57, P=0.037); however, ICU stay, total hospital stay, and postoperative complication rates were not significantly different between them. At pre-discharge echocardiography, the DNC group demonstrated significantly higher ejection fraction rates than the BC group (47.79±5.50 and 45.72±5.86, respectively, P=0.005).
Conclusion: DNC presented better intraoperative and postoperative parameters and it is an effective and safe alternative to BC for CABG combined with mitral valve replacement.

Open cardiac procedures mostly require cardiopulmonary bypass (CPB) to maintain the blood supply during surgery[1]. Cardioplegia is a state of cardiac arrest and cardiac protection induced by the infusion of cardioplegia solution into the myocardium and involves the cessation of myocardial contractions. During cardioplegia, ischaemia occurs in myocardial tissue[2]. After cross-clamp removal and reperfusion is initiated, a degree of ischaemia/reperfusion injury occurs, which is responsible for most of the complications of cardiac surgery[3].

Several cardioplegia solutions exist with different compositions. However, there is no standard for the optimal composition and delivery technique[4]. Blood cardioplegia (BC), which is the mixture of the subject's oxygenated blood (80%) and a crystalloid solution (20%), is the most widely used cardioplegia type[1]. The del Nido solution was formulated by researchers from the University of Pittsburgh (Pittsburgh, PA, USA) in the early 1990s[5]. As a calcium-free, hyperkalemic, modified depolarizing solution, it was specifically formulated for paediatric cardiac surgery[6]. The del Nido solution contains a base solution of Plasma-Lyte and a crystalloid component. The use of solutions has started to increase in recent years for adults. A recent meta-analysis demonstrated significant advantages of the del Nido solution over BC in adults for several parameters[1]. However, the data regarding the use of del Nido solution in combined coronary artery bypass grafting (CABG) and mitral valve replacement are limited. The aim of the present study is to compare the del Nido cardioplegia (DNC) with BC in CABG combined with mitral valve replacement surgery.

A 3-year retrospective cohort study was performed in a single tertiary academic center, Bakirkoy Dr. Sadi Konuk Education and Research Hospital, between December 2014 and December 2017. The study protocol was approved by the same hospital's ethics board.

Subjects in all age groups who underwent combined CABG (up to triple bypass) and mitral stenosis surgery were included in the study. Exclusion criteria were as follows:

All subjects underwent a full sternotomy for surgical access under transoesophageal echocardiogram guidance. Cardioplegia solution was delivered by antegrade cardioplegia cannula. The velocity was 200 mL/min and the solution's temperature was between 8-14 C degrees. The BC (1000 mL) solution was administered antegradely every 15 to 20 minutes. A single dose (1000 mL) of the del Nido solution was administered antegradely. After the surgeon completed the distal coronary anastomoses, a left atriotomy was performed to expose and excise the mitral valve. The annulus of the mitral valve was sized, and the prosthesis was sutured to the annulus with 25 coated, braided polyester stitches. The correct positioning was confirmed and the left atrium was closed in the standard fashion. The de novo mitral valve competency was assessed using transoesophageal echocardiography. Once the competency of the valve was confirmed, the cross-clamp was removed. A proximal coronary anastomosis was performed with a side clamp. After the surgery, the subjects were transferred to the intensive care unit and they were extubated 6-8 hours postoperatively. None of the subjects with preoperative atrial fibrillation underwent a maze procedure.

The intraoperative parameters were recorded, including aortic clamp time, CPB time, cardioplegia volume, bypass graft number, use of intraoperative defibrillation, and use of inotropic support (adrenalin/other).

Complications such as myocardial infarction, acute renal insufficiency, atrial fibrillation, other arrhythmias, respiratory insufficiency, transient ischemic attack (TIA)/stroke, the need for a pacemaker, reoperation due to haemorrhage, infection, and death were noted.

The length of total intensive care and hospital stays was noted. All subjects underwent an echocardiographic assessment for EF and valve function before discharge from the hospital. 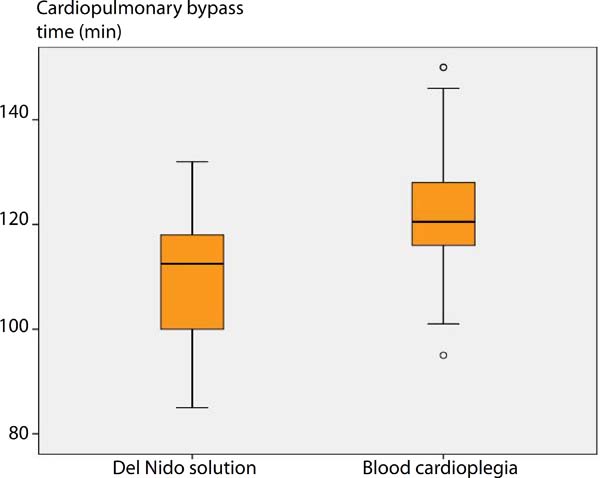 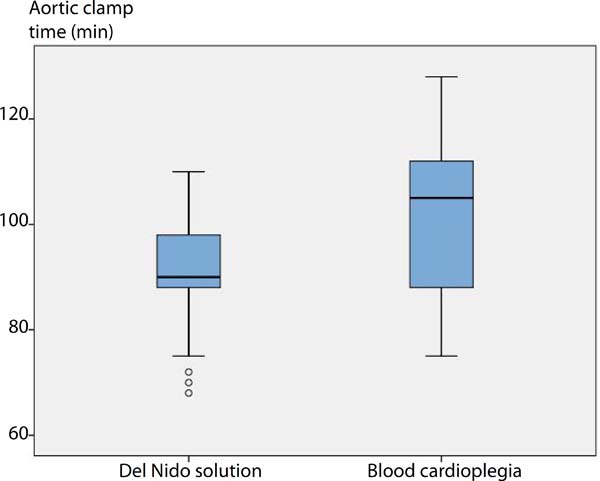 During heart surgery, myocardial protection is an important consideration. Several cardioplegia solutions are available; however, there is no consensus concerning the optimal composition or technique[4]. The current study compared the safety and efficacy of DNC and BC in 30 matched subjects. Compared with the BC group, the DNC group demonstrated better intraoperative parameters, including lower cardioplegia volume, CPB time, aortic clamp time, and need for intraoperative defibrillation.

Available literature did not demonstrate homogeneous data regarding DNC. However, initial experiences demonstrated its safety in CABG and isolated or combined valve surgery[1]. The use of DNC in CABG has been addressed in a few studies. Guajardo Salinas et al.[9] compared DNC (n=134) with BC (n=230). Except for the mean cardioplegia volume, mean number of cardioplegia doses, and defibrillation after cross-clamp removal, the groups demonstrated similar intraoperative and postoperative properties. The use of DNC resulted in a lower need for defibrillation in the subjects who underwent CABG. An equivalent efficiency of DNC was previously demonstrated by Timek et al.[10], who reported the results for 100 propensity-score-matched subjects who underwent CABG. The use of DNC resulted in lower glucose levels than those for BC. In a previous report, Yerebakan et al.[11] demonstrated the safety of DNC in high-risk CABG surgery after acute myocardial infarction. Of 48 subjects who received DNC, the authors reported significantly shorter mean CPB and cross-clamp times; however, other intraoperative and postoperative data were similar between the groups.

Aortic valve procedures were also addressed in studies. Sorabella et al.[14] compared the use of DNC (n=52) with BC (n=65) in isolated aortic valve procedures. Except for total cardioplegia volume, no significant difference was found between the groups. Of 54 matched subjects, Ota et al.[15] reported shorter CPB and cross-clamp times when DNC was used. Postoperative complications as well as length of intensive care and hospital stays did not differ between the groups. Vistarini et al.[16] reported less atrial fibrillation, lower CK-MB levels, and lower insulin requirement associated with the use of DNC in minimally invasive aortic valve surgery. Hamad et al.[2] evaluated the effect of DNC in CABG combined with aortic valve surgery in 25 subjects. CPB time, cross-clamp time, and postoperative CK-MB and troponin levels were lower in the surgeries with use of DNC.

The basic advantages of DNC are single-dose application and glucose-free ingredients[6]. DNC was administered as a single dose for subjects who underwent procedures of less than 90 minutes duration. The single-dose application decreased CPB and cross-clamp times. A recent meta-analysis involving 9 studies reported the effect of DNC in 1501 subjects (4 studies involved isolated valve procedures, 3 studies involved CABG procedures, and 2 studies reported valve procedures or CABG). The results of the meta-analysis reported shorter CPB and cross-clamp times when DNC was used[1]. Cardioplegia volume, blood glucose levels, ventilation time, and length of intensive care stay were also decreased for DNC when compared with those for BC. BC requires multiple interruptions, which is an additional factor for ischaemic damage. The single-dose application was associated with a lower cardioplegia volume and less haemodilution, which decreases the transfusion requirement according to literature[1,2]. In the present study, the need for RBCs and platelet transfusion rates were similar in DNC and BC groups. Although the postoperative plasma transfusion need was lower in the BC group, the importance of this finding could not be clearly described. Having glucose-free ingredients in the solution is important for subjects who have diabetes mellitus. However, no significant difference was observed between the groups in the present study.

The use of DNC demonstrated lower CK-MB and troponin levels, which are sensitive biomarkers for cardiac injury. The lower levels in our study were a sign of better myocardial protection. The DNC group also demonstrated higher Hgb and Htc levels; however, RBC transfusion rates were similar for both groups. In the present study, the use of DNC demonstrated similar postoperative complication rates and intensive care and hospital stay rates. Although the BC group demonstrated significantly shorter intensive care unit intubation period than the DNC group, this difference was not regarded as clinically significant. Before discharge, the subjects underwent an echocardiographic assessment. A higher EF rate in the DNC group was also a sign of better myocardial protection.

This study presents a single-center, single-surgeon experience in a retrospective design, and there are limitations related to such design. Long-term follow-up was not conducted, which made it difficult to interpret some findings such as lower cardiac marker levels and better postoperative EF rates. As an initial experience, our data added observational value, but there is a need for randomised, multicenter trials comparing different solutions in different cardiac procedures.

The current study results showed better intraoperative and postoperative chemical parameters when DNC was used. The need for a lower cardioplegia volume and an uninterrupted procedure are the main advantages of DNC. DNC is at least equivalent to BC and it is a safe alternative to BC in CABG combined with mitral valve surgery in adults.

AAK Substantial contributions to the conception or design of the work; or the acquisition, analysis, or interpretation of data for the work; drafting the work or revising it critically for important intellectual content; final approval of the version to be published

ST Substantial contributions to the conception or design of the work; or the acquisition, analysis, or interpretation of data for the work; drafting the work or revising it critically for important intellectual content; final approval of the version to be published; agreement to be accountable for all aspects of the work in ensuring that questions related to the accuracy or integrity of any part of the work are appropriately investigated and resolved