Introduction: The aim of this study was to determine the outcomes of patients developing ischemic stroke after coronary artery bypass grafting (CABG).
Methods: From March 2012 to January 2017, 5380 consecutive patients undergoing elective coronary surgery were analyzed. Ninety-five patients who developed ischemic strokes after on-pump coronary surgery were included in the study, retrospectively. The cohort was divided into four subgroups [total anterior circulation infarction (TACI), partial anterior circulation infarction (PACI), posterior circulation infarction (POCI), and lacunar infarction (LACI)] according to the Oxfordshire Community Stroke Project (OCSP) classification. The primary endpoints were in-hospital mortality, total mortality, and survival analysis over an average of 30 months of follow-up. The secondary endpoints were the extent of disability and dependency according to modified Rankin Scale (mRS).
Results: The incidence of stroke was 1.76% (n=95). The median age was 62.03±10.06 years and 68 (71.6%) patients were male. The groups were as follows: TACI (n=17, 17.9%), PACI (n=47, 49.5%), POCI (n=20, 21.1%), and LACI (n=11, 11.6%). Twenty-eight (29.5%) patients died in hospital and 34 (35.8%) deaths occurred. The overall mortality rate of the TACI group was significantly higher than that of the LACI group (64.7% vs. 27.3%, P=0.041). The mean mRS score of the TACI group was significantly higher than that of the other groups (P=0.003).
Conclusion: Patients in the TACI group had higher in-hospital and cumulative mortality rates and higher mRS scores. We believe that use of the OCSP classification and the mRS may render it possible to predict the outcomes of stroke after coronary surgery.

Stroke is a devastating complication of coronary bypass surgery, significantly increasing mortality, morbidity, cost, and the need for long-term care, and reducing the quality of life. The incidence of stroke after cardiac surgery has ranged from 0.4-14% in different series[1,2] and varied by the type of surgery, with concomitant and valvular procedures being associated with the greatest risks[3]. However, the incidence of stroke after coronary surgery has been reported to be as low as 1-5% in some previous studies[4,5].

Three different mechanisms may be in play when postoperative stroke develops after cardiac surgical intervention: a brain perfusion disorder, an embolic event, and/or an inflammatory response[6]. Early stroke may be caused by an embolism triggered by manipulation of the heart and aorta, or by particles transported via cardiopulmonary bypass (CPB); later events may be associated with low cardiac output, myocardial infarction, atrial fibrillation, and/or hypercoagulability[7]. Patients at an increased risk for stroke after cardiac surgery include those with carotid stenosis, peripheral vascular disease, hypertension, diabetes mellitus, renal failure, and/or a recent myocardial infarction[8].

Although previous studies focused on risk factors for stroke after coronary surgery[10,11], only limited data are available on long-term postoperative survival and it is difficult to predict the clinical outcomes of patients who suffer strokes after coronary artery bypass grafting (CABG). We hypothesized that the subtypes of ischemic stroke developing after coronary surgery might affect both mortality and morbidity. Using a simple classification of stroke that is based on clinical findings may aid surgeons to predict the risks of mortality and morbidity, and other patient outcomes.

The aim of this study was to explore the outcomes of ischemic stroke after coronary surgery by OCSP subtype; we measured in-hospital and long-term survival, and stroke disability and dependence scores employing the modified Rankin Scale (mRS), which is widely used worldwide to assess stroke outcomes[12].

From March 2012 to January 2017, in a single center, 5380 consecutive patients undergoing coronary surgery were retrospectively analyzed. Ninety-five patients who developed ischemic stroke after elective and on-pump CABG surgery were included in the study. The cohort was divided into four subgroups (TACI, PACI, POCI, and LACI) by the subtype of ischemic stroke using the OCSP classification. Exclusion criteria were: 1- patients who had carotid stenosis more than 50 percent, 2- presence of prior stroke, 3- off-pump surgery, 4- re-operation surgery, 5- additional procedure to CABG.

The primary endpoints of the study were in-hospital mortality, overall mortality, and later survival in terms of OCSP classification; the average follow-up time was 30 months. The secondary endpoints were the extent of disability and dependency, scored using the mRS.

Mortality: Any reason of dead after coronary bypass surgery in cohort.

Statistical analyses were performed using the statistical software NCSS (Number Cruncher Statistical System) version 2007 (Kaysville, Utah, USA). Descriptive data for continuous variables were presented as mean and standard deviation, numbers (%) or median and interquartile range. Differences between the groups were investigated using Student's t-test or the Mann-Whitney test, and Pearson x2 test. The survival rates were estimated according to the Kaplan-Meier method. Value of P<0.05 was considered statistically significant.

During the study period, 5380 consecutive patients who underwent elective CABG surgery were analyzed, of whom 95 developed postoperative strokes; all were retrospectively included.

Table 2 - Patients characteristics and preoperative data according to OCSP groups.

Table 2 - Patients characteristics and preoperative data according to OCSP groups. 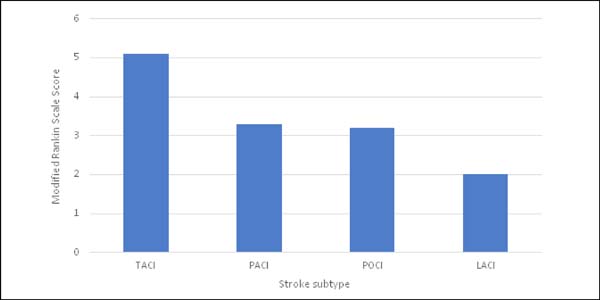 Table 3 - Stroke timing and major outcomes of the groups. 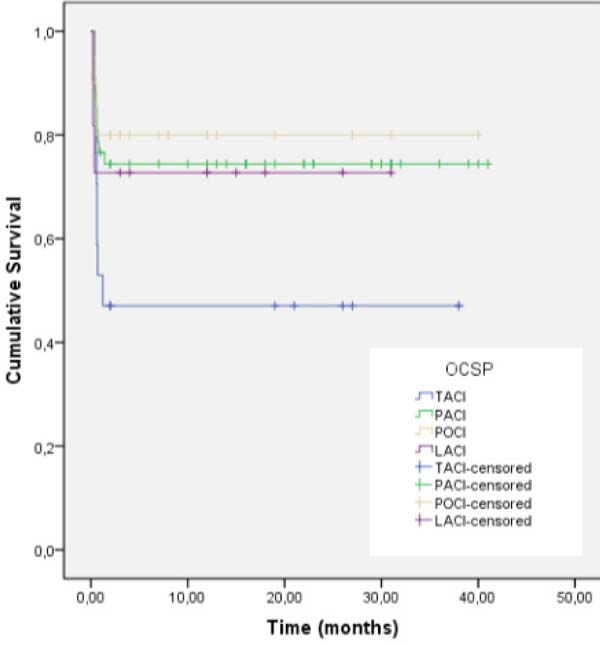 Our single-center retrospective study evaluated the stroke outcomes of a large cohort of patients undergoing elective on-pump CABG, by stroke subtype. Previous studies focused on risk factors associated with the timing of postoperative stroke after coronary surgery, but did not evaluate in-hospital or total mortality, the extent of follow-up, or the disability level by stroke subtype[13,14]. We evaluated 95 of 5380 consecutive CABG patients who experienced ischemic stroke by stroke-OCSP subtype.

Our study sample was relatively homogeneous. The mean age, gender distribution, and concomitant disease level were similar among patients differing in terms of OCSP stroke subtype. None of the pre-operative LVEF, hematocrit, or creatinine level differed among the stroke subtypes. Such homogeneity suggests that among-group morbidity and mortality comparisons may be valid.

We found that patients who developed different subtypes of ischemic stroke after CABG surgery experienced different outcomes. In overall and in-hospital mortality, and the extent of disability (measured using the mRS), were higher in the TACI subgroup than the other subgroups. In all subgroups, early stroke was more common and more serious then delayed stroke, and was particularly common in the TACI, PACI, and POCI subgroups. Delayed stroke was more frequent in the LACI subgroup; mortality was lower and the mRS score and survival were better in this subgroup. On follow-up, LACI-type stroke was associated with better 5-year and cumulative survival rates and a lower mRS score.

The overall prevalence of stroke was 1.76%, thus lower than the 2.7% reported by Hedberg et al.[15]. However, the in-hospital and total mortality of patients who developed ischemic stroke after CABG (n=95) were 29.5% and 35.8%, respectively. Santos et al.[16] analyzed predictors of stroke in 4,626 patients after coronary surgery and noted that the incidence of stroke was 3% in those undergoing coronary surgery alone. However, mortality was 31.9% in the stroke group[16]. Our figures are similar to those in the literature (stroke incidence 1.76%; overall mortality 35.8%); such a high mortality rate is an enormous complication for surgeons and, of course, calamitous for patients. Also, the extent of dependence and disability after stroke is very challenging. Therefore, a clinical classification of postoperative stroke with prediction of outcomes is crucial.

Patients developing early stroke had higher and earlier mortality than those with delayed strokes. In our study, the mean ischemic stroke time was 2.94 days postoperatively. The number of patients who developed early strokes was greater than the number who developed delayed strokes (58.9% vs. 41.1%). Also, our results showed that those who developed strokes within 48h had a higher mortality rate and mRS score. Hedberg et al.[15] analyzed stroke developing after coronary surgery (early and delayed stroke) and concluded that stroke seriously increased the risk of short-term mortality, in line with our findings. However, they did not classify stroke by subtype. In our series, the TACI, PACI, and POCI subgroups had more early strokes (within 48 h): 76.5, 51.1, and 75%, respectively; the LACI subgroup had more delayed strokes (63.6%). Also, mortality was significantly lower in the LACI than the TACI subgroup (27.3% vs. 64.7%, P=0.041). Furthermore, the in-hospital mortality rate was higher in the TACI than the PACI, POCI, and LACI subgroups; 52.9% vs. 25.5%, 20%, and 27.3%, respectively. Thus, when a stroke develops within 48h after coronary surgery, it is likely to be of the TACI form, associated with very high mortality and morbidity.

Our mean follow-up time was 30.1±1.6 months. The survival rates were similar in the LACI (72.7%), PACI (70.2%), and POCI (70%) subgroups, but lower in the TACI (35.3%) subgroup. There was no significant difference in the follow-up periods of patients with various stroke subtypes. We used the log-rank test to explore among-subgroup differences in 5-year survival, and found no such difference.

Stroke is a complicated, multifaceted clinical issue. We analyzed survival and disability, but we lacked information on quality of life because of retrospective study design. Also, mRS scores were calculated just prior to discharge; we have no long-term data regarding disability degree in the follow-up. However, our study is the largest clinical analysis by OCSP classification of stroke after CABG. Although in-hospital mortality was directly attributable to stroke-related events, total mortality was all-cause. We do not know whether later mortality was caused by stroke alone. Finally, we had no data on lesional size or volume, which may have influenced clinical outcomes.

In conclusion, TACI subgroup patients had higher in-hospital and cumulative mortality rates and a higher mRS score. Strokes developing within 48h of coronary surgery were severe, especially in the TACI and POCI subgroups. The extent of dependency and disability were significantly higher in the TACI subgroup. We suggest that use of the OCSP classification and the mRS may render it possible to predict the outcomes of stroke after coronary bypass surgery.

MA Substantial contributions to the conception or design of the work; or the acquisition, analysis, or interpretation of data for the work; drafting the work or revising it critically for important intellectual content; final approval of the version to be published

CK Substantial contributions to the conception or design of the work; or the acquisition, analysis, or interpretation of data for the work; final approval of the version to be published

MSB Agreement to be accountable for all aspects of the work in ensuring that questions related to the accuracy or integrity of any part of the work are appropriately investigated and resolved; final approval of the version to be published

ZY Substantial contributions to the conception or design of the work; or the acquisition, analysis, or interpretation of data for the work; final approval of the version to be published

AK Agreement to be accountable for all aspects of the work in ensuring that questions related to the accuracy or integrity of any part of the work are appropriately investigated and resolved; final approval of the version to be published

AO Agreement to be accountable for all aspects of the work in ensuring that questions related to the accuracy or integrity of any part of the work are appropriately investigated and resolved; final approval of the version to be published

MY Final approval of the version to be published

TK Final approval of the version to be published

BK Drafting the work or revising it critically for important intellectual content; final approval of the version to be published

EA Drafting the work or revising it critically for important intellectual content; final approval of the version to be published