In addition to being associated with postoperative complications, longer hospitalizations, risk of infection and greater costs to the health system, AKI is an independent predictor of intra-hospital mortality; since it increases mortality by up to eight times, consequently decreasing the survival of patients[3,4].

This retrospective study was conducted in a large public Brazilian hospital specialized in cardiology. Consecutive patients referred to cardiovascular surgery in a 4-year period were analyzed. Patients older than 18 years old, who underwent cardiovascular surgery and presented AKI requiring dialysis up to 30 days in the postoperative period, were eligible. Those who underwent congenital surgeries and cardiac transplantation were excluded.

IBM-SPSS (Statistical Package for the Social Sciences) version 19.0 (SPSS Institute, Chicago, Illinois, USA) was used for the statistical analysis. Fisher's exact test was used to compare the categorical variables. The survival of patients was estimated and graphically represented using the Kaplan-Meier curves. The log-rank test was used to compare survival curves. Pairwise comparison was performed when there were more than two groups with Bonferroni correction. Variables that were statistically significant (P<0.1) were submitted to multiple analyses according to the Cox's proportional hazards model. Subsequently, the StepWise Backward method was performed to obtain the final model. The variables that presented P<0.05 on the latter were considered significant.

This study was approved by the Institutional Review Board at the hospital where the data were collected (protocol No. 4205/12).

A total of 5,189 cardiovascular surgeries were conducted on adult patients on the period of the study and 157 patients were identified in accordance with the eligibility criteria. The patients' characteristics are presented in Table 1.

In regard to the classification of kidney disease in the preoperative, 33% presented GFR III (moderate), 29% GFR II (mild) and 22% GFR V (renal failure). In regard to the type of surgery, valve surgeries (49.7%) predominated, followed by myocardial revascularization (35.7%). The average duration of extracorporeal circulation was 121.45 minutes.

Table 2 - Association between the pre, intra and postoperative and survival at different points in time with survival and CI 95% (lower lim - upper lim). São Paulo, Brazil 2014.

Table 2 - Association between the pre, intra and postoperative and survival at different points in time with survival and CI 95% (lower lim - upper lim). São Paulo, Brazil 2014.

GFR presented P-value=0.017, while patients with GFR V (kidney failure) presented better survival results (81.8%) within 30 days and over time, when compared to the survival of the remaining patients at different stages of kidney disease (GFR I, GFR II, GFR III, GFR IV).

CPB duration was not statistically significant for survival, while the presence of complications was significant (P-value=0.0003) in the association between survival and postoperative variables.

Cox regression was performed based on the multivariate analysis and the effect of the covariates age, GFR, CPB time, postoperative complications, length of stay in ICU and survival time was estimated. Data are presented in Table 3.

Figure 1 represents the patients' overall survival curve. The average time of survival in this study population was 1.5 years, approximately 546 days. 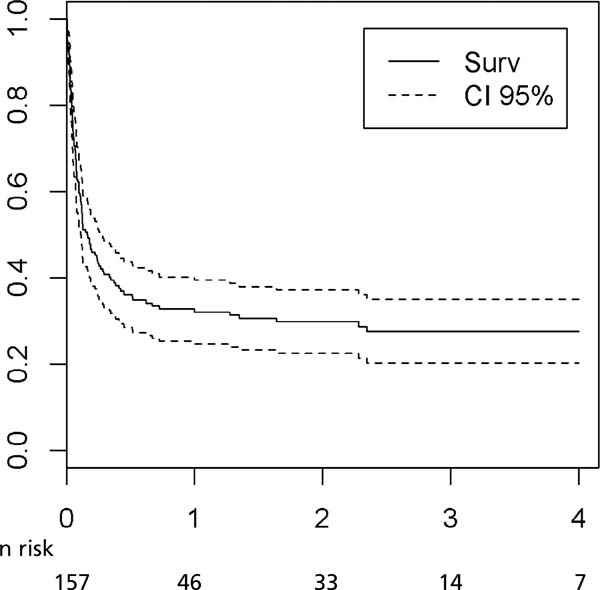 Fig. 2 - Relationship between the survival and age of patients. 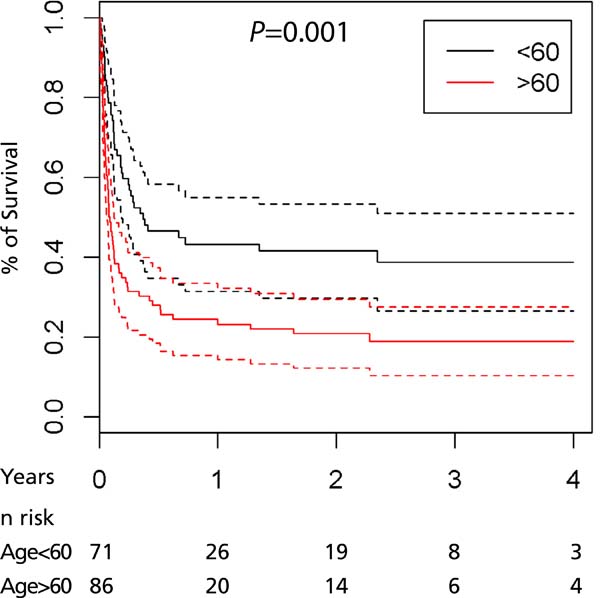 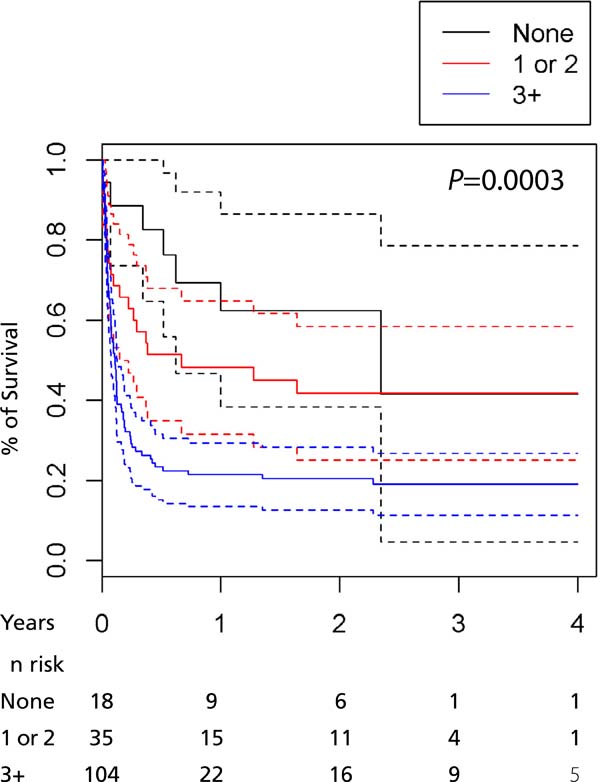 Fig. 3 - Relationship between the survival of patients and number of complications.

Advanced age, as observed in this study, has been related to dialytic kidney failure since the kidneys are prone to aging process[12]. One analysis with 145,911 patients[13] aged 65 years old or older who had their aortic valve replaced or repaired concomitantly with a myocardial revascularization, between 1991 and 2007, reports an average survival of 13 years for patients aged between 65 and 69 years old, 9 years for those between 70 and 79 and 6 years for patients aged 80 years old or older. Although the type of surgery appears as an important factor associated with decreased survival, it was not significant in this study.

Interestingly, we did not notice in this series relation between BMI and EuroSCORE II to decreased survival since they are well established to dialytic AKI in cardiovascular patients[14-17]. Other factors predicting AKI were identified in patients who had undergone cardiovascular surgery and developed AKI that required dialysis, such as having a preoperative severe status and preexisting kidney disease[18].

Patients undergoing dialysis in whom myocardial revascularization was performed present higher mortality, approximately 7% to 10%, which is three times greater than non-uremic patients[20]. Long-term results show that the survival of patients undergoing dialysis after coronary artery bypass graft (CABG) is decreased, with mortality in 5 years estimated to be 48%[6,11,21].

Complications emerging in the preoperative phase of cardiovascular surgeries among patients with AKI requiring dialysis significantly increase mortality rates[17,19]. Among potential complications, pulmonary atelectasis is reported as the main complication found in 54% to 92% of patients in the postoperative period of cardiovascular surgery[24]. The presence of complications identified in individuals who developed postoperative AKI that requires dialysis after a cardiovascular surgery shows that these patients may require mechanical ventilation for longer periods. On the other hand, mechanical ventilation increases the risk of pulmonary infection, while AKI creates an altered inflammatory environment that may cause atrial arrhythmias[6].

One recent study revealed that AKI stage 1 and stages 2 or 3, according to AKIN criteria, were associated with significant increase, from 31% to 98% of readmission in five years, in addition to significant higher mortality risk, from 1.5 to 3.5 times, five years after surgery[25]. Similar results were found in association with increased intra-hospital mortality among patients who initiated dialysis later on (>3 days) after cardiovascular surgery, in comparison to those who started dialysis within three days after surgery[9].

In this study, 140 out of the 157 patients presented some degree of preoperative kidney disease and only 17 presented normal kidney function. All the patients, however, required postoperative dialysis. Univariate analysis revealed significant differences between the groups GFR IV (severe) and GFR V (renal failure) in the pairwise analysis, with P=0.0109, though the GFR was not significant in the survival of these patients, according to the Cox regression model. It is possible that the fact that preoperative dialysis patients were introduced earlier to dialysis than those who developed postoperative AKI and later required it explains the greater survival rate among the first group of patients. Patients in a previous dialysis program were not related to have long term mortality than new demanding dialysis patients after cardiovascular surgery.

Data show an average survival of 546 days among dialytic AKI patients after cardiovascular surgery, while factors such as age, and postoperative complications were determinant regarding decreases in the survival of these patients.

The multidisciplinary staff in the intensive care unit must be aware of the profile of these patients and understands how their clinical condition develops to refer them to early dialysis in order to properly handle AKI and decrease irreversible damage. The planning of interventions in the perioperative period is essential to decreasing the emergence of AKI and avoiding complications, significantly contributing to decreased mortality and improved survival of patients.

ABVS Substantial contributions to the conception, acquisition, analysis and interpretation of data for the work; final approval of the version to be published

AMRZC Contributions on interpretation of data, drafting the work or revision it critically for important intellectual content; final approval of the version to be published