Neutrophil to lymphocyte ratio (NLR) and platelet to lymphocyte ratio (PLR) are recently described clinical parameters which can be found by detailed analysis of hemogram. There are many disorders with severe prognosis including peripheral vascular diseases, coronary artery disease, some of the malignancies of hepatobiliary and gynecological systems which are associated with elevated PLR levels. Elevated NLR levels have been demonstrated in systemic inflammation, cardiovascular disorders and gastrointestinal cancers[6-8].

There have been no reports that focused on the association between the biomarkers NLR and PLR and AKI following coronary artery bypass grafting (CABG) in the recent literature. The aim of this study is to indicate the relationship between values of NLR and PLR and the development of AKI in patients in the early postoperative period of isolated CABG.

The medical records of a total of 506 patients who underwent isolated CABG between May 2010 and October 2014 were reviewed retrospectively. The operations were performed at the same center by the same surgery team; 311 patients who had serum creatinine levels of < 1.5 mg/dl who underwent isolated CABG with CPB were included in the study. The diagnosis of AKI was made by comparison of the baseline and postoperative serum creatinine levels to determine the presence of a predefined significant change based on the Kidney Disease Improving Global Outcomes (KDIGO) definition (increase in serum creatinine by ≥ 0.3 mg/dl within 48 hours of surgery or increase in serum creatinine to ≥ 1.5 times of baseline within 3 days of cardiac surgery)[9].

The diagnosis of AKI was based on the highest serum creatinine concentration measured during the first 3 days after surgery compared with the baseline serum creatinine concentration, defined as the last concentration measured before surgery. Urine output was not used to define AKI, because it might be altered by diuretics administered during anaesthesia and CPB. Patients who developed AKI in the early postoperative period were classified as Group-1 (n=62) and the patients with normal postoperative renal functions were classified as Group-2 (n=249).

AKI was also staged for severity according to the following KDIGO criteria:

All patients were transferred to intensive care unit intubated postoperatively. They were extubated following onset of spontaneous breathing and normalization of orientation and cooperation if the hemodynamic and respiratory functions were appropriate. If there was no contraindication, 50 mg/day of metoprolol was started orally to all patients following the first postoperative day. The diagnosis of postoperative atrial fibrillation was made by standard 12 derivation electrocardiography (ECG).

Written informed consent form was obtained from all the patients included in the study. This study complied with the Declaration of Helsinki and was carried out following approval of Ethics Committee for Clinical Trials of Medical Faculty of Kocaeli University.

All patients were operated with median sternotomy under general anaesthesia and CPB with aortic and venous cannulations following systemic heparin administration (300 IU/kg). Activated clotting time (ACT) was maintained over 450 seconds during the operations. Standard CPB circuit and surgical management were used. Antegrade hypothermic and hyperkalemic blood cardioplegia was applied to all patients. Surgery was performed under moderate systemic hypothermia (28-30ºC). Cardiopulmonary bypass flow was maintained 2.2-2.5 l/min/m2, mean perfusion pressure was maintained between 50 and 80 mmHg, hematocrit level was maintained between 20 to 25 percent during CPB. For the coronary bypass operations, the left internal mammary artery (LIMA) was preferred for the arterial graft for left anterior descending artery (LAD) revascularization, whereas saphenous venous grafts were used for the other vessels. Distal anastomoses were done during aortic cross clamping period and proximal anastomoses were done on beating heart onto the ascending aorta using lateral clamp.

Statistical analysis was performed using the SPSS software version 13.0 (SPSS Inc, Chicago, IL, USA). Among the data measured, those showing normal distribution were expressed as mean ± standard deviation, those not showing normal distribution were expressed as median (minimum-maximum). The data obtained by counting were given as percentages (%). Among the data measured, the normality of distribution was evaluated by histogram or Kolmogorov-Smirnov test, the homogenity of distribution was evaluated by Levene's test for equality of variance. Among the data measured, the difference between the groups was evaluated by Student's t-test in normal and homogenous distribution and by Mann-Whitney U test in distribution which is not normal and homogeneous. Among the data obtained by counting, the differences between the groups were evaluated by parametric or non-parametric Pearson Chi-Square test or Fisher's Exact test according to the distribution being parametric or not. The effects of the risk factors suggested to be influential on the early period AKI were studies through the univariate logistic regression analysis. The multiple effects of the risk factors which are influential or which are suggested to be influential in predicting the early period AKI as a result of the univariate statistical analysis were studied through the retrospective selective multivariate logistic regression analysis. The odds ratio, the 95% confidence interval and the significant level for each of the risk factors, was found. The sensitivity and the specificity of PLR and NLR in predicting the early period AKI via receiver operating curve (ROC) were computed and results were found as statistically significant for P<0.05.

Table 1 - Comparison of patient's characteristics between the 2 groups.

Table 1 - Comparison of patient's characteristics between the 2 groups.

Table 4 - Intraoperative and postoperative data of the patients.

Table 4 - Intraoperative and postoperative data of the patients.

The results of univariate and multivariate regression analyses of patients who developed AKI in the early postoperative period were shown in Table 5. In the multivariate analysis of the variables which were found statistically significant in univariate analysis associated with postoperative AKI, increased serum creatinine (P=0.0001), CRP levels (P=0.02), PLR (P=0.002) and NLR (P=0.04) in the preoperative period, increased leukocyte counts (P=0.03), CRP levels (P=0.02), NLR (P=0.002) and PLR (P=0.01) in the first postoperative day and prolonged intubation time (P=0.006) were found as independent predictors of early postoperative AKI. 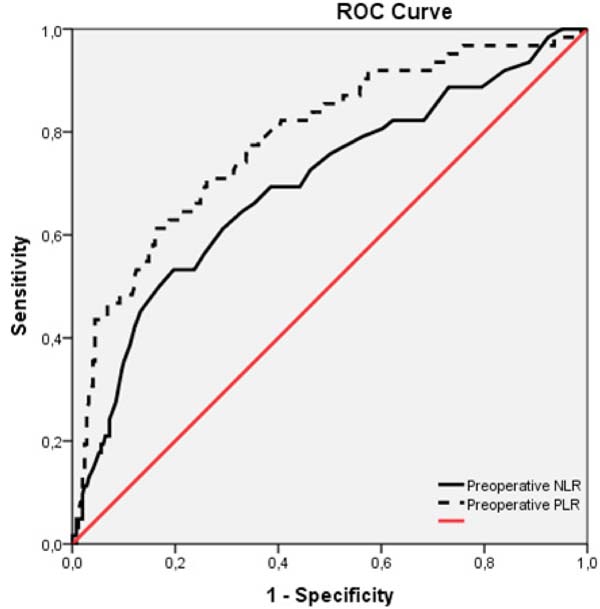 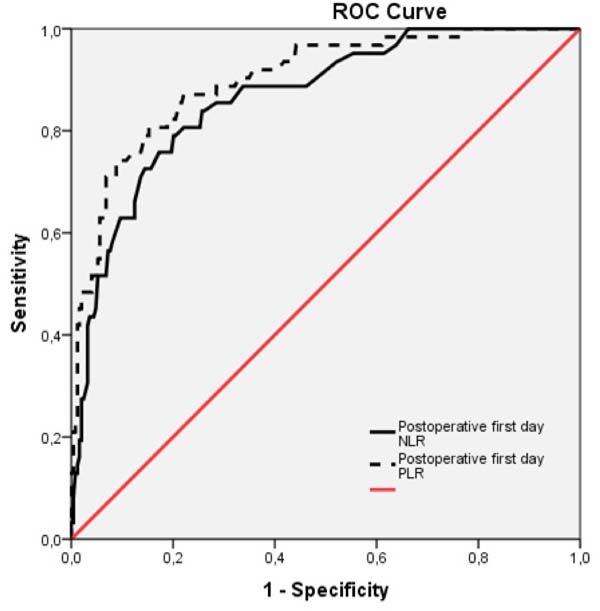 AKI is a common postoperative complication of cardiac surgery, associated with a prolonged hospital stay and increased morbidity and mortality, even for patients who do not progress to renal failure. The incidence of AKI following cardiac surgery is 5-30%[2]. In our study, we have identified the occurrence of AKI after CABG as 19.9%.

The pathophysiology of AKI is complex and multifactorial, and the locus of injury is typically the tubular cells and involves toxins (exogenous and endogenous), inflammation, ischemia-reperfusion injury, neurohormonal activation, metabolic factors and oxidative stress[11]. Another cause of AKI following cardiac surgery could be a pro-inflammatory event such as operative trauma, blood exposed to the artificial surface of the CPB circuit or ischaemia-reperfusion injury[2]. C-reactive protein is a marker of inflammation that is extensively used in clinical practice. Recently, several prospective clinical studies have shown that modest elevations in baseline CRP levels predict future cardiovascular events[12]. Shacham et al.[13] reported >9 mg/l of high sensitive CRP levels as an independent risk factor for AKI following primary percutanous interventions of the patients with ST-elevated myocardial infarction (STEMI). In our study, we found that the preoperative and early postoperative increased CRP levels are independent risk factors for the development of AKI in the early postoperative period.

Several inflammatory biomarkers including white blood cell (WBC) count, leukocyte subtypes, platelet, CRP, NLR and PLR have been demonstrated to be important prognostic predictors in various cardiovascular diseases[14]. Each WBC subtype, including neutrophils, lymphocytes, monocytes, and eosinophils, has a discrete role in inflammation, host defense, and repair[15]. Each of these components are one of the immunologic factors that play a pivotal role in most processes of organ damage and this role can apply to the issue of kidney damage[16]. In our study, we have determined that the blood leukocyte levels were significantly higher in the AKI group in the 1st and 3rd days postoperatively.

NLR is a new inflammatory marker which is associated with inflammation[17]. It has also been shown that NLR was associated with adverse events following CABG in stable and unstable angina pectoris. Ünal et al.[18] have observed that preoperative NLR was correlated with mortality after CABG. Yilmaz et al.[19] reported that NLR is superior to CRP and WBC, to predict the development of AKI in the patients with severe sepsis. In our study, we identified that the preoperative and postoperative NLR values were significantly high in patients with AKI.

To our knowledge, there have been no studies in the literature with patients who underwent isolated CABG with CPB, that investigated the relationship between the development of postoperative AKI and NLR as a biomarker, so we suppose that our findings are valuable. PLR is a recently defined hematological parameter which is associated with both aggregation and inflammation pathways, and it can be more valuable than either platelet or lymphocyte counts alone in predicting coronary artery disease[20]. PLR has been used to predict the prognosis of patients with different inflammatory and ischemic events in the literature[21]. Temiz et al.[22] have observed elevated PLR to be associated with hospital mortality in patients with STEMI. Akin et al.[23] reported in their study including 630 patients who underwent percutanous coronary intervention (PCI) after STEMI that the patients who had higher PLR values before the procedure developed contrast-induced AKI. In our study PLR values of AKI Group were significantly high.

Limitations of the Study

A few limitations of our study deserve mention. This is a single centre retrospective study with a relatively small sample size. Although we have found some parameters associated with AKI, we could not draw a causal relationship.

In our study, we observed that elevated NLR and PLR were independent predictors of early postoperative AKI following isolated CABG. NLR and PLR, which can easily be obtained from a simple whole blood count, may predict adverse events after CABG. Although we could not establish a causal relationship in this study, the results of this study may have some clinical implications if approved by large scale prospective studies.

9. Okusa MD, Davenport A. Reading between the (guide)lines: the KDIGOpractice guideline on acute kidney injury in the individual patient. Kidney Int.2014;85(1):39-48. [MedLine]

HP Substantial contributions to the conception or design of the work; or the acquisition, analysis, or interpretation of data for the work; final approval of the version to be published

HS Substantial contributions to the conception or design of the work; or the acquisition, analysis, or interpretation of data for the work; final approval of the version to be published