Objective: Postoperative atrial fibrillation (PoAF) is a common complication after coronary artery bypass grafting (CABG). The aim of the present study was to evaluate the association between development of PoAF and vitamin D levels in patients undergoing isolated CABG.
Methods: This prospective randomized clinical trial was conducted on the patients with isolated CABG. The study was terminated when 50 patients in both PoAF(+) group and PoAF(-) group were reached. Development of AF until discharge period was assessed. Vitamin D level was measured immediately after AF; it was measured on the discharge day for the patients without PoAF. Predictive values of the independent variables were measured for the development of PoAF.
Results: The groups were separated as PoAF(-) group (66% male, mean age 58.18±10.98 years) and PoAF(+) group (74% male, mean age 61.94±10.88 years). 25(OH) vitamin D level (OR=0.855, 95% CI: 0.780-0.938, P=0.001) and > 65 years (OR=3.525, 95% CI: 1.310-9.483, P=0.013) were identified as an independent predictor of postoperative AF after CABG surgery in multivariate analysis. The cut-off level for 25(OH) vitamin D level in receiver-operating characteristic curve analysis was determined as 7.65 with sensitivity of 60% and specificity of 64% for predicting PoAF (area under the curve: 0.679, P=0.002).
Conclusion: Vitamin D level is considered an independent predictor for development of PoAF. Lower vitamin D levels may be one of the reasons for PoAF.

Postoperative atrial fibrillation (PoAF) is a common complication after coronary artery bypass grafting (CABG), affecting about 20% to 35% of all patients in the early postoperative period[1]. PoAF is commonly associated with hemodynamic instability, thromboembolic events, increase in early and late mortality rates, heart failure progression and increased duration of hospitalization[1].

Deficiency of vitamin D may cause a number of diseases. Some of these diseases include type 2 diabetes mellitus, metabolic syndrome, obesity, hypertension, and some cardiovascular disease[4]. Several pathophysiological mechanisms were suggested for the association between vitamin D deficiency and atrial fibrillation (AF). One of the most important mechanisms is the activation of the renin-angiotensin-aldosterone system (RAAS), as it is responsible for both structural and electrical remodeling of the atrium. Vitamin D negatively affects the RAAS, and it has antioxidant effects that reduce oxygen free radicals in the atria which are associated with inflammation and the production of proarrhythmic materials[5].

This prospective randomized clinical trial was conducted on the patients with isolated CABG diagnosed at of Cardiovascular Surgery Department within Bursa Yuksek Ihtisas Training and Research Hospital, Bursa, Turkey, between November 2016 and May 2017. The study was approved by the local institutional Ethical Committee of the University of Health Sciences. All procedures were performed in accordance with the Declaration of Helsinki.

Inclusion criteria was isolated CABG. The exclusion criterias were having preoperative AF or flutter, previous treatment with amiodarone, presence of valvular heart disease, chronic obstructive pulmonary disease (COPD), prolonged intensive care unit (ICU) stay, patients who underwent more than one cardiac surgery, bleeding revision, chronic renal failure. Patients who underwent isolated CABG were followed until the day of discharge from the hospital. Patients who developed AF during the this period were included in the POAF(+) group, and patients without AF were enrolled in the PoAF(-) group. The study was terminated when 50 patients were reached in both groups.

Table 1 - Demographic features of the patients.

Table 1 - Demographic features of the patients.

The inactive vitamin D precursors are first exposed to 25-hydroxylation in the liver to form 25-hydroxy vitamin D [(25(OH) vitamin D]. This is the actual circulating form of vitamin D and therefore is usually considered as a circulating biomarker for vitamin D status[6].

The patients were monitored in ICU with continuous heart rhythm and invasive blood pressure monitoring. In addition, a 12-lead electrocardiography (ECG) record was also obtained daily in the ICU. Patients were monitored continuously by five-lead telemetry in the regular ward. When the patients complained about palpitation, dyspnea and angina, 12-lead ECG was taken. AF was confirmed by 12-lead ECG. Postoperative AF was described as irregular, fast oscillations or fibrillatory waves instead of regular P waves at ECG. An AF episode longer than 5 minutes was accepted as PoAF. Standard medical cardioversion treatment was conducted with amiodarone (5 mg/kg) for 30 minutes, followed by 900 mg/day.

In the present study, 50 patients were enrolled into each group. The demographic and clinical characteristics of the participants are summarized in Table 1. Being over 65 years of age was evaluated as a different parameter. Patients with PoAF were similar to patients without PoAF in regards to demographic properties, in generally. But, in terms of in patients with age > 65 years was statistically significant difference between two groups (P=0.035) (Table l). 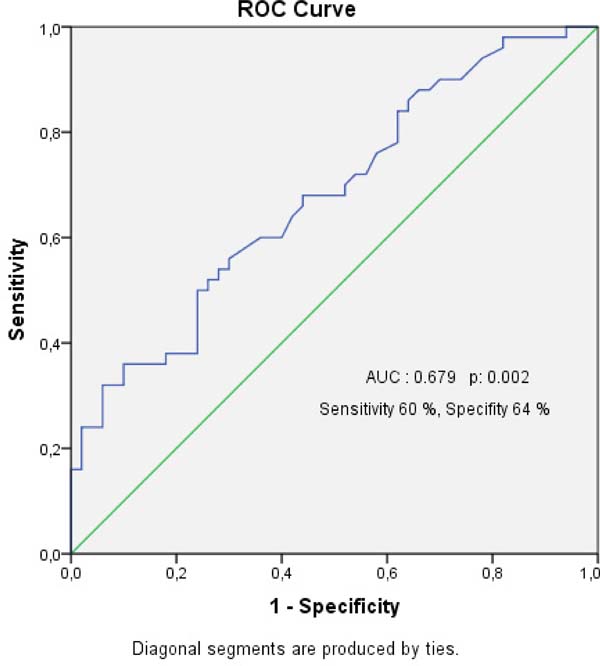 Fig. 1 - Receiver operation characteristic (ROC) curve and the area under the curve (AUC) for vitamin D levels for predicting PoAF.

The incidence of PoAF following CABG surgery is seen in 25%-40% of cases. However, its frequency reaches to 62% following combined CABG and valve surgery[7]. The risk of PoAF in valvular and combined surgery, including coronary and valvular, was reported to be higher than that in coronary surgery alone. Mariscalco et al.[8] identified the PoAF rates as 22.9%, 39.8%, and 45.2% for the isolated CABG, valve surgery, and combined surgery, respectively. Therefore, patients with valvular heart disease were excluded to not affect on the outcome of the study.

Postoperative hypoxemia was shown to be the most common cause of cardiac arrhythmias. COPD is an independent risk factor for arrhythmias, especially for AF and cardiovascular morbidity and mortality. In a large-scale, retrospective, case-control study, patients with COPD had a 4.41 times higher risk of AF and COPD is present in 10-15% of patients with AF[9]. Mathew et al.[10] have showed that COPD increased the incidence of both persistent and paroxysmal AF and the incidence of PoAF increased to 43% in the presence of COPD. For this reason, patients with COPD were not included in order to make our results more accurate.

In majority of the studies, hypertension, diabetes mellitus, left atrium diameter and low ejection fraction were shown to play a role in the development of PoAF[11]. In our study, in terms of these parameters there were not significantly different between the groups. However, these factors which are effective in AF development are included in the logistic regression analysis. Any of these variables were not significantly associated with development of PoAF. These results may contribute to the effectiveness of the vitamin D level which measured for predicting PoAF in this study.

Age-related changes, including atrial fibrosis and accumulation of amyloid, can cause intraatrial reentry which leads to the development of AF[12]. Age has been repeatedly shown to be the major risk factor for AF after cardiac surgery[13]. In our study, significant difference was not observed between two groups in terms of age. But, in terms of in patients with age > 65 years was statistically significant difference between two groups. In our study, in binary logistic regression analysis, age > 65 years was found to be an independent variable predicting the development of PoAF. Cerit et al.[14] found that age was significantly associated with development of PoAF following CABG in univariate logistic regression analysis. In another study, Geçmen et al.[15] showed that age was as an independent variable predicting the development of PoAF in both univariate and multivariate logistic regression analyses. It was found in two different studies that search the relationship between vitamin D and AF in patients undergoing CABG that age was not significantly associated with development of PoAF following CABG[16,17]. Our results were generally consistent with the literature. When age is considered as a risk factor, it is known by researchers that elder patients have a risk for development AF.

On the other hand, The Framingham Heart study, in which approximately 3000 patients were included and follow-up for approximately 10 years. Rienstra et al.[22] found that vitamin D status is not an important contributor to AF in the general population. In a study in which they investigated postoperative AF, Skuladottir et al.[23] found higher preoperative plasma 25(OH) vitamin D2 levels to be associated with an increased risk of POAF. In contrast, they did not observe an association between plasma levels of 25(OH) vitamin D3 or total 25(OH) vitamin D and the incidence of POAF. In another prospective cohort study based on the Rotterdam study, vitamin D level is not associated with AF[5].

In our study, the risk factors for arrhythmia were minimized and provided homogeneity between the groups; lower vitamin D levels would not affect the outcome of the study. It was more important for us that statistical differences in terms of vitamin D levels between groups are statistically significant predictors of postoperative AF development. On the other hand, our study had homogeneity. For this reason, the risk factors for development atrial fibrillation as COPD and valvular heart diseases were excluded. Therefore, the results of our study may be more specific in terms of the relationship between lower vitamin D levels and PoAF.

Limitations of the Study

Our study has some limitations. The small sample size may be considered as the first limitation of this study, but the excess of exclusion criteria minimized the risk factors for PoAF. This may allow us to ignore the size of the sample, which appears to be a limitation of study. Secondly, parathyroid hormone levels were not measured. Also our work was only carried out in the winter and spring seasons. Further prospective studies with a larger number of patients are required.

KKÖ Substantial contributions to the conception or design of the work; or the acquisition, analysis, or interpretation of data for the work; agreement to be accountable for all aspects of the work in ensuring that questions related to the accuracy or integrity of any part of the work are appropriately investigated and resolved; final approval of the version to be published

USS Substantial contributions to the conception or design of the work; or the acquisition, analysis, or interpretation of data for the work; final approval of the version to be published

FT Drafting the work or revising it critically for important intellectual content; final approval of the version to be published

NK Drafting the work or revising it critically for important intellectual content; final approval of the version to be published

SSY Drafting the work or revising it critically for important intellectual content; agreement to be accountable for all aspects of the work in ensuring that questions related to the accuracy or integrity of any part of the work are appropriately investigated and resolved; final approval of the version to be published