The Role of Heart Team Approach in Penetrating Cardiac Trauma: Case Report and Review of the Literature

Penetrating cardiac trauma has been increasing in clinical experience and is joined to important morbidity and mortality. A case of a 38-year-old female with history of postpartum depression was reported, admitted to our department for cardiac tamponade due to penetrating self-inflicted multiple stab wound of the chest complicated by rupture of anterior left ventricular wall and traumatic ventricular septal defect. Following the unstable hemodynamic instability, a combined therapeutic strategy was chosen: surgery and transcatheter implantation to correct free wall ventricle damage and traumatic ventricular septal defect, respectively.

A case of a 38-year-old female with a history of post-partum depression was presented, referring to our hospital for penetrating self-inflicted multiple stab wounds of the chest. Vital signs of arrival were systolic blood pressure of 80/45 mmHg, tachypnea (30 breaths/min) with low oxygen saturation (89%), cyanosis and jugular vein distension (central venous pressure of 15-16 cmH2O). The echocardiography (ECG) documented raised ST, J waves. The fast-transthoracic echocardiogram (TTE) revealed a cardiac tamponade (maximum diameter 3.2 cm) and a VSD (about 1.5-1.8 cm from left ventricle side) with ventricular left-right shunt (Qp:Qs=2, Figures 1A to D). Following the critical hemodynamic deterioration, the norepinephrine and epinephrine infusions were started (0.1 mcg/kg/min) and the patient was immediately operated. Combined unusual therapeutic strategy has been chosen: surgery for the pericardial effusion drainage and control of the ventricular wall wounds, and transcatheter closure of the tVSD. Median sternotomy and a T-inverted pericardiotomy were performed to remove all clots and pericardial effusion from mediastinum. After the detection of the heart, we found a single left ventricle anterior wall wound, hence we directly closed with a direct suture (3-0 prolene with Teflon pledgets). To complete the treatment, the patient underwent a procedure to position the Amplatzer VSD occluder device (16-mm) by transcatheter way in the same operation time (Figures 1E to F and Figure 2B). The procedures were free of complications and the postoperative period was short and uneventfully. She was discharged on the 10th postoperative day with single antiaggregation therapy and was followed-up by psychological support service. 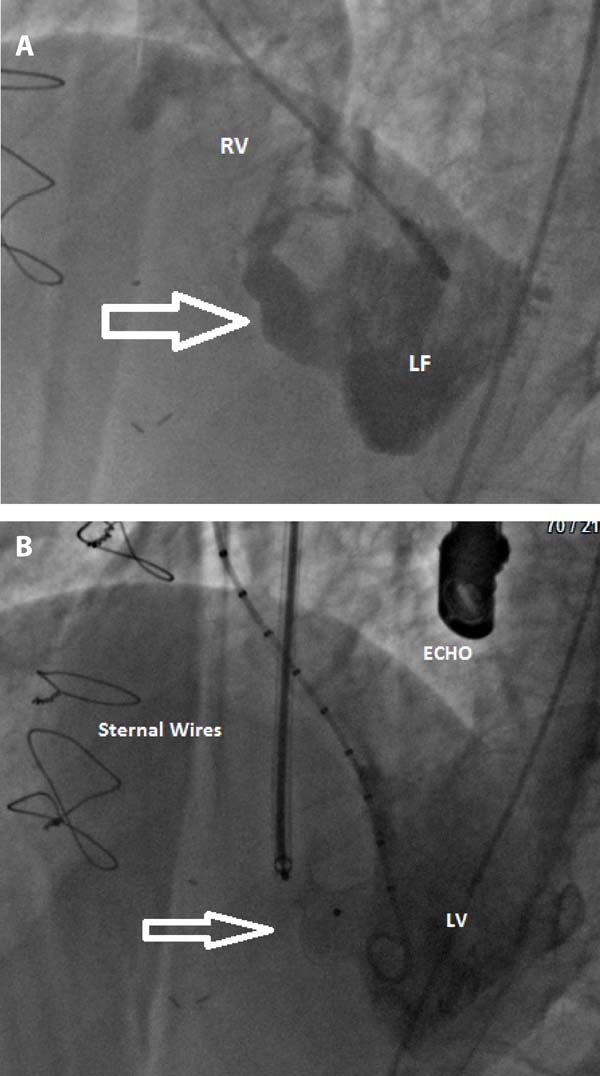 The major cardiac injuries could be blunt or penetrating. Penetrating cardiac trauma has different and several presentations[1-10]. The patient could be presented with a stable tamponade (hypotension, elevated central venous pressure [CVP]) or unstable ones (shock with critical hypotension, tachycardia, dyspnoea, raised CVP, pulsus paradoxus with distant heart sounds and impalpable apex). Our patient fitted in the unstable patient type: the decision needed to be made very quickly[7-15]. The first step was the diagnostic workout (chest X-ray, ECG, computed tomography scan, TTE) that identify and describe the size, type and setting of the lesion and general assessment. In our case, the patient had a cardiac tamponade due to stab complicated to iatrogenic VSD. Therefore, we decided to proceed with combined therapeutic path in the same time: 1) surgical approach to suture ventricular wound and 2) endovascular approach to close iatrogenic VSD with an occluder device. This case is the first reported in scientific literature because the most of the previous article describe single procedure for closure of VSD with occluder device after surgery or only endovascular approach or first endovascular and then surgery correction, but there are not combined procedures in the same time (Table 1), following some of the most important experience in the literature. According to Degiannis et al.[21], surgical approach could be fundamental and the primary step to control the bleeding, in particularly the best is median sternotomy approach which gives an effective and extensive vision of heart, great vessels, to other structures in the mediastinum and to both pleural cavities[1-9,13-16]. On the other hand, left antero-lateral thoracotomy provides rapid access to the right and left ventricles and to the pulmonary artery; this is our approach of choice for emergency room thoracotomy[21]. In case of penetrating cardiac injuries complicated by iatrogenic VSD, the combined therapeutic choice with surgery and percutaneous device was described by Argento et al.[12], in 2002. Afterwards, only three cases by Berry et al.[13] and Ali et al.[17], with good results (low postoperative recovery, total cardiac function restore without any interventricular septum shunt) were published. The use of minimally surgery (opening, controlling and treating the cause of bleeding) associated with the percutaneous occluder device implantation in penetrating cardiac injuries with iatrogenic VSD may be a complete and safe approach to this trauma patient. The tVSD exclusion by percutaneous device avoided long surgical timing hence less invasiveness, no cardiopulmonary bypass, less anesthesia time and recovery time.

The combined therapeutic choice of surgery and interventional approach in case of penetrating cardiac trauma with limited tVSD is indicated and optimal for rapid clinical stabilization.

The rapid and early diagnosis associated with an organized and available cardiac staff (interventional cardiologists and cardiac surgeons) may be a productive collaboration.

We thank Dr. Violini and his staff for the VSD occluder implantation in our patient which greatly improved the case.

4. Asfaw I, Thoms NW, Arbulu A. Interventricular septal defects frompenetrating injuries of the heart: a report of 12 cases and review of theliterature. J Thorac Cardiovasc Surg. 1975;69(3):450-7.

7. Voronov AA, Kuksinskii VE, Il'in AS. Surgical treatment of atraumatic defect of the interventricular septum after a knife wound of theheart. Grudn Khir. 1989;5:90-1.

No financial support.
No conflict of interest

MC First Author, revision and corresponding author; final approval of the version to be published

AP Writting and revision; final approval of the version to be published

FR Revising; final approval of the version to be published

FM Revised critically; final approval of the version to be published