OPCABG for Moderate CIMR in Elderly Patients: a Superior Option?

The number of elderly patients undergoing coronary artery bypass grafting (CABG) is on the rise. The continuing improvements in myocardial infarction management, timely thrombolysis and primary percutaneous intervention techniques have saved many lives. The age of patients presenting for CABG has increased and they have very advanced disease, both anatomically and functionally. Elderly patients have a higher burden of surgical risk factors and reduced functional capacity compared to the young. The prevalence of comorbidities such as cerebrovascular diseases, diabetes mellitus, chronic obstructive pulmonary disease, renal dysfunction and peripheral arterial disease are higher in the elderly. Age is a risk factor for poor operative outcome and elderly patients have worse early evolution in comparison to the young[1].

Optimal management strategy of moderate chronic ischemic mitral regurgitation (CIMR) has long remained controversial. It is now well understood that CIMR is a bad prognostic indicator in coronary artery disease (CAD). Mitral regurgitation begets more mitral regurgitation leading to worsening of mitral regurgitation grade and early progression to left ventricle (LV) dysfunction. Several studies have shown the association of CIMR as a negative determinant of survival in patients with CAD[2-4]. It is now an accepted strategy to surgically address severe CIMR and to do revascularization alone for mild CIMR at the time of myocardial revascularization. Management of moderate CIMR at the time of CABG is a controversial topic and data regarding the same in elderly is scanty. The addition of mitral procedure in this subset is a difficult decision because of added morbidity of cardiopulmonary bypass and cardioplegic arrest for repair. All the studies on chronic CIMR have compared on-pump CABG and CABG + Mitral valve repair (MVRep). Off pump coronary artery bypass grafting (OPCABG) has proven to be a safer alternative to on pump CABG for high risk patients[5] and this has been studied by many investigators[6,7]. This study aims at comparing the outcomes of OPCABG and CABG+MVRep in the setting of moderate CIMR in elderly.

All patients (age > 70 years) who underwent surgery for CAD with moderate CIMR during the study period (January 2007 to December 2014) were included in the study.

Both the groups were divided into two subgroups A & B according to the presence or absence of high operative risk, respectively.

High operative risk is defined as the presence of left ventricular ejection fraction < 30% and one or more of the following risk factors - preoperative renal dysfunction, previous stroke and chronic obstructive pulmonary disease.

All patients underwent myocardial revascularization, which included a left internal mammary artery graft to left anterior descending coronary artery and great saphenous vein graft for other diseased coronary arteries. Group I underwent OPCABG & group II underwent CABG+MVRep with cardiopulmonary bypass support. In the patients who underwent MVRep, the mitral valve was inspected to rule out any structural lesion. MVRep was done using undersized complete semi-rigid ring (Carpentier-Edwards Physio I annuloplasty ring, Edwards Lifesciences, Irvine, CA, USA). All patients had a successful repair which was defined as less than mild mitral regurgitation at the end of the procedure.

All the relevant preoperative, intra-operative and postoperative data were collected from the respective case files after acquiring permission from the institute's ethics committee. They were tabulated for comparison of the subgroups. After acquiring written informed consent, the study cohort was followed up and their functional class, mitral regurgitation grade and survival were recorded.

The definition of moderate ischemic mitral regurgitation followed the guidelines of the American College of Cardiology (ACC), the American Heart Association (AHA), and the American Society of Echocardiography (ASE), and was defined as an effective regurgitant orifice area of 0.20 to 0.39 cm2, a regurgitant volume of 30 to 59 mL per beat, a regurgitant fraction of 30% to 49%, or a vena contracta width of 0.30 to 0.69 cm[8].

• Sepsis: presence of positive blood culture with or without fever and raised white blood cell counts.

The statistical calculations were performed using SPSS software v 20.0 (Chicago, IL, USA) Quantitative data was expressed as mean ± SD whereas qualitative data was expressed as a percentage. Uni-variate analysis of the continuous data was performed using Student's t-test for parametric and Mann-Whitney U-test for non-parametric variables, whereas chi-square test was used for the categorical data. The cut-off value of P<0.05 was considered for the statistical significance. Survival analysis was performed using Kaplan Meier.

All patients underwent complete coronary revascularization. The mean number of grafts in the OPCABG group was 3.14 and in the CABG+MVRep group was 3.21. The mean cardiopulmonary bypass time and mean aortic cross-clamp time in group II were 96.67±20.25 and 66.33±13.14 minutes, respectively.

Comparison Between Group I and II

In a mean follow-up period of five years, both OPCABG and the CABG+MVRep group had improvement in the mitral regurgitation grade and New York Heart Association (NYHA) class. 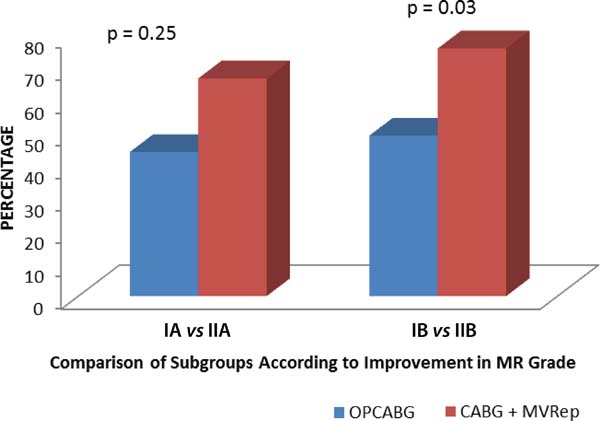 In a mean follow up period of five years, both groups had comparable improvements in their NYHA functional class irrespective of their operative risk. No statistically significant difference among the subgroups in terms of functional class improvement was found (Figure 2). 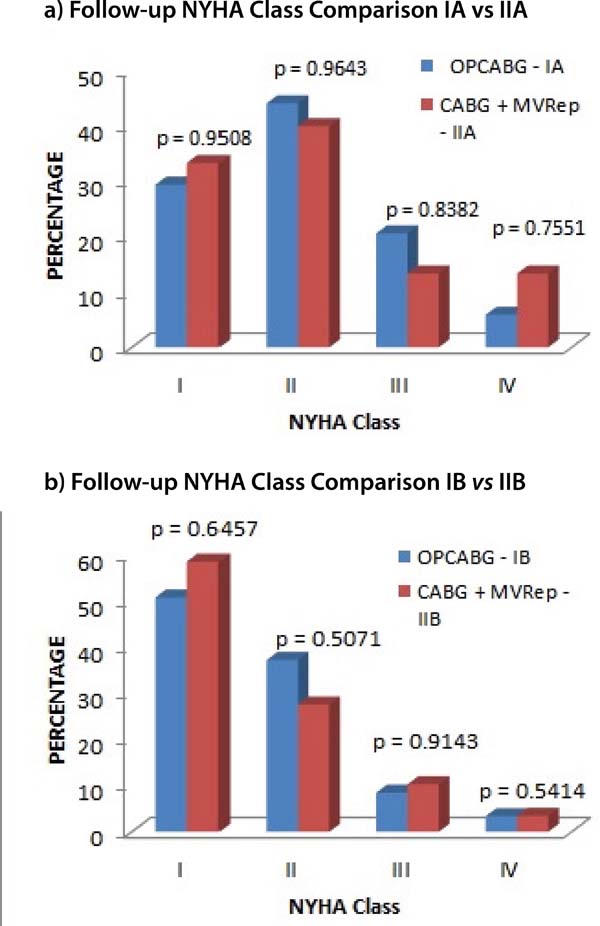 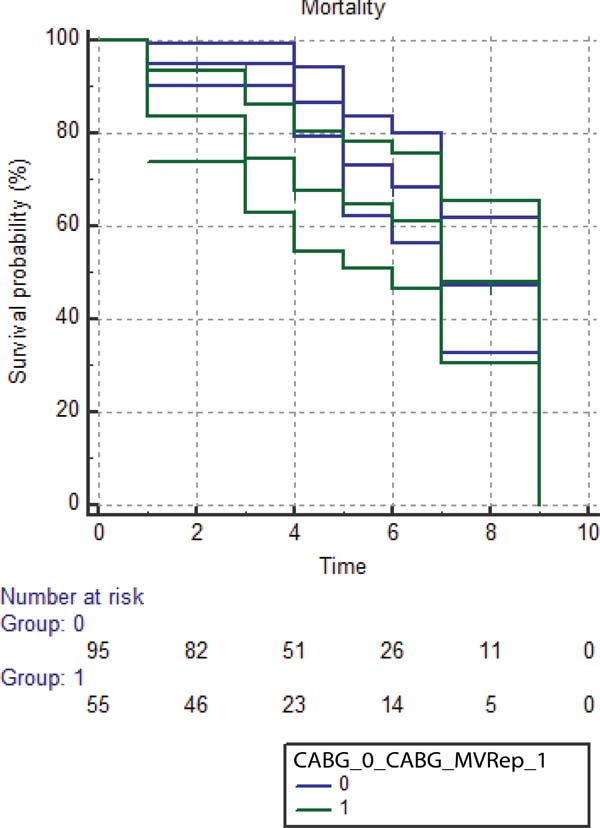 This is probably the first study conducted in the elderly to compare the outcome of OPCABG versus CABG+MVRep for moderate CIMR. The routine use of antiplatelets, statins, beta blockers, and angiotensin converting enzyme inhibitors has greatly extended the age of CAD patients. It is now a common clinical scenario to see septuagenarians undergoing surgical myocardial revascularization. Even a healthy elderly is very different physiologically from a young as they have age-related thickening and stiffening of blood vessel walls leading to less elasticity, reduced diastolic function and poor effort tolerance compared to the young. They have reduced functional reserve of other organ systems compared to the young[9]. The incidence of cardiovascular disease increases as one's age advances. At 60-79 years, 70% will have cardiovascular disease of some form and 21% will have identifiable CAD[10]. This is reflected in our study as our cohort also has higher incidence of comorbidities.

The morbidity and mortality of surgical myocardial revascularization in the elderly have reduced significantly. Off-pump technique has added to the safety of surgical revascularization in the elderly. OPCABG has been shown to have reduced myocardial injury, reduced renal complications, reduced blood product usage and less neurological complications than on-pump CABG[11]. OPCABG can achieve complete revascularization comparable to on-pump CABG as shown in this study (mean number of grafts 3.14 vs. 3.21)[12]. In expert hands, OPCABG can also be safely accomplished in the presence of moderate CIMR.

CIMR involves incomplete closure of structurally normal mitral valve leaflet and is due to CAD that affects the LV geometry causing annular dilatation and tenting of the chordae tendineae[13-15]. Numerous studies have indicated association of CIMR with poor survival rates in CAD patients[16,17]. Surgical correction of moderate CIMR at the time of coronary revascularization is still an unresolved controversy[18-21]. Even in the recent ACC/AHA guidelines (2014), the level of evidence for surgical correction of moderate mitral regurgitation at the time of CABG is class IIB[22]. The addition of MVRep to CABG requires cardiopulmonary bypass with considerable length of aortic cross clamp time. Increased incidence of complications can be attributed to cardiopulmonary bypass in which, tissues and organs may suffer from regional malperfusion. The elderly with reduced functional reserve of many organ systems are more vulnerable to the complications of cardiopulmonary bypass. Extracorporeal circulation leads to various types of cellular injuries[23]. There was an increased incidence of supraventricular arrhythmias in the MVRep group, which may be due to the atrial incision for left atrial exposure. A similar trend of higher complications (24%) with CABG+MVRep group was observed by Smith et al.[24]. Randomized Ischemic Mitral Evaluation (RIME) trial[25] also reported higher complication rates in MVRep group showing that adding MVRep should be weighed against the surgical morbidity and mortality risk the patient is exposed to. In our study, we have noted that CABG+MVRep group had high rate of early operative complications. We feel that the difference in our study is more pronounced as OPCABG group is completely excluded from the complications due to cardiopulmonary bypass.

We have documented in one of our earlier studies that mitral ring annuloplasty with CABG in a selected subgroup with severe CIMR provided mid-term improvement in mitral regurgitation grade and heart failure symptoms and it is a common practice now to repair severe CIMR at the time of revascularization[26]. There is no consensus about the benefits of repair in moderate CIMR. Chan et al.[25] in RIME trial have reported improved functional capacity and increased LV reverse remodelling with MVRep and this finding is contradicted by the observations of Smith et al.[24] who, in their trial had observed similar improvement in functional capacity and insignificant LV reverse remodelling and increased incidence of untoward events in the MVRep group. In our study, there was no significant difference in functional capacity and survival between the groups in a mean follow-up period of five years.

On subgroup analysis, we have found that patients with lower operative risk have better improvement in mitral regurgitation grade from CABG+MVRep as compared to OPCABG. We propose that they are probably the subgroup of elderly patients who can be considered for adding MVRep along with revascularization for moderate CIMR, but at the cost of a higher early postoperative complication rate.

Majority of the elderly patients have limited physical activity in their routine lifestyle and their life expectancy is limited. OPCABG can achieve complete revascularization, is less morbid, and provides comparable benefits in terms of functional class improvement and survival in the long term in comparison with CABG + MVRep for elderly patients with moderate CIMR.

AM Substantial contributions to the conception or design of the work; or the acquisition; final approval of the version to be published

CA Drafting the work or revising it critically for important intellectual content; final approval of the version to be published

VW Drafting the work or revising it critically for important intellectual content; final approval of the version to be published

SS Agreement to be accountable for all aspects of the work in ensuring that questions related to the accuracy or integrity of any part of the work are appropriately investigated and resolved; final approval of the version to be published

PS Final approval of the version to be published

KP Integrity of any part of the work are appropriately investigated and resolved; final approval of the version to be published

KS Acquisition, analysis, or interpretation of data for the work; final approval of the version to be published

PS Analysis, or interpretation of data for the work; final approval of the version to be published