Multiple organ dysfunction syndrome (MODS) is defined as "the presence of altered organ function in an acutely ill patient such that homeostasis cannot be maintained with intervention"[1]. It is a cause of high mortality and morbidity in Intensive Care Unit (ICU)[2]. Many advances have been made in the treatment of MODS. Hypothermia has become an established therapeutic concept in the treatment of cardiovascular and neurological diseases[3], and it has shown myocardial and neurological protection, yet the benefits for MODS after cardiac surgery have not been well defined. We hypothesized that mild hypothermia has organ protective effects and can ameliorate organ dysfunction to improve the survival rate for the patients with MODS after cardiopulmonary bypass (CPB) cardiac surgery.

The study was designed as prospective unblended intervention trial where patients served as their own controls. This study protocol was approved by the ethics committee of the First Affiliated Hospital of China Medical University. The patients with MODS after cardiac surgery underdoing CPB from May 2011 to February 2015 were screened for this study. The cardiac function of all the patients was class II-III (New York Heart Association).

Exclusion criteria: patients with respiratory, nervous, hematological system diseases or liver, kidney, digestive system diseases before surgery; patients with massive blood transfusion (massive blood transfusion defined as the replacement of a patients' total blood volume in less than 24 hours, or as the acute administration more than half the patients' estimated blood volume per hour); patients died within 24 hours after ICU admission.

The MODS diagnosis criterion of MODS[4] is shown in Table 1. 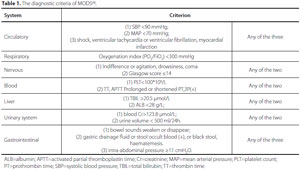 All the patients used urine catheter with temperature probe by which we can monitore the patients' bladder temperature. At the admission to Cardiac Surgery ICU, the patients were assisted by ventilator, tidal volume (ml) = Body weight (kg)*10(ml/kg); respiratory frequency 12-14 times/min; FiO2:0.50-0.75. At the same time, intravenous sedation and muscular relaxation agent were infused. We used the echocardiography to monitor cardiac stroke volume (SV), then we calculated cardiac index (CI), CI=heart rate (HR)*SV/body surface area (BSA).

The basic treatments for the patients of the two groups are same, including intravenous infusion of vasoactive agents to maintain hemodynamic stability and improve organs function. However, in the hypothermia group (HT), hypothermia treatment was implemented by a computer cooling blanket (CJ1 temperature lowering instrument). The patient was placed on the blanket which is filled with the variable temperature cycle of cryogenic mat. We adjusted the temperature of cooling blanket until the patients' bladder temperature reached and maintained 35ºC. The cooling rate was about 1.0ºC/h[5]. The bladder temperature was reduced from 36.1ºC±0.2ºC to 33.1ºC±0.1ºC within 168±10min of starting cooling and remained lowered at 32.9±0.5ºC during 36 hours.

If patients' postoperative test results (we marked it as precooling) showed two or more abnormal organ function, we considered the existence of MODS. The patients were randomly divided into two groups, one is northermia group (NT) n=71, the other one is HT (hypothermia group) n=89. Then we immediately began cooling the HT (we marked the time as 0h), meanwhile all patients were drawn arterial blood and venous blood to test blood gas, liver and kidney function, blood coagulation function, and evaluated the cardiac function using echocardiography from 12 to 36 hours. We monitored each patient closely about the parameters of vital signs: mean arterial pressure (MAP), HR, urinary volume. 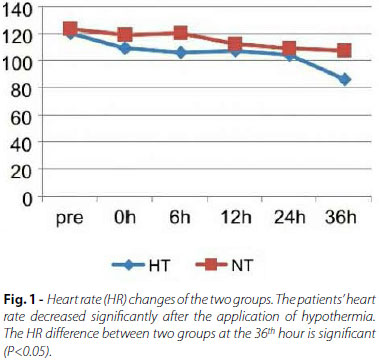 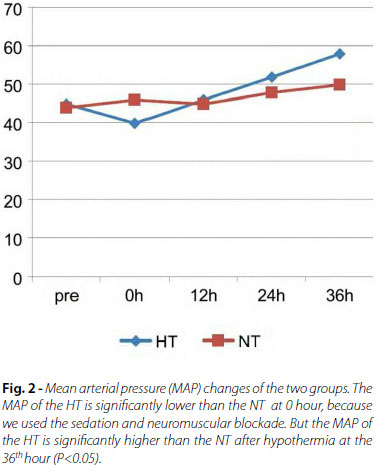 The first major finding of the present study is that the induction of mild hypothermia until the 36th hour is feasible and safe for patients with MODS after CPB. There are several proposed mechanisms for the development of MODS, including[6]:(1) cell or tissue hypoxia; (2) induction of cellular apoptosis; (3) translocation of microbes or components of microbes from the gastrointestinal tract; (4) immune system dysregulation, and (5) mitochondrial dysfunction. The predominant failure organs involved in MODS are hepatic, respiratory, gastrointestinal, cardiovascular, coagulation, renal, central nervous and endocrine systems[7]. Most cardiac surgery need CPB, but intra-operation of cardiac surgery, CPB can lead to a variety of inflammatory medium content increased significantly. As a result abnormal cytokine expression and systemic inflammatory reaction in tissues impaired the organs function[8], and even lead to further multiple organ dysfunction[9].

Some studies have shown that mild hypothermia inhibits inflammation reaction, inhibit the release and expression of TNF-alpha and ICAM-1, and protect the organ function. In the hypothermia application process, it should be fully realized the side effect as its influence on blood coagulation function and so on. But in our study, we did not observe any complication of clinical relevance associated with mild hypothermia, especially bleeding, thrombosis, arterial or pulmonary embolism and no adverse haemodynamic events. Rodriguez et al.[17] showed that, in the case of patients with chill, oxygen consumption will increase by 45%. Frank et al.[18] found that for patients with a history of myocardial ischemia, chill increased the risk of myocardial infarction, so we should use sedation and neuromuscular blockade to anti-shiver in the duration of hypothermia.

The second major finding is that moderate hypothermia significantly improves parameters of organ function in the patients with MODS after CPB surgery. Low cardiac output syndrome (LCOS) is a predominant cause of the MODS after cardiac surgery[19], meanwhile, MODS may lead to cardiovascular dysfunction characterized by biventricular dilatation, decreased ejection fraction and hypotension[20]. Then MODS may lead to form a vicious circle, and make the condition worse. So, in order to treat the MODS after cardiac surgery, correcting heart function effectively is the most important. Because of the improvement of cardiac function, the perfusion of the other organs was improved and the organ functions were improved further. As cardiac power output predicts mortality during LCOS[21], our data indicate that the improvement to the patients with MODS after CPB surgery in the hypothermia group may in part be related to improved cardiac performance. In a situation of severely depressed left ventricle function, cooling may improve systemic oxygen supply-demand balance not only by reducing demand but also by increasing cardiac output via its positive inotropic effect[22]. The positive inotropic effect of hypothermia has been confirmed by Gotberg et al.[23] using whole-animal models of cardiogenic shock. The inotropic effect of hypothermia is associated with an effect at the level of myofilaments[24], without causing changes in sarcoplasmatic calcium content or intracellular calcium concentration[25]. This implies that hypothermia can recruit a contractile reserve without increasing energy demand. In the acute myocardial infarction model, therapeutic hypothermia has been proved that it improves myocardial dysfunction by reducing ischemia-reperfusion injury and results in a decreased size of infarction[26,27]. Ristagno et al.[28] studied the effect of hypothermia on ventricular myocyte contractility, and discovered that hypothermia increased ventricular myocyte contractility either under conditions of normal perfusion or after perfusion following a 10 min interval of ischemia. Shattock & Bers[29] and Miao & Lynch[30] showed that hypothermia increases in myocardial force generation and this was confirmed by Fukunami & Hearse[31] and Nishimura et al.[32]. Suga et al.[33] resported that cardiac cooling increased ventricular end-systolic maximum elastance (Emax) without affecting systolic pressure-volume area (PVA)-independent VO2 and has energetically more advantages in saving myocardial oxygen-consumption compared to catecholamine in cross circulated canine heart preparations.

Some limitations of our study should be acknowledged. Firstly, this study was designed as a prospective unblended intervention trial, so there is a chance that sicker patients might have been considered for normothermia. But in our study, the initial parameters have no significant differences between the two groups. So the authors think the potential bias induced by that is limited. Another limitation is the information on temperature. We recorded the time in which TH was reached, but we didn't document the course of the temperature during rewarming. Thus, maybe further research is needed to identify the effect of the course of rewarming on mortality.

In summary, our studies demonstrate that mild hypothermia is feasible and safe also for patients with MODS after CPB surgery. Mild hypothermia can improve the organ function effectively, and improve the morbidity and mortality of the patients. It can slow the MODS/Systemic inflammatory response syndrome (SIRS) development speed and reduce the time of protection and further treatment for cells and organs.

1. American College of Chest Physicians/Society of Critical Care Medicine Consensus Conference: definition for sepsis and organ failure and guidelines for the use of innovative therapies in sepsis. Crit Care Med. 1992;20(6):864-74. [MedLine]