OBJECTIVE: The diagnosis and treatment of sternal wound infections with mycobacteria are challenging. Such an infection is often associated with a delayed diagnosis and improper treatment that may lead to a worsened clinical outcome. The present study is designed to highlight its clinical features so as to facilitate a prompt diagnosis and timely treatment.
METHODS: MEDLINE, Highwire Press, and Google search engine were searched for publications in the English language, with no time limit, reporting on sternal wound infection caused by tuberculosis after cardiac surgery.
RESULTS: A total of 12 articles reporting on 14 patients were included in this study. Coronary artery bypass grafting was the underlying surgical procedure in more than half of the cases. Purulent discharge and cold abscess were the two main presenting symptoms. Diagnosis of sternal wound infection was evidenced in all 14 patients by different investigations, with culture of samples being the most sensitive method of identifying the pathogen. Good response to first-line anti-tuberculous agents was noted. Almost all patients required surgical debridement/resection and, sometimes, sternal reconstruction. A delayed diagnosis of sternal wound infection may lead to repeated recurrences. A comparison between patients with sternal wound infection due to tuberculosis and non-tuberculous mycobacterial infections showed that the former infections took an even longer period of time. Comparisons also revealed patients with sternal tuberculosis infection had a significantly higher mortality than patients with sternal non-tuberculous infection (29.2% vs. 0%, P=0.051).
CONCLUSION: Sternal infection caused by tuberculosis after cardiac surgery has a longer latency, better response to first-line drugs, and better outcomes in comparison with non-tuberculous sternal infection. Early diagnosis and early anti-tuberculous treatment can surely improve the patients' prognosis.

Mediastinitis is a serious complication of median sternotomy and is associated with significant morbidity and mortality[1]. Although sternal wound infections after cardiac operations through median sternotomy are uncommon, with a prevalence of only 0.4-5.0% of the cases[2], they are associated with increased morbidity, prolonged hospital stay, and increased costs[3]. The risk factors of sternal wound infections have been sufficiently described[4-7]. The most common causative pathogen was Staphylococcus aureus, accounting for 28-58.1%, followed by Acinetobacter spp (20%)[8-10].

Due to the rarity of the condition, all the discovered articles reported only sporadic single or small series without a large population. Data were extracted mainly from the text. Variables included study population, demographics, clinical manifestations of sternal infection, predisposing risk factors, previous heart surgery, interval between cardiac surgery and sternal infection, sites of infections, diagnostic imaging, pathogen investigations, and anti-tuberculosis as well as surgical management strategies, length of follow-up, and main outcomes. 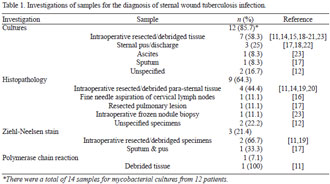 Mycobacterium tuberculosis is a member of the slow-growing pathogenic mycobacterial species, characterized by a 12- to 24-hour division rate and prolonged culture period on agar of up to 21 days[27]. Hosts of tuberculous infections may be in a latent period with no symptoms for years or decades, allowing the establishment of a chronic asymptomatic infection, followed by reactivation and transmission years later to new uninfected hosts[27].

This study showed that 8 (57.1%) patients with sternal wound infection caused by tuberculosis had a history of coronary artery bypass grafting. The most common manifestation was purulent discharge, followed by cold abscess. The diagnosis of sternal infection due to tuberculosis can be made primarily from the bony destruction, and eventually it will depend on pathogen investigations by culture and histopathology of aspirated/debrided/resected tissue. Besides, Ziehl-Neelsen stain and polymerase chain reaction can be valuable for pathogen screening. Delayed diagnoses may lead to recurrence and protracted course of disease. All patients responded well to first-line anti-tuberculous drugs. Most of the patients required surgical treatment, with nearly half requiring extensive resection with chest wall reconstruction.

Rapidly growing mycobacteria is largely present in our living environment. It is usually resistant to first-line anti-tuberculosis agents[28] in addition to being commonly resistant to sterilizers, disinfectants, and antiseptics[29]. Therefore, non-tuberculous mycobacteria may contaminate medical devices such as heart valve prosthesis, and it can be associated with nosocomial outbreaks.