The anesthetic management of patients undergoing cardiac surgery had as standard anesthetic technique the use of high doses of opioids. With this technique patients were extubated after long hours postoperatively, which caused a longer stay in the intensive care unit (ICU), possible complications and increased morbidity and mortality, generating higher costs to the system health[1].

From the 90s, several studies have shown that the use of anesthetic technique that enabled early extubation after cardiac surgery, is a key factor for early discharge[1,2]. Krohn et al.[3], described the first rapid management which has been named fast-track. Anesthetic practice adapted to fast-track uses short-term drug or the long-term low dose, targeting an extubation within 6 to 8 hours (fast-track anesthesia)[1,2]. Other studies have shown that early extubation is safe and is associated with lower costs[4,5]. This type of management is considered the current standard in various referral centers for cardiac surgery[2].

Walji et al.[6] described a protocol that allowed ultra-early hospital discharge, between the 1st and the 4th postoperative (PO) day, which became known as ultra-fast-track management (UFT). This term was extended later to anesthesia as a reference to an anesthetic technique that allows ultra-early extubation in the operating room (ultra-fast-track anesthesia – UFTA)[2]. Several studies have shown the safety of this new type of anesthetic management in adult and pediatric patients[7-11].

Pulmonary hypertension (PH) is common in patients with heart disease, being the echocardiography the most useful noninvasive test for evaluating patients with clinical features of PH[12].

The literature does not indicate whether PH, as a prior disease, affects the UFTA of adult patients undergoing cardiac surgery. Most available studies have been performed in children or limited to reports of a few cases in adults with conflicting results.

The aim of this study was to assess the influence of the previous PH in UFTA of adult patients undergoing cardiac surgery.

This was a retrospective study in which the medical records of patients undergoing cardiac surgery and UFTA were analyzed in the period from January to June 2011, at the Cardiovascular Surgery Service of the Josina Machel Hospital - Luanda/Angola.

Forty patients were included in the study. Patients were divided into two groups: Group 1 (GI) - without PH; Group 2 (GII) - with PH.

Data for determining the presence or absence of PH were obtained by transthoracic echocardiography.

It was considered as the absence of PH: a systolic pulmonary artery pressure (sPAP) <36 mmHg, with tricuspid regurgitant velocity <2.8 m/s and no additional echocardiographic signs of PH[13,14]. The presence of PH was considered when: sPAP >40 mmHg associated with additional echocardiographic signs of PH[13,14].

The following patients were excluded from the study: patients with sPAP between 36 and 40 mmHg (patients who would need further investigation to confirm PH)[14], patients under the age of 18 years, who underwent surgery without CPB, with aortic disease or undergoing aortic surgery.

We considered as criteria for extubation patients who presented at the end of surgery: 1) hemodynamically stable or under use of low dose vasoactive drug; 2) balanced at the electrolyte and acid-base viewpoint (by arterial blood gases); 3) with adequate analgesia; 4) with enough level of consciousness to the respiratory control; 5) without respiratory complications from the surgical procedure; 6) without major bleeding.

Three factors were assessed to determine if there was PH's influence on UFTA, leading to failure in technique: 1) the impossibility of extubation in the operating room; 2) the extended period of time to extubation; 3) the need for reintubation within 24 hours PO.

Statistical analysis was performed using R software version 3.0.3. To verify the homogeneity of the groups regarding the study variables, the Mann-Whitney test for quantitative variables and the chi-square test and Fisher exact for categorical variables were used. To assess whether there were factors that influence the time interval for extubation we used Log-Linear regression analysis via Quasi-Likelihood, with univariate and multivariate analyzes through the Backward and Forward procedures, and the final regression being for the time extubation called Log-Linear Stepwise. To assess whether there were factors that influence the reintubation the univariate analysis was performed, using for such, Mann-Whitney tests for quantitative variables and the Fisher exact test for categorical variables. At the end of all the analyzes the Statistical significance was defined with "P" values less than 5% (P<0.05).

This study was approved by the Research Ethics Committee of the Josina Machel Hospital where the written informed consent of the patients was delivered.

The 40 patients studied had undergone various types of surgery, the vast majority valve surgeries, predominantly surgeries involving the mitral valve. The number of patients distributed between the two groups was very close, and the GI was composed of 21 patients and GII composed of 19 patients. In GII most patients (63.16%) had moderate PH, and the average sPAP in this group was 64.15±17.78 mmHg (minimum sPAP of 44 mmHg and maximum of 121 mmHg) (Tables 1 and 2). 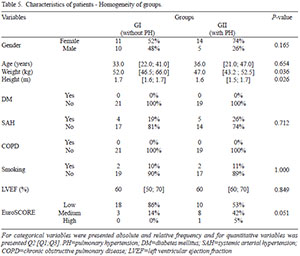 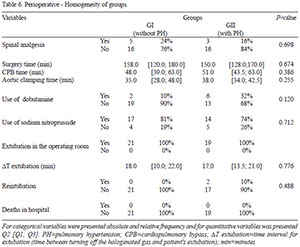 The groups were not homogeneous with respect to two variables, the weight and height, and the median for these variables were significantly higher in GI when compared to GII, with a P value of 0.036 for weight and 0.026 for height (Table 5).

In GII there were 2 patients who were reintubated in the first 24 hours postoperatively; however, with no statistical difference when compared to GI (P=0.488). No variable influenced the reintubation. This finding was mainly due to the small sample size (Table 8). 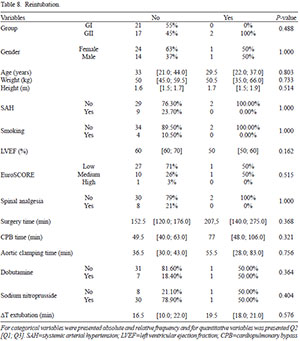 This study assessed young adults, predominantly female, with few comorbidities, with low to moderate cardiovascular risk, mostly affected by heart valve disease with prevalence of mitral valve disease. Only two patients underwent coronary artery bypass graft (CABG), but these were excluded for not using CPB. The results found in this study was similar to other cardiac surgery services in sub-Saharan Africa in terms of patient characteristics and operated pathologies, where rheumatic fever is highly prevalent, and is a major cause of valve disease with surgical need in young adults[15-17]. The coronary diseases are uncommon in this population, probably due to low life expectation.

Borraci et al.[18] analyzing the causes of failure in UFTA in coronary artery bypass graft surgery (CABG), valve or combined, observed that the factors that may predict difficulty of extubation in the operating room in surgery with cardiopulmonary bypass (CPB) are: heart failure, left ventricular dysfunction, emergency surgery, prolonged time of aortic clamping, difficulty to exit CPB and the need for pacemaker use; and in surgeries without CPB: lung disease, obesity, emergency surgery, the need for pacemaker use and hemodynamic instability. Dáyan et al.[19] cited as possible causes of failure of UFTA: female gender, obesity and a history of cardiac failure. Royse et al.[20] reported severe pulmonary hypertension as a cause of failure in one of its UFTA pacientes. Vida et al.[21], on the other hand, analyzing children, concluded that PH does not contraindicate early extubation.

Rady et al.[22], in a cohort study of 11,330 patients admitted to the ICU, analyzing the causes of extubation failure (requiring reintubation and mechanical ventilation), cited, among other causes, PH.

All study patients were extubated in the operating room. No single factor led to extubation failure. The sPAP in the GII ranged 44-121 mmHg, and even patients with severe HP were extubated, so that the PH had no influence at the time of extubation.

Most studies with extubation in operating room in adults were performed in patients undergoing off-pump surgery. If we consider the majority of the available studies involving patients undergoing on-pump and off-pump surgery, extubation rate in the operating room varies from 42 to 100%. Some authors cite the time to extubation ranging between 10 and 20 minutes after skin closure, others mention only the patients who were extubated[3,7-9,18,19]. Only two studies in the literature involving surgery with CPB in adults showed rate of 100% immediate extubation. The study by Hermmeling et al.[8] with 45 patients who were extubated within 15 minutes of the end of the surgery, in which balanced anesthesia was used with a low dose of fentanyl and maintenance with sevoflurane and the study of Oxelbark et al.[9] with 250 consecutive patients, all of which being extubated within 10 minutes from skin closure. In the latter study total intravenous anesthesia with propofol and remifentanil was used. In both cases thoracic epidural analgesia (TEA) was performed. Neither studies report PH as an aggravating factor. In another study by Hermmeling et al.[23] in patients operated without CPB and TEA, undergoing UFTA, compared the effects of isoflurane and sevoflurane between two groups of patients. There was no difference in terms of myocardial protection, cardiac contractility and hemodynamic stability, but the time to extubation was significantly lower in the group using sevoflurane (10±5 minutes) compared to the group using isoflurane (18±4 minutes).

Extubation rate in our study was 100%, with an average time interval for extubation of 17.58±8.06 min, with a median of 18 min in GI and 17 min in GII - no statistical difference between the two groups. PH had no influence on the time interval for extubation of patients. We believe that the fact that we used as halogenated isoflurane may have been the cause of a slightly longer time for extubation compared to studies by Hermmeling et al.[8] and Oxelbark et al.[9] In the present study TEA was not performed, analgesia was performed with spinal morphine (in 8 patients) associated with venous analgesia or only venous analgesia, and this factor had no influence on UFTA.

In the first 24 hours after surgery, 2 patients of GII required reintubation, representing 5% of patients. The reintubation rate presented in the study is within the range reported in the literature in UFTA ranging 0 to 8%[7-9,18,19,23]. There was no statistical difference between the two groups. PH and any other factor influenced the reintubation.

When assessing the causes of reintubation of two patients, one was reintubated by CO2 retention and another was reintubated due to seizure followed by cardiorespiratory arrest (CPA). The first patient was extubated again one hour later and the second after 24 hours of intubation. It was found in the history of the first patient that he had important area of pulmonary fibrosis due to tuberculosis sequel, frequent pathology in developing countries in Africa. This may have been responsible for respiratory complication of this patient in the PO and likely because of his reintubation. The opening of the left chambers in cardiac surgery predisposes to gas embolism, which we believe have been the cause of the seizure of the latter patient, since it had no history of seizures before surgery. The major causes of reintubation in UFTA cited in the literature are: respiratory depression and bleeding[18,19]. The seizure has not been among them. We suggest giving special importance to the history of pulmonary disease in patients eligible for UFTA and the patients carriers of such disease should perhaps be referred under intubation to ICU, and consider the time of heart deaeration (removal of intracardiac air) as a surgical time to be respected, in order to avoid postoperative complications leading to reintubation.

We consider the main limitation of this study the small number of patients, being necessary to the future, to perform studies with a larger population in order to generate a more solid evidence on the subject.

PH had no influence on UFTA in adult heart surgery, because it did not preclude the extubation in the operating room, it did not increase the time interval for extubation and it was not cause of reintubation of patients in the first 24 hours postoperatively. In the population studied pulmonary hypertension had no effect on in-hospital mortality.

PSS: Analysis and/or interpretation of data; final approval of the manuscript; Conception and study design; Implementation of projects and/or experiments; manuscript writing or critical review of its contents