Upon physical examination the patient was in regular state: pale, hydrated, eupneic and afebrile. Regular heart rhythm with systolic murmur 4 + / 6 + and tachycardia. Clear lung sounds. Distended and painful abdomen upon palpation, along with hepatomegaly (liver palpable at 2.36 inches from the right costal margin). Blood pressure and heart rate were normal in all four limbs and without edema.

Sinus rhythm with a heart rate of 122 beats/min, QRS axis + 30º and PR interval of 0.12 s. Overload in both atria without ventricular overload. Ventricular repolarization unchanged.

Visceral situs solitus in levocardia. Increased cardiac area with a cardiothoracic index of 0.65 and pulmonary vasculature within normal limits.

Presence of large pediculated, lobed and homogeneous mass originating from the atrial septum occupying both right and left atria and projecting into the biventricular inlet tract during diastole, causing blood flow obstruction. Normal ejection fraction (Figures 1A and 1B).

Myxomas represent around half of all heart tumors and may be associated with dominant family autosomal syndromes. The majority of them affects the left atrium, but can be present in other sites. The main differential diagnosis is rhabdomyoma[1].

The suggestive clinical status of low cardiac output, altered cardiac auscultation and the presence of two intracardiac tumor mass on echocardiography were fundamental for the diagnosis and surgical resection indication[1,2].

The radiological exam used for this diagnosis was the echocardiogram because it is a non-invasive exam and has an excellent sensitive. The histologic diagnosis was confirmed by pathological examination after operation, as it is shown in Figure 2[3,4]. 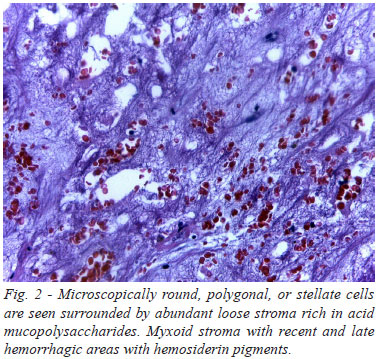 Right atrium was opened and large gelatinous mass was found, darkened and ocher colored. It was pulled gently releasing the entire right ventricular inlet and noting that there was no adhesion of the mass to the right atrial or ventricular walls, just fixed to the atrial septum. It was opted for resection of the atrial septum since the additional tests showed presence of mass also occluding the left side. After opening the atrial septum it was observed that the tumor obstructing both sides originated from the same site.

The atrial septum was completely resected along with the tumor, which also showed no adhesions in the left cavities, subsequently reconstructed with bovine Braile Biomédica® pericardial patch in a conventional way (Figures 3A, 3B and 3C).

The CPB time was of 50 minutes and myocardial ischemia of 34 minutes at 93ºF.

The postoperative period was uneventful with hospital discharge after six days of hospitalization.

To our Nurse Educator Bruna Cury from Hospital da Criança e Maternidade de São José do Rio Preto, SP for her collaboration in elaborating this text into the English language.