In Brazil, more than 100,000 heart surgeries are performed each year[1]. In Recife, at Real Hospital Português de Beneficência in Pernambuco (RHP) only, 1,400 surgeries are performed every year, demonstrating the significance of the procedure in our country. Many patients develop complications that affect the results, increasing morbidity and mortality at the individual level, and burdening the health care system. In heart surgery, three major events, when present, increase the chances of death: the development of respiratory infection, perioperative stroke and renal failure dialysis (RFD)[2,3], Besides associated with higher mortality, such occurrences are important causes of readmission to the intensive care unit, increasing hospital costs[4].

An important determinant of bad results in cardiac surgery is the infection[5], especially the respiratory infection, the most frequent in this type of procedure - it exceeds 50% of high mortality infections[6]. It is also known that the early identification of patients at higher risk of developing this complication and the adoption of prophylactic measures can reduce the mortality rate significantly[7-9].

The lack of local studies to determine the prevalence and the impact of renal tract infection (RTI) justifies this study. The understanding of this problem in our region can help implement intervention strategies that change the current situation.

The aim of this study is to assess the impact of respiratory tract infection in cardiac surgery postoperative period in RHP, especially regarding the hospital mortality, and to identify patients at higher risk of developing this complication.

We used a cross sectional observational study that was made by the Thoracic Surgery Recuperation Unit (TSRU) of RHP.

Data were collected from existing database containing information of 900 patients operated and admitted to the TSRU of RHP, from July 1st 2008 to July 31st 2009.

The sample was initially composed by 109 patients, being two later excluded because of lack of data. The 107 remaining patients were divided into 02 groups: one defined as RTI Group, composed by 29 patients who developed respiratory tract infection, and Control Group, made up of 78 patients without RTI.

The variable used to pair the two groups was the type of performed surgery. Thus the type of surgery proportion performed on the RTI group was determined. Then there was a randomization among patients who did not develop RTI and were part of the database, thus forming the control group, with 78 patients.

For the RTI diagnosis, we used clinical respiratory infection parameters associated with tracheal aspirate secretion culture, with colony counts equal to or greater than one million units.

The sample size calculation was based on the RTI development prevalence in cardiac surgery postoperative, existing in the literature.

To compare the averages of different groups, we used the t-test when the variables followed a normal distribution. For variables that did not follow this distribution, we used non-parametric tests (Wilcoxon). For association studies, we used the chi-square test or Fisher's exact when indicated.

When the alternative hypothesis was sought, P<0.05 were considered statistically significant.

The sample was composed by 107 patients, divided into 2 groups: with and without RTI.

After pairing the groups, it was observed that they had no difference in age average (P=0.17), gender distribution (P=0.94) and type of performed surgery (P=0.85-1.00), demonstrating the similarity of the population of the two groups.

A higher average value of the EuroSCORE was observed in the group WITH RTI, compared to the control group, (WITHOUT RTI), with a tendency to statistical significance (P=0.07).

The length of hospital stays and ICU length stay was significantly higher in the group WITH RTI compared to the control group (P<0.0001 and P=0.002 respectively), as Figures 1 and 2 show. 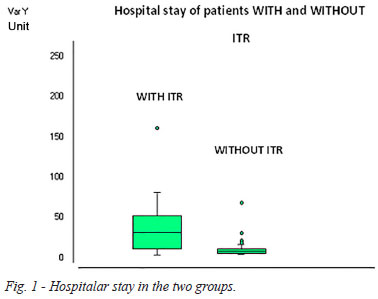 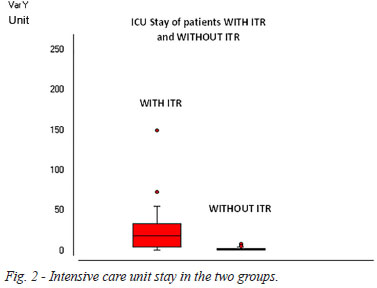 In the group with RTI an important association of RTI with the development of other complications, such as renal failure dialysis (RFD) and stroke (P<0.0001 and P=0.002 respectively). This association was not observed in the control group (Table 1).

Analysis showed the similarity between control groups and disease, the result of proper pairing. No differences were observed between the analyzed groups in relation to gender distribution, age average and performed surgery. Pairing by type of surgery performed eliminated an important bias, since most complex surgeries tend to have higher prevalence of complications[10-12].

A second bias that could sully the results would be the inappropriate use of perioperative antibiotics, or patients who have been operated in the presence of respiratory infection. However all patients enrolled in the study underwent elective surgery and therefore evaluated before discarding infection prior surgery. All patients were subjected to the same antibiotic scheme.

The RTI group had higher EuroSCORE[13] average compared to no RTI, with a tendency to statistical significance. That is, higher prevalence of RTIs in high-risk patients, which confirms the results of studies that associate higher risk (such as age, diabetes and kidney disease) to the higher prevalence of complications[14-16].

Mortality in patients with RTI was significantly higher than in the group without RTI, as demonstrated in the literature[17,18].

The length of hospital stay and the time of ICU stay were significantly higher in the group with RTI compared to the control group. This fact implies probably a higher cost, as intensive care units (ICUs) make up about 20% of total hospital costs[19]. Data from this study, in line with published data, show that the existence of complications after heart surgery is directly related to a longer hospital stays and higher mortality rate[20].

Cardiac surgery has as primarily non-cardiac complications the development of infection (most respiratory), IRA and stroke[21]. This was observed in this study, and it is interesting to note the fact that the RFD and stroke are most commonly associated with respiratory infection. That is, the RTI is strongly associated with such complications. Failure to observe the presence of RFD and stroke in the group without RTI reinforces this claim.

The development of RTI in cardiac surgery postoperative is related to higher mortality, as well as to longer hospital and ICU stay. This complication has also been associated with the development of other co-morbidities such as renal failure dialysis and stroke.

FRMN: Final approval of the manuscript