A non negligible number of patients who undergo surgical repair of incomplete atrioventricular septal defect (AVSD) are discharged from hospital with residual left atrioventricular valve regurgitation (LAVVR)[1,2]. Reoperation rates for LAVVR are still relatively high, varying between 7% and 22%[1,3-6]. Many factors associated to reoperation have been proposed[1,2,4,6], but there is a lack of data reporting factors associated with immediate postoperative LAVVR, although the reports of valve replacement and of in-hospital deaths due to significant residual LAVVR within 30 days of operation[1,5,7].

To improve these statistics, a clear outline of the predisposing factors leading to a worse immediate surgical outcome is essential. The goal of this study was to assess whether some of the previous risk factors published in the literature would be associated to an at least moderate LAVVR within 30 days of surgical repair at our practice, in Brazil.

This study was approved by the ethics committee of our institution (protocol CEP 3802/2010), a tertiary-care hospital with a division of pediatric cardiology and cardiovascular surgery in Brazil, which waived the need for patient consent. The medical records of all patients 14 years old and younger who had undergone repair of incomplete (partial or transitional) AVSD at our practice between March 2002 and April 2010 were reviewed. Patients with any right ventricle obstruction, and those who had a previous pulmonary banding were excluded.

The reports of the transthoracic echocardiograms performed before and after operation were reviewed. These exams were performed by one of two physicians using commercially available machines, HDI 5000CV (ATL Ultrasound), Envisor-C and HD11 (Philips Ultrasound, Bothell, WA, USA), with 3 to 8 MHz probes. For further analysis, there were considered the exam before surgery and the exam closer to the 30th postoperative day, while still being within 1 month of the repair.

These were the factors assessed: preoperative (age, weight, absence of Down syndrome and grade of LAVVR), intraoperative (abnormalities on the AV valve morphology and the need for use of annuloplasty). Abnormalities on the AV valve morphology were subjectively described by the surgeon. Transesophageal echocardiography was not available during the period in which the patients were operated on.

Pre- and post-surgical LAVVR was graded based on the appearance of the color Doppler jets in relation to the left atrium (8): I=absent or trivial; II=mild; III=moderate; IV=severe. The categorizations were based just on official written summaries of the exams. Images stored on tapes or in digital media were not assessed.

Continuous variables were expressed as mean or median, and comparisons were made using the two-sided Mann-Whitney test. Categorical variables were expressed using frequency distribution and percentages, and comparisons were made using the Fisher exact test. For the analyses of variances, the Kruskal-Wallis test was used. Univariate odds ratios and their 95% confidence intervals (95% CI) were estimated for variables found to have a statistically significant (P<0.05) or borderline significant (P<0.2) relationship with moderate or greater post-operative LAVVR. These variables were included in the multivariate analysis, which was completed using logistic regression. A P-value of 0.05 or less was considered significant. All statistical analyses were conducted using the software StatsDirect, version 2.7.2. 2008 (Cheshire, UK). 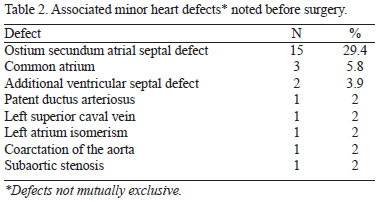 The cleft was completely closed with interrupted 6-0 polypropilene sutures in 49 patients (96.1%). For those 11 patients (21.6%) who presented annular dilation based on the surgeon's judgment, both cleft closure and posterior annuloplasty were used. There were no statistically significant differences in the preoperative grade of LAVVR of these 11 patients when comparing to those who had not undergone annuloplasty (P=0.94).

Among the nine patients in whom abnormalities on the AV valve were diagnosed, the cleft was left untouched in one patient with a dysplastic valve. In one of the cases with an accessory cleft, the attempt of closing it caused worsening of regurgitation, thus this cleft was left intact. Another patient presented a big atrial septal defect and a severe LAVVR; the choice for this case was to close de cleft and to leave a small residual atrial septal defect. Annuloplasty was performed in four out of these nine patients.

The cardiopulmonary bypass time was longer in patients with AV valve malformation: mean=83±24.13 (median 94.5 min) vs. 64.7±20.2 (median 70 min); P=0.03. The postoperative time on a mechanical ventilator ranged from 2.6 to 44.7 hours (mean=9.4±7.1 hours, median=7.2 hours) and the time of inotropic support varied between 10 and 157 hours (mean=49.9±26 hours, median=46 hours). The length of hospital stay ranged from 1 to 22 days (mean=7.9±4.6 days, median=7 days). There were two deaths (3.9%), one within the first 24 hours due to a 3rd degree AV block not properly treated and another due to low cardiac output syndrome on the 2nd postoperative day. The postoperative LAVVR grades on these patients were II and I, respectively, and none of them presented AV valve malformation. Before treatment, both of these patients had a grade I LAVVR.

Postoperative echocardiographic exams were performed between zero and 30 days after surgery (mean=12.6±9.4 days). There were 8 cases with grade I LAVVR (15.7%), 31 with grade II (60.8%), 11 with grade III (21.5%), and 1 with grade IV (2%) (Figure 1). The mechanisms of valve regurgitation were not available on the medical reports. The variance between pre- and postoperative grades of valvar regurgitation was statistically significant (P=0.01). 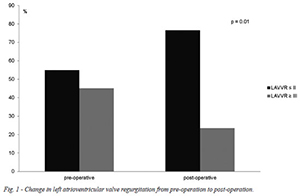 Nine cases (17.6%) of abnormalities on the AV valve morphology were found and they were described according to the surgeon's report: dysplastic valve leaflets (n=5), accessory cleft (n=2), tendinous cordae rupture (n=1), and small left AV valve orifice (n=1). Six of these 9 patients presented with moderate or severe LAVVR before operation (66.7%), a rate greater than that seen in patients without such abnormalities (40.5%) (P=0.27). After repair, 4 of these 9 patients presented the same grade of preoperative LAVVR; there was worsening in 1, and improvement in 4. The variance between pre- and postoperative grades of LAVVR in this group of patients with AV valve malformation did not reach significance (P=0.26), unlike patients without such abnormalities (P=0.016). Among the 19 patients with Down syndrome, 2 (10.5%) presented AV valve abnormalities; whereas among the 32 without Down syndrome, 7 (21.9%) presented it (P=0.7).

In 17 patients, the trivial or mild LAVVR found before operation was maintained after the procedure. In 15 of the 23 (65.2%) patients with moderate or severe pre-operative LAVVR, the postoperative LAVVR was found to be trivial or mild. A one-grade worsening on the LAVVR was found in 8 patients (15.7%). Of the 2 cases in which the cleft was left open, the grade of LAVVR didn't change. Regarding the improvement on the grade of LAVVR, there was no statistical significance comparing those patients who had undergone annuloplasty, with those who had not undergone it (P=0.84).

Univariate analysis revealed that absence of Down syndrome was associated with moderate or severe post-operative LAVVR (P=0.02; OR=9.43). Severe preoperative LAVVR and AV valve abnormalities were only marginally significant (P=0.07 and 0.19, respectively) (Table 3). However, none of the factors were found to be associated with moderate or severe postoperative under multivariate analysis. Absence of Down syndrome reached only a borderline significance (P=0.06; OR=8.4) (Table 4).

Despite different ages, different weight at repair, and different physiology, patients with both complete and incomplete AVSD present a similar risk of reoperation for LAVVR[1,3-6,9-14]. What both variations of the same disease have in common are the typical anatomical landmarks of AVSD (common AV junction, a common 5-leaflet AV valve, distinct papillary muscle displacement and a narrow and elongated left ventricle outflow tract)[15,16], as well as a high prevalence of individuals with Down syndrome[17]. Therefore, the clue to understanding this frequent complication may be related more to these two aspects than to another factor such as age, weight, or AV valve malformation.

In the study by Kanani et al.[18], in which the anatomy of the subvalvar apparatus of normal hearts was compared to those of hearts with complete and incomplete AVSD with an intact left AV valve, the structural and geometric disarray of the tendinous cords of those hearts with AVSD defect was clearly visible, along with its possible rule on the mechanisms of valve regurgitation. Moreover, in the work by Bharucha et al.[19], with the use of three-dimensional echocardiography, it was found that a more acute angle of the components of the common AV valve against the plane of the common AV junction would be a predictor of postoperative valve function.

Performing an intraoperative transesophageal exam is routine in many centers[5,10,20]; though, there is often too much discrepancy between its findings and those obtained through transthoracic exams in the days or weeks after repair[12,21]. In our study, which was performed without the use of intraoperative transesophageal echocardiography, a decrease of the number of patients with moderate or greater LAVVR from 45.1% to 23.5% was similar to that reported by Kaza et al.[22] in a study evaluating data from seven centers in North America. These results show that all techniques that were used, including cleft closure and annuloplasty, had an impact, but not enough of an impact to completely avoid early post-operative LAVVR in some patients. These patients, if previously identified, might receive an alternative approach to minimize the grade of LAVVR.

As for the Down syndrome factor, AVSD is a real model to study the impact of Down syndrome on outcomes, since there are no other situations in congenital heart diseases in which there is such a high prevalence of a chromosomal disorder. Statements such as "In Down patients valve tissue is more abundant and allows for an easier reconstruction"[11] are often seen. It suggests that patients without Down syndrome would have a higher risk of worse surgical outcomes, as found by some authors[6,13]. However, not all studies confirm this relationship. Murashita et al.[4] and Al-Hay et al.[3], for instance, did not find any significant differences between individuals with or without Down syndrome in their studies. In the aforementioned study by Kanani et al.[18], there was no mention if hearts of patients with Down syndrome were included. Perhaps, histopathological comparisons of the valve and subvalvar apparatus of patients with and without Down syndrome might answer this question. In our study, the absence of Down syndrome tended to have some statistical significance.

Some studies found the AV valve malformation to be associated with reoperation or valve replacement[9,14]. In the present study, the results could not prove any relationship between the presence of malformation and moderate or severe postoperative LAVVR. However, it was found that the operation for patients with such abnormalities did not produce the same benefits as it was seen for patients without them. The longer cardiopulmonary bypass time and the impossibility of closing the cleft in two out of nine patients demonstrate how difficult these cases can be. The diagnosis of these valvar abnormalities can be difficult. Ando et al.[21] found a weak correlation between preoperative echocardiographic findings and the surgeon's judgment in regard to the diagnosis of these malformations. Moreover, one should know that little consistency between the findings of two- and three-dimensional Echocardiography, considering the presence of AV valve malformation, has been shown by some authors. In the study by Takahashi et al.[23], for instance, the correlation between the findings of both methods was lower than 46% in the evaluation of the mural leaflet and in the evaluation of the commissural abnormalities of the left AV valve leaflets. The three-dimensional echocardiogram was more accurate and more reliable.

In conclusion, for this sample we were not able to identify any risk factor for early moderate or severe postoperative LAVVR at our center, but we could observe that patients with AV valve abnormalities may be a challenge for surgeons.

It was a retrospective study, and was therefore subject to limitations in terms of how correctly the information in the medical records was filed. The small number of patients may, in some ways, account for the lack of statistical significance among the factors studied. There were no pre- and postoperative echocardiographic information about the mechanisms of valve regurgitation (residual cleft, mobility of the leaflets, etc), precluding its impact on results.