INTRODUCTION: Rheumatic Fever represents a serious public health problem in developing countries, with thousands of new cases each year. It is an autoimmune disease, which occurs in response to infection by streptococcus A.
OBJECTIVE: The aim of this study was to evaluate the immunolabeling and protein expression for endothelin-1 and 3 (ET-1, ET-3) and its receptors (ETA, ETB) in rheumatic mitral valves.
METHODS: Immunohistochemistry was used to identify ET-1/ET-3 and ETA/ETB receptors in rheumatic and control mitral valves. Quantitative analysis of immunostaining for ET-1/ET-3 and ETA/ETB receptors was performed. In addition, western blot analysis was carried out to assess protein levels in tissue samples.
RESULTS: ET-1 and ETA receptor immunostaining predominated in stenotic valves, mainly associated with fibrotic regions, inflammatory areas and neovascularization. Quantitative analysis showed that the average area with positive expression of ET-1 was 18.21±14.96%. For ETA and ETB, the mean expressed areas were respectively 15.06±13.13% and 9.20±11.09%. ET-3 did not have a significant expression. The correlation between the expression of both endothelin receptors were strongly positive (R=0.74, P=0.02), but the correlation between ET-1 and its receptor were negative for both ETA (R=-0.37, P=0.25), and ETB (R=-0.14, P=0.39). This data was supported by western blot analysis.
CONCLUSION: The strong correlation between ET-1 and its receptors suggests that both play a role in the pathophysiology of rheumatic mitral valve stenosis and may potentially act as biomarkers of this disease.

Mitral stenosis is an obstruction to blood inflow between left atrium and left ventricle caused by some structural abnormality of the mitral valve, such as annular calcification and chordal fusion[1,2]. Usually, mitral stenosis is of rheumatic origin (more than 99% of cases). Rheumatic fever (RF) is a recurring, inflammatory and autoimmune disease as a result of complications of infections by Lancefield group A β-hemolytic Streptococcus pyogenes. RF is rare in developed countries but remains a disease with high prevalence in developing countries, and is a major cause of acquired heart diseases in children and young adults, such as mitral or aortic stenosis[3-6]. It is estimated that more than 125000 people are hospitalized per year in Brazil because of acute RF[7].

Endothelins are a family of peptides of which there are 3 isoforms: ET-1, ET-2 and ET-3, acting on 2 receptors: ETA and ETB. ET-1 is the form most produced by cardiac endothelium, being normally detected in low concentration in serum. It is related to the regulation of physiological functions including cardiovascular homeostasis[8]. However, in higher concentrations, it acts as pathogenic mediator causing vasoconstriction, fibrosis, inflammation and vascular hypertrophy[9]. ETA receptors have a greater affinity for ET-1 and are expressed in several cells in the cardiovascular system, including smooth muscle cells and fibroblasts, whereas ETB receptors are mainly expressed on endothelial cells and have the same affinity for all three endothelin isoforms. The main effects of ET-1 on ETA receptors are vasoconstriction, increased inotropism and mitogenesis; ETB receptors are associated with endothelin-induced vasodilation via nitric oxide and prostacyclin release[10].

Some studies show gene expression of endothelin in heart valves of patients who underwent surgical valve replacement[2,5,11,12]. The expression and synthesis of ET-1 is increased by shear and turbulent forces that are likely to occur in various forms of valvular dysfunction that impact on tissue structure and function[5]. This study aims to confirm the presence and determine endothelin and its receptor levels in rheumatic mitral valves, the importance of this peptide and how it might act as a biomarker in inflammatory processes associated with cardiovascular diseases.

This study focused on the quantitative analysis of immunostaining and western blotting of eleven mitral valves collected at Aracaju, SE, Brazil under local Ethics Committee approval (CAAE 2344.0.000.107.10). Additionally, we performed calcium determination on the mitral valves.

Seven mitral valve samples were obtained during heart valve surgeries in association with two major cardiovascular Surgery services located in the city of Aracaju. The control group consists of four samples from victims of fatal motorcycle accidents which were obtained at the local Institute of Legal Medicine. At autopsy, valvular changes were not evidenced; nor other signs that could be suggestive of acute or chronic rheumatic disease.

After gathering the samples, they were submerged in RNA stabilization solution made by BioAgency® and stored in a -80ºC freezer at the Morphology Department of UFS. The samples were prepared as 5 µm sections that were mounted on silanized microscope slides.

All the 7 patients who underwent surgical treatment between the months of June 2012 and August 2012 were male, with documented evidence of rheumatic mitral stenosis, diagnosed by echocardiographic exams associated with serological tests (ASO) and clinical history of rheumatic fever. The mean age of the patients was 33±11.56 years. There were no deaths during surgery. Echocardiographic data from the valve area (VA) and pulmonary artery systolic pressure (PASP) were obtained. The findings showed a mean valve area of 1.0±0.38 cm2 and a mean PASP of 52.71±13.64 mmHg, as shown in Table 1. The mean age of the control group (four males) is 27±1.41 years old and the average mitral valve area measured at autopsy was 4.55±0.36 cm2.

The samples were dewaxed in xylene for 10 minutes, rehydrated in decreasing concentration alcohol (100% to 50%) and immersed in distilled water. Then the slides were heated in full power microwave for 10 minutes in citrate buffer solution pH 6 and washed in phosphate buffered saline (PBS). The histological sections were circled by wax pen to contain incubation solution. Blocking normal horse serum (10 minutes) and primary antibody (30 minutes), both in PBS solution, were added. After that, slides were gently washed in PBS for 3 times. Secondary antibody in PBS solution was added for 10 minutes and then the slides were gently washed for 3 times again. Sections were incubated in Vectastain® ABC-AP reagent for 5 minutes. The sections were washed in PBS 3 times and incubated in alkaline phosphatase substrate solution 20 minutes. The slides were counterstained with haematoxylin, tapwater was rinsed for 5 minutes, washed in distilled water 2 times, then dehydrated in increasing concentration alcohol (50% to 100%) and dewaxed in histoclear for 3 times of 5 minutes each. Vector® red substrate was used as the chromogen of this reaction.

Stained area measurement of each sample was performed using ImageJ software (National Institute of Health, Bethesda, MD, USA). The method of measurement was based on calculating the mean value derived from the red channel of a red-green-blue (RGB) digital microphotograph of the stained sections. Using a color histogram module and the statistics of the red color distribution, the specimens under examination were compared. The higher the mean intensity on a scale of 0 to 255, the more positive the specimen is. Quantification was performed obtaining the mean intensity value of each section stained by immunohistochemistry at 200x magnification, including the samples stained with ASO2/Thy-1 to identify fibroblasts. Thereafter, a ratio between the mean value in each sample for endothelins and the fibroblast was used as a constitutive control. The measurement of stained areas was repeated by a second observer.

To examine biochemical and functional differences between control and ET-1 fibroblasts in mitral valves, we performed some western blot experiments, according previous protocols[14,15]. Fibroblasts were cultured and treated with ET-1 in floating or fixed collagen gels as described above. Alternatively, fibroblasts were grown to confluence in Dulbecco's modified Eagle's medium (DMEM) with 10% fetal calf serum and then serum starved in DMEM with 0.5% bovine serum albumin (BSA) for 24 h. After serum starvation, cells were stimulated with 100 nM ET-1 for 24 h with 0.5% BSA .Cell layer lysates were examined. Sodium dodecyl sulfate-polyacrylamide gel electrophoresis was performed on 12% polyacrylamide gels, and the separated proteins were transferred onto nitrocellulose membranes at 30 V for 90 min. Membranes were blocked by incubation for 1 h with 5% nonfat milk in PBS containing 0.2% Tween 20, and antigens were detected using specific antibodies. Cell layer lysates (10 µg/sample) were probed using antibodies directed against ET-1, ET-3 (R & D Labs) ETA and ETB (Alomone Labs, Israel), followed by incubation with appropriate horseradish peroxidase-conjugated bound secondary antibody (Jackson ImmunoResearch Laboratories).Signal was detected using the enhanced chemiluminescence protocol (Amersham Biosciences, Piscataway, NJ) as described by the manufacturer.

The valve fragments were sent to the Laboratory of Analytical Chemistry, Department of Chemistry (UFS) to determine their inorganic calcium content. We also analyzed the control group. HCl was used to digest the samples, and the quantitative analysis of the inorganic calcium was performed via atomic absorption spectrometer (Varian® Atomic Absorption 240FS, Mulgrave, AUS).

Statistical calculus was performed by measures of central tendency and variation. We also examined the correlation between expression of ET1 and its receptors. For correlation analysis, we used Pearson's correlation, with the significance level of 5% (P value< 0.05). The results obtained was analyzed by the software Microsoft Excel® 2007. 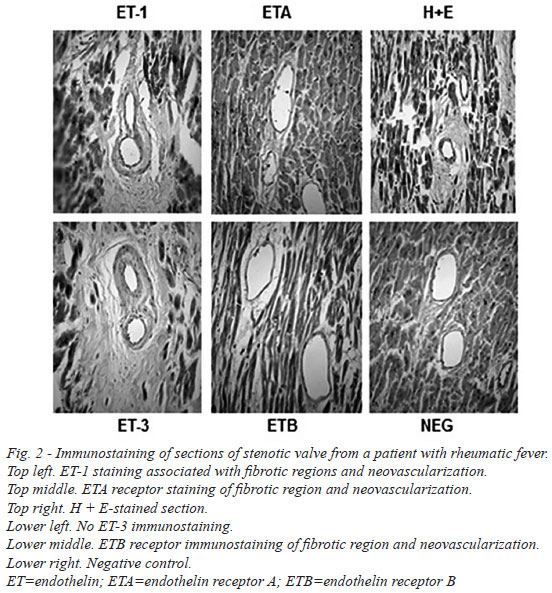 The western blot analysis data generally supported the quantitative immunohistochemistry where ET-1 and ETA receptor protein expression were shown to be raised in RF/stenotic mitral valves compared with controls. ETB receptor protein levels were low and a small rise in stenotic valves was observed while ET-3 expression was low and there was no difference between RF patients and controls (Figure 4). 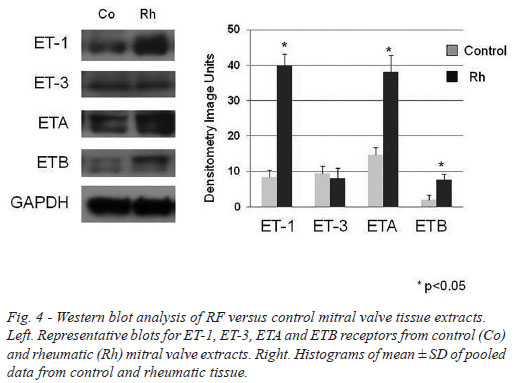 In fact, the group with mitral stenosis showed high levels of inorganic calcium, with an average of twenty-six times higher than the control group (Mitral Stenosis Group=8.1±1.6 vs. Control Group=0.3±0.2; P<0.05).

A study investigating the expression levels of ET-1 and ET(A) and ET(B) receptors in porcine mitral valves and associating transcription levels to age, leaflet location and deposition of mucopolysaccharides (MPS) has been described[19] where transcription levels of ET-1 and ET(A)-R were significantly higher in leaflets from the 'old' compared with 'young' pigs whereas gene expression of ET(B)-R was not associated with age, but increased in chordal insertion areas compared with inter-chordal areas. It was concluded that an age-related valvular degeneration occurs in porcine mitral valve leaflets and that ET-1 is involved via an action on both ET(A) and ET(B) receptors.

Regarding a potential role of ET-1 in calcification, there is evidence that this peptide is involved in vascular calcification based on a study using both an in vivo model and in vitro calcification of vascular smooth muscle cells (VSMCs) induced by beta-glycerophosphate[20]. In vitro, calcium content and Ca(2+) uptake were increased in calcified VSMCs, compared with controls, but were decreased, compared with calcified VSMCs in the presence of BQ123. In addition, ET-1 content in the medium and ET-1 mRNA in VSMCs was elevated compared with normal VSMCs. These results indicated an upregulated ET-1 gene expression as well as an increased production of ET-1 in calcified aorta and VSMCs with BQ123 and bosentan significantly reducing vascular calcification suggesting that ET-1 might be involved in pathogenesis of vascular calcification. Our study revealed marked ET-1 immunostaining of microvessels in rheumatic mitral valves that was paralleled by staining of both ETAR and ETBR, an observation that may be of particular relevance to the calcification occurring in these patients[21,22].

According other studies which found a positive correlation between ET-1 and ETA receptors with mitral stenosis in rheumatic patients, our study showed higher levels of ET-1 in rheumatic replaced valve samples in comparison to control samples. But it should be understood that the results fit to more complex valve situations to the point of not allowing the plastic; with this, we can not assert that the results can be assumed as a general rule during the natural history of mitral stenosis.

SCL: Final approval of the manuscript; conception and design; manuscript writing or critical review of its content

MRD: Analysis and/or interpretation of data; conception and design; operations and/or experiments conduct

NNS: Operations and/or experiments conduct; manuscript writing or critical review of its content

WBS: Analysis and/or interpretation of data; operations and/or experiments conduct; manuscript writing or critical review of its content

TMAR: Analysis and/or interpretation of data; final approval of the manuscript; conception and design; operations and/or experiments conduct; manuscript writing or critical review of its content