Stroke of a cardiac myxoma origin

OBJECTIVE: The clinical features of cardiac myxoma stroke have not been sufficiently described. Debates remain concerning the options and timing of treatment and the clinical outcomes are unknown. This article aims to highlight the pertinent aspects of this rare condition.
METHODS: Data source of the present study came from a comprehensive literature collection of cardiac myxoma stroke in PubMed, Google search engine and Highwire Press for the year range 2000-2014.
RESULTS: Young adults, female predominance, single cerebral vessel (mostly the middle cerebral artery), multiple territory involvements and solitary left atrial myxoma constituted the outstanding characteristics of this patient setting. The most common affected cerebral vessel (the middle cerebral artery) and areas (the basal ganglion, cerebellum and parietal and temporal regions) corresponded well to the common manifestations of this patient setting, such as conscious alteration, ataxia, hemiparesis and hemiplegia, aphasia and dysarthria. Initial computed tomography scan carried a higher false negative rate for the diagnosis of cerebral infarction than magnetic resonance imaging did. A delayed surgical resection of cardiac myxoma was associated with an increased risk of potential consequences in particular otherwise arterial embolism. The mortality rate of this patient population was 15.3%.
CONCLUSION: Cardiac myxoma stroke is rare. Often does it affect young females. For an improved diagnostic accuracy, magnetic resonance imaging of the brain and echocardiography are imperative for young stroke patients in identifying the cerebral infarct and determining the stroke of a cardiac origin. Immediate thrombolytic therapy may completely resolve the cerebral stroke and improve the neurologic function of the patients. An early surgical resection of cardiac myxoma is recommended in patients with not large territory cerebral infarct.

Cardioembolic stroke accounts for 14-30% of ischemic strokes with a predilection of early and later recurrences[1]. Atrial fibrillation, acute myocardial infarction, valvular heart disease, infective endocarditis and cardiac myxoma are major sources of cerebral emboli[2]. Of them, atrial fibrillation is the most important one responsible for 45% of cardiogenic embolism[3]. Cardiac myxoma, the most common primary cardiac tumor, is a rare cause, but an important etiology as well for stroke in the young[4]. However, the diagnosis of a cardiac myxoma is often elusive in young stroke patients[5]. A delayed diagnosis and untimely treatment may mean laissez-faire of progression of stroke and development of certain critical consequences like systemic and peripheral embolic events. The clinical features of stroke of a cardiac myxoma origin have not been sufficiently described. In addition, debates remain concerning the options and timing of treatment and the clinical outcomes are unknown. This article aims to highlight the pertinent aspects of this rare condition.

A comprehensive literature collection of cardiac myxoma stroke was made in PubMed, Google search engine and Highwire Press for the year range 2000-2014. The search terms included "cardiac myxoma", "atrial myxoma", "valvular myxoma" and "stroke". The search ended on June 30, 2014. Articles describing transient ischemic attack, cerebral vascular aneurysm without stroke, or stroke caused by other cardiac tumors than myxomas were excluded from this study. Data were extracted from the text or tables, including details of the study subjects, demographics, cerebral infarct, cardiac myxoma, complications, follow-up length and mortality. The main outcomes were complications and mortality.

Quantitative data were expressed in mean ± standard deviation with range and median values. Comparisons of frequencies were made by Fisher exact test. P-P plot was used to test normal distribution. Logistic regression was taken to assess the possible predisposing risk factors of mortality. P<0.05 was considered statistically significant.

Their initial symptoms were reported in 108 patients: neurological in 97 (89.8%), constitutional in 3 (2.8%), neurological with constitutional 3 (2.8%), neurological with circulatory in 3 (2.8%), circulatory in 1 (0.9%) and all three triad symptoms in 1 (0.9%) patient. Eleven (8.3%) patients had precursory symptoms including headache in 5 (50%), transient ischemic attack in 2 (20%) and a skin rash/spot in 3 (30%) patients. Totally 104 patients developed neurological symptoms. Hemiparesis, aphasia and conscious alteration were the three most common symptoms (Table 1). Forty-two (31.6%) patients had one or more predisposing risk factors of stroke with hypertension being the most common (Table 2). 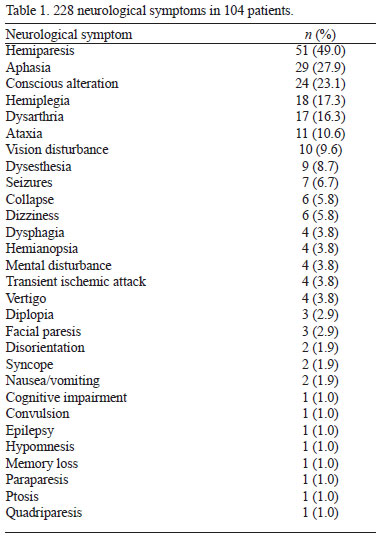 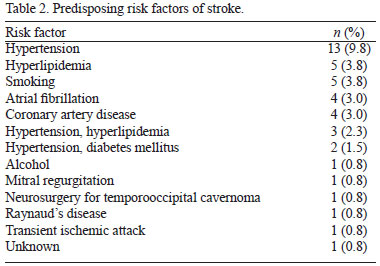 The diagnostic techniques for stroke were given in 81 (60.9%) patients with magnetic resonance imaging (MRI) being the most commonly and computed tomography (CT) more commonly used technique (Table 3). 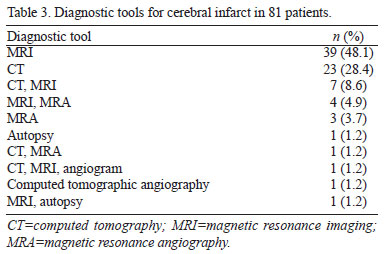 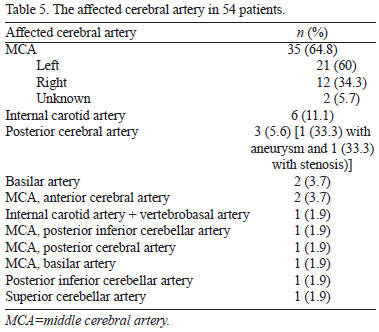 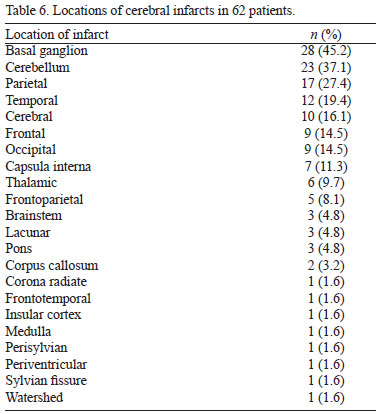 Patients were more with unilateral cerebral infarct than with bilateral (χ2=14.1, P=0.000), and more with multiple infarcts than solitary. No prevalence was noted between left- and right-sided infarcts (Table 7). 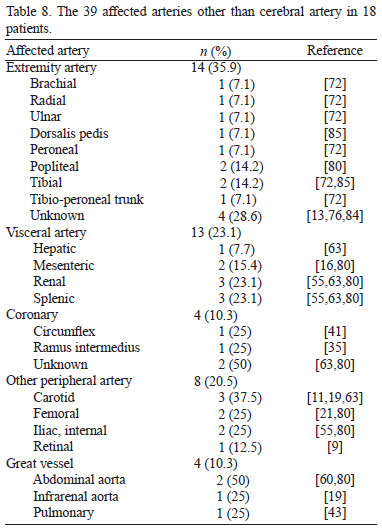 Timing of the diagnosis of cardiac myxoma was described in 33 (24.8%) patients. A patient had been diagnosed with a cardiac myxoma 7 years earlier during which time she declined to all treatments. The remaining 32 (97.0%) patients had their cardiac myxomas diagnosed at a mean of 342.7±744.6 (range, 1-3240; median, 7.5) days after admission.

The diagnostic techniques of cardiac myxoma were described in 114 (85.7%) patients. Transthoracic echocardiography was the most common diagnostic technique, which was used in 90 (78.9%) patients. It was the only diagnostic tool in 79 (87.8%) patients and as an adjunctive to other imaging in 11 (12.2%) patients (Table 9). In one patient, the pathology of the aspirated materials by catheterized thrombectomy on day 5 after admission revealed platelet thrombus and myxomatous tissue, which aroused the suspicion of a cardiac myxoma origin[41]. Both transthoracic and transesophageal echocardiography showed a respective false negative result in one patient each[10,19], the cause of the latter was a complete detachment of the cardiac myxoma[19]. 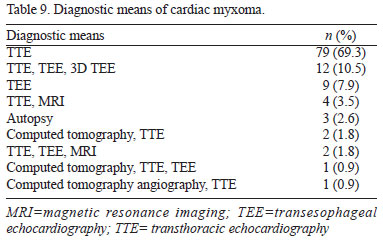 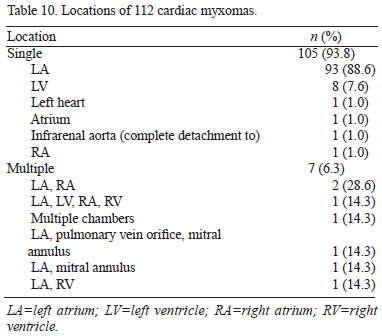 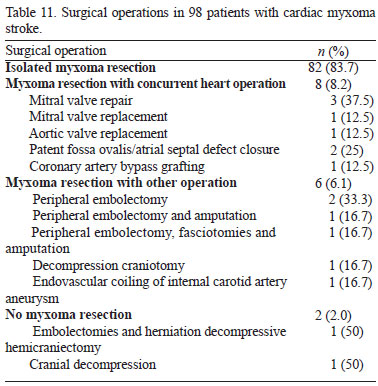 Cardiac myxoma is an important cause of stroke in young patients. Lee et al.[46] reported that the stroke patients aged 48.5 (range, 17-70) years. Ekinci & Donnan's[25] patient series aged between 6 and 82 years. The present study revealed young children at the age of 4 years can be a victim of cardiac myxoma stroke. Aziz et al.[5] reported a female predominance with a female-male ratio of 2:1 in cardiac myxoma, and the present study also revealed a female predominance but with a smaller gender ratio. The classic symptom triad of cardiac myxoma patients includes obstructive, embolic and constitutional manifestations[13]. Cardiac myxoma stroke is often of an acute onset, whereas tumor embolization including myxoma-induced cerebral aneurysm and myxomatous metastasis may show a delayed presentation[46]. However, cardiac myxoma is responsible for only 0.5% of stroke, with females at the age of 50 years at greatest risk[87]. Embolic manifestations occur in 20-45% of patients with a cardiac myxoma, sometimes as the onset symptom[75], as a result of cerebral ischemia and less commonly hemorrhage[18]. In a series of 113 atrial myxoma patients with neurologic presentations, 83% presented with ischemic stroke, most often at multiple sites (41%). Other manifestations included syncope (28%), psychiatric symptoms (23%), headache (15%) and seizures (12%)[72]. Alvarez-Sabín et al.[13] reported 11 of 28 (39.3%) cardiac myxoma patients had embolic phenomena, which affected the cerebral arteries in 6 (54.5%), peripheral arteries in 2 (18.2%) and both cerebral and peripheral arteries in 3 (27.3%) patients. Lee et al.[45] reported 13 of 59 (22.0%) patients with a cardiac myxoma developed embolic events, 11 (18.6%) of which were in the brain, 2 (3.4%) in the limb and 1 (1.7%) in the eye. Furthermore, Yuan[85] reported a patient with a delayed cardiac myxoma resection developed multiple embolic events in the lower extremities. Bajraktari et al.[16] reported one cardiac myxoma patient who declined to all treatments for 7 years eventually developed mesenteric embolism.

The size of the atrial myxoma was variable with a mean of 2.7 (range, 0.4-6.5) cm as reported by Lee et al.[46], and was 4.8±1.9 cm by Lee et al.[45]. Cardiac myxoma was classified into two types according to their gross appearances: type 1, with an irregular or a villous surface and a soft consistency; and type 2, with a smooth surface and a compact consistency[45]. Porapakkham et al.[88] reported that cardiac myxomas with an irregular surface exceeded those with a smooth surface in number (62.2% vs. 37.8%). Embolic potential usually depends on the mobility other than on the size of the myxoma[46]. Neurologic complications of atrial myxoma are most frequently cerebral infarcts caused by detached thrombus from the myxoma; while rarely by tumor fragments[46].

Active illness is often accompanied by elevation of erythrocyte sedimentation rate and C-reactive protein, hyperglobulinemia and anemia. Constitutional symptoms may be mediated by interleukin-6 produced by the myxoma itself[89]. MRI is more sensitive than CT in identifying subtle abnormalities of the brain[49]. Transthoracic and/or transesophageal echocardiography can be options for the screening of stroke of a cardiac source[31].

The timing of treatment in such patient is always a matter of intense debate. Soleimanpour et al.[74] proposed that the patients with a delayed presentation of more than 3-4.5 hours were not indicated for intravenous thrombolysis. Al-Said et al.[11] disagreed the use of recombinant tissue plasminogen activator for intravenous thrombolysis due to probable myxoma source infarct. Vogel et al.[80] suggested a 4-week delay of surgical resection of cardiac myxoma concerning the risk of intracerebral hemorrhage following cerebral infarction. Da Silva & de Freitas[21] advocated a delayed surgery after a large stroke. However, Sethi[90] carried out emergent peripheral vascular and cardiac surgeries in a patient with an acute large infarct of a cardiac myxoma origin and the patient did well.

Young adults, female predominance, single cerebral vessel (mostly the middle cerebral artery) and multiple territory involvements and solitary left atrial myxoma epitomize the outstanding characteristics of the patients with cardiac myxoma stroke. The most common affected cerebral vessel (the middle cerebral artery) and areas (the basal ganglion, cerebellum and parietal and temporal regions) correspond well to the common manifestations of conscious alteration, ataxia, hemiparesis and hemiplegia, aphasia and dysarthria. Initial CT scan carries a higher false negative rate in diagnosing cerebral infarction, and thus MRI should take the place of it, especially in patients with an immediate presentation. Echocardiography is a reliable means for determining the cardiogenic origin of stroke.

Limited patient information concerning the timing of onset, presentation and treatment as well as survival constitutes the main drawbacks of the present study. Multicenter prospective studies on this particular patient population are anticipated in the future.

Cardiac myxoma stroke is rare. Often does it affect young females. For an improved diagnostic accuracy, MRI and echocardiography are recommended for young stroke patients. Immediate thrombolytic therapy may completely resolve the cerebral stroke and improve the neurologic function of the patients. An early surgical resection of cardiac myxoma is recommended in patients with not large territory cerebral infarct so as to prevent from the potential consequences.

21. Silva IR, de Freitas GR. Is it safe to proceed with thrombolytic therapy for acute ischemic stroke in a patient with cardiac myxoma? Case report and review of the literature. Eur Neurol. 2012;68(3):185-6. [MedLine]

39. Khoynezhad A, Graver LM. Myxoma of the anterior leaflet of the mitral valve presenting with stroke in a young male. Eur J Cardiothorac Surg. 2004;26(5):1040. [MedLine]

90. Sethi NK. Is it safe to proceed with thrombolytic therapy for acute ischemic stroke in a patient with cardiac myxoma? Eur Neurol. 2013;69(2):67. [MedLine]

GH: Final approval of the manuscript