OBJECTIVE: It was supposed that troponins in cardiac myxoma patients might be in a same fashion as in the conditions without myocardial injury. In order to verify this hypothesis, troponins in cardiac myxoma patients were discussed by presenting a comprehensive retrieval of the literature with incorporating the information of a recent patient.
METHODS: Postoperative detections of troponin I, creatine kinase isoenzyme MB (CK-MB) and N-terminal pro-B-type natriuretic peptide revealed elevated troponin I and CK-MB and normal N-terminal pro-B-type natriuretic peptide. Postoperative troponin I and CK-MB shared a same trend, reaching a peak value at postoperative hour 2, gradually decreased on postoperative day 1, and reached a plateau on postoperative days 7 and 13. A significant correlation could be noted between the postoperative values of the two indicators (Y=0.0714X + 0.6425, r2=0.9111, r=0.9545, P=0.0116). No significant linear correlation between troponin I and N-terminal pro-B-type natriuretic peptide were found. Literature review of troponins in cardiac myxoma patients revealed the uncomplicated patients had a normal or only slightly elevated troponin before open heart surgery. However, the complicated patients (with cerebral or cardiac events) showed a normal preoperative troponin in 3 (23.1%) and an elevated troponin in 10 (76.9%) patients (χ2=7.54, P=0.0169, Fisher's exact test). The overall quantitative result of troponin I was 2.45±2.53 µg/L, and that of troponin T was 3.10±4.29 mg/L, respectively.
CONCLUSION: Troponins are not necessarily elevated in patients with a cardiac myxoma without coronary syndrome. By contrast, patients with a cardiac myxoma with an elevated troponin may herald the presence of an associated coronary event. An old cerebral infarct does not necessarily cause an elevation of troponin or B-type natriuretic peptide, or new neurological events, but might lead to a delayed awakening.

Troponins are a type of contractile protein produced in cardiac and skeletal muscles. They are composed of troponin subunits I, C and T, with the former two subunits being highly sensitive and specific for myocardial damage, especially implicated in the diagnosis of acute coronary syndrome[1]. Dynamics of troponins have been sufficiently described as to start to increase a few hours after myocardial ischemic damage, reach a plateau after 10-15 hours, and recover gradually to the baseline level[2]. Elevations of troponins T and I were also found in patients without myocardial injury. These situations included severe renal dysfunction[3], acute neurological events (with a peak troponin I value of 3.43±3.22 µg/L)[4], hepatic cirrhosis and portal hypertension[5], stroke, pulmonary embolism and sepsis[6].

Troponins were sporadically reported in cardiac myxoma patients. However, these results were actually anecdotal without being taken into a through investigation. It was supposed that troponins in cardiac myxoma patients might be in a same fashion as in the conditions without myocardial injury. In order to verify this hypothesis, a patient with cardiac myxoma, whose clinical and histopathological aspects have been reported elsewhere[7,8], is to be presented in terms of her serum troponin studies along with creatine kinase isoenzyme MB (CK-MB) and N-terminal pro-B-type natriuretic peptide (NT-proBNP) by incorporating the results based on a comprehensive retrieval of the literature.

Six months prior to current admission, a 51-year-old female had abrupt loss of vision and consciousness. She was in a state of cardiogenic shock, which was revealed to be a result of multiple cerebral infarcts with a diagnosis of "top of the basilar" syndrome due to a left atrial myxoma. Later, she also developed multiple segmental embolism of her lower extremities involving the bilateral anterior tibial, bilateral posterior tibial, right popliteal and bilateral dorsal arteries. Left atrial myxoma resection was performed under cardiopulmonary bypass. During the operation, the myxoma was found to be originated from the free wall of the left atrium. The myxoma was resected en bloc, and the iatrogenic atrial free wall defect was repaired with an autologous pericardial patch. She had a delayed awakening until postoperative hour (POH) 13.5 without any new neurological sequelea. She had an uneventful postoperative course and was discharged home on postoperative day (POD) 19. Histopathology of the resected myxoma showed a glandular cardiac myxoma. 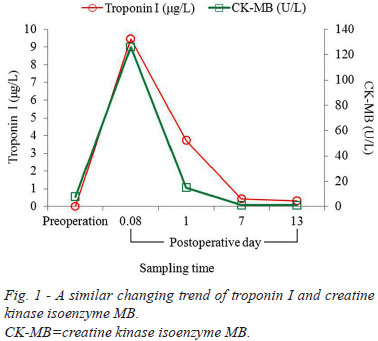 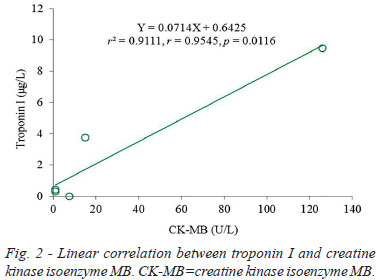 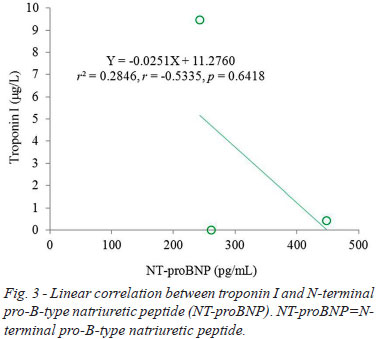 Troponin I is a popularly recognized sensitive biomarker in the diagnosis of postoperative myocardial damage and perioperative myocardial infarction[9]. Clinical observations revealed that troponin I, CK and CK-MB values peaked between POHs 6 and 18, troponin T between POHs 18 and 42, and myoglobin at the surgical closure. The values of all markers were higher in patients undergoing coronary surgery compared to those undergoing valve surgery[10]. Yuan et al.[11] discovered significant elevated serum troponin I during the early days after the onset or surgical repair of myocardial rupture, and they advocated the troponin I was valuable in judging the prognosis of the patients with myocardial injury. Troponin I (as well as NT-BNP) can be helpful in the evaluation of the functions of the vital organs including heart subjected to perioperative drug use, such as oral prophylactic metoprolol[12] and high-dose aprotinin[13]. 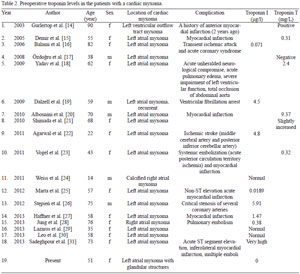 It was proposed that troponin I levels measured on POD 1 may predict short-, medium- and long-term mortality. Troponin I levels of alive patients was 2.01 (range, 1.01-3.65) and 4.26 (range, 2.18-8.37) µg/L at POH 2 and on POD 1, while those of the deceased were 3.63 (range, 1.62-8.26) and 11.85 (range, 5.59-23.96) µg/L, respectively[14]. In a patient with a cardiac myxoma and associated coronary artery stenosis, his troponin I was 3.56 µg/L on POD 13[26]. The present patient with old cerebral infarct had an uneventful recovery after the resection of cardiac myxoma. She had compatible troponin I values during the early postoperative period to the maximal value of the survived surgical patients as reported by Croal et al.[32]. In addition, this patient had significantly decreased troponin I values on PODs 7 and 13, much lower than those of the patient reported by Stępień's et al.[26]. This could be interpreted by the associated coronary artery disease in the latter patient[26].

Comparative studies between troponins and CK-MB have already been stated some decades ago. There were little differences among troponins I and T, and CK-MB after cardiac operation to diagnose myocardial damage[33]. However, troponins have a more prolonged release than CK-MB when the patient is subjected to myocardial damage; it is therefore more sensitive than CK-MB in indicating myocardial necrosis. A troponin I concentration <15 µg/L within PODs 1-2 was highly suggestive of the absence of perioperative myocardial necrosis[34]. The dynamic changes of troponin I and CK-MB in the present patient were quite identical. The incidental finding was a peak value at POH 2 and a gradual decrease on POD 1, contrary to a delayed peak appearing on POD 1 as reported by Croal et al.[32]. The disconformity warranted further investigations.

NT-proBNP is a pre-propetptide synthetized in the cardiomyocytes. When it is secreted, it splits into two parts: physiologically active brain natriuretic peptide (BNP) and biologically inactive NT-proBNP. Both can be significantly elevated when the patient is with an acute or congestive heart failure[35]. The normal range of BNP was <200 pg/mL[36]. Increased BNP values were discovered to be related to acute cerebrovascular events[37]. BNP >140 pg/mL could be helpful in distinguishing cardiogenic from non-cardiogenic embolism[38]. Clinical observations revealed BNP levels were loosely correlated with New York Heart Association (NYHA) functional class[36]. In the patients undergoing cardiac surgery including one patient with atrial myxoma, BNP was 62.8±68.1 pg/mL[39]. Patients with congestive heart failure had a mean BNP concentration of 1076±138 pg/mL, while the non-congestive heart failure patients had a mean BNP concentration of 38±4 pg/mL[40]. Links between BNP and cardiac myxoma have rarely been discussed. Factors associated with high BNP levels other than congestive heart failure were age, gender, renal failure, lung disease and myocardial infarction; meanwhile, atrial myxoma was determined as a factor accounting for low BNP levels with congestive heart failure[41]. Plasma BNP level in 17 consecutive adult patients (including one patient with a left atrial myxoma) during the perioperative period were detected. Plasma BNP remained unchanged until 12, 24 and 48 hours after the termination of cardiopulmonary bypass, which were 149.5±43.0 pg/mL, 175.2±93.6 pg/mL and 146.2±59.4 pg/mL, respectively[42]. In a patient with right heart enlargement and severe pulmonary hypertension free of congestive heart failure, her BNP was 5,613.4 pg/mL[30]. A 53-year-old man with a large left atrial myxoma presented with biventricular heart failure. His BNP was as high as 4,800 pg/mL[43]. Lack of elevations of BNP has been reported in the event of acute congestive heart failure or with ventricular inflow obstruction (hypertrophic obstructive cardiomyopathy, mitral stenosis, or atrial myxoma)[36].

Top of the basilar artery refers to a 2-cm territory surrounding the five-forked junction at the top of the basilar artery formed by 2 posterior cerebral arteries, 2 superior cerebellar arteries and the top of basilar artery[44]. Cerebral infarction involving the rostral brainstem and cerebral hemisphere that are supplied by the distal basilar artery causes a clinical syndrome, known as rostral brainstem infarction or "top of the basilar" syndrome, characterized by visual, oculomotor, and behavioral abnormalities, often with insignificant motor dysfunction[45]. "Top of the basilar" syndrome occurs when the top of the basilar artery is subjected to thromboembolic occlusions, and results in bilateral thalamic ischemia due to occlusion of perforator vessels. Transient ischemic attack and stroke can present in 80% of patients with a cardiac myxoma[46]. Unexplained transient ischemic attack, cerebral infarction and syncope are common neurologic manifestations[47]. Clinical observations demonstrated that the patients with preoperative cerebral infarct took longer time to awaken than those without (6.5±5.0 hours vs. 4.6±2.9 hours, P<0.05)[48]. The incidence of confusion and cerebral infarction after operation in the preoperative infarct patients was higher than those without[48]. The anesthetic awareness in the present patient was 13.5 hours, even longer than reported. This phenomenon implicated that an old cerebral infarct may interfere anesthetic awareness, but not necessarily complicated with new postoperative sequelae. The normal postoperative BNP values of the present patient offered a strong support to this argument.

Troponins are not necessarily elevated in patients with a cardiac myxoma without coronary syndrome. By contrast, cardiac myxoma patients with an elevated troponin may herald the presence of an associated coronary event. An old cerebral infarct does not necessarily cause an elevation of troponin or BNP, or new neurological events, but might lead to a delayed awakening.