Geraldo Verginelli, the search for elegance and perfectionism in cardiovascular surgery

Geraldo Verginelli, the son of Angelo Verginelli and Marianna Marchetti Verginelli, was born on May 8, 1920, in the city of Campinas, located in the countryside of the state of São Paulo.

From 1929 to 1931, he went to elementary school at Grupo Escolar Modelo and, from 1933 to 1937, he attended the prestigious "Culto à Ciência" school, where he graduated from junior high school, both schools being in Campinas. After graduation, he moved to São Paulo, where he took the Pre-Med course at Colégio Universitário, an annex of the University of São Paulo Medical School (FMUSP), during the years of 1938 and 1939. In 1940, after passing the required test for admission, he enrolled in the University of São Paulo Medical School. As both a curricular and a volunteering activity, he attended Second Surgical Rotation under Prof. Alípio Corrêa Neto at Santa Casa de Misericórdia de São Paulo, which was the teaching hospital of the Medical School at the time.

After graduating in 1945 (Figure 1), Verginelli started his three-year surgical training, equivalent to the current medical residency, at the Clínicas Hospital of the University of São Paulo Medical School. In the first year, the rotation covered several specialties, and, in the second and third years, his rotation was under the service of Prof. Alípio Corrêa Neto. The Professor was a pioneer in the First Surgical Rotation and he divided the group into different specialties: Gastrointestinal Surgery, Thoracic Surgery, Endocrine Surgery, and Peripheral Vascular Surgery. Next, Verginelli acted as an intern and Assistant Physician. However, the specialized groups saw General Surgery patients. At last, he joined the Thoracic Surgery Group as an Assistant Physician. Thoracic surgery practice had been going through great advances, especially after the trip of Prof. Zerbini, the group's chief, to Saint Louis and Boston, when surgery for tuberculosis was integrated into the lung resection surgery. Likewise, when the decision to start performing cardiac surgeries under cardiopulmonary bypass was made, the Artificial Lung-heart workshop station was set up in the basement of the Clínicas Hospital in order to produce the equipment that made the surgery possible. The equipment was tested in a series of more than a hundred dogs. In 1957, Verginelli was one of the most active members of that experimental group. In the following year, the first surgery under cardiopulmonary bypass was performed in the Clínicas Hospital. The development of this specialty, with congenital heart disease and heart valve surgeries, was fast-paced, from valve replacement in the 1960s to coronary artery bypass grafting in the 1970s. Throughout those decades, Verginelli continued working almost full-time, becoming an important asset in the workings of the service. His reputation as a skilled, elegant, and perfectionist surgeon was established in the Clínicas Hospital. Therefore, on January 26, 1965, when the first kidney transplant was performed by Prof. Geraldo Campos Freire, Verginelli was called to take care of the vascular anatomy. He remained with this transplant team for many years. 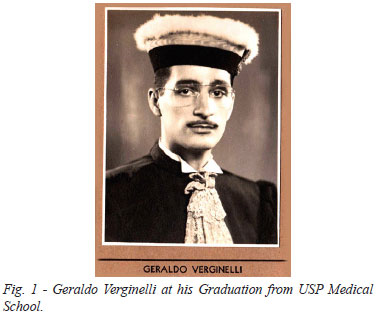 In addition, he participated in the first heart transplant on May 26, 1968 as well as in the following two transplants performed in 1968 and 1969. Similarly, he took part in the development of the dura mater bioprosthesis, where his contribution, in addition to his performance in the congenital heart disease surgery service, was crucial.

He was the point of contact for younger assistants, residents, and interns. Hundreds of them, from all over Brazil, Latin America (Argentina, Ecuador, Mexico, Peru, Uruguay, and Venezuela), Portugal, Spain, and even Japan, owe much of their training to Geraldo Verginelli. He followed a routine, arriving at the Clínicas Hospital, then going to the Heart Institute (Incor) to do postoperative rounds at 7:00 am sharp.

Afterwards, he participated in the meeting to discuss the daily surgical cases at Incor, where his presence was always a certainty, even when he started having health problems and using a wheelchair.

When interacting with Prof. Verginelli, two other remarkable characteristics stood out: his search for propriety in the use of language and his knowledge of the "Nomina Anatomica". Regarding the former, unquestionably a legacy from Prof. Alípio Corrêa Neto, whether at formal or informal meetings, he was known for correcting inaccurate terms, such as pathology, synonyms of diseases as well as any language in disagreement with writing and style manuals. He was frequently asked to correct texts, articles, and even dissertations. As for the Nomina Anatomica, he would not compromise, not even when the term commonly used in medical language was not in accordance with the Nomina.

Regarding academics, most of his titles and positions were obtained through civil service examinations:

• In 1972, Medical Doctor from the University of São Paulo Medical School;

• In 1973, Full Professor of Surgical Rotation at the University of São Paulo Medical School;

• In 1974, Full Professor of Thoracic Surgery at the Paulista Medical School;

• In 1978, Assistant Professor of Thoracic Surgery at the University of São Paulo Medical School.

Those were his titles and positions. The University of São Paulo later extinguished the titles of Full Professor and Assistant Professor, which were then classified as Associate Professor. Verginelli retired as such compulsorily in 1990 at the age of 70. However, he continued to work at Incor (Figures 2, 3, and 4). 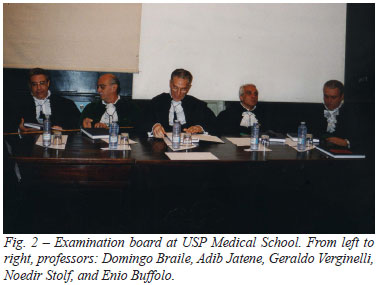 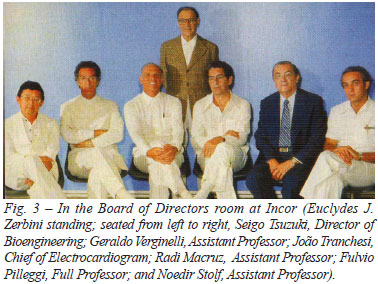 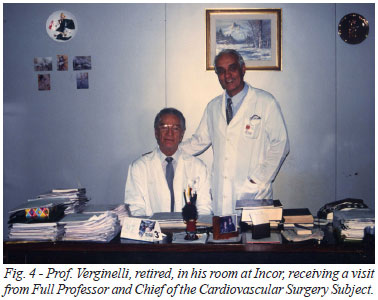 Prof. Verginelli was incredibly active on the scientific level. He coordinated and/or was an exhibitor in more than a hundred national and international conferences in addition to presenting more than 700 communications. He had an extensive list of publications. Besides two dissertations, he published more than 40 book chapters, almost 200 articles in Brazilian journals and about 50 articles in international journals.

He received approximately 40 national and international awards and honors.

Due to his almost exclusive dedication to the Thoracic Surgery Service, the Thoracic Surgery subject, the Clínicas Hospital as well as the Heart Institute, Verginelli was nominated to highly important administrative positions. At the Heart Institute, he was President of the Teaching Committee, member of the Scientific Committee, member of the Board of Directors, member of the Curators Committee of the Zerbini Foundation, and Director of the Surgery Department. The department was established in 1979, encompassing the Surgical, Bioengineering, and Experimental Surgery divisions as well as the Anesthesia Service. Subsequently, those became independent areas and the Surgery Department ceased to be a part of the Heart Institute.

Unlike many, Prof. Verginelli was able to successfully accomplish the triple mission of assisting patients, teaching, and conducting research. While assisting patients, he was crucial to the development of cardiovascular surgery in the Clínicas Hospital of the University of São Paulo Medical School, working and assisting in all areas and specialties. In addition, he participated in the development of innovations in this and other several areas. In terms of teaching, a huge number of cardiovascular surgeons in Brazil and abroad owe much of their training to Prof. Verginelli.

After undergoing an only partially successful hip surgery and suffering from a progressive neurological disease, Prof. Verginelli passed away on July 10, 2014.

Prof. Verginelli fits the description of those that passed us by, left a lot of themselves and took a lot from us.