OBJECTIVE: This study aims evaluate the treatment of congenital heart disease conducted from 2000 to 2009.
METHODS: The sample consisted of all patients undergoing surgical correction for congenital heart disease for ten years in Sergipe, Brazil. The patients were operated in three hospitals located in the city of Aracaju, capital of the state of Sergipe (Brazil). The study was divided into two periods defined by the start date of centralization of surgery. The variables collected were: age, sex, postoperative diagnosis, destination, type of surgery and hospital where the procedure was performed and the classification RACHS -1.
RESULTS: In the period I, the estimate deficit of surgery was 69% decrease occurring in the period II to 55.3%. The postoperative diagnosis was more frequent closure of the interventricular communication (20.5%), closure of patent ductus arteriosus (20.2%) and atrial septal defect (19%). There was a statistically significant correlation between the expected mortality RACHS-1 and observed in the sample. The evaluation of RACHS-1 as a predictor of hospital mortality by ROC curve showed area of 0.860 95% CI 0.818 to 0.902 with P <0.0001.
CONCLUSION: The results of this study indicate that the centralization and organization of existing resources are needed to improve the performance of surgical correction of congenital heart diseases.

The many advances made in cardiac surgery in the world last year [1] are often not accessible to people in developing countries [2].

Recently, in several developing countries, strategies were proposed for correction of congenital heart diseases, such as transfer of patients to developed countries, arrangement of cardiac surgeons' trips to these countries or the creation of a local cardiovascular surgery program [3-6].

Brazil has several developments within cardiac surgery [7], but when comparing to other countries, shows a deficit of surgery for correction of congenital heart disease estimated at around 65%, depending on the region, with the northern region (93.5%) and Northeast (77.4%) with the major deficits [8-10].

In Sergipe, since 2007, through an agreement with the Health System all surgical correction of congenital heart disease are performed in an institution, which previously was distributed in three services. The aim of this study is to assess the treatment of congenital heart disease performed from 2000 to 2009, comparing the periods before and after the surgeries centralization.

The patients underwent surgery in three hospitals located in the city of Aracaju, capital of Sergipe State, being designated hospital 1, 2 and 3, for ethical reasons. Data from these patients were collected from the records of cardiopulmonary bypass (CPB), of compulsory filling, stored in single file, pertaining to all departments of cardiovascular surgery of Sergipe. The study was divided into two periods defined by the starting date of the agreement between SUS (Unified Health System-UHS) and the hospital 3, the period called I runs from January 1st, 2000 to December 31, 2006 and the period II from January 1st, 2007 to December 31th, 2009. The hospital is a charity institution that serves mostly UHS patients. The hospital 2, private, serves mostly patients from health plans and private, having an agreement with the UHS to perform heart surgery. Due to difficulties encountered in these hospitals for surgeries in pediatric patients, an agreement between UHS and the Hospital 3 was signed centralizing all procedures in the pediatric population in this service.

The data collection of surgical correction was performed from July to December 2010. The variables collected were: age, gender, postoperative diagnosis, destination (discharge or death), type of surgery and hospital where the procedure was performed.

The age range was established in the neonatal period (1-28 days old), 1st year of life (29 days to <1 year), children (from 1 year to 12 years) and adolescents and adults (over 12 years). We adopted the definition of the Brazilian Statute for Children and Adolescents establishing pediatric patients up to 12 years. For analysis of hospital mortality, child age was grouped with the adult, for statistical reasons, because there were no deaths in the latter.

For death, we considered those occurring during the hospitalization and so-called hospital mortality.

Were requested from the Health Secretary of Sergipe official birth certificate from 2000 to 2009.

Categorical variables were described as single frequency (count) and percentages and their 95% CI (confidence interval for an estimated 95%) when appropriate.

To assess the association between categorical variables we used the chi-square test. The analysis of expected mortality and by RACHS -1 and that observed in the sample were performed by Pearson correlation. For assessment of hospital mortality and RACHS-1 was constructed ROC curves and estimated the area under it.

We considered the significance level as P <0.05, power 0.80 and the tests as two-tailed.

The statistical software used was SPSS version 17 for testing.

This study was submitted to the Ethics in Research Involving Human Committee at the Federal University of Sergipe and approved in May 2010.

In terms of age we observed a higher frequency of surgery in the age group 1-12 years, followed by over 12 years, with the smallest percentage in the neonatal period. Comparing the periods of the study, 15.5% of patients younger than one year underwent surgery in the period I and 20.3% in period II (Table 2). 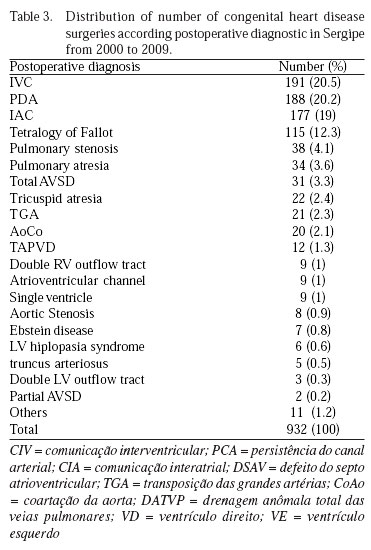 In the classification of surgical risk for congenital heart defects by RACHS-1 there it was more common in categories 1 and 2, not occurring in category 5 in the ten years of follow-up (Table 4).

Regarding the RACHS-1 risk classification the higher frequency of hospital mortality occurred in higher risk categories (4/6), however, with statistically significant difference between the periods, with reduced mortality in the period II, P <0, 0001 (Fig. 1). 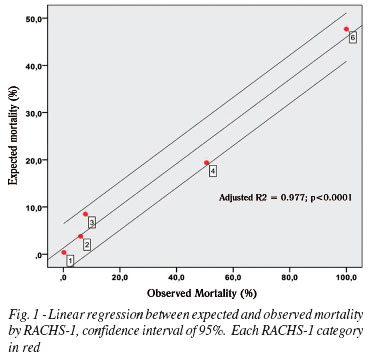 There was a statistically significant correlation (adjusted R2 = 0.977 and P< 0.0001) between expected mortality by RACHS-1 and observed in the sample. 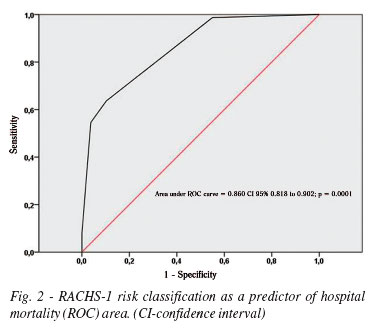 In the present study data, the number of surgeries over the years shows the increasing trend year by year from 2000 to 2003. Between 2004 to 2006 there was a decrease with increasing number of surgeries after 2007. This represents, numerically, the crisis experienced by the pediatric cardiac surgery between 2004 and 2006 which led to the centralization of infrastructure and human resources in the hospital 3, making productivity returned in 2003, Table 1.

There was reduction in surgery deficit to 56% in period II, a value close to the estimated deficit in the Southeast region, site of the largest number of surgeries and centers for cardiovascular care [10].

Most surgeries occurred between age 1-12 years in two periods, being always the neonatal age group with the lowest ratio, followed by the age of 29 days to one year, according Table 2. This data serves as another indicator of deficit, because half of the repairs should have been performed up to the 1st year of life [13]. With the centralization of activities in the hospital 3, this increased proportion of children who underwent surgery before 1 year of 15.5% to 20.3% after the agreement, however, not statistically significant, probably due to sample size (Table 2).

As described in the literature, 20% of patients undergoing repair of congenital heart disease were in the adult age group (table 2), a fact that did not change between periods (Table 4). This finding reinforces the deficit of surgical correction, since no patient had to postpone the procedure to adulthood, when some changes are already irreversible [12].

In period II a partnership with the Service of Mobile Emergency Care was organized, responsible for transport between units and hospitals for the early return of newborns to neonatal intensive care, generating turnover of intensive care beds and, consequently, increasing the number of surgeries.

The pulmonary stenosis with 4.1% and transposition with 2.3% of cases were below the reported in the literature [18]. However, as the study approached surgical repairs and it is very serious diseases, probably the difference is the number of patients who progressed to death before surgical opportunity.

The agreement between UHS and Hospital 3, which divides the study periods, promoted the centralization of the flow of patients with congenital heart disease in the pediatric population for this institution. The number of surgeries performed in the period I was of low productivity, because it was divided between the Hospital 1, which received more complex patients, and Hospital 2, which admitted patients with better prognosis. In period II, the surgeries of patients under 12 years were performed at Hospital 3, and the number of procedures already ranks as of average productivity.

With increase in the number of surgeries per year the support team becomes well prepared, which for major surgery and the need for adequate infrastructure is of great importance, impacting the outcomes. Grouped by RACHS-1 risk classification between the periods, it is clear the reduction in mortality, especially among the categories 2, 3 and 4, lower risk class, Table 5.

Therefore, the centralization of material and human resources had as benefit the increasing number of surgeries, as well as the surgical outcomes with reduced hospital mortality rates, even when assessing the severity of cases.

In linear regression between the RACHS-1 risk classification and hospital mortality it is clearly demonstrated that there are statistically significant correlation and that is a valid instrument for use in our country [9].

The outcomes of this study indicate that the centralization of both human resources and infrastructure are important for surgery of congenital heart disease, and the organization of existing resources is necessary to improve the performance of the service.

We thank all congenital heart surgery team, the pediatric cardiologists, postoperative intensivists in Sergipe in the determination and tenacity facing clinical and socio-economics challenges of our time.