A 53-year-old Caucasian male patient from Olímpia, São Paulo, with arterial hypertension for 16 years without treatment. He was admitted to the emergency room in October 2006 with sudden, high-intensity chest pain for about 3 hours that had spread to the abdomen and left inferior limb, with hyperhidrosis, palpitations and severe blood pressure elevation. The patient was an alcoholic - 1 bottle of beer per day for 20 years. He denied smoking, diabetes, dyslipidemia and any other previous cardiovascular events.

The patient was in good general condition, hydrated, ruddy, cyanotic (2+/4+), eupneic, afebrile, in and out of consciousness. Respiratory auscultation was normal. Cardiac auscultation was rhythmic and normal and without the presence of murmurs. Arterial blood pressure (ABP) was 170 x 110mmHg and heart rate was 86 bpm. The left inferior limb was cyanotic and with a slight loss of sensation. Pulses were not palpable in the femoral and dorsal artery of the left foot. 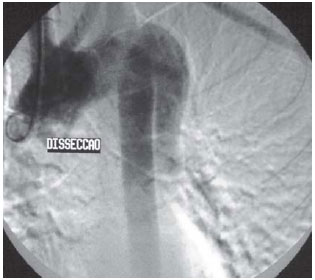 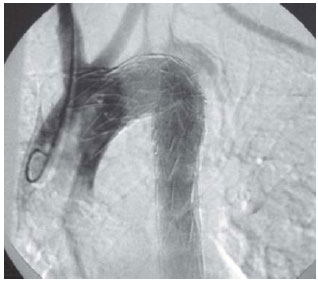 One month after implantation of aortic stent, the patient returned to the clinic complaining of claudication in left inferior limb during great efforts and numbness/burning in left foot. Cilostasol (100mg 2x/day) and Amitriptyline (25mg/day) were prescribed. Afterwards, clinical follow-up for hypertension began, and the patient received guidance about physical activity and a low-sodium and low-calorie diet. He evolved with appropriate blood pressure control.

Acute aortic dissection (AAD) - secondary to hypertension - was reported as hypertensive emergency, characterized by sudden separation of the median layer of the vessel, causing infiltration of a column of blood in a virtual space formed between the intima and adventitia, creating a false lumen and causing hematoma formation [1].

AAD results in high mortality rates and may reach levels from 21.4% before admission to 75.0% in the first 48 hours [1]. About 70% of the cases are positioned in the ascending aorta, while 20% are in the descending and 10% are in the transverse aorta [1]. This manifestation affects men more often than it affects women, at a ratio that is estimated to be between 2:1 and 5:1. [2]. The peak incidence is between 50 and 55 years for proximal dissection, and 60 to 70 years for distal dissection [2].

Most patients with severe AAD present severe migratory pain - often with sudden outset - described as a "ripping" or "stitching" sensation. The original location of pain suggests the original location of the dissection. It is usually followed by symptoms of sympathetic activity, which may also present dyspnea and pulmonary edema. In proximal dissections, the pain begins in the precordium, spreads to the neck, arms, and jaw before spreading to the back, lumbar region or lower limbs, and it is an important differential diagnosis of acute myocardial infarction [3,4].

The diagnosis of AAD is based on clinical history, with a subsequent need for confirmation and classification of proximal or distal. It needs to be fast and efficient, with non-invasive methods as the best choice. The more accurate complementary exams are computed tomography, magnetic resonance and transthoracic and transesophageal echocardiography. In addition to be a diagnostic method, cardiac catheterization is used in therapy for stent implants in thoracic and abdominal aortas [2]. In 1999, stent implantation represented a new treatment option for patients with aortic dissection. The aim of endovascular repair of AAD is to induce aortic remodeling, thus avoiding the trauma and risks associated with the surgical procedure [5].

Among the predictor factors for aortic dissection, arterial hypertension (AH) deserves attention and is present in 62-78% of patients with AAD [2]. In this study, we see a long-time hypertensive patient who did not control his blood pressure and who experienced a hypertensive emergency (HE). HE is defined as a critical elevation of AP with serious medical presentation, progressive damage of vital organs and imminent risk of death, demanding immediate reduction of the AP by parenteral route until a corrective surgical approach, as seen in the patient's situation presented herein.

Intravenous antihypertensive treatment should be initiated in all patients, except those who present hypotension, as soon as the AAD diagnosis of hypertensive origin is determined. The aim of drug therapy is to reduce the left ventricular force of contraction, heart rate, and increase of pulse wave reflex, and to reduce the AP to the lowest level possible without compromising the perfusion of vital organs [2]. Currently, the beta-blocker/vasodilator combination (sodium nitroprusside) is the drug therapy of choice for this purpose in patients with aortic dissection.

The rates of knowledge, treatment and control of SAH are widely varied, and are generally unsatisfactory [6] - a fact that leads to lesions in vital organs. In a population study performed in São José do Rio Preto, Moreira [6] showed that the rate of knowledge of the disease was 72.9% - lower in younger age groups and in males. The socioeconomic classes and education of the patients did not interfere in the results. Moreira also showed that only 52.9% of treated hypertensive patients presented desirable blood pressure levels (below 140 x 90mmHg). The control rate did not differ according to age, gender or body mass index, but was higher in patients with higher education and higher socioeconomic level. These data showed the importance of the "systemic arterial hypertension" problem and its long-term consequences, emphasizing the need for anti-hypertensive treatment with appropriate AP control in order to avoid damage to vital organs.