Total body hypothermia and myocardial cooling are considered effective methods for protecting the myocardium during ischemia in heart surgery. However, the protective effect of total body hypothermia and local myocardial cooling before cardioplegia-induced cardiac arrest is somewhat negated by rapid cooling contracture, which results in coronary artery spasm and the subsequent unequal supply of cardioplegic solutions [1].

Induced cold state by low temperature exposure may be considered as an important stressing agent [2]. Consolidated data from the literature point towards the existence of myocardial structural lesions resulting from the exposure of animals to extreme low temperature [3-5]. More frequently, the structural myocardial lesion described is characterized by vacuolization of mitochondrial cristae and myofilament disarrangement [3-5].

Although it is already described by the literature that low temperature exposure causes mitochondrial cristae and myofilament disarrangement in cardiac cells [4], no report has analyzed the effects of cold stress on nuclear size of cardiomyocytes. In view of this consideration, we have addressed the effects of acute cold stress exposure on the nuclear size of cardiomyocytes in rats.

Twenty adult male Wistar rats weighing 300-310 grams were used in this study. Temperature was monitored as 22ºC, air humidity nearly 60% and the clear-dark cycle was controlled and established as twelve hours each one. Animals had free access to food and water. Animals were randomly selected and separated into two groups: 1) Matched control (CON; n=10) and; 2) Induced hypothermic (IH; n=10): rats exposed to -8ºC during four hours once. All procedures were performed in accordance with ethical guidelines of the National Institutes of Health Guide for the Care and Use of Laboratory Animals and were approved by the Ethical Committee in research of our University (number 1029/06).

Rats were exposed to cold stress by maintaining them at -8ºC for 4 hours in a refrigerated compartment in wire mesh cages. Cold stress was performed only once and rats behavior was examined during all the procedures [4].

In order to verify if the exposure to cold stress was able, we evaluated lipid depletion*+/++++ in adrenal gland cells and glycogen depletion in hepatocytes [4,6]. After adequate level of ether anesthesia, we verified tail tonus and response to external stimuli before and during surgical procedure through evaluation of vibrissa movements, all animals were submitted to a laparotomy. Two pieces of the left liver lobe and right adrenal gland were removed for light microscopy investigation. Fragments were cut into small 1 mm3 pieces and post-fixed in a 1% OsO4 solution for 2 hours, dehydrated and embedded in araldite. Silver or gray thin sections (60-90 nm) were selected on a Porter-Blum MT-B ultramicrotome. The ultra-slices were mounted on copper silver grids with 200 patches and stained with uranyl acetate and lead citrate.

All animals were submitted to a thoracotomy to remove left ventricle. Fragments of left ventricle material were fixed on alcoholic Bouin and mounted on paraffinand sections measuring 10 micra were stained with hematoxylin-eosin. The Karyometric-statistical method was applied according to the same principle used in a previous publication. To calculate nuclear volume we used the following equation proposed by Salvatore [7]: V=(A2 x B)/1,91. V=volume; A=smaller axial measure; B=greater axial measure; 1,91=constant.

Samples were examined by three independent investigators with the same and standardized criteria [4,7].

Immediately after the exposure to cold stress during four hours at -8ºC, we noted the following behaviors in the induced hypothermic group: bristling hair, edema on paws, tremor, stretch of tail and tachypnea.

Body weights were not statistically different between the two groups (IH-Induced Hypothermic group-306.2 ± 20.3 vs. CON-Control group-308.6 ± 29.7; P>0.05). To confirm if the exposure to cold stress was efficient we examined lipid depletion (CON=+++ vs. IH=+) in adrenal gland cortical cells (data not shown) and glycogen depletion (CON=++++ vs. IH=+) in hepatocytes (data not shown) of the both groups. The IH group presented higher lipid depletion in adrenal gland cells (P<0.05) and higher glycogen depletion in hepatocytes (P<0.05), it supports that the exposure to -8ºC during four hours was a stressing agent.

To clarify whether the exposure to a cold stress situation promotes cardiomyocytes nuclear size decrease, we performed an evaluation study in two groups. Comparison between CON and IH groups were performed (Table 1). The exposure to cold stress during four hours reduced nuclear size of cardiomyocytes (P<0.05). The nuclear size of the IH group (Table 1) decreased in approximately 76% compared to the CON group (Table 1). Data variance analysis by Bartko's correlation index ranged between 0.44-0.96 in the both groups depicts the methodology validation. In addition, variation analysis between group's means differences was statistically significant (P<0.05). 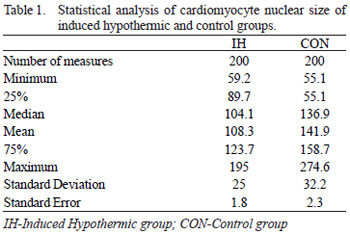 The dramatic improvements in the outcome of heart surgery in recent years have been largely due to the result of advances in methods of myocardial protection. Such methods include widely used hypothermia and local myocardial cooling, which protect the myocardium by lowering myocardial metabolism during ischemia, thus preserving high energy phosphorylated compounds [1]. In this research, we aimed to verify if the acute exposure to -8ºC during four hours causes any change in cardiomyocytes nuclear size of rats. Our data noticed that rats exposed to an acute cold stress condition presented reduced cardiomyocytes nuclear size compared to the control group. This information is helpful, since important information should be considered in methods used for protecting the myocardium during ischemia in heart surgery.

It was suggested that the body go through a stress condition during rapid cooling of the heart in cases of total body hypothermia, process used in heart surgery during myocardium ischemia [1]. It is known that any type of stress causes disruption of homeostasis and an imbalanced anti-oxidant status in several organs [9]. In this study we used cold as an acute stressing agent, considering that when exposed for long term (more than 1 month) it is observed an adaptation mechanism [10-12]. According to Janský et al. [13], the chronic exposure to extreme low temperatures would not decrease cardiomyocytes nuclear size such as we found in our study due to the adjustment condition. Based on our data, we believe that the acute hypothermic exposure causes opposite effects compared to the chronic exposure to cold. These findings are supported by Murad [14], which also used the same model of stress situation and related increase in mitochondrial cristoysis, and suggested an oxidative stress condition in rats exposed to acute cold stress.

Although we used cold as a stress agent in this study, induced hypothermia is also used during heart surgery procedures. A hypothermic cardiac arrest offers the possibility of survival because of the effects of rapid cooling. Hypothermia causes a decrease in cellular oxygen demand, which is advantageous during periods of ischemia [15]. Cardiac surgeons take advantage of controlled hypothermia to perform surgery under circulatory arrest. The induced hypothermia has positive and negative points; Wypij et al. [16] evaluated the negative effects of hypothermic cardiopulmonary bypass in infant heart surgery, Eggum et al. [17] noted that only minor differences in cytokine levels were detected between those with moderate and those with mild hypothermia during cardiopulmonary bypass. Moreover, cold agglutinins are predominately immunoglobulin M autoantibodies that react at cold temperatures with surface antigens on the red blood cell. This can lead to hemagglutination at low temperatures, followed by complement fixation and subsequent hemolysis on rewarming. This autoimmune phenomenon is of unique relevance during cardiac operations when hypothermic cardiopulmonary bypass and cardioplegia are instituted [18]. Our findings may be considered as a negative effect of induced hypothermia, given that it caused reduction of the nuclear size of the cardiac cells.

In summary, our results are the first to indicate that an acute cold stress situation induces cardiomyocyte nuclear size reduction in rats.