Objective: A retrospective study was perfomed in a series of consecutive patients who underwent a Bentall and De Bono procedure. Methods: Data were removed of medical records and follow-up data were obtained from clinical records and direct contact with patients. A total of 39 patients were studied between January 1996 and December 2005. Results: The median age was 47 years (range 14-70). There were 33 males and six females. Eleven (25.5%) patients presented Marfan syndrome and one (2.5%) Turner syndrome. Nineteen (48.5%) patients had hypertension, eight (20.5%) had history of smoking, six (15.5%) had history of alcoholism, eight (20.5%) had dyslipidemia, two (5.0%) had diabetes and one (2.56%) had myocardial infarct previously. Twenty-eight (72%) patients were in II-III NYHA class in the moment of the surgery. Annulo-aortic ectasy was present in 14 (35.9%) patients and aortic aneuryms in 16 (41%). The median time in intensive care unit was 8.79 days with range 2-23 days. Four (10.0%) patients underwent an emergency opertation and 35 (90%) elective. The overall hospital mortality was 5% (2/39). The event-free survival is 94.87% at 1 year and 84.61% at in 5 and 10. The median time of follow-up was 46.5 months (range 14-120 months). Conclusion: The Bentall and De Bono technique obtained excellent results in the short-term and long-term, which support the continued use of the compositive graft technique as the preferred method of treatament for patients with aortic root disease. Our findings confirm the current literature data.

Almost 40 years ago, Hugh Bentall and Antony De Bono [1] described a technique for the combined treatment of diseases of the aortic valve and the segment of the ascending aorta using a valvulated tube in which the coronary artery ostia were reimplanted. Technical variations have been described with the same purpose with variable results of survival [2,3].

In the years since, this technique has gone through several modifications [4] and has become the procedure of choice for the treatment of aortic valve disease associated with the involvement of the ascending aorta. Study results with long-term follow-ups of patients who underwent this procedure showed good results with this technique [5,6].

With the advent of this technique, the outlook has changed, especially for patients with Marfan syndrome [7] who previously died prematurely due to aortic rupture caused by either annuloaortic ectasia or aortic dissection. Now, these patients can be diagnosed and treated with a procedure that could provide them an improved quality of life and a higher life expectancy [8].

In this study, we review our series of patients who underwent combined surgery of aortic and valve root replacement with reimplantation of the coronary artery ostia using the Bentall and De Bono procedures.

Thirty-nine consecutive patients underwent aortic root replacement in our institution - São Paulo Hospital - Federal University of São Paulo - Escola Paulista de Medicina between January 1996 and December 2005. All clinical and surgical data were taken from hospital records and the clinical records of long-term follow-ups were obtained from direct contact with patients and their physicians, as well as from outpatient records. These patients receive regular follow-ups in our aortic disease clinic, and are evaluated every 6 months with a clinical consultation and an image examination (contrast chest computed tomography and echocardiogram). 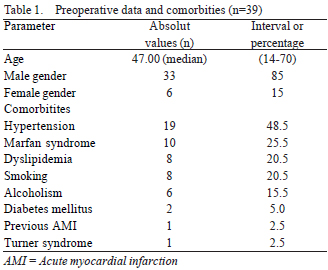 The patients underwent aortic root reconstruction using a composed valvulated tube according to the technical variations of the Bentall operation [4] ("Button Bentall"). The lesioned segment of the ascending aorta and the aortic valve were replaced by a Dacron tube and a mechanical or biological valve, respectively. It is preferable to use a biological valve for patients over 65 years old, without contraindications to the use of oral anticoagulants. Then, the coronary ostia were separately inserted to the base of the Dacron graft. The myocardial protection was obtained by directly administering the blood cardioplegia into the coronary ostia.

The survival and free-event curves were calculated using the Kaplan-Meyer method.

The mean time of stay in the ICU was 8.79 days with a range of 2-23 days. The atrial fibrillation or flutter occurred in three patients (7.5%). There was a need for reoperation in two patients: one for bleeding and another for cardiac tamponade. One patient (2.5%) presented pneumothorax and underwent drainage while still in the ICU. Endocarditis, detected by the presence of vegetation (through echocardiography), occurred in one patient, and the culture showed growth of a-hemolytic Streptococcus and was clinically treated. One patient developed acute pulmonary edema. Ventricular fibrillation occurred in one patient and was electrically reversed. Finally, one patient presented circulatory complications and suffered lower limb ischemia (Table 4).

From the 37 patients who survived the Bentall and De Bono operation, four died after one year of surgery. One patient presented successive episodes of stroke and one died at one year and 5 months after surgery. Another patient was sent to the emergency department of our institution with visual acuity loss and reduced mental awareness and died 48 hours after admission due to ischemic stroke. The third patient during evolution presented Type B dissection and underwent surgical treatment due to the expansion of false lumen. The operation for surgical correction was performed but the patient died during surgery. Finally, one patient (operated due to annuloaortic ectasia and with previous treatment of type B dissection by endovascular stent) returned to the service, where an aneurysmatic formation was diagnosed in the aorta in the thoracoabdominal portion. This patient underwent surgery, but died 3 days after surgery due to renal complications (Table 5).

Thus, from 39 patients found in our records, we found a mean survival time of 46.5 months with the median found of 34 months and a range of 14-120 months. The long-term survival curve is shown in Figure 1, in which we can note that, at the end of 10 years, 84.61% of the patients were still alive. 95% of the patients are in the NYHA Functional Class I and only 5.0% are in Class II. All patients have their international normalized ratios (INR) tested for anticoagulation and are given guidance about medication and appropriate diet to control blood clotting. 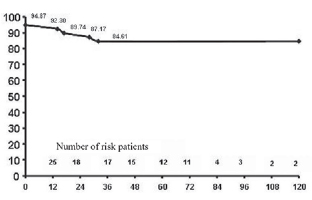 Since 1968, with the introduction of the Bentall and De Bono operation, aortic root diseases now have good outcomes in both the mid-term and the long-term [9,10].

Inconveniences of this technique have been reported in the literature, and currently (with the refinement of the technique) the occurrence of intra-operative bleeding at the level of coronary ostia [6,11] and late pseudoaneurysm in the same place [12] have both decreased . These complications were not observed in our patients and are probably due to the tension in the aorta wall at the level of ostia, or to incomplete resection of the lesioned wall (also at the level of ostia).

Over many years the surgical alternative for this operation was the technique described by Cabrol et al. [2]. It is still used, but only for patients with coronary ostia with some level of difficulty of mobilization - for example, in situations in which there are large aneurysms and for patients who have undergone reoperations [13].

Currently, the focus of discussion is the possibility of replacing the Bentall and De Bono operation by procedures that preserve the aortic valve apparatus described by Yacoub et al. [14] in 1983, and David et al. in 1992 [15]. These new procedures are more complex because of the need for remodeling or reassembling the aortic valve apparatus inside the Dacron tube. The height of the reinsertion of the commissural posts, the tube diameter and the condition of cuspids are variable data that must be necessarily adjusted in order to allow the valve to perform without reflux.

It is important to notice the outcomes of these techniques. David et al. [16] have experience in aortic valve reimplantation surgery, and show a long-term survival rate of 92% of operated patients after 10 years of follow-up with permanence of 90% in the NYHA functional class I.

Yacoub et al. use the technique of aortic root remodeling for correction of the ascending aortic aneurysm in elective surgeries with a mortality rate of 40% of patients over 10 years of study, and a 46,7% mortality rate for the cases with acute aortic dissection Type A. The main cause of mortality of patients found in the correction of these two types of aortic diseases in the follow-up - both in short and long term - was low cardiac output [17].

Another alternative to the Bentall and De Bono operation is the use of a biological valve prosthesis in association with the Dacron tube. Griepp et al. [18] show that in selected cases using this technique, survival at 5 years is 60% - compared to 80% of survival in the American population during the period, aside from the 90% of patients free of thromboembolic events. Recently, the same group published a consecutive series of 206 patients with bicuspid aortic valve who underwent the Bentall and De Bono operation and who were chosen for biological and mechanical prosthesis with a survival of 89% in 10 years [19].

Our study showed that within a maximum of 10 years of follow-up of patients who underwent the Bentall and De Bono operation, 87.17% of them were alive, half of patients still maintained contact with the institution and 95% of them were in NYHA functional Class I.

It is worth analyzing, within this context, the situation of patients with Marfan syndrome - where there is the possibility of involvement of the aortic cuspids due to the fragility of the disease itself - with the use of new preservation techniques. Current studies has shown that, in the long term, the incidence of aortic insufficiency is low when we perform these new mentioned interventions [20].

The main benefit of new techniques of preservation of the valve apparatus is because there is no longer a need for anticoagulation, as opposed to the older techniques. Undoubtedly, this can be a great benefit if we analyze the data of our patients where two of them presented strokes possibly associated with anticoagulation. Although there is no need for anticoagulation for patients who underwent the surgery with preservation of the valve apparatus, there are other risks inherent to this technique, such as aortic insufficiency - which may occur posteriorly - and a more complex process, which requires more experience on the part of the surgeon.

Today, the major discussion is whether this is the right time to replace a known and widespread procedure (with a well described and understood technique over decades with results of low mortality and comorbidity rates) with other procedures that may require a more experienced surgeon (due to the difficulty of the operation) and that present overlapping and even unfavourable results when compared to the Bentall and De Bono technique.

The procedure described by Bentall and De Bono has proven to be effective in treating diseases that involve the aortic root. In 10 years of follow-up, 87.17% of our patients were alive and 95% of them were in NYHA Functional Class I. Studies that compare the surgery described by Bentall with surgeries in which there is valve preservation should also compare and evaluate risks, benefits of each surgery, clinical implications and survival rates. A good level of communication between the clinical doctor and the surgeon is needed in order to indicate the exact timing for the replacement of lesioned aortic segment, and they need to consider the type of surgery that best favors the patient.