Objective: The use of left internal thoracic artery (LITA) in coronary artery bypass surgery is currently recognized as the best option, providing lower incidences of cardiovascular events and superior long-term survival. Now, incremental utilization of these grafts makes a reassessment of its histological structure necessary. Therefore, the purpose of this study was to examine and compare the sequential histological structure of LITA. Method: Specimens of LITA harvested from 18 cadavers, divided into nine proportional segments, were studied. Cuts of each segment were stained by the Verhoeff-Van Gieson technique. The following parameters were analyzed: perimeter of the arterial lumen, thickness of the intima, thickness of the media layer, amount of elastic fiber in the media layer and the elastic fiber density. Results: The collected data showed that perimeter of the LITA decreases downstream on its course, the thickness of the intima is increased in the proximal segments, the thickness of the media layer diminishes throughout its extension, the number of elastic fibers is concentrated in the intermediate segments and the density of elastic fibers is reduced in the proximal and distal segments. Conclusion: Therefore, the findings of the present study validate the heterogeneity of the LITA sequential histological structure.

The utilization of left internal thoracic artery (LITA) grafts in coronary artery bypass graft surgery (CABG) has demonstrated better long-term results with higher patency rates compared to other grafts resulting in a lower incidence of adverse events and greater survival [1,2]. Thus, the use of LITA grafts is currently recognized as the best option in CABG.

The excellent results obtained with LITA grafts are attributed, to a great extent, to the structure of the vessel wall. Additionally, the relative immunity of the LITA to arteriosclerosis greatly contributes to this [3,4] as do specific factors of the vessel wall such as the histologic [5,6], ultra-structural [5] and histochemical [7,8] compositions.

Published histological studies show that the LITA does not present with a uniform structure along its length. This may bear possible implications in respect to the manner of its use and consequently interfere in the surgical results [6,9,10].

Eighteen samples of LITAs removed from fresh corpses during autopsies in the city of Sao Paulo were studied. Dissections consisted of the careful removal of the LITA from its origin in the subclavian artery to its bifurcation at the origin of the upper epigastric and musculo-phrenic arteries. For each sample, the total length of the LITA from its origin to the bifurcation was divided into nine segments of similar lengths (Figure 1). The segments, numbered 1 to 9, were fixed in neutral formaldehyde buffered at 10%. Subsequently, the segments were dehydrated, diaphanized and embedded in paraffin. Five mm-thick cross-sectional histological sections were taken from the middle portion of each segment. The sections were stained by the Verhoeff-Van Gieson technique and prepared for viewing by optical microscope and histomorphometric analysis (Figure 2).

Fig. 1 - The total length of the left internal thoracic artery from its origin to its bifurcation was divided into nine segments of similar lengths 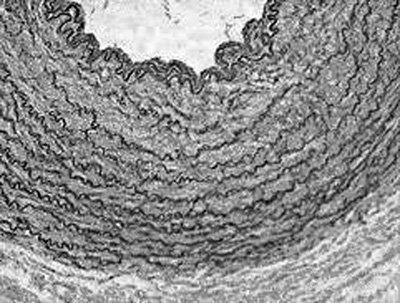 
Images were captured using a Zeiss optical microscope connected to a computer with a high-resolution screen where the images were processed and digitalized. The histomorphometric analysis was performed using the Image-Pro Plus 4 (Media Cybernetics, Inc., Silver Spring, USA) image software.

Direct analysis of the arterial lumen was achieved by magnification of 50 x, while analysis of the intimal layer thickness, tunica media and of the number of elastic fibers of the tunica media was attained at a magnification of 200 x. The density of the elastic fibers was calculated dividing the number of fibers by the thickness of the tunica media. Four different regions from the same section on opposite sides of the specimen were analyzed for more precise results.

The morphometric data are presented as means ± standard deviation. In the comparison of means between the segments, analysis of variance (ANOVA) was utilized followed by the Bonferroni method for multiple comparisons. P-values < 0.05 were considered significant. The statistical analyses were made using the GraphPad Prism Software (GraphPad Software, Inc, San Diego, CA) computer program.

The results show that the internal perimeter of the LITA has a tendency to reduce over its length as is illustrated in Table 1. Figure 2 shows the data of the perimeters of the segments of LITA however, no significant statistical differences were observed when the segments were compared. 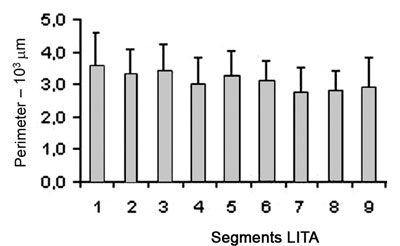 Fig. 3 - The internal perimeter of the left internal thoracic artery tends to reduce over its length

The thickness of the tunica media reduces along its length from the proximal end to the distal end (Table 1). The tunica media of segments 3 and 5 are significantly larger when compared with segment 9 (p-value < 0.05) (Figure 4).

The number of elastic fibers presents with a greater concentration in the intermediate segments (Figure 5), as the density of the elastic laminas is reduced in the proximal and distal segments with the greatest densities in segments 6 and 7 (Table 1). 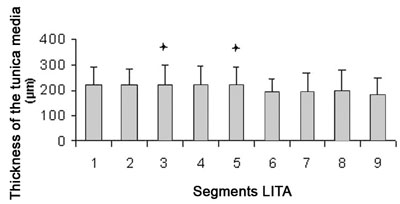 Fig. 5 - The thickness of the tunica media reduces along its length from the proximal segments to the distal segments
Difference of segment. 9; p-value < 0.05

The results of the current study show the histological structure of the wall of the LITA is not uniform along its whole length. Thus, the perimeter of the LITA diminishes along its length, the thickness of the intimal layer is greater in the proximal segments, the thickness of the tunica media diminishes along its length, the greatest number of elastic fibers is concentrated in the intermediary segments and the density of the elastic fibers is reduced in the proximal and distal segments.

Undoubtedly the excellent results with the use of the LITA in CABG are due to, to a great extent, its histological structure. Clinical and experimental evidence show that the internal thoracic artery (ITA) is not only a simple vessel for the transportation of blood to the myocardium. It possesses several biological characteristics such as its relative immunity to atherosclerosis, active vasodilation with remodeling of the arterial wall, its great capacity of nitric oxide release and other endothelial factors, regulating the vasomotor tonus and the auto-repair mechanism [11,12].

It has been demonstrated that the properties of the endothelium of the ITA contribute to this result. ITA grafts promote a greater release of nitric oxide than radial artery (RA) and saphenous vein (SF) grafts [13]. This makes the ITA a 'live graft' capable of dilation (adaptation of the caliber) and consequent increase in the blood flow, responding to the demand of the coronary territory and the area of the myocardium supplied. Additionally, the increased production of nitric oxide by the ITA endothelium has the capacity of reducing and preventing the atherosclerotic process of the distal bed of the revascularized coronary artery with this graft [11].

Previous studies that examined the histological structure of LITA gave inconsistent results. Van Son et al. studied the histology compared to other arterial grafts used in CABG and reported that the ITA presents with a uniform structure along its length [9]. In a future study, correcting this first study, the authors demonstrated the variability of the histologic composition of the ITA over its different segments [6]. This study confirmed that there is a greater predominance of elastic fibers in the medial segment of the ITA than in the proximal and distal segments. On the other hand, the LITA is pharmacologically reactive [15,16]. There are reports that different segments of the LITA exhibit variations in the response to contractility when specific vasoactive agents were tested with the conclusion that the medial segment is a 'passive conduit' but the distal segment (3 to 4 cm from the bifurcation) is pharmacologically reactive. The use of the distal one third of the ITA for anastomosis with the coronary artery was questioned due to the possibility of more spasms [16].

However Nakayama et al. angiographically studied the long-term results of different segments of LITA anastomosed to the anterior descending coronary artery (AD) showing that there was no difference in the increase in diameter between the distal and medial segment. That is, all the segments of LITA are capable of proportionally increasing the diameter and flow, adapting to the demand of the revasculated coronary artery [17].

In previous studies determining factors related to the long-term patency of the LITA, the use of the distal segment was not considered a risk factor. Other factors were identified such as the existence of competitive flow by the native coronary bed, the quantity of coronary bed, the presence of lateral branches causing flow 'steal', dyslipidemia, diabetes mellitus, systemic arterial hypertension, progression of the atherosclerotic disease and technical problems during surgery [18,19,20].

Marx et al. studying the structure of the distal segment of the ITA of 100 patients, found a great variability in the composition of the tunica media. The composition of the tunica media in this segment can be classified as three types: elastic, muscle and hybrid. The elastic predominated in 52% of cases whilst the muscle predominated in 26% and a hybrid pattern in 22%. Thus, even between samples of distal segment of the ITA there is a great histological variability making prior conclusions open to discussion [21].

Nasu et al. examined the pattern of flow velocity of the LITA anastomosed to the AD comparing the proximal, medial and distal segments. There was no difference in total flow among the three segments studied [22]. The ITA graft when anastomosed to the coronary artery is submitted to a diastolic blood flow pattern with modulation of the cellular and humoral components of the graft. Thus, with the forces of shear stress on the graft wall, there is a chronic modification of its structure and caliber, the so-called arterial remodeling [23]. The condition causes the graft to alter its diameter to adapt to the new conditions of flow and demand to the coronary bed.

The most commonly used portion of the ITA for anastomosis to the coronary artery is the distal segment, generally near to the bifurcation. The use of the most distal portion of the LITA provides the greatest length with the possibility of revascularizing segments of the coronary arteries with more distal lesions. The technique of squeletalization allows extra length. This permits the LITA to remain in situ; its use as a free graft requires an additional anastomosis to the ascending aorta, which may cause a reduction in its patency [24].

Additionally, studies have demonstrated that the diameter and location of the ITA segment utilized for coronary anastomosis do not constitute risk factors for increased occlusion of grafts [20,23].

Thus, the data presented in the current study confirm the heterogeneity of the sequential histologic structure of the LITA. The possible implications of these findings on the patency of the graft and the clinical results require further elucidation.

The authors wish to thank Prof. Dr. Oswaldo Giannotti-Filho (in memoriam) for his valuable help in setting up and analyzing of the slides. Also, thanks to Drs Gaia and Rafael Loduca, for their help in collecting the samples and in the preparation of the slides.

5. Sims FH. The internal elastic lamina in normal and abnormal human arteries. A barrier to the diffusion of macromolecules from the lumen. Artery 1989;16(3):159-73.