The BT operation occurred at 8 years, with interruption of medical treatment up to the worsening of cyanosis and dyspnea intensified over the past two years. During this period, the patient used only aspirin.

Visceral situs solitus in levocardia. Normal heart area with a cardiothoracic index of 0.46 and thinning of the middle mediastinum region. Pulmonary vascular network within normal limits.

The worsening of clinical symptoms, increased cyanosis and polycythemia, requiring constant bloodletting for adequacy of hemoglobin levels were determining factors for the indication of surgical intervention.

Additional tests basically showed appropriate diameter of the pulmonary arteries (Figure 1) and the presence of multiple interventricular communications, which could impair the intracardiac correction of the disease. 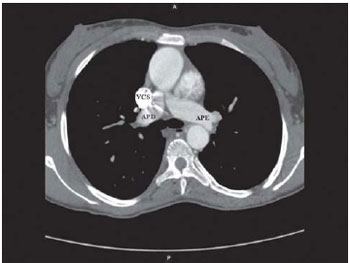 Thus, several possibilities could be used for treatment, among them: the tunneling the left ventricle into the aorta with a connection between the RV and the PT, the confection of other BT or central shunt from the aorta to the pulmonary arteries, Jatene's operation or even repair with bidirectional Glenn or Fontan-type univentricular physiology [1,2].

Median transsternal thoracotomy, opening of the pericardium and external analysis of cardiac structures. The aorta originated anterior to the PT, which had reduced diameter. The external anatomy of the appendages has called our attention, which were both positioned at left, featuring a juxtaposition of atrial appendages.

Dissection of TP and branches was started, as well as superior vena cava (SPV) and the azygos vein, which was ligated and sectioned. The caliber of the right pulmonary artery was near normal, which would allow the use of the univentricular physiology and guided to the bidirectional Glenn operation without cardiopulmonary bypass. Confection of pockets in the transition between the SVC and innominate vein and in the right atrial appendage (RAA) positioned at left, heparinization with 4 mg/kg and the introduction of the cannula between the VCS and the RAA (Fig. 2/video 1). 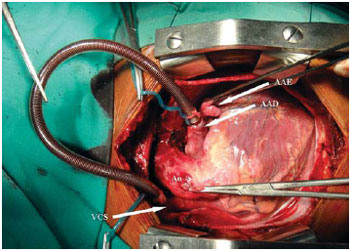 Proximal and distal clamping in the SVC, section and suture of the proximal stump to the right atrium using 6-0 polypropylene yarn. Partial clamping of the right pulmonary artery (RPA), incision in the upper side and end-to-side anastomosis of the SVC in the RPA using polypropylene 6-0 yarn. Unclamping in the SVC and RPA after 16 minutes of using the cannula to drain the blood from the SVC.

Ligation of the pulmonary trunk with 2-0 non-absorbable yarn. Removal of the cannula between the SVC and the AAD. Reversal with protamine sulfate. Review of hemostasis, drainage of the pericardial sac and closure of the chest as usual practice.

Postoperatively, the patient evolved well, with no use of inotropic drugs, extubated early, with improvement of cyanosis, peripheral O2 saturation of 92% and echocardiogram showing adequate drainage flow between the SVC and RPA.

It is important to note that the left BT, since it is restrictive, was not ligated, remaining as another source of pulmonary blood flow beyond the bidirectional Glenn procedure.