Surgical repair of congenital diaphragmatic eventration in a septugerian lady

This study conforms to the principles outlined in the declaration of the Helsinki and was conducted after obtaining approval from the Institutional Ethics Committee on Human Research and informed written consent from the patient and her guardians.

A 72 year lady presented to our institute with symptoms of progressively increasing dyspnoea and left sided chest pain of 2 year duration. Clinical examination was unremarkable except decreased breath sounds and gargling bowel sounds heard over left hemithorax on auscultation. Her cardiovascular examination including 12-lead electrocardiogram, transthoracic two-dimensional echocardiography and exercise testing revealed normal performance for age without any evidence of ischemia. There was no recent or past history of any trauma. Chest X-ray (Figure 1A) revealed a very high position of the left dome of the diaphragm, reaching upto aortic knuckle, marked dislocation of the heart into the right hemithorax and displacement of the stomach and an intestinal loop into the left thoracic cavity. Computed tomography of the chest showed a thinned-out and raised left hemidiaphragm with upward displacement of the abdominal contents (stomach, spleen, and colon) and deviation of the mediastinum to the right. A barium meal examination (Figure 1B) showed multiple bowel loops in the left hemithorax. However, fluoroscopy did not demonstrate any paradoxical movement of the diaphragm. Pulmonary function tests revealed a reduction in vital capacity and forced expiratory volume. Blood biochemical and hematological parameters were with in normal range. 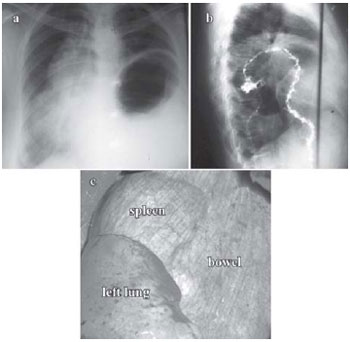 Fig. 1 - A: The preoperative chest X-ray showing a very high position of the left dome of the diaphragm, marked dislocation of the heart into the right hemithorax and displacement of the stomach and an intestinal loop into the left thoracic cavity. B: The preoperative barium meal examination revealing multiple bowel loops in the left hemithorax. C: Intraoperative photograph showing the thoracic cavity filled with abdominal organs up to the aortic arch that were covered with a very thin and completely transparent colourless membrane which represented the diaphragm

The patient was subjected to posterolateral thoracotomy through the left seventh intercoastal space. After opening of the pleural sac (Figure 1C), it was found that the thoracic cavity was filled with abdominal organs up to the aortic arch. These organs were covered with a very thin and completely transparent colourless membrane which represented the diaphragm. The colon, stomach, small intestine and spleen could be readily distinguished through the membrane. The membrane changed peripherally to a less than 2cm wide and rather thin muscular fibrotic rim, which was the only remaining muscle of the diaphragm.

Medially the rim was somewhat wider, whereas the diaphragmatic crura and hiatus were completely preserved and were normal in appearance. The phrenic nerve was found in the normal position and was also of normal appearance. Compression of the nerve was not followed by any reaction from the muscle rim of the diaphragm. The lower lobe of the lung was completely atelectatic and was thus transformed into a fist-sized, compact, blackish mass. But by intensive, careful insufflation, the lobe could finally be fully expanded and assumed an almost normal size and appearance. The thinned-out diaphragm was opened and the abdominal contents were repositioned after lysing adhesions. The incised diaphragm was double-breasted and then plicated by taking multiple interrupted sutures of polypropylene placed in an anteroposterior direction. The sutures were passed without traumatizing the abdominal viscera and were left untied until they were all in place. They were then tied serially, starting with the most medial suture.

Following surgery, the patient was kept electively on mechanical ventilatory support overnight and was extubated on next day. Patient was kept nil orally and the stomach was continuously drained with a Ryle's tube until restoration of the peristalsis and passage of flatus. Within a week, normal food intake was restored without any gastrointestinal symptoms and the patient was discharged from the hospital on the 8th postoperative day. However, the atelectasis of the lower lobe of the left lung showed a clear tendency to recur during the first postoperative month (Figure 2). 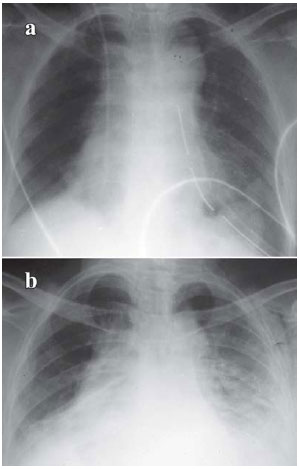 Fig. 2 - Chest radiograph in the immediate postoperative period (a) and at one month following surgery (b)

During this time, the patient was subjected to intensive breathing exercises, with radiological improvement seen at 6 months following surgery. Postoperative spirometry carried out 1 year after the operation showed an increase of the vital capacity from 2.01 to 2.81L and increase of forced expiratory volume from 1.50 to 2.25L. The dislocation of the heart into the right thorax however remained unchanged.

Diaphragmatic eventration refers to an abnormally high or elevated position of one leaf of the intact diaphragm. True eventration of the diaphragm is a congenital abnormality in which all or a portion of one hemidiaphragm is permanently elevated yet retaining its continuity and normal attachments to the coastal margin. It is differentiated from a diaphragmatic hernia by the unbroken continuity of the diaphragm.

Congenital diaphragmatic eventration is a consequence of incomplete or absent muscularization of the pleuroperitoneal membrane which may be due to early return of the midgut to the abdomen [1] and is frequently associated with prematurity, chromosomal and other developmental abnormalities [2]. Acquired diaphragmatic eventration is due to phrenic nerve pathology which may be caused by trauma, especially following instrumentation during delivery, neoplastic infiltration or compression, or following surgery [1]. Acquired eventration, although different from the congenital true eventration, often produces the same radiographic appearance and leads to the same physiologic disturbances.

The diagnosis is usually suggested on the chest radiographs, but it may not be possible to distinguish eventration from a congenital diaphragmatic or hiatal hernia [3]. Fluoroscopy may demonstrate smooth elevation of the hemidiaphragm with little or only slightly paradoxical movement of the affected portion of the hemidiaphragm during forced inspiration, although a paralyzed hemidiaphragm is likely to have paradoxical motion [2]. Ultrasound can be used to assess diaphragmatic motion and thickness, to differentiate between an eventration and a hernia and can help in identifying the context of the eventration. Computed tomography and magnetic resonance Imaging can be used to evaluate the diaphragm in patients with clinical suspicion but with indeterminate diagnosis [4]. Diagnostic laparoscopy may be considered in difficult cases where imaging is not conclusive [5].

Congenital diaphragmatic eventration in asymptomatic individuals does not require any treatment. The routine surgical procedure generally performed in symptomatic individuals is placation of the diaphragm that can be performed either through thoracic or abdominal approach. However, in cases of a very thin membrane with greater dimensions, various substitutes such as Tantalum mesh, fascia lata, Marlex mesh and other materials, sutured over the surface of the diaphragm have been used to reinforce the weak membrane [6]. The postoperative management is of great importance for the final good outcome. The main goals of the postoperative management include rapid restoration of normal gastrointestinal function, avoidance of postoperative ileus and gaseous bowel distension, and measures to prevent recurrence of atelectasis of the lung.

In conclusion, congenital diaphragmatic eventration in an elderly is a distinct and a rare clinical entity with respect to its presentation, complications and treatment. Once diagnosed, early surgical repair is recommended in symptomatic individuals.

6. Schumpelick V, Steinau G, Schlüper I, Prescher A. Surgical embryology and anatomy of the diaphragm with surgical applications. Surg Clin North Am. 2000;80(1):213-39.