Early extubation of children in the operating room after cardiac surgery

Extubation is a critical moment in the postoperative approach of patients submitted to heart surgery. The consequences of the disease in the heart, surgical size, and physiological alterations related to the use of cardiopulmonary bypass (CPB), use of analgesics, hypothermia and inherent instabilities to the complete or partial correction of cardiopathies are factors that must be considered for the decision of ventilatory discontinuation.

When extubation is performed still in the operating room, it requires a coordinated action of the assistance groups, with adequate communication of the multiprofessional team consisted by the surgeon, anesthesiologists, intensivists, physiotherapists and nurses; managing properly pain, ventilatory and hemodynamic instabilities [1].

In selected cases, this process, associated to procedures regulated by protocols established throughout hospitalization, promotes a decrease in hospital expenses, hospitalization period and complicacies, without affecting the assistance quality, being known as fast track approach.

The objective of this work is analyzing the risk profile, clinical and laboratorial evolution of patients extubated in the operating room after cardiac surgery in children using CPB.

The data from the files of children that were submitted to cardiac surgery with cardiopulmonary bypass and extubated in the operating room, for correction of congenital cardiopathies at Hospital Santa Catarina de Blumenau (SC), were acquired in a retrospective manner, by the data base TASY (Wheb Informática). The following data was collected: age, cardiopathy type, surgery performed, time of cardiopulmonary bypass, time of anoxia, values of gas partial pressure in the first gasometry performed at ICU and presence of complicacies.

The surgical technique consisted of standard procedures of the service of asepsis and antisepsis, continuous monitoring of artery and venous pressure, capnography, peripheral oxymetry, noninvasive pressure, telethermometry (nasopharyngeal and rectal) and vesical probing.

The patients received a preanesthetic solution of midazolan at 0.8mg/kg one hour prior to surgery. After monitoring with cardioscopy and peripheral oxymetry, it was performed anesthesia with a mixture of gases (oxygen, sevorane and protoxide of azote) and central and arterial vein punctions. The intravenous induction was carried out by fentanil 10µg/kg, midazolan 0.3mg/kg and cisatracurium 0.15mg/kg. In patients over 1 year of age, the rachidian obstruction with 2 to 5mg of heavy marcaine 0.5% and morphine 0.05 to 0.1mg. The anesthesia before and after CPB was maintained by sevorane and, during CPB, by propophol.

After median thoracotomy and heart exposure, it was administered a dosage of heparin 5mg/kg, performed cannulation of the aorta and both cavas with diameters appropriate to the body surface of each patient and CPB carried out under moderate hypothermia at 25ºC. The oxygenator (Edwards Life Sciences) was determined by the body surface. The cardioplegia used was the cold blood type with solution of ST Thomas (Braile Biomédica), administered in the aorta after clamping, induction dosage of 30ml/kg and repeated each 20 minutes with dosage of 20ml/kg. The hematocryt of CPB was maintained at a high level (24). The decision for extubation was made jointly by the anesthesiologist and the surgeon, at the end of thoracorraphy, individually, after evaluation of: hemodynamic stability (without vasoactive drugs), rhythm (sinus), presence of hemorrhage, cardiopathy type and age (over neonatal period).

At the end of surgery, the patients were transferred to the neopediatric intensive care unit, using a Venturi oxygen mask at 50% and there were collected biochemical exams after 30 minutes of arrival.

The Aristotle Score Risk was determined after filling out the clinical data in the chart available at the site www.aristotleinstitute.org [2].

The statistical analysis was performed with the Student's t test, considered significant with P value lower than 0.05.

The male gender predominated, including nine (60%) cases. The diagnostic of the patients was always determined by echocardiographic diagnostic and surgery referral was carried out by the classic determinations of literature. The interatrial communication type ostium secundum (IAC OS) was observed in six patients, among these, one presenting branch stenosis and pulmonary ring; interventricular communication (IVC) in six, presenting a muscular type, and the rest were the perimembranous type, among these, one association with pulmonary valvar stenosis. We observed a presentation of cor triatriatum, double outlet right ventricle (DORV) and relapse of the subaortic membrane (Table 1). 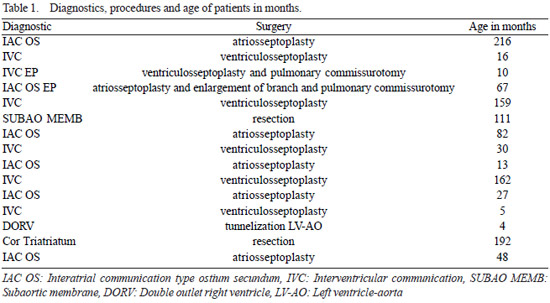 After transferring the patients from the operating room to the ICU, with Venturi mask at 50%, the gasometry, along with other routine biochemical exams, was collected (Table 2). One patient presented respiratory acidosis with mild hypoxemia (PO2 81mmHg), with progressive recovery after 30 minutes, without the need of ventilatory support or chemical reversion of anesthetic agents. 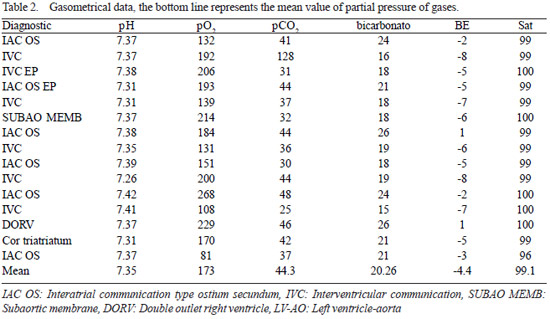 No patient required vasoactive drugs for hemodynamic support. The Venturi mask at 50% is usually applied after extubation, with oxygen flow at 15 l/min. Its use is suspended after the arterial gasometry analysis, allowing the progression to nasal oxygen, using a spectacle-type nasal catheter holder and, afterwards, natural air. The patients are only discharged from the ICU if their oxygenation is adequate without additional oxygen.

Three patients presented significant comorbidities, being Down's syndrome, complete palatine fissure and reoperation. There were no postoperative complications or death. One extubation was involuntary, with no need of reintubation, the same was observed in patients selectively extubated. 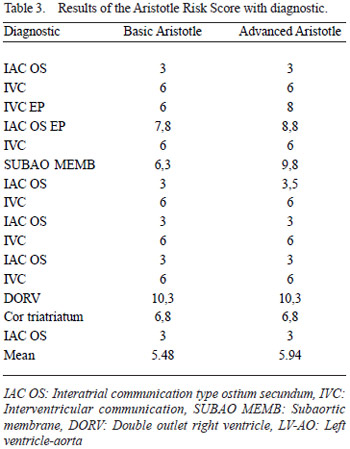 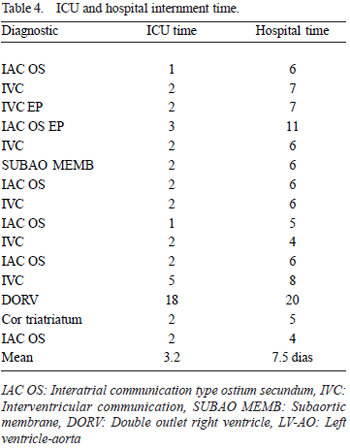 The use of the fast track approach has been encouraged for its potential benefits, especially in simple correction procedures such as interatrial communication, ventricular or persistence of arterial channel [1,4], although it can be performed in complex cardiopathies and reoperations [5].

Preisman et al. [6], comparing two groups of patients, extubated in the operating room or selectively in the postoperative unit, found no differences among mortality, reoperation due to bleeding, incidence of radiological alterations and septical or cardiologic complications. They observed a significant difference in the ICU and hospital internment time in the early group.

In our analysis, we decided to exclude the operated patients for presenting cyanotic cardiopathies; by observing that these patients would not present oxygenation similar to the rest of acyanotic cardiopathies, as it can be observed in the postoperative of the Glenn or Fontan operation, in which early extubation is acknowledgedly beneficial. Similarly, patients holding permeability of the arterial channel and vascular ring were also not included in this study for not suffering the harmful effects known in CPB, in these surgeries, except for patients operated in the neonatal period or premature babies, we always perform the extubation in the operating room.

In Brazil, Báucia & Barbero-Marcial [7], out of 441 children submitted to surgical interventions, including complex lesions and preoperative pulmonary hypertension, extubated 372(84%) in the operating room. The postoperative complications observed presented no correlation with the procedure and there was a low rate of pulmonary complications. They concluded that most of children can be extubated early, with safety and low pulmonary complications secondary to mechanical ventilation, reduced period of ICU internment, hospitalization, children and family stress, and hospital expenses.

Essential components for the execution of the system would be techniques minimally invasive, anesthetic drugs of short duration, modified ultrafiltration and transesophagic echocardiography, enabling extubation from 80 to 90% of patients [1]. The use of electroencephalogram bispectral allows the evaluation of the degree of anesthesia and, therefore, the adequate moment for extubation [3]. The use of spinal block apparently does not alter the possibility of extubation; however, it may enable a good postoperative analgesia [8-10]. We routinely use rachianesthesia in patients over 1 year, regardless of the intention of extubation in the operating room. In these series, therefore, three patients did not receive it.

Kloth & Baum [8], in 102 children submitted to consecutive cardiac surgeries with CPB, achieved 88% of extubation in the operating room. Those late extubated were younger and presenting higher anesthetic risk. The use of spinal block with morphine did not alter the possibility of extubation and none requested special ventilatory care, reintubation or increase in the dosage of vasoactive drugs. Mixed acidosis was occasional and did not require treatment, as we observed in one case o four experience.

Székely et al. [13] studied the predictors of prolonged mechanical ventilation, in 411 patients operated within a year, in order to determine factors associated to ventilation longer than 61 hours and longer than 7 days. After 61 hours, 25% (103) of the patients were still under ventilation and the factors associated were the time of CPB, the relation PaO2/FiO2 after CPB, transfusions and the hydric balance of the first day. The 38 cases that remained for more than 7 days were due to open thorax, use of nitric oxide for pulmonary hypertension, tracheobronchomalacia and peritoneal dialyses, low cardiac output syndrome and neurological events [13]. Neirotti et al. [5] reported that preoperative intubation is also a significant factor for mechanical ventilation permanence, and Prakanrattana et al. [14] related extubation with hydric balance 1/3 lower than daily recomended.

Barash et al. [15] extubated, immediately after surgery, 142 of 197 (72%) patients submitted to cardiac surgery with and without CPB (43%). There were 6% of pulmonary complications, with five (4%) reintubations, with one death not related to the function pulmonary. Schüller et al. [16] defined that early extubation presents minimal risk in selected cases, being successful in 52% of those with 3 and 12 months and 88% of those over 12 months. Out of 4 patients; 2 were reintubated and 2 died. Other authors also observed similar rate [17]. There was no need for reintubation among our cases.

The Aristotle Score Risk [2] is a method used to predict the risk of a surgical procedure, being based on subjective determinations such as mortality potential, morbidity potential and surgical difficulty. The complexity is determined in two phases; the first one is the basic complexity of the procedure, with value of 0.5 to 15, not considering other factors that may affect each case. The advance considers the factors that may influence the result such as age, comorbidities and anatomical variations, adding a maximum of 5 points; thus, enabling to evaluate the performance of institutions in several parts of the globe and measure variations of results. The values found in our series belong to less complex cardiopathies, without significant comorbidities, determined by slight variation from the basic score to the advanced score.

Extubation in the operating room after cardiac surgery using CPB, in selected pediatric patients holding acyanotic congenital cardiopathies and low risk score could be performed without complications in this sample. For the patients with Aristotle Score Risk over 6, there is a longer period of hospital internment not affecting the internment period in the Intensive Care Unit.