Introduction: The composite mechanical valve conduit replacement is the standardized operation for aneurysms of the aortic root. The objective of this study is to evaluate the long-term surgical results of aortic valve-preserving procedures to the root reconstruction. Methods: From 1996 to 2008, 54 consecutive patients underwent two different techniques of valve-sparing aortic root operation (40 Yacoub operations and 14 David operations). Mean age was 48 ± 14 years (range 17 to 74). 36 patients (66.7%) were male and 16 (29.6%) experienced Marfan's syndrome. The mean Euroscore was 4 ± 1.25. The mean follow up time was 4.1 years (from 49 days to 10.9 years). Clinical and echocardiographic parameters were analysed. T-Student paired test, the McNemar Non Parametric test and the Kaplan-Meyer Outcome Curves have been used. Results: The hospital mortality was 5.6% and the average hospitalization time was 9±4 days. One non related late death (2%) was reported. The actuarial survival and freedom from reoperation were respectively 94.4% and 96% within 11 years of follow-up. There were benefits in reduction of functional class (P=0.002; 78% CF I), in reduction of aortic regurgitation (P<0.001; 78% with or without discrete reflux), in reduction of systolic and diastolic diameters, end-sytolic and end-diastolic volumes of left ventricle (respectively P=0.004; P<0.0001; P=0.036 and P<0.001). Two (3.9%) patients required aortic valve replacement due to severe aortic regurgitation during this same period. No thromboembolic, endocarditis or bleeding events were reported during the follow-up. Conclusion: The valve-sparing operation for aortic root aneurysms is an effective alternative to the use of a mechanical valve conduit replacement.
INTRODUCTION

Regardless of the etiology in surgeries of aneurysms involving the aortic root, the preservation of the aortic valve happened only in 1.7% of the cases, while the mitral repair procedures were much more frequent (46.5%) [1]. The standard operation to treat the aortic root diseases is the mechanical valve conduit replacement ("Bentall" procedure). This procedure represents a low risk, reproductive and longevity surgical option. However, thromboembolic and/or bleeding complications related to sustained anticoagulation are the problem [2,3]. On the other hand, when the biological composite graft is used, the need for reoperation is also an issue because of the valve degeneration.

The aortic valve-sparing operations are interesting alternative techniques aiming at improving longevity free from mechanical- or biological valve-related complications. Two procedures were described for this purpose: the remodeling technique proposed by Yacoub [4], with the excision of the coronary ostia and resection of aortic sinuses up to a rim of 2 to 3 mm of aortic wall (and complete resection of the aortic root) sutured with Dacron tubular graft trimmed to produce tongue-shaped extensions, thus creating three new Valsalva sinuses (Figure 1). Alternatively, David and Feindel [5] proposed the reimplantation technique, in which the main difference from the procedure described above is related to the inside graft fixation of the commissural pillars and aortic ring (Figure 2). 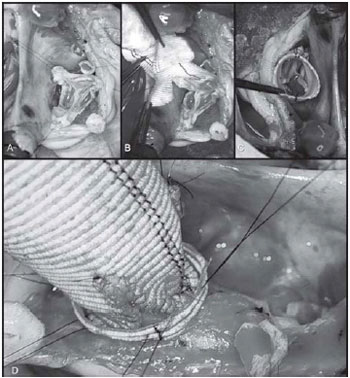 Fig. 1 - Intraoperative images: A. The sinuses of Valsalva and the ascending aorta were excised, leaving a 4mm rim attached to the aortic annulus, and both coronary ostia. B. A vascular Dacron graft was trimmed to produce tongue-shaped extensions for replacement of the excised sinuses. C. These tongues were sutured to the aortic annulus; the coronary ostia were reimplanted into the graft using the "button" technique. D. External fixation of the aortic ring with a Dacron strap as a procedure complementation to the classic technique proposed by Yacoub 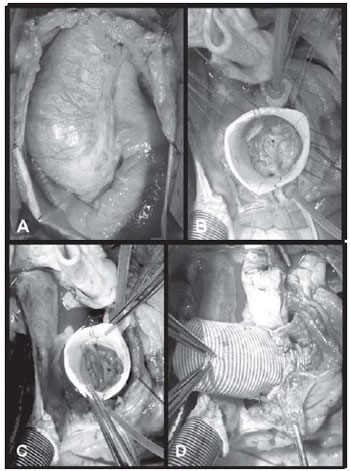 Fig. 2 - Intraoperative images. A. The ascending aortic aneurysm. B. The graft fixed in the left ventricular outflow tract. C. Fixation of commissural pillars and aortic ring in the graft, offering an external sustentation to this structure. D. Reimplantation of the coronary ostia in the graft using the "button" technique, illustrating the final aspect of this surgery

However, there may still be problems to be addressed. Even if in the remodeling technique a more physiological reconstruction of the aortic root occurs, the dilation of the aortic ring may be a problem, unless some kind of external ring fixation is performed (Figure 1D). In the reimplantation technique, despite the variations proposed, the possibility of non reconstruction of the Valsalva sinuses may result in an alteration of the hydrodynamic properties of the coronary flows and a late structural failure of valve leaflets due to traumatisms within the tubular graft [6,7]. In spite of the low reproducibility and the more demanding technical efforts to use it regularly, the valve-sparing techniques can be applicable and reports show 10-year plus follow-up patients displaying very low complications rates [8-10].

A retrospective review of our database, clinical and echocardiography data from chart review and phone interview, and an invitation to do a 2008 echocardiogram if none had been done in the respective year were all used in order to collect relevant information.

Between January 1996 and July 2008, 54 consecutive patients with aortic root disease underwent an aortic valve-sparing operation (associated procedures in 11.1%). The remodeling or reimplantation valve-preserving aortic root reconstructions were chosen at surgeon's discretion, of which 74% were remodeling and 26% reimplantation.

Patients' demographics and intraoperative data are in Table 1. 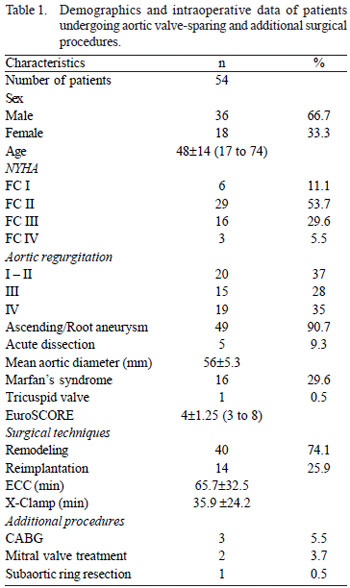 If the transesophageal echocardiogram and computed tomography showed an acute aortic dissection, surgery was initiated with no further diagnostic procedures. The decision to preserve the aortic valve was made always intraoperatively by the surgeon after inspection of the leaflets and the root geometry (whenever the regurgitation was associated to annular dilatation and it was possible to restore valve competency).

The average follow-up time was 51.4 ± 36.5 months (0-133 months). Clinical information was taken from the chart records or by phone interview with 96% of patients. Complications such as endocarditis, pulmonary or systemic thromboembolism or bleeding were registered following the recommendations of the American Association for Thoracic Surgery and the Society of Thoracic Surgery [11].

Postoperative echocardiogram evaluations from 2008 were completed in 88% of patients.

Continuous variables are expressed as mean ± SD. Both the paired t-Student and the McNemar Non Parametric tests were used in the analysis of quantitative and qualitative variables respectively. The Kaplan-Meyer Outcome Curves were used for the evaluation of time-related variables. A P value < 0.05 was considered significant. All data analyses were performed with SPSS 13 for Windows (SPSS Inc.). 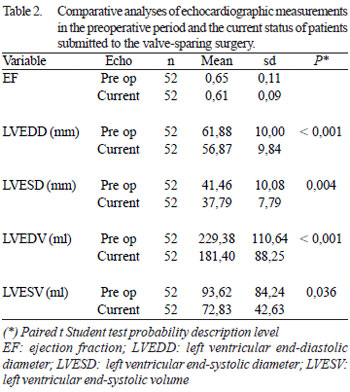 The late mortality was 1.9% related to pancreas cancer. 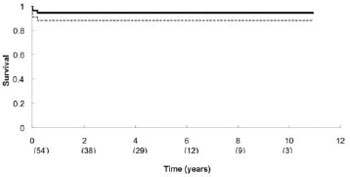 Two (4%) patients required reoperation for significant aortic regurgitation within 4 and 10 years. One had Marfan's syndrome, both had preoperative severe aortic regurgitation due to aortic annulus dilatation, and were submitted to the remodeling valve-preserving aortic root reconstruction. The actuarial freedom from reoperation due to incompetence of the reconstructed aortic valve was 96% (Figure 4). There was no mortality in reoperation for implantation of a mechanical valve. Neither thromboembolic, nor bleeding, nor endocarditis events were observed. 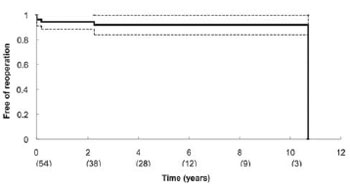 Fig. 4 - Actuarial freedom from reoperation of the reconstructed aortic root (as the patient with longer follow-up time needed to replace the aortic valve, the curve falls to zero) 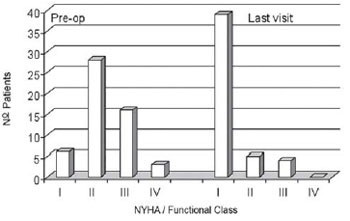 Fig. 5 - Symptoms related to aortic regurgitation before the surgery and their current situation 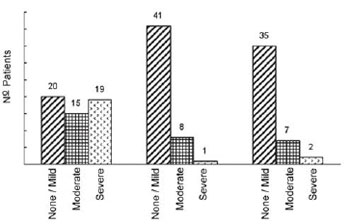 Fig. 6 - Grade of aortic valve preoperative regurgitation, in the early postoperative (from 6 months to 1 year), and in the last visit. Absolute number of patients provided

There were significant reductions of systolic and diastolic left ventricle diameters and volumes maintaining a normal ejection fraction.

Life expectancy following the aortic root surgery despite the surgical technique applied has showed to be similar to the expected survival curve of the general population [12]. The composite mechanical valve conduit choice implies in the need for life-long anticoagulation whereas the valve-sparing surgery choice may raise questions regarding the longevity of the procedure.

Surgeries to correct aortic diseases performed in specialized centers with high surgical volume, present distinguished results with low operative mortality. In these centers, more demanding procedures must be encouraged in order to give the surgical community the best option for any specific operation.

The reduced number of aortic valve-sparing surgeries is attributed to the major complexity of the procedure, to the difficulty in reproducibility and to a higher risk of aortic regurgitation recurrence. Not only is it considered by some as technically demanding but also an artistic procedure [13].

Some authors, from experimental studies, described the aortic root as a functional unit, associating the aortic ring's sigmoid shape, the intercomissural triangles and the sinuses of Valsalva [14]. The valve-preserving aortic root reconstruction surgery is frowned upon due to the difficulty in the reproduction of the perfect root geometry, without damage to either coronary flow or performance of the aortic leaflets thus avoiding traumatic wastage [15]. In the effort to reproduce this geometry, many valve-sparing reimplantationtechniques have been proposed, including the utilization of the Valsalva graft. Nevertheless, despite the difficulty in obtaining the perfect reconstruction of the aortic root geometry, several groups, including ours, have achieved satisfactory results in the late evaluation of such surgeries [16-18].

Additional preoccupation exists when the valve-sparing operation is done in Marfan's patients (1/3 of the patients of our study), because of the preservation of an altered structural leaflet (mutant fibrilin). In this study, only one Marfan's patient underwent aortic valve replacement probably due to an annular non-external fixation rather than a valve-related problem. It is important to point out that long-time follow-up with many patients is required to reach definitive conclusions. However, other series have already demonstrated similar results as those with patients both with and without this genetic alteration [19].

Reinforcing Schäfers's group's idea, Hanke et al. [17] demonstrated that the recurrence of aortic regurgitation was related to three factors: Marfan's syndrome, the need for repair of one or more leaflets of the aortic valve and the diameter of the aortic ring. They showed that the remodeling technique for larger rings resulted in more regurgitation, while the reimplantation technique for smaller rings resulted in more leaflet deterioration. For these reasons, we started to analyze the aortic ring more carefully, which was not initially our target study.

In view of the recurrence of aortic regurgitation in two of our patients submitted to the remodeling valve-preserving surgery (5%), due to annular dilation, an external fixation of the aortic ring is now routinely done, as a technique complementation to the classic procedure proposed by Yacoub (Figure 1D).

However, the difference in long-term results concerning patients free from aortic valve reoperation can be attributed to an individualized technique chosen according to each patient's characteristics rather than a choice based entirely on the surgeon's preference for one technique over the other.

What most concerned us was the 20% of the patients, during follow-up, developed significant aortic regurgitation (16% moderate and 4% severe). It is possible that part of these results may be attributed to the learning curve; to an inadequate technique chosen; to an elevated number of preoperative patients with important aortic regurgitation; and possibly to maintenance of previous damaged aortic leaflets.

This study has some limitations: (i) it is a transversal study with all difficulties of retrospective analyses; (ii) the reduced number of patients is an issue frequently associated with complex procedures and may raise difficulties to analyze comparative results; (iii) 60% of the patients' follow-up was shorter than 5 years and only 10% of the patients were evaluated in a 10-year period; and (iv) even though the analysis shows a good performance of the valve-sparing technique, it does not reveal whether this procedure has better long-term results when compared to a mechanical valved conduit. Currently, we are analyzing data which may enable the comparison of both procedures.

Because of these results, we suggest that the valve-sparing operation be performed by seasoned surgical groups in ascending aortic surgeries. The technique used (remodeling or reimplantation) must be chosen according to each patient's anatomic characteristics. In addition, specific care must be taken in order to avoid aortic regurgitation recurrence during follow-up, especially in patients with either Marfan's syndrome, or prolapsed valves which may need repair or dilated aortic rings.