OBJECTIVE: To evaluate the results of intraoperative radiofrequency ablation with biatrial procedure in the treatment of chronic atrial fibrillation in patients with associated cardiac disease. METHODS: Between February 2008 and May 2009, 15 consecutive patients were underwent mitral valve procedure plus modified radiofrequency biatrial ablation of chronic atrial fibrillation. The mean age was 47.73 ± 9.85 years and 60% were male. The mean left atrial diameter was 55.06 ± 7.56 mm. RESULTS: There were no hospital mortality or complications related to radiofrequency ablation. The mean follow-up period was 7 ± 4 months. At the time of hospital discharge nine (60%) patients were in sinus rhythm. After a mean follow-up period 11 (73.3%) were in sinus rhythm. CONCLUSION: Intraoperative biatrial radiofrequency ablation is a safe and effective technique for the treatment of chronic atrial fibrillation, with satisfactory midterms outcomes in terms of conversion to sinus rhythm.

Chronic bacterial infections caused by Chlamydia pneumoniae and chronic periodontitis, as well as certain viruses have been associated with risk for systemic conditions such as coronary artery disease and atherosclerosis [2]. Species associated with chronic periodontitis can enter the blood flow through gingival blood vessels and migrate to the atheromatous plaques [3].

Traditional risk factors and well-established coronary diseases, including hypertension, diabetes, obesity, smoking and physical inactivity does not fill half of the cases affected with this disease [4].

The basis of this study was to observe patients presenting with acute ischemic heart disease with and without chronic periodontitis, the behavior of the lipid, hematological and blood biochemical profile as well as assessing biopsies of internal mammary and coronary arteries to detect the presence of Chlamydia pneumoniae and bacteria related to chronic periodontitis.

One hundred and eighty-one patients with acute ischemic heart disease, diagnosed by electrocardiography and/or angiography as well as clinically and biochemically (CK,CK) are included in this study. All patients were informed verbally and in writing to participate in the research, and the study was approved by the Research Ethics Committee of the Faculty of Medical Sciences at UNICAMP. The periodontal examinations were performed within the first 24 hours, from admission at coronary care unit of HC/UNICAMP. Of the total patients, 63 are toothless as gender distribution, mean age and standard deviation (43 men and 20 women, mean age 67.5±8.55 years). The remaining 118 patients were subdivided into two subgroups: fifty presented severe chronic periodontitis (31 men and 19 women, mean age 55.1±11.29 years), with more than 30% of teeth affected with loss of periodontal clinical attachment level > 4 mm, with more than five periodontal pockets with probing depth > 5 mm and presenting at least 20 dental units) and the other with mild chronic periodontitis (40 men and 28 women, mean age 54.8±10.37 years), with less than 30% of teeth affected with loss of clinical attachment level < 3 mm and without periodontal pockets, as well as 20 dental units. This classification of mild and severe chronic periodontitis is accoding with consensus on chronic periodontitis of the American Academy of Periodontology [6].

Samples of 17 coronary arteries with atherosclerosis and same number of internal mammary artery (used as grafts) with no atherosclerotic degeneration were investigated for detection of periodontal pathogens and Chlamydia pneumoniae. Fragments of specimens of coronary and mammary artery were obtained during surgery for coronary artery bypass grafting, and were removed from the site of the anastomosis in the coronary arteries and distal segments of mammary grafts during its preparation. These patients were followed-up by the Cardiac Surgery and Cardiology Discipline Department at Clinics Hospital of the Faculty of Medical Sciences, State University of Campinas (HC-UNICAMP). All arterial specimens were obtained from the same group of patients with severe chronic periodontitis.

Immediately after the biopsy, the arterial specimens were frozen in nitrogen and stored at -80°C. The detection of pathogens was performed by analysis of polymerase chain reaction (PCR).

Demographic features, individual habits and cause of loss of teeth units in toothless were also observed. Patients in the study showed no other cardiac or infectious disease, and were not taking any medication or antibiotic drugs that could reduce cholesterol levels, as well as not having undergone any periodontal treatment in the last six months.

When admitted to the coronary care unit, all patients in the study underwent fasting blood sample for diagnosis of lipid, glycemic and haematological profile. All examinations were performed in the clinical pathology laboratory of the hospital.

The patients were periodontally examined by a single examiner, using a mouth mirror, direct lighting and manual probe PCP-UNC 15 in the hospital bed. The PCP-UNC 15 probe was used to detect the level of clinical attachment and periodontal pocket depth and is expressed as the distance in millimeters from the cemento-enamel junction in the dental unit and gingival margin at the bottom of the gingival pocket. These parameters were measured at six sites per tooth (mesiobuccal, mid-buccal, disto-vestibular, mesiolingual, mid-lingual and distal-lingual) in the contralateral superior and inferior quadrants, with a threshold of loss of clinical attachment level greater than 4 mm and > 5mm in the periodontal pockets, being considered affected by severe chronic periodontitis and also presenting at least ≥ 20 dental units.

The patients' age and the variables that compose the lipid profile, as well as white cell counts were described by mean and standard deviation.

The hypothesis of equality between these means in the three groups was tested by analysis of variance (ANOVA). Comparisons between each possible pair of means were assessed using the Scheffé test [7], considering statistically significant the differences between means whose P value was less than 5%. All these data were assessed using the software STAT-VIEW 5.0 (SAS Institute Inc., Cary, NC, USA).

The study was performed from November 2000 to May 2005 when we selected 181 patients with acute ischemic coronary disease, by chronological addition at HC/ UNICAMP, according to the inclusion criteria specified.

Figures 1-3 show the groups with and without chronic periodontitis and traditional risk factors of acute ischemic heart disease. 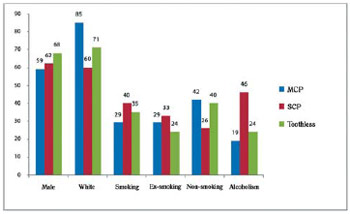 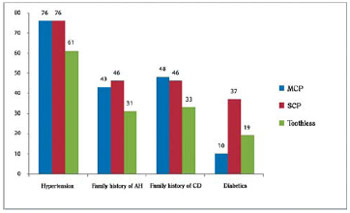 The body mass index was equivalent in all three groups, according to the classification of obesity in adults from the World Health Organization [8].

It was observed prevalence of male gender, white race and hypertension, on which these percentages were above 70% on average in the three groups.

Family history of hypertension and cardiovascular diseases have not reached the percentage of 50% on average in the three groups.

The incidence of diabetes in both groups was around 20% with higher prevalence in the group with severe chronic periodontitis in approximate percentage of 37%.

Figure 4 shows the means and standard deviations in groups of lipid and glycemic profiles. Although no statistically significant differences between groups in lipoproteins (HDL-C, LDL-c) were found, we observed reduced values of the limit of HDL-cholesterol that could be considered low, with a drop more pronounced in the group with severe chronic periodontitis in approximately 20% as well as 8% in the toothless group. 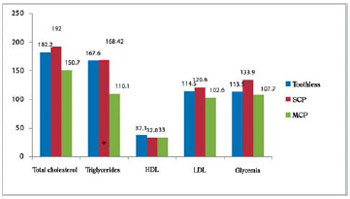 Moreover, LDL-cholesterol was above the normal range and therefore away from the value considered optimal, in approximately 20% in patients with severe chronic periodontitis and 15% in toothless patients, but with normal values in the group with mild chronic periodontitis.

Triglycerides and LDL-cholesterol levels were approximately 13% and 20% above the limit values in the groups with severe chronic periodontitis and toothless group, while total cholesterol was in normal levels in the three groups.

Blood glucose was high in approximately 20% of the limit in the group with severe chronic periodontitis, but with normal values in other groups. 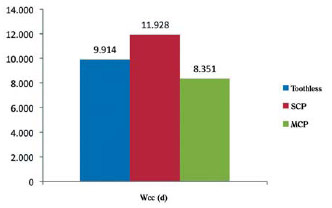 DNA from periodontal bacteria were detected in samples from the coronary artery in the following proportions: Porphyromonas gingivalis (52.9%), Aggregatibacter actinomycetemcomitans in six (35.3%) biopsies, Prevotella intermedia in four (23.5%), and Tannerella forsythia in two (11.7%) samples. Seven (41.1%) specimens were positive for two or more periodontal bacteria. The association between Porphyromonas gingivalis and Aggregatibacter actinomycetemcomitans was found in ten of the 17 arteries studied (Figure 6). 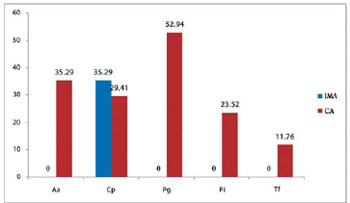 In our study total cholesterol level was normal in all three groups, but was higher in the group with severe chronic periodontitis, a fact confirmed by other researchers [11,13].

More recently, Monteiro et al. [14] has shown that in individuals without coronary disease but with severe chronic periodontitis, the levels of triglycerides were high, while HDL cholesterol proved to be reduced, citing similarities with this study.

High concentrations of LDL-cholesterol and triglycerides and low levels of HDL cholesterol are well established as risk factors for coronary heart disease.

Patients who presented severe chronic periodontitis in our sample, and several clinical periodontal parameters in other studies showed high levels of triglycerides [16].

Specific bacteria that cause severe chronic periodontitis induce a response in the host, with the production and release of pro-inflammatory cytokines in gingival tissues, which flow into the blood flow, triggering a hepatic response of the liver, thereby raising levels of acute-phase proteins, mainly C-reactive protein [17].

In patient with chronic infections with Chlamydia pneumoniae, as diagnosed by their specific antibody titers, it has been also demonstrated an inverse relationship with HDL-cholesterol [19].

The white cell count (Figure 5) represents a recent indicator of risk for coronary heart disease. This biochemical finding may be associated with unidentified infectious processes (chronic oral infections), which in our sample is higher in those with severe chronic periodontitis [22].

Studies in animal experiment demonstrated that intravenous administration of bacteria that cause chronic periodontitis increases the formation and calcification of atheromatous plaques [23].

Haraszthy et al. [3] examining 50 biopsies of aortic arteries with atheromas and using molecular biology techniques, found that 22 (44%) arteries were positive for several periodontal bacteria, including Tannerella forsythia in 30%, Porphyromonas gingivalis in 26%, Prevotella intermedia in 14% and Agregatibacter actinomycetemcomitans in 18%, thus showing similarity with our sample.

In another study using molecular biology techniques [24], the researchers detected Agregatibacter actinomycetemcomitans and Prevotella intermedia in approximately 31% of multiple arterial specimens. In our sample, seventeen of coronary arteries with atherosclerosis studied, one-third (33%) had both periodontal bacteria.

Using the polymerase chain reaction, Aimetti et al. [26] found 33 external carotid atheromas to research of five species of bacteria that induce severe chronic periodontitis, in which the bacteria most prevalent (nearly 70%) was the Tannerella forsythia, contrasting with our findings (12%).

Comparing the presence of periodontal bacteria in gingival pockets in patients with various levels of involvement of coronary arteries, Gotsman et al. [27] detected a higher prevalence of Porphyromonas gingivalis in those with a greater number of vessels affected. In this direction, Stein et al. [28] detected using hybridization techniques, the prevalence of Porphyromonas gingivalis in gingival pockets, in patients with acute myocardial infarction in comparison to their respective healthy controls.

However, in case-control study [29], the researchers found a higher prevalence of Prevotella intermedia when comparing patients evaluated for coronary artery disease and their respective healthy controls.

Zhang et al. [30], using animal models and inoculating once a week for four, eight and twelve consecutive weeks the Porphyromonas gingivalis in iliac arteries, they observed that the animals developed inflammation of the arterial intima and increases in other blood biochemical parameters related to inflammation throughout the study.

Internal mammary artery is considered a vessel protected from the atherosclerotic process, thus being an ideal graft for the bridge and free from infection caused by periodontal microorganisms, in contrast to infections caused by Chlamydia pneumoniae (35.29%).

The rate of detection of Chlamydia pneumoniae in our sample was 29.41% in the coronary artery, while in other studies the detection rate was around 40% [31], thus showing similar data with our study.

Based on these data, the hypothesis that the bacteria associated with severe chronic periodontitis can penetrate the ulcerated gingival epithelium, with access to blood flow and lodge in atheromatous plaques, as well as if these infections may alter the lipid profile in patients who suffered ischemic heart attack.

Therefore, further studies are needed to elucidate this relationship with large number of patients by means of longitudinal studies, and note mainly the frequency and incidence of microorganisms associated with gingival disease in periodontal pockets and in atheromatous plaques of patients with acute ischemic heart disease.