BACKGROUND: Hospital mortality for surgical reconstruction of the outflow of the right ventricle with pulmonary homograft is variable. OBJECTIVES: To identify risk factors associated with hospital mortality and clinical profile of patients. METHODS: Children underwent reconstruction of the outflow tract of right ventricle with pulmonary homograft. Analyzed as risk factors for the clinical, surgical and morphological aspects of the prosthesis. RESULTS: Ninety-two patients operated on between 1998 and 2005 presented mainly pulmonary atresia with ventricular septal defect and tetralogy of Fallot. Forty patients were treated in the first month of life. He needed 38 surgeries to Blalock Taussig due to clinical severity. The median age at surgery for total correction was 22 months, ranging from 1 to 157 months. Size pulmonary homograft ranging from 12 to 26 mm and length of bypass was 132 ± 37 minutes. After surgery there were seventeen deaths (18% cases) on average 10.5 ± 7.5 days. The predominant cause was multiple organ failure. In the univariate analysis between the types of heart disease, they found in favor of age at surgery, size of homograft, pulmonary valve Z value, CPB time, maintaining the integrity of the homograft and pulmonary tree change. There was no statistical differencein hospital mortality between the variables and the type of heart disease. CONCLUSION: The congenital obstructive right requires surgical care in the first days of life. The total correction surgery has a risk rate of 18% but there was no association with any variable studied

From the 80s, the cryopreserved pulmonary homograft has become the material of choice for reconstruction of the right ventricular outflow tract due to its greater availability, lower rate of calcification and better outcomes [2,3].

In recent years, promising studies are being performed with the use of decellularized homograft for the correction of obstructive cardiopathies. They present good midterm outcomes, with decreased pulmonary failure, prolonging the graft's life [4].

In the period from 1st January 1998 to December 31, 2005, 143 patients received cryopreserved pulmonary homograft for the surgery for total correction of congenital heart disease. Of these cases, 92 were considered suitable for the study.

Inclusion criteria were the use of cryopreserved pulmonary homograft in surgical reconstruction of the right ventricular outflow tract or replacement of a heterograft implanted in this position in previous surgery, and medical records with complete data.

Patients who had undergone reconstruction of the right ventricular outflow tract with aortic homograft and pulmonary homograft treated with different technique that cryopreservation were excluded from this study.

In the medical records, data regarding gender, type of heart disease, age at first visit and at surgery, previous surgery, presence of alteration in the pulmonary tree and the results of cardiac catheterization were collected.

The surgical data assessed were homograft size - in millimeters, the Z score of the pulmonary valve, maintenance of the homograft integrity, CPB time, aortic clamping time and rectal temperature during surgery. The data assessed in the postoperative period were length of stay in intensive care unit, clinical events and death.

The integrity of the pulmonary homograft may be altered by the surgeon, in cases on which he decreases the size of the valve ring, removes one of their leaflets or replaces them by a monocuspid with the same material or another.

Hospital mortality was considered the patient's death during surgery or during the period of stay in intensive care unit for recovery from surgery to repair the heart disease.

The surgeries were performed by the same surgical team and postoperative care given by the team of the Intensive Cardiac Care Unit of this hospital.

The patients underwent surgery through a median transsternal thoracotomy and cardiopulmonary bypass was installed after cannulation and heparinization. In 57 patients, moderate hypothermia was performed and deep hypothermia in 18. The total cardiac arrest was obtained in 26 cases and myocardial protection was performed by infusion of crystalloid cardioplegic solution into the aorta.

In patients with tetralogy of Fallot and pulmonary atresia with interventricular communication, the heart repair was performed by the transventricular approach, with closure of the interventricular communication with the use of goretex or bovine pericardial patch in a continuous suture with 5-0 or 6-0 Prolene yarn. In patients with tetralogy of Fallot the muscles of right ventriculcar outflow tract were resected if they were hypertrophic. After, pulmonary artery reconstruction with a cryopreserved pulmonary homograft was performed in both heart disease. In some cases of pulmonary atresia it was necessary interposition of a Hemashield patch in the outflow tract, by connecting the pulmonary homograft to the right ventricle.

In 12 patients with transposition of great arteries with interventricular communication and pulmonary stenosis, it was performed Rastelli operation, as well as in two cases of corrected transposition with interventricular communication and pulmonary valve stenosis. In other patients, septoplasty was performed with patch and interposition of a pulmonary homograft for reconstruction of the right ventricular outflow tract.

The disconnection of cardiopulmonary bypass was obtained after full heat of the patient, with reversal of heparinization and rigorous review of hemostasis, with subsequent sternotomy by anatomical planes. After hemodynamic stabilization, patients were referred to the cardiac intensive care unit.

For statistical analysis it was separated the sample into groups according to the type of heart disease. For each of the variables described above was used Fisher's exact test, on which the null hypothesis of the existence of independence between the type of heart disease and the variable analyzed was tested, versus the alternative hypothesis of dependence. Within each group of heart disease we tested each variable in relation to the outcome of death. For combined evaluation of the variables on the probability of death was adjusted a logistic regression model, considering the Wald test for decision making. In the model were included the variables that in the univariate analysis showed P values < 0.20. P values < 0.05 indicated statistical significance. Data were organized into an Excel spreadsheet and analyzed using software Statistica v.8.0. 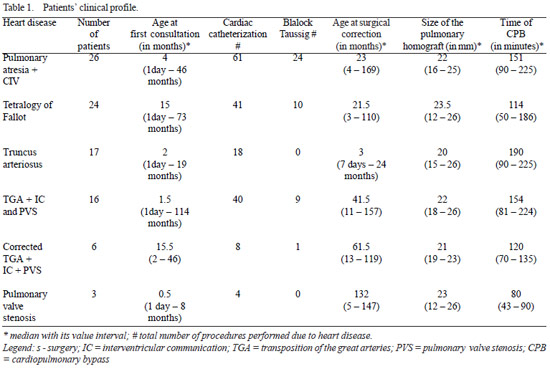 The mean time of outpatient follow-up of these patients was 106±62.7 months. During this period, 139 cardiac catheterization were performed, both for diagnostic and therapeutic procedure. Pulmonary atresia with interventricular communication and tetralogy of Fallot were the heart diseases that showed greater indication for cardiac catheterization.

The previous palliative surgeries were performed in 42 patients. Surgery of systemic-pulmonary anastomosis (Blalock-Taussig shunt) was performed in 38 patients, being more suitable in patients with pulmonary atresia and interventricular communication and tetralogy of Fallot. The mean time from palliative surgery until surgery with homograft was 48.19±40.26 months.

The median age of patients at the time of surgical correction of the heart disease was 22 months, ranging from 1 to 157 months. Thirty percent of the sample (28 cases) underwent surgery before reaching one year of age.

In eight patients replacement of bovine pericardium tube was performed. Such tube was placed in previous surgery, on average 110.5±24.3 months after initial surgery.

After surgery to implant the pulmonary homograft, an epimyocardial dual-chamber pacemaker implantation was performed in five patients due to complete atrioventricular block, four in the immediate postoperative period and one case 25 months after surgical repair.

The pulmonary homograft used in surgeries varied its size from 12 to 26mm, mean 21.5±3.2 mm and a median of 22mm. The Z-score of the pulmonary valve ranged from less than one to five, with a mean of 2.8±1.4 and median of 3. Fifty-seven percent of the homografts had their Z-scores between 0 and plus 3.

The death in the intensive care unit occurred on average 10.5±7.5 days after operation, with a median of 9 days, ranging from 1 to 38 days. The most common cause of death was multiple organ failure (11 cases) and among patients with this diagnosis, five were on peritoneal dialysis and three on hemodialysis. Clinical complications presented by patients during hospital stay in the intensive care unit were right and left ventricular dysfunction, cardiac arrhythmia, pulmonary hypertension, acute renal failure, seizures, pneumonia and septicemia.

Separating the patients by type of heart disease is observed that there are differences between the groups in the variables: age at time of surgery, size of homograft, Z-score value of the pulmonary valve, maintenance of the integrity of the pulmonary homograft, presence of change in the pulmonary tree and cardiopulmonary bypass time (Table 2).

In univariate analysis, in each group of heart disease, none of the variables interfered with hospital mortality.

On patients assessment, without separating by heart disease, multivariate analysis showed CPB time over 120 minutes as the only risk factor for hospital mortality, and 4.5 times higher the chance of death than a patient with cardiopulmonary bypass time less than 120 minutes.

The use of valves and segments of vascular tissue of human origin is an important resource in the surgical treatment of congenital heart diseases and presents good outcomes. From the 80's, the use of pulmonary homograft was widespread due to improvements in preservation of graft.

Few studies have focused on hospital mortality for surgical repair of the obstructive diseases of the right heart, citing only its rate, but rather than assessing the risk factors [5-10]. Late death and dysfunction of the pulmonary homograft were assessed with more emphasis [2,3,5-7,10-12]. In our study, hospital mortality was 18%, in accordance with the literature, on which mortality ranges from 6% to 27% [2.5-10].

In patients with tetralogy of Fallot, pulmonary atresia with interventricular communication and transposition of the great base vessels with interventricular communication and pulmonary stenosis, age at surgical repair was later, by chosing surgery in patients over a year old. The average size of the homograft was higher and the option of the surgeon to maintain the integrity of the homograft, decreasing the size of the leaflets or their replacement by a goretex monocuspid.

Although the option of the surgeon by implantation of pulmonary homograft with the largest possible size, in respect to the patient's body surface, smaller homografts were used in cases of truncus arteriosus, perhaps due to lower age at surgical repair and the smaller size of the thoracic cavity.

Stenosis or hypoplasia of the pulmonary branches and prior reconstructive surgery may be factors of increased mortality because there is prolongation of surgical time and cardiopulmonary bypass, by increasing the occurrence of cardiac dysfunction, intraoperative bleeding and cardiac arrhythmias. However, in our study the aforementioned facts were not considered as a risk factor for death.

The CPB time was not a risk factor for mortality when assessed separately in each heart disease, however, analysis of the entire sample, without separation into groups according to heart disease, it was found that the CPB time over 120 minutes increases the risk of death by 4.5 times.

Consistent with the major cause of death in our patients in the intensive care unit, which was the failure of multiple organs, it is known that prolonged cardiopulmonary bypass time in neonates and children leads to a stronger activation of the inflammatory cascade, causing dysfunction of various organs, increasing the patient's stay in the intensive care unit and his mortality [15].

Surgical intervention or hemodynamics in obstructive heart disease of the right side is indicated soon after diagnosis, to maintain an adequate pulmonary circulation. Reconstructive surgery of the right outflow tract using pulmonary homograft has a hospital mortality of 18%, but any risk factor was found when studied for each heart disease separately. However, prolonged cardiopulmonary bypass time was shown as a risk factor when the whole sample is studied, without separation by heart disease.