Objective: To assess the applicability of the European Rysk System in Cardiac Operations (EuroSCORE) in patients undergoing cardiac valve surgery at the Heart Institute of Pernambuco. Method: 840 patients operated on between 2001 and 2009, who medical records contained all the informations to calculate the EuroSCORE were included in the study. Hospital death was the end-point of the study. In order to assess the applicability of the EuroSCORE it was used the non parametric test of Mann-Whitney. The calibration of the model was measured by comparing the morbidity observed with that expected, using the Hosmer-Lemeshow Test of Goodness of Fit. The accuracy of the model was evaluated by the ROC curve (receiver operating characteristic curve). Results: The comparison of expected and observed mortality, by Hosmer-Lemershow test, showed good predictive capacity (P = 0.767) as well as when compared to each value of addictive EuroSCORE (P = 0,455). The area of ROC curve was 0.731 (IC 95%, 0.660 - 0.793) with P < 0.001. The global predicted mortality was practically identical to that observed (7.9%). The low-risk group (EuroSCORE 0-2) comprised 345 patients with a mortality of 3.19%. The medium-risk group (EuroSCORE 3-5) comprised 364 patients, with a mortality of 7.69% and the high-risk group (EuroSCORE > 6) included 131 patients, with a mortality of 20.6%. The regression logistic analyses allowed to identify the following risk-factors for death: age > 60 years, gender female, previous operation, active endocarditis, associated surgery of the thoracic aorta and extra-cardiac arteriopathy. Conclusion: The EuroSCORE, a simple and objective method, proved to be a satisfactory predictor of operative mortality and risk factors for death in patients submitted to valve cardiac operations in the Heart Institute of Pernambuco.

The European Risk System in Cardiac Operations (EuroSCORE) analyzed 68 preoperative risk factors and 29 operative risk factors, which could be related to hospital death, in a consecutive series of 19.030 adult patients submitted to heart surgery in Europe [1-4]. The relation between the several risk factors and the results was studied statistically by univaried analysis and regression logistic analyses, which allowed to identify 17 real risk-factors and, for each one of them, it was attributed a score. Therefore, it was built a model that permitted to divide the patients in three risk groups: low-risk (score 0-2), medium-risk (score 3-5) and high-risk (score >6).

This method has proven efficient and it has been used in the stratification of surgical risk, especially for having been validated when applied to non-European people [5-7]. Nevertheless, the majority of population studied for the establishment of the EuroSCORE consisted of patients submitted to myocardial revascularization. Less than 30% were cardiac valve patients and, although the score having been adequate, with a good predictor of mortality, there were observed in this group two different aspects of valve cardiac patients operated in developing countries: first, the European patients are older, and second, the predominance in them is degenerative disease, not rheumatic disease, the latter predominant amongst us. This has motivated some to develop specific risk scores for cardiac valve operations among us [8].

This study aims to evaluate the applicability of the EuroSCORE in patients submitted to cardiac valve surgery at the Heart Institute of Pernambuco. The EuroSCORE was chosen for it has already been part of a line of research of our group.

The present work is an observational, transversal study, with data colleted in a retrospective and prospective way by analysis of the patient's report. The sample studied consisted of 840 patients submitted to cardiac valve surgery at the Heart Institute of Pernambuco between January, 2001 and June, 2009, and the reports from these patients contained all the necessary information for the calculation of the EuroSCORE. Hospital death was the end-point of the study. The calculation of the EuroSCORE was performed by the score formula available in the original article [1]. The scores were calculated in their Additive and Logistic forms [4]. In order to compare the EuroSCORE between the patients that died and those who survived, it was applied the non parametric test of Mann-Whitney. In order to evaluate the calibration of the EuroSCORE, it was used the Hosmer-Lemeshow Test of Goodness of Fit [9]. The accuracy of the model was evaluated by the ROC curve (receiver operating characteristic curve), built for sensibility (accurate death prediction) and specificificity (accurate prediction of survival), calculated for each value of each score studied [5].

The area below the ROC curve was used to represent the precision of the predictions. In order to identify, amongst the variables involved in the EuroSCORE calculation, those, which, in our sample, alter the risk of death, we performed a univariate analysis, using the Chi-Square test of Pearson and the Fisher's exact test, when indicated. In order to acquire a global analysis, it was used the Regression Logistic technique. There were included in the regression all the variables that presented P-value < 0.20 in the univaried analysis. The selected variables had their eventual interactions examined in a correlation matrix, being incorporated in the model all the interactions with correlation coefficient ≥ 0.5. The statistical program employed was SPSS (Statistical Package for the Social Sciences) - version 12.0. The level of significance employed was 0.05.

The distinction of the sample according to the variables studied is shown in Table 1, with its relative and absolute frequencies. Table 2 presents the comparison of the sample of the original study of establishment of the EuroSCORE with the sample of our study, in which are evidenced differences of the two populations. After calculation of the EuroSCORE, patients were classified in three risk-groups (low, medium and high), as presented in Table 3. 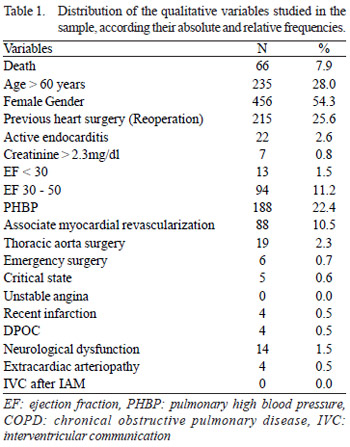 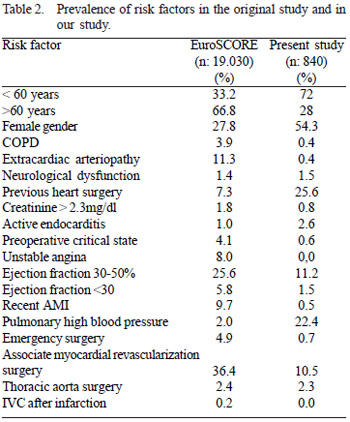 The variance either in the Additive model as in the Logistic one was shown through their means, medians and standard deviation, according Table 4.

When comparing the means of the EuroSCORE between survivors and non survivors, it was detected that the score mean was higher for those who died, either in the Additive model as in the Logistic one, as shown in Tables 5 and 6.

The comparison between predicted mortality and observed mortality, by the Hosmer-Lemeshow Test of Goodness of Fit, for the three risk groups, evidenced a very good predictive capacity (P=0.767), as when compared to each value of the EuroSCORE Additive (P=0.455), as observed in Tables 7 and 8. 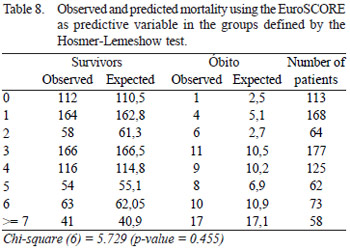 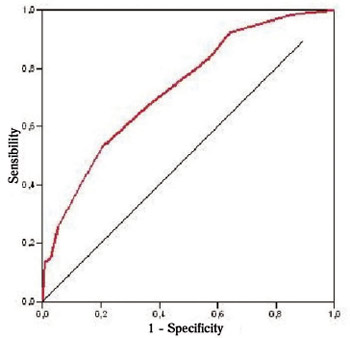 Fig. 1 - Graphic of the ROC curve. Result of the univariate analysis

Result of the univariate analysis

Aiming to identify amongst the variables involved in the calculation of the EuroSCORE, the main factors (variables) that alter the risk of death, we performed in our sample a univariate analysis. Table 9 reveals the results of this analysis for the variables studied, which consist of: number of patients in each category, the percentile of death in each subgroup, odds ratio and its respective certainty interval of 95%. 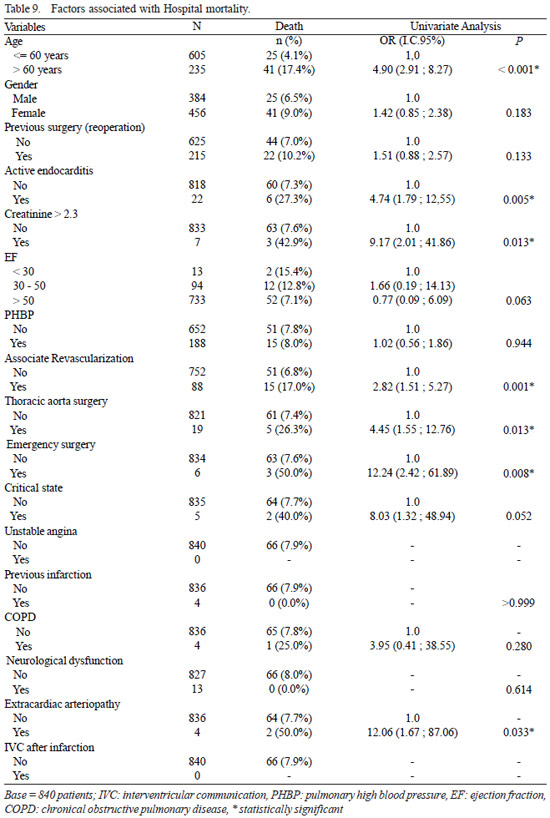 Result of the multivariate analysis

The stratification of the surgical risk allows estimating the operative risk to be confronted by the patient and also to evaluate the results and, in the end, the quality of assistance of a certain institution [10]. Amongst a range of score systems developed, the EuroSCORE has had large acceptance worldwide. The EuroSCORE is an additive system which each one of the 17 risk factors receives a score, that, when summed up, supplies a score that allows classifying a certain patient in one of the three risk groups: low-risk (score 0-2), medium-risk (score 3-5) and high-risk (score > 6). After publishing the original work [1], several centers started adopting the EuroSCORE [11-14], but some discrepant results appeared between the expected mortality and the observed mortality, especially in high-risk patients. In order to solve this problem, Nashef et al. [4] started conceding the value of a logarithmic function to each one of the variables, which made possible, at the end of the calculation, to attribute a value of death risk percentage. This procedure is known as logistic EuroSCORE.

In a previous publication [7], our group showed that the EuroSCORE was a simple and objective method, revealing to be a satisfactory predictor of surgical mortality in patients submitted to coronary artery bypass graft surgery. However, for obvious reasons, this finding could not be extended to patients submitted to cardiac valve surgery without a specific study on this group of patients, due to the prevalence of rheumatic disease. In fact, the group of 840 patients holding valvopathies that participated in this study differs largely from the population studied in the original research of the EuroSCORE, as it can be analyzed in Table 1: our patients were much younger, with higher number of previous surgeries and higher incidence of pulmonary hypertension and active endocarditis. On the other hand, as expected, there was lower prevalence of ventricular dysfunction and events related to coronary disease (recent infarction, unstable angina). Despite these differences, it was observed that the model adjusted well, with an area under the ROC curve of 0.731 (P<0.001) similar to the result of the evaluation of the EuroSCORE in America for patients holding valve lesions [5]. Also similar to the validation in patients submitted to myocardial revascularization [7] and the application of the very original study in patients holding valvopathies [3].

Differently from another study performed in our area [14] that aimed to validate the EuroSCORE in patients holding valvopathies, there was a higher prevalence, in our group, of medium and low-risk patients.

The mean of the EuroSCORE, either Additive or Logistic, among the patients that died, was higher than the mean of survivors, which confirms higher risk of death among the high-risk patients and lower probability of death in the groups of medium and low risk, as it had already been observed by others [13]. The global mortality rate in our series was 7.9%, similar to that related by others [8].

The model also presented a good predictive value for either predicted mortality and observed mortality in the three groups of risk (P=0.767) or for each value of the Additive EuroSCORE (P=0.455).

The multivariate analysis showed that age over 60 years is a risk factor, which is in agreement with the literature [15-17], especially when the cardiac valve surgery is associated to myocardial revascularization [18,19] or is a case of reoperation [17,20].

The female gender also showed to be a risk factor. It has also been reported that this fact is true when it comes to cases of change of aortic valve. We have observed a sheer correlation between age and gender, as attested in our material, more than 50% of death occurred in female patients over 60 years.

Previous heart surgery has been related as a risk factor for cardiac valve surgery [22-24], which was confirmed in our study. A critic that could be formulated to the EuroSCORE is the fact that number of previous surgeries is not taken into account, which is widely known to have influence in the surgical risk [25].

In spite of the relatively low prevalence in our sample, it was also possible by means of multivariate analysis, to show that not only active endocarditis, either in native valve or prosthesis, but also surgery associated to thoracic aorta, emergency surgery and extratracardiac arteryopathy are factors of major surgical risk.

In conclusion, the EuroSCORE proved to be a simple and objective indicator, revealing to be a satisfactory surgical mortality predictor in patients submitted to cardiac valve surgery at the Heart Institute of Pernambuco. The variables involved in higher surgical risk include age over 60 years, female gender, previous heart surgery, active endocarditis, emergency surgery, surgery associated to the thoracic aorta and extracardiac arteryopathy.