Introduction: The benefit of total arterial revascularization (TAR) in coronary artery bypass grafting (CABG) remains a controversial issue. This study sought to evaluate whether there is any difference on the long-term results of TAR and non-TAR CABG patients.
Methods: The Medical Literature Analysis and Retrieval System Online (MEDLINE), Excerpta Medica dataBASE (EMBASE), Cochrane Central Register of Controlled Trials (CENTRAL/CCTR), Clinical Trials.gov, Scientific Electronic Library Online (SciELO), Literatura Latino-Americana e do Caribe em Ciências da Saúde (LILACS), and Google Scholar databases were searched for studies published by October 2020. Randomized clinical trials and observational studies with propensity score matching comparing TAR versus non-TAR CABG were included. Random-effects meta-analysis was performed. The current barriers to implementation of TAR in clinical practice and measures that can be used to optimize outcomes were reviewed.
Results: Fourteen publications (from 2012 to 2020) involving a total of 22,746 patients (TAR: 8,941 patients; non-TAR: 13,805 patients) were included. The pooled hazard ratio (HR) for long-term mortality (over 10 years) was lower in the TAR group than in the non-TAR group (random effect model: HR 0.676, 95% confidence interval 0.586-0.779, P<0.001). There was evidence of low heterogeneity of treatment effect among the studies for mortality, and none of the studies had a particular impact on the summary result. The result was not influenced by age, sex, or comorbidities. We identified low risk of publication bias related to this outcome.
Conclusion: This review found that TAR presents the best long-term results in patients who undergo CABG. Given that many patients are likely to benefit from TAR, its use should be encouraged.

Coronary artery bypass grafting (CABG) is one of the most commonly performed surgical operations worldwide and is currently considered as the revascularization strategy of choice for multivessel coronary artery disease[1]. However, optimal graft selection has been an important matter of debate. More specifically, graft failure considerably influences outcomes of CABG as it is associated with recurrent angina, poor survival, and need for reoperation[2].

We set out to conduct a meta-analysis investigating long-term mortality (over 10 years) of TAR when compared to non-TAR. We followed the Preferred Reporting Items for Systematic Reviews and Meta-analyses (PRISMA) guidelines.

The following steps were taken: (1) identification of titles of records through databases searching, (2) removal of duplicates, (3) screening and selection of abstracts, (4) assessment for eligibility through full-text articles, and (5) final inclusion in the study. Studies were selected by two independent reviewers. When concordance was absent, a third reviewer took the decision to include or exclude the study.

The primary endpoint was long-term mortality (at least a 10-year follow-up). Two independent reviewers extracted the data. When concordance was absent, a third reviewer checked them and took the final decision. From each study, we extracted patient characteristics, study design, and outcomes.

Pooled hazard ratio (HR) with 95% confidence interval (CI) and P-values for death were calculated. Forest plots were created to represent the primary outcome. Chi-square test and I2 test were performed for assessment of statistical heterogeneity[10]. The HR were combined across the studies using a weighted DerSimonian-Laird random effects model[11]. Funnel plots represent the analysis of publication bias, statistically analyzed by Begg and Mazumdar's test[12] and Egger's test[13].

The influence of a single study on the overall effect of TAR on the main outcome was assessed by sequentially removing one study (the "leave-one-out" method). This sensitivity analysis was carried out to test the consistency of these results in order to investigate if individual studies had an excessive impact on the results.

Meta-regression analyses were performed to determine whether the effects of TAR were modulated by pre-specified factors. Meta-regression graphs describe the effect of off-pump CABG on the outcome (plotted as a log HR on the y-axis) as a function of a given factor (plotted as a mean or proportion of that factor on the x-axis). Meta-regression coefficients show the estimated increase in log HR per unit increase in the covariate. Since log HR > 0 corresponds to HR > 1 and log HR < 0 corresponds to HR < 1, a negative coefficient would indicate that as a given factor increases, the HR decreases.

A total of 2,473 citations were identified, of which 57 studies were potentially relevant and retrieved as full-text. Fourteen publications[9,14-26] fulfilled our eligibility criteria. Interobserver reliability of study relevance was excellent (Kappa=0.86). The PRISMA Flow Chart is presented in Figure 1. 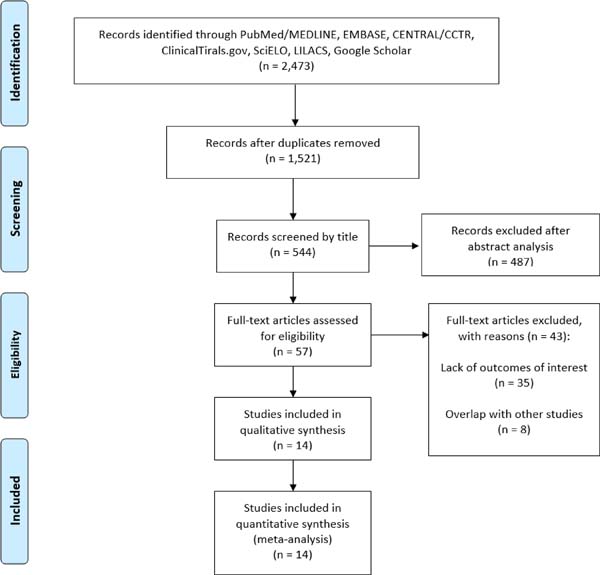 Detailed characteristics of the studies and their populations are listed in Table 1. A total of 22,746 patients (TAR: 8,941 patients; non-TAR: 13,805 patients) were included from studies published from 2012 to 2020. The studies consisted of patients whose mean age was around 65 years and who were most often male. One study was a post-hoc analysis of a randomized controlled trial, one study was prospective, and four were multicenter. All the observational studies had propensity-score matched groups.

Table 1 - Characteristics of the studies and populations.

Table 1 - Characteristics of the studies and populations.

The HR for mortality in the TAR group compared with the non-TAR group for each study is reported in Figure 2. There was evidence of low heterogeneity (I2=32%, P=0.117) of treatment effect among the studies for mortality. We observed lower rates of mortality in the TAR group (random effect model: HR 0.676, 95% CI 0.586-0.779; P<0.001). Funnel plot analysis disclosed no asymmetry around the axis for the outcome, suggesting low risk of publication bias related to this outcome (Figure 3). 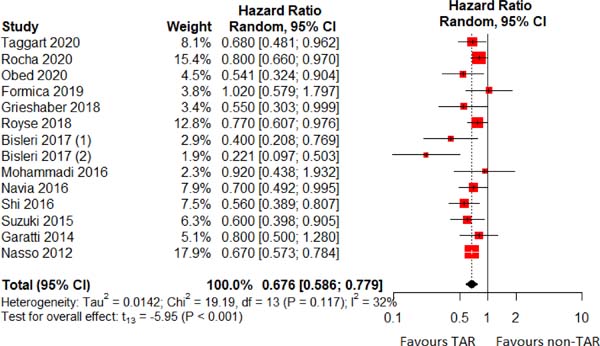 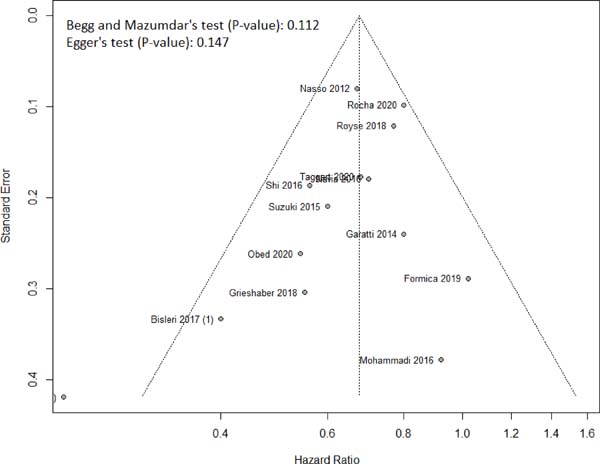 Sensitivity analyses performed by removing each single study from the meta-analysis (in order to determine the influence of individual data sets on the pooled HRs) showed that none of the studies had a particular impact on the summary results of mortality (Figure 4). 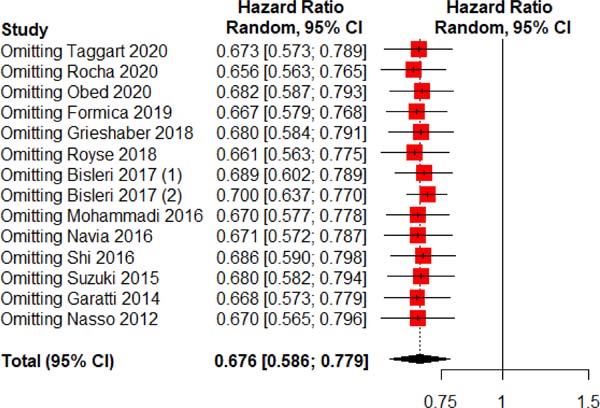 None of the predetermined modulating factors showed any correlation with the studied outcomes, suggesting that the results were not influenced by any of these factors.

To the best of our knowledge, this is the largest meta-analysis of randomized controlled trials and propensity-matched observational studies performed to date that investigated long-term mortality of TAR versus non-TAR. Our findings provide additional value by demonstrating that, after a follow-up of over 10 years, patients undergoing CABG surgery with TAR had lower risk of mortality compared to those undergoing non-TAR CABG.

Surgical treatment of patients with multivessel coronary artery disease has made important progress in the last decades. Since it has become accepted that complete revascularization provides a benefit compared to incomplete revascularization[2], several techniques have been developed. One option is to use SIMA and complete the revascularization using SVG. However, given the threefold higher risk of graft failure with venous compared to of arterial conduits[27], this strategy might be hampered by recurrent angina, poor survival, and need for reoperation. Another option, which has increasingly gained attention, is to complete the revascularization using arterial conduits uniquely by means of BIMA and/or RA grafts. Nonetheless, TAR largely remains ignored. In the United States of America, multi-arterial CABG constitutes only 10% of CABG done using ≥ 2 arterial grafts, and < 1% with three arterial grafts[28]. Clearly, several challenges remain.

One of the reasons of concern about TAR is the use of the RA. It is prone to vasospasm, technically more challenging, and carries the risk of radial nerve injuries, refraining surgeons from adopting it as a conduit[29,30]. Yet, besides its superior patency rates over venous grafts[31-33], several characteristics qualify RA as an adequate conduit for CABG: its resistance to atherosclerosis, accommodation to arterial pressure, possibility of parallel LIMA harvesting, caliber size and length, and the considerable muscular wall enabling easy handling[34].

As demonstrated in our meta-analysis, TAR had a significant survival benefit on a long-term follow-up of over 10 years after CABG. In the above, we discussed some of the barriers that are currently still hindering wide implementation of TAR into the cardiac surgical landscape. We also showed how these can be addressed, thereby optimizing the benefits of TAR while minimizing the risk for its potential complications. It has to be noted that there will remain scenarios were vein grafts will still be needed or even preferable above arterial grafts, such as in patients with expected short survival, variant anatomy, or as a bailout in case of arterial graft failure. However, these specific scenarios will only make up a minority of CABG cases. The 90% of patients currently receiving only a single graft in the United States of America is therefore largely out of proportion. Given the findings of our meta-analysis, several of these patients might benefit from TAR.

Role of RA in TAR

The Radial Artery Patency and Clinical Outcomes (or RAPCO) trials[39] found that the 10-year patency rate of the RA was significantly better than that of the free right internal thoracic artery, and higher than that of the saphenous vein, although this latter difference was not statistically significant. Obed et al.[15] demonstrated that using the RA and the left IMA as T-graft is associated with a significant long-term survival benefit in patients undergoing CABG and it might be a promising alternative to conventional use of a SIMA supplemented by SVG. Furthermore, Carneiro et al.[40] demonstrated that the site of proximal anastomosis of the RA (either onto the aorta or as Y composite grafts) does not interfere in mid- and long-term graft occlusion and patency rates.

Risk of Bias and Limitations

Since studies with statistically significant results are more likely to be accepted for publication in medical journals in comparison with those with null or non-significant results, there is always the risk of publication bias. Nevertheless, the impact of TAR on the outcomes in our meta-analysis has low probability of being under the influence of publication bias according to the statistical analyses. Only one of the included studies was a randomized controlled trial, for which we tried to compensate with the inclusion of observational studies with matched populations.

This systematic review with meta-analysis found that TAR presents the best long-term results in patients who undergo CABG surgery. Given that many patients are likely to benefit from TAR, our findings encourage the use of TAR in a larger group of patients than is currently being performed.

SCR Substantial contributions to the conception of the work; and the analysis of data for the work; drafting the work and revising it critically for important intellectual content; final approval of the version to be published

JVDE Substantial contributions to the conception and design of the work; and the analysis of data for the work; drafting the work and revising it critically for important intellectual content; final approval of the version to be published

LRPC Substantial contributions to the conception of the work; and the analysis of data for the work; drafting the work and revising it critically for important intellectual content; final approval of the version to be published

ACEN Substantial contributions to the conception of the work; revising it critically for important intellectual content; final approval of the version to be published

AAR Substantial contributions to the conception of the work; revising it critically for important intellectual content; final approval of the version to be published

AA Substantial contributions to the conception of the work; revising it critically for important intellectual content; final approval of the version to be published

WBF Substantial contributions to the conception of the work; revising it critically for important intellectual content; final approval of the version to be published

AR Substantial contributions to the conception of the work; revising it critically for important intellectual content; final approval of the version to be published

KZ Substantial contributions to the conception of the work; revising it critically for important intellectual content; final approval of the version to be published

AW Substantial contributions to the conception of the work; revising it critically for important intellectual content; final approval of the version to be published

DCSF Substantial contributions to the conception of the work; revising it critically for important intellectual content; final approval of the version to be published

MPBOS Substantial contributions to the conception and design of the work; and the analysis of data for the work; drafting the work and revising it critically for important intellectual content; final approval of the version to be published