Objective: To evaluate the prognostic value of CHA2DS2-VASc score in individuals undergoing isolated coronary artery bypass grafting (CABG) surgery.
Methods: Records of consecutive 464 patients who underwent elective isolated CABG, between January 2015 and August 2017, were retrospectively reviewed. A major adverse cardiac event (MACE) was the primary outcome of this study. MACE in patients with low (L) (<2, n: 238) and high (H) (≤2, n: 226) CHA2DS2-VASc scores were compared. Univariate logistic regression analysis identified preditors of MACE.
Results: Hypertension, diabetes mellitus, and peripheral vascular disease were more frequent in the H group than in the L group. European System for Cardiac Operative Risk Evaluation (EuroSCORE) I and SYNTAX I scores were similar in both groups while SYNTAX II-CABG score was significantly higher in the H group than in the L group. Postoperative myocardial infarction, need for intra-aortic balloon pump, acute renal failure, and mediastinitis were more frequent in the H group than in the L group. The H group had significantly higher in-hospital mortality and MACE rates than the L group (P<0.01). EuroSCORE I, SYNTAX II-CABG, and CHA2DS2-VASc scores were predictors for MACE. SYNTAX II-CABG > 25.1 had 68.4% sensitivity and 52.7% specificity (area under the curve [AUC]: 0.653, P=0.04, 95% confidence interval [CI]: 0.607-0.696) and CHA2DS2-VASc > 2 had 52.6% sensitivity and 84.1% specificity (AUC: 0.752, P<0.01, 95% CI: 0.710-0.790) to predict MACE. Pairwise comparison of receiver-operating characteristic curves revealed similar accuracy for both scoring systems.
Conclusion: CHA2DS2-VASc score may predict MACE in patients undergoing isolated CABG.

The European System for Cardiac Operative Risk Evaluation (EuroSCORE) and the Society of Thoracic Surgeons (STS) 2008 Cardiac Surgery Risk Model are the most commonly used risk prediction models for cardiac surgery. These scoring systems are not only useful to assess the effect of specific clinical parameters on surgical outcomes, but also to aid in treatment selection, patient counseling, comparison of postoperative results, and quality improvement[3]. Besides, current mortality risk prediction models for CABG do not have a standardized approach in terms of both defining predictor variables and outcome. In addition, some problematic topics such as inadequate sample size, inappropriate handling of missing data, as well as suboptimal statistical techniques make these risk models debatable[4]. Need for calculator or computer make these models impractical for daily clinical use. Therefore, more practical risk modeling systems which predict morbidity and mortality are required.

This study included patients who underwent isolated CABG at the Haseki Training and Research Hospital between January 2015 and August 2017. The study excluded patients with concomitant other surgeries such as valve repair or replacement. Patients with preoperative AF were also excluded. Emergent procedures were excluded since preoperative assessments, such as carotid ultrasound, were insufficient. Records of 555 patients were retrospectively reviewed. Of these, 22 (3.9%) patients had an insufficient record, 14 (2.5%) underwent off-pump surgery, and 23 (4.1%) underwent concomitant other cardiac surgery (valvular, ventricular aneurysms, acquired ventricular septal defect). Additional 32 (5.8%) patients who underwent emergent surgery were excluded from the study. All patients were operated by the same group of cardiovascular surgeons and anesthesiologists. Same techniques during CABG and myocardial protection were used.

The angiograms of the patients were evaluated by two experienced interventional cardiologists who were blind to the study. CAD was defined as a stenosis of more than 50% of the lumen diameter in any of the main coronary arteries. SYNTAX I-II scores were calculated by using the downloaded version (www.syntaxscore.com).

Preoperative risk stratification was performed for all patients by using the downloaded version of the EuroSCORE system (euroscore.org).

CHA2DS2-VASc score was calculated for all patients by assigning one point for each of the following criteria: age 65-75 years, hypertension, DM, congestive heart failure or left ventricular ejection fraction (LVEF) < 40%, female sex, and vascular disease (defined as prior MI, complex aortic plaque, carotid disease, peripheral artery disease including intermittent claudication, and previous surgical or percutaneous intervention for abdominal aorta or vessels of upper or lower extremities). Two points were assigned for a history of stroke or transient ischemic attack or thromboembolism and age ≥ 75 years. Since all patients underwent coronary bypass surgery due to multiple CAD, CAD at index hospitalization was not taken into account. After the CHA2DS2-VASc score calculation, the study population was divided into two groups: low (L) (CHA2DS2-VASc <2 ) and high (H) (CHA2DS2-VASc ≥ 2) score groups.

A major adverse cardiac event (MACE) was the primary endpoint of this study. MACE was defined as a composite of in-hospital mortality, postoperative non-fatal MI, cardiac arrest requiring cardiopulmonary resuscitation, need for new mechanical circulatory support, and cerebrovascular event during intraoperative/postoperative hospitalization. In-hospital mortality was defined as death from all causes during intraoperative and postoperative hospitalization. The study was approved by the local ethics committee.

Statistical analyses were performed with Statistical Package for the Social Sciences (SPSS) software version 22.0 (IBM Corp. Armonk, New York, United States of America) and MedCalc bvba version 16 (Seoul, Korea). Normality of the data was analyzed with the Kolmogorov-Smirnov test. Continuous data were expressed as mean ± standard deviation (SD) and categorical data were expressed as percentages. Categorical variables between the groups were assessed with Chi-square test or Fisher’s exact test, whichever was suitable. Logistic regression analysis was used to identify the independent predictors of MACE. Differences between patient subgroups were tested using Mann-Whitney U test or Student's t-test, where appropriate. A P-value < 0.05 was considered statistically significant. Receiver-operating characteristic (ROC) curve graphics were used to determine the cut-off values of predictors for MACE.

Table 1 - Demographic, clinical, and laboratory characteristics of the groups.

Table 2 - Operative and postoperative parameters of the groups.

Table 3 - Logistic regression of each CHA2DS2-Vasc score component for MACE.

Table 3 - Logistic regression of each CHA2DS2-Vasc score component for MACE. 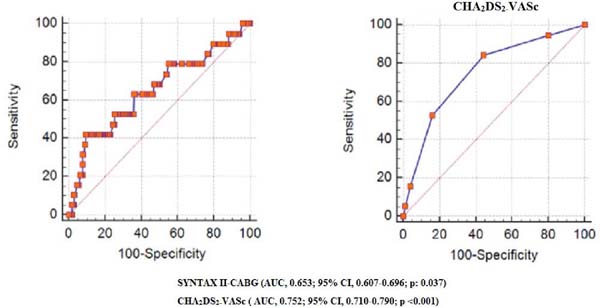 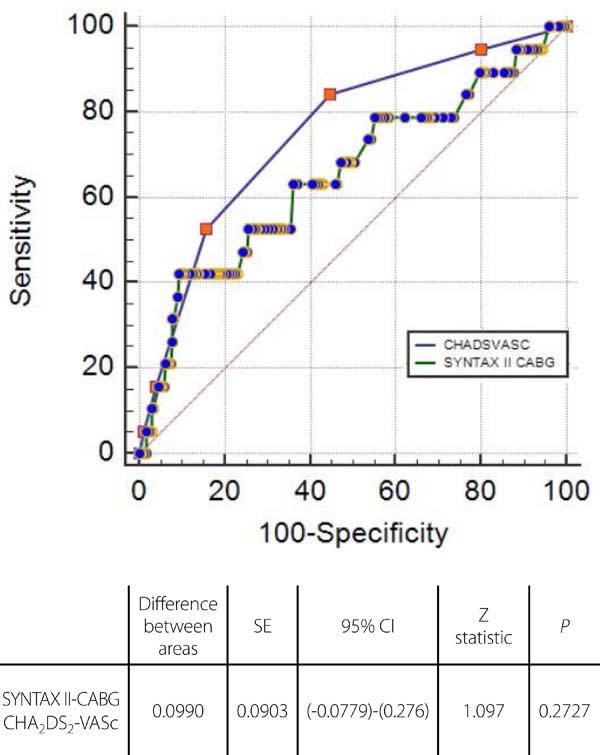 We demonstrated, for the first time, that CHA2DS2-VASc score is an independent predictor for MACE in patients undergoing isolated CABG. Although CHA2DS2-VASc score includes only clinical parameters, it is as accurate as SYNTAX II-CABG, which includes a detailed angiographic evaluation.

CABG is a safe procedure with low rates of mortality and morbidity. However, the ability to accurately predict adverse outcomes and short- and long-term mortalities after CABG is an important issue that may allow planning preventive strategies and minimize complications[8]. EuroSCORE, STS risk calculator, and Parsonnet score are the most commonly used risk stratification models which include multiple variables, requiring online calculators for estimation of risk-related mortality and morbidity with CABG[9]. Nevertheless, these are complex and impractical tools to use at the bedside. Therefore, we still need models to quickly and easily predict risk at bedside, without the need for computational software. In practice, the bedside risk assessment not only provides the surgeon an objective, measurable risk profile to identify patients who require meticulous care, but it also provides the patients a more detailed knowledge of the risk related with the surgical procedure[10].

CHA2DS2-VASc score is an easily applicable time-saving risk model which predicts the risk of thromboembolic events in patients with non-valvular AF in daily practice. CHA2DS2-VASc score components, such as older age, female gender, hypertension, DM, extracardiac arteriopathy, low LVEF, and preoperative stroke, and the presence of CAD were reported as predictors of early outcomes after CABG[11].

The female sex has been reported as an independent predictor of short- and long-term mortalities and adverse events after CABG[12]. Although the female sex is included in both STS and EuroSCORE, evidence is controversial. Several studies concluded that the female sex is not a risk factor for post procedural mortality after CABG[13]. In our study, the female sex was not found to be associated with MACE, which is compatible with previous studies.

Increased age (> 60 years) has been reported as an independent predictor of mortality and adverse events after CABG[14]. In the EuroSCORE model, 60 years of age was accepted as a cut-off value, thus one point was assigned per each five years above 60 years. In the CHA2DS2-VASc score, one point was assigned for 65-75 of age years and two points were assigned for age ≥ 75 years. Compatible with previous studies, our study demonstrated an association between age and MACE[14].

Heart transplantation (HT) and DM are not included in the EuroSCORE risk model. On the other hand, HT, DM, and age were the predominant variables causing high scores in our study. Age and HT were independent predictors for MACE in the present study. Although several studies revealed that patients with DM are at high risk for MACE and death after CABG, univariate analysis revealed that DM was not an independent predictor for MACE in the present study, like studies by Rajakaruna et al.[15]. These conflicting data may be related to defining the criteria of DM. DM was defined as the need for insulin or oral medication in the present study, while another study defined DM as the need for diet, oral medication, or insulin therapy[16]. Patients with insulin-dependent DM have a significantly higher rate of mortality and MACE than those with non-insulin-dependent DM[17]. We also did not classify DM as insulin-dependent or non-dependent. These might explain the different outcome associated with diabetes on early mortality in the present study.

Although there is conflicting data in the literature, we showed that preexisting HT is a poor predictor for patients undergoing isolated CABG[18]. CABG has been shown to be superior to medical therapy alone in patients with preoperative low LVEF[19]. Besides, Dalen et al. showed that the reduced ejection fraction doubled the risk of early postoperative death[20]. Compatible with the previous studies, patients with left ventricular systolic dysfunction and symptoms of heart failure had significantly high in-hospital mortality and morbidity in our study[9].

Similar to our study, numerous studies have demonstrated that the PVD was an independent predictor of early mortality and poor short-term outcome after CABG[21]. On the other hand, the association between PVD and early mortality was not confirmed in some studies[22].

Consequently, when we performed univariate analysis of each CHA2DS2-VASc score component, congestive heart failure or ejection fraction < 40%, age, hypertension, cerebrovascular accident, and PVD were significantly associated with MACE in patients undergoing after isolated CABG, whereas DM and sex were not.

Several studies have demonstrated an association between the CHA2DS2-VASc score and increased mortality and non-fatal adverse cardiovascular outcomes in different clinical conditions, regardless of the presence of AF[24]. Recently, Hamid et al. observed high mortality in the patients undergoing transcatheter aortic valve replacement who had CHA2DS2-VASc score > 6. Therefore CHA2DS2-VASc score was proposed as a simple tool for the identification of high-risk patients for short-term and mid-term mortalities in patients undergoing transcatheter aortic valve replacement (TAVR)[25].

We showed that CHA2DS2-VASc score may predict in-hospital mortality and MACE in patients undergoing isolated CABG in our study population. CHA2DS2-VASc score is a handy risk stratification score and easily appliable at bedside without any computational software. Further studies are required to assess the validity of our findings in larger populations.

MK Substantial contributions to the conception or design of the work; or the acquisition, analysis, or interpretation of data for the work; final approval of the version to be published.

SO Substantial contributions to the conception or design of the work; or the acquisition, analysis, or interpretation of data for the work; final approval of the version to be published.

MZ Substantial contributions to the conception or design of the work; or the acquisition, analysis, or interpretation of data for the work; final approval of the version to be published.