In certain cases, even the extraction of all lead material from vascular space does not result in sufficient vascular recanalization. Sometimes, the use of an oversized powered extraction tool might help to create a larger canal through the SVC. However, in cases of long-segment venous stenosis, a high risk for recurrent venous occlusion is given, especially when a re-implantation of leads is necessary. In those patients, a venous angioplasty might be helpful, to allow for free drainage of the venous blood through the SVC, thereby resolving symptoms associated with venous stasis[3]. The BOB (Spectranetics Corporation, Phillips Medical), is a newly designed, compliant balloon, intended for venous occlusion in case of SVC laceration during TLE[4]. However, due to its mechanical properties and specific design for use in the venous system, it might be suitable for venous angioplasty. The device is a compliant, low-pressure balloon. According to its compliance, the risk for venous tear or rupture might be reduced, compared to a rigid high pressure angioplasty balloon. We here report the first case of angioplasty using the BOB during lead extraction.

An 86-years old male patient was implanted with a right-sided DDD-pacemaker due to Sick sinus syndrome in 2000 and received a device exchange and new implantation of a RV lead in 2007.

The patient was treated in a hybrid operating room using general anesthesia with cardiopulmonary bypass circuit standby. The RA and RV leads implanted in 2000 were extracted without difficulties using a 14 Fr. 80 Hz Laser sheath including outer sheaths. Afterwards, a venography was performed, showing only a narrow venous recanalization, carrying a high risk for subsequent re-occlusion.

For this purpose, a super stiff wire has been placed into the 14 Fr. Glide light laser sheath. The wire was then subsequently snared and externalized through the right femoral vein. The wire served as a rail for fluoroscopic guided introduction of the BOB.

The balloon was inflated three times at upper, middle and lower SVC level with subsequent volumes of 40ml, 50ml and 60 ml of 20/80 contrast agent/saline mixture.

The following venography confirmed an unimpeded drainage of the contrast medium through the SVC to the right atrium (Figure 2). 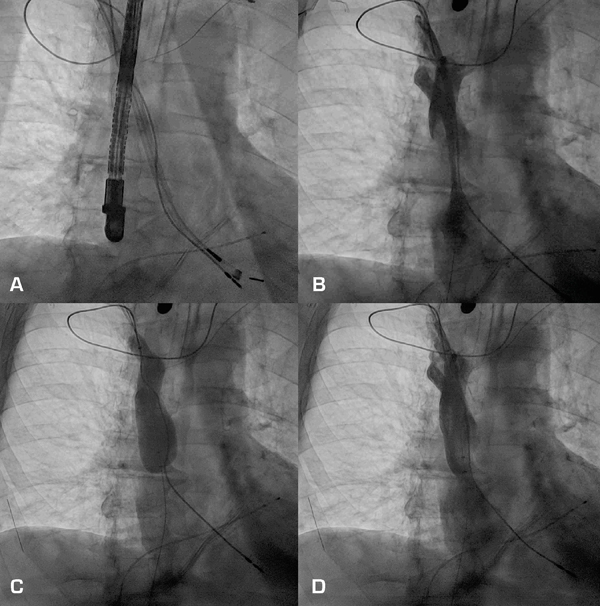 The patient was extubated in the OR and went back to regular ward. No clinically significant pulmonary embolism or hemodynamic compromise was observed. The further postoperative course was uneventful, the patient had no further jugular swelling or headache and was discharged without any complications. In the 6-month follow-up period, the patient was doing clinically well without signs of jugular swelling, dizziness or headache.

In this case, we have shown for the first time, that the BOB can be successfully used for venous angioplasty.

In case of long-segment venous stenosis, a high risk for recurrence of venous occlusion is given, especially when a re-implantation of leads is necessary. Here, a lead extraction with a powered extraction tool is often not enough, to prevent the patient from recurrent venous stenosis. In those cases, a venous angioplasty might be helpful to resolve the venous stenosis. In some cases, even an angioplasty alone might not be sufficient, especially in the long-term run and some kind of SVC stenting might be necessary[3].

The Bridge occlusion balloon is a newly designed, compliant balloon, that is intended for venous occlusion in cases of SVC laceration during TLE[4-6]. Due to its properties and specific design for the use in the venous system, it might be suitable for venous angioplasty. The device is a compliant, low-pressure balloon and could thereby, minimize the risk for venous tear or rupture, in comparison to a rigid angioplasty balloon. SVC rupture during angioplasty is a rare, but severe complication. Some cases of SVC rupture following angioplasty, have been described in literature, with fatal outcomes, including death. Therefore, the use of a compliant balloon might be favorable to reduce the risk of SVC rupture.

Furthermore, the Bridge occlusion balloon can be prophylactically used in high-risk TLE cases[5,6]. Its prophylactic use has been shown to be safe in short and long-term run. Especially, in cases with SVC stenosis, the BOB might be used as a combination of a safety-net in case of SVC perforation and for SVC angioplasty. Although, there is a high rate of subsequent re-stenosis after venous angioplasty reported in literature[3], the patient had no symptoms of venous stasis in the 6-month follow-up period and was doing clinically well. The fact that the patient was on phenprocoumon due to its atrial fibrillation, might have helped to prevent from re-stenosis. No clear evidence on postoperative anticoagulation after venous angioplasty was found. However, a certain time of anticoagulation treatment seems to be reasonable, to prevent from immediate re-stenosis. Type and timing of anticoagulation needs to be further investigated in larger studies.

SP Conception of the study, manuscript writing; final approval of the version to be published

LC Manuscript writing; final approval of the version to be published

NG Revising and drafting of the manuscript; final approval of the version to be published

GA Acquisition of data, analysis of data and figures; final approval of the version to be published

SH Conception of the study, manuscript writing; final approval of the version to be published