Objective: The purpose of this study was to compare the operative mortality rate and outcomes of endovascular aneurysm repair (EVAR) between young and geriatric people in a single center.
Methods: Eighty-five patients with abdominal aortic aneurysms who underwent EVAR between January 2012 and September 2016 were included. Outcomes were compared between two groups: the young (aged < 65 years) and the geriatric (aged ≥ 65 years). The primary study outcome was technical success; the secondary endpoints were mortality and secondary interventions. The mean follow-up time was 36 months (3-60 months).
Results: The study included 72 males and 13 females with a mean age of 71.08±8.6 years (range 49-85 years). Of the 85 patients analyzed, 18 (21.2%) were under 65 years old and 67 patients (78.8%) were over 65 years old. There was no statistically significant correlation between chronic disease and age. We found no statistically significant difference between aneurysm diameter, neck angle, neck length, or right and left iliac angles. The secondary intervention rate was 7% (six patients). The conversion to open surgery was necessary for only one patient and only three deaths were reported (3.5%). There was no statistically significant difference in the mortality and reintervention rates between the age groups. The three deaths occurred only in the geriatric group and two died secondary to rupture. Kidney failure was observed in three patients in the geriatric group (4.5%).
Conclusion: Our single-center experience shows that EVAR can be used safely in both young and geriatric patients.

Although aneurysms can occur anywhere in the arterial system, approximately 80% of them occur in the abdominal aorta. Therefore, endovascular aortic repair is most commonly performed to treat infrarenal abdominal aortic aneurysms (AAAs)[1].

AAA is associated with rupture and is managed via either open surgery repair (OSR) or endovascular aneurysm repair (EVAR). EVAR has become the first-choice treatment for anatomically-suitable AAAs[2].

Advanced age, male sex, and clinical comorbidities, such as cardiac, renal, or pulmonary impairment, are associated with survival after AAA repair[3].

The aim of this study is to share the rates of complications, secondary interventions, survival, and mortality after EVAR and to compare the outcomes of young and geriatric groups after EVAR in a single-center, retrospective study.

Patients that underwent primary EVAR for infrarenal AAA at a single institution were evaluated retrospectively.

The patients were divided into two groups according to their age: young (aged < 65 years) and geriatric (aged ≥ 65 years). An informed consent form about the endovascular treatment was obtained from all patients. The study was retrospective and did not require the approval of the local ethics committee. Table 1 shows the characteristics of the AAA patients that were included in this study. Figure 1 shows the descriptive properties of people in this study. And Table 2 shows the patients’ averages in terms of age, aneurysm diameter, neck angle, neck length, right iliac angle, and left iliac angle. 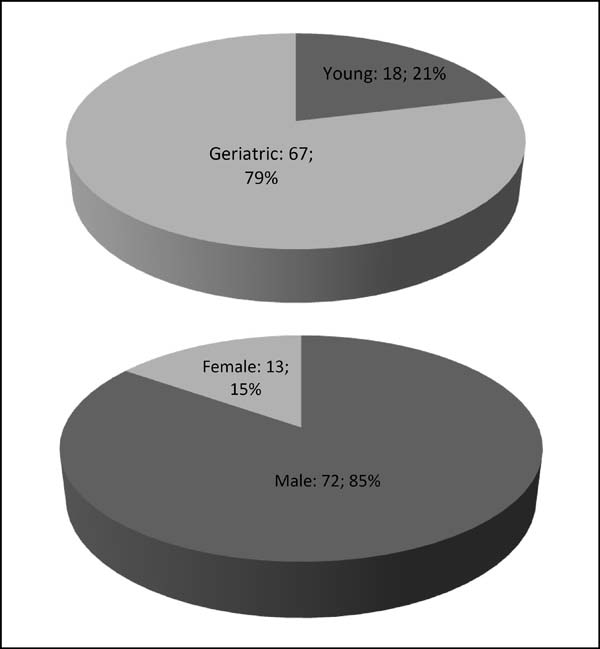 EVAR was performed under general anesthesia in 20 patients and under spinal anesthesia in 65 patients. In all patients, both femoral arteries were surgically removed, and stent grafts were placed after a bolus of heparin was administered at 100 IU/kg.

After the stent graft was placed, control aortography was performed to evaluate graft clearance and possible leakage. The following devices were used in EVAR in this study: EndurentTM (Medtronic) in 70 patients (82.3%), AnacondaTM in six (7%), OvationTM in three (3.5%), AorfixTM in one (1.1%), and others in five (5.8%). The evaluated outcomes included in-hospital mortality, complications, and reintervention. The primary study outcome was technical success; the secondary endpoints were mortality and secondary intervention. Technical success was defined as the successful delivery and application of the endograft without intentionally involving the renal, internal iliac, or visceral arteries.

The data obtained in the study were analyzed using the Statistical Package for Social Sciences software for Windows, version 22.0 (SPSS, Chicago, IL). The following descriptive statistics were used: number, percentage, mean, and standard deviation. The relationships between group variables were tested by chi-squared analysis. Student’s t-test was used to compare the quantitative continuous data between the two independent groups. The findings were evaluated at a 95% confidence interval and 5% significance level. Statistical significance was set at a P-value of < 0.05.

Three deaths were reported in the geriatric group on the first day, two of which were due to rupture and the third was due to kidney failure two days after the operation. The resulting mortality rate was 3.5% (3/85). Endoleaks were detected in 25 (29.4%) patients during the procedure (Figure 2). 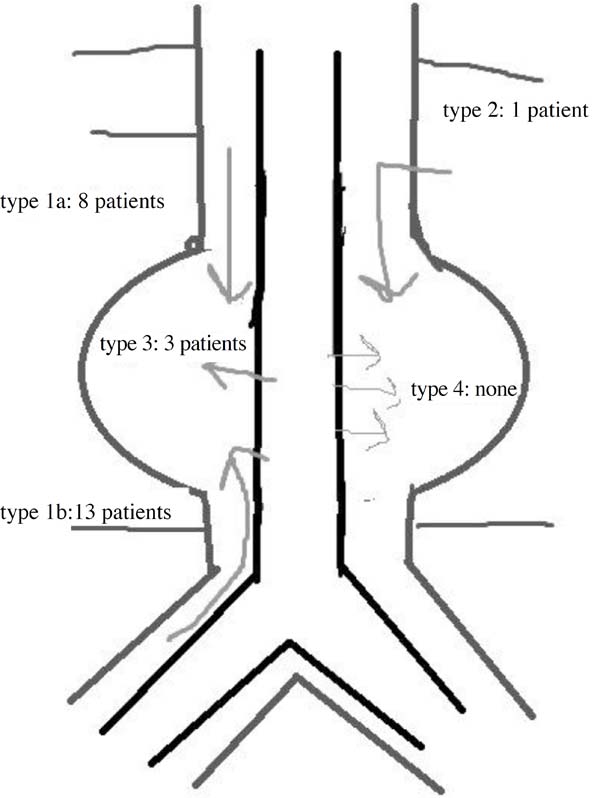 It was also reported renal insufficiency in three people, all of them in the geriatric group; and two of these had ruptured kidneys. Technical success was achieved in all cases except one. Sixty-seven geriatric people underwent EVAR, and only one case was converted to OSR because of a failure to pass the iliac vessels with the stent graft; in this patient, OSR was performed successfully.

There was no statistically significant difference in survival rates between the different age groups. After three years, all patients were alive, except those three that died within two days of the operation.

Six (7.05%) patients underwent renal stent implantation during the same procedure. Five patients were treated with iliac balloon stents (5.8%). The secondary intervention rate was 7% (six patients); in the 36-month follow-up, reintervention was performed in six patients. The left iliac graft was extended in two patients, aortic extension was applied to two patients, one patient underwent aneurysmography with OSR, and one patient underwent a femorofemoral bypass. One of these patients was in the young group; all the others (five patients) were in the geriatric group.

Bi-iliac grafts were used in 82 cases. Only three patients were treated with aorto-uni-iliac grafts and one of them underwent a femorofemoral extra-anatomical bypass.

There was no association between age and aneurysm morphology, but more endoleaks, reinterventions, and complications were observed in patients over 65 years old, though these differences were not statistically significant.

AAA is more commonly seen in the elderly than in the young, and it mostly affects men. The aim of elective repair is to prevent rupture, which causes mortality. EVAR has been widely used since it was first reported in the 1990s, by Paradi[4]. EVAR was first used for ruptured AAAs by Yusuf et al.[5], in 1994.

Once EVAR was established, it was recommended for elderly and high-risk patients. EVAR’s promising results made it attractive for treating young people, low-risk patients, and patients with anatomical risks.

Albuquerque et al.[6] reported, on average, an 84% increase in the use of EVAR between 2005 and 2008, whereas Schwarze et al.[7] reported a 162% increase in EVAR for patients over 85 years old. EVAR is less invasive and better tolerated than conventional OSR.

EVAR needs more secondary interventions, making it necessary to follow up with patients. But EVAR can be performed safely and effectively in both young and geriatric patients. While age is correlated with an increased risk of cardiovascular disease, hypercholesterolemia, and cerebrovascular disease[12], we saw no differences in the rates of these diseases between the young and geriatric groups in our study.

Machado et al.[13] reported that age > 80 years influences the survival curve in only OSR group. But in a study by Schermerhorn et al.[14], when the age increased, the survival rate decreased, even in the EVAR group. A meta-analysis revealed that octogenarians have higher perioperative and mid-term mortality rates than younger patients[15]; however, we found no significant difference in survival rates between the young and geriatric groups.

The life expectancy of AAA patients is the major factor that determines which therapy should be pursued. EVAR is a safe and effective treatment for AAA with low (1-2%) perioperative mortality[20].

Pol et al.[21] reported that higher mortality and morbidity rates are seen in elderly patients than in younger ones, with aortic stent grafts.

Altaf et al.[22]reported a 40% mortality rate among youths over a six-year period and reported that most of these deaths were unrelated to the aneurysm.

Mani et al.[23] reported a five-year survival rate of 69% and a 10-year survival rate of 39.3% after elective EVAR and reported no significant difference in survival between ages. Machado et al.[24] reported a global post-EVAR mortality rate of 1.2%. They reported only two mortalities in the over-80-years-old group and zero mortality in both groups that were younger than 80-years-old. In our study, there was no mortality in the young group and three patients (3.5%) in the geriatric group died from causes related to EVAR, suggesting that age alone can explain the higher mortality rates reported in the literature. There were no statistical differences in the mortality and reinterventions rates between the groups.

The major limitations of this study include the small numbers of patients and the retrospective nature of the analysis. Also, the different types of grafts could affect the results.

Our single-center study shows that it is safe and feasible to repair AAAs via EVAR. Since there were no statistically significant differences in the mortality and reintervention rates between the age groups, EVAR can be used safely in patients of all ages. The advantages of EVAR include that it is a less invasive operative procedure and it generally results in shorter ICU and in-hospital stays than OSR. Reinterventions are the Achilles’ heel of this procedure; however, technological improvements should reduce these complications in the near future.

MY Analysis and interpretation of data; drafting the paper; final approval of the version to be published

OT Conception and design of the work; acquisition of data; revising the work; final approval of the version to be published