Cardiopulmonary Resuscitation in an Average Brazilian Intensive Care Unit: Should We Perform Less or Better?

Introduction: Few data can be found about cardiac arrest in the intensive care unit outside reference centers in third world countries.
Objective: To study epidemiology and prognostic factors associated with cardiac arrest in the intensive care unit (ICU) in an average Brazilian center.
Methods: Between June 2011 and July 2014, 302 cases of cardiac arrest in the intensive care unit were prospectively evaluated in 273 patients (age: 68.9 ± 15 years) admitted in three mixed units. Data regarding cardiac arrest and cardiopulmonary resuscitation were collected in an "Utstein style" form and epidemiologic data was prospectively obtained. Factors associated with do not resuscitate orders, return of spontaneous circulation and survival were studied using binary logistic regression. Statistical package software used was SPSS 19.0 (IBM Inc., USA).
Results: Among 302 cardiac arrests, 230 (76.3%) had their initial rhythm recorded and 141 (61.3%) was in asystole, 62 (27%) in pulseless electric activity (PEA) and 27 had a shockable rhythm (11.7%). In 109 (36.1%) cases, cardiac arrest had a suspected reversible cause. Most frequent suspected cardiac arrest causes were hypotension (n=98; 32.5%), multiple (19.2%) and hypoxemia (17.5%). Sixty (19.9%) cardiac arrests had do not resuscitate orders. Prior left ventricle dysfunction was the only predictor of do not resuscitate order (OR: 3.1 [CI=1.03-9.4]; P=0.04). Among patients that received cardiopulmonary resuscitation, 59 (24.4%) achieved return of spontaneous circulation and 12 survived to discharge (5.6%). Initial shockable rhythm was the only return of spontaneous circulation predictor (OR: 24.9 (2.4-257); P=0.007) and survival (OR: 4.6 (1.4-15); P=0.01).
Conclusion: Cardiopulmonary resuscitation rate was high considering ICU patients, so was mortality. Prior left ventricular dysfunction was a predictor of do not resuscitate order. Initial shockable rhythm was a predictor of return of spontaneous circulation and survival.

DNR = Do no resuscitate order

Cardiac arrest (CA) is a public health issue. It is assumed that 100000 in-hospital CA take place in Brazil every year[1]. According to the last available public data (DATASUS), in 2013, 120.000 in-hospital deaths were resisted in Minas Gerais state, and approximately 8.000 only in Juiz de Fora[2]. It is known that 50% of in-hospital death takes place in Intensive Care Units (ICU)[3]. Despite increasing complexity in cases, survival rate after in-hospital CA has been improving in North America[3].

Since 1992, the International Liaison (ILCOR) has been working on providing evidence-based guidelines in Cardiopulmonary Resuscitation (CPR)[4]. In 2013, Brazilian researchers developed a local adaptation of these guidelines in order to improve adherence in Portuguese speaking physicians[1].

The volume of studies on the subject and the registration of cases attended, either in-hospital or extra-hospital cardiac arrest, have grown expressively[5,6]. In several countries, there is a national register of attendance of CPRs[3,6,7]. This record makes it possible to evaluate the results, study the characteristics and epidemiology of each site, identify the main problems and propose improvements, increasing the survival of patients[3,6].

There has been an exponential growing number of publications regarding CPR records, including out-of-hospital and in-hospital cases[5,6]. Many countries developed an CPR National Registry[6,7]. These records make it possible to evaluate the results, characteristics and epidemiology of each site, identify the main problems and propose improvements, increasing patients survival[3,6].

Nevertheless, there is no registry in Brazil, so far[1]. There is lack in data regarding ICU-CPR profile and prognostic factors associated with death or survival. There are few Brazilian studies and almost all of them were developed in reference university centers, that may not represent real-world concerning CPR in Brazilian ICUs[8,9]. This study prospectively investigated demographic profile and prognostic factors in ICU-CA and CPR in three mixed units is an average Brazilian city.

Primary end-point was survival to hospital discharge and secondary end-points were ROSC and DNR. ROSC was considered only if pulse was present after one hour after CPR cessation and no need to further CPR during this period.

Kolmorov-Smirnov and Shapiro-Wilkis were used as normality tests. Continuous data with normal distribution were described as average and standard deviation. For a non-normal distribution, median and interquartile range (IQR) were used. Nominal and ordinal data were presented as percentages. Exact Fisher test or Mann-Whitney were chosen for group comparisons. Binary logistic regression analyzed prognostic factors for the end-points. A P value of 5% was used.

Demographic data of the 302 ICUCA studied are shown in Table 2.

DNR was applicable in 60 (19.9%) patients. Univariate analysis found that prior left ventricular dysfunction, coronary disease, stroke as admission diagnosis, vasoactive drugs infusion, intra-arterial pressure monitoring and arrest during the dawn were associated with more DNR, while sepsis as an admission diagnosis was less associated with DNR (Table 3). However, multivariate analysis identified prior left ventricular dysfunction as a predictor of DNR (OR=3.1 [CI=1.03-9.4]; P=0.045) (Table 3).

When CPR was analyzed regarding response time, it was noticed a median time of 2 minutes between beginning of CPR and delivery of first defibrillation. Meanwhile, median time to intubation and first epinephrine dose was 7.5 minutes and 1 minute, respectively. 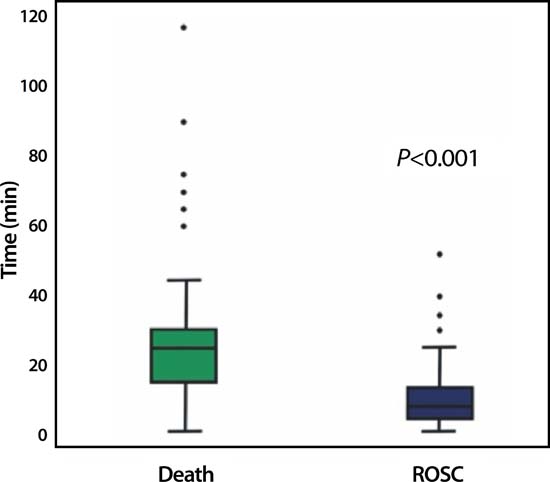 E-CPR was attempted in one patient. None of the patients were submitted to therapeutic hypothermia.

Survival to discharge was achieved in 12 patients out of 213 (5.6%). Ventricular tachycardia/ventricular fibrillation showed a 4.9 odds ratio when compared to other initial rhythms. No other predictor of survival was detected (Table 7)

Out of 12 survival patients, 10 presented a CPS score between 1 and 2, while other two presented a CPS of 3. One of these was a spine trauma patient with paraplegia before CA.

This data represents a three-year registry in three ICU of an average sized city in Brazil. This analysis presents some relevant issues regarding ICU-CA in developing countries. It also allows some inferences about CPR delivered quality.

It is known that ICU-CA survival ranges between 0-42%, depending on many factors, such as team experience and training and patients complexity/profile[6].

The present study noticed a DNR rate around 20% in this population. Since DNR orders in Brazil are not routinely adopted and vary greatly between hospitals and physicians, we evaluated variables related to this decision.

Previous Brazilian data report 65% DNR rate in ICU patients[13]. Previous international studies report a rate of DNR among inhospital and ICU-CA between 60% and 95%[6,13-15].

In developed countries, mainly United States, there is a clear concern among family and ICU team about DNR orders in poor prognostic patients[16,17]. As abovementioned, neither the participating ICUs nor the Brazilian hospitals had an expressed DNR order for this type of patients, so the decision of beginning CPR depended primarily on the physician on duty.

As expected and reported previously[6,13-15], variables such as age, admission diagnosis, cause of CA and previous vasoactive drug administration were related to DNR orders in our population, yet they were not independent predictors. The only independent predictor in our series was left ventricular dysfunction. Although it is not a common finding, it may represent the sickest patients in this sample.

CPR maneuvers in very sick patients with low or no prognosis is a very disputable topic and concern about it is gaining space in the literature[18,19]. Guidelines and current data assure the importance of prevention CA and selecting more and more which cases to perform CPR[18,19].

Only one out of four CPR patients in our series have achieved ROSC. This result is similar to one previously reported Brazilian experience[8], but very poor compared to current literature, including other Brazilian reports[9,20].

Because of that, survival rate was low (5.6%) when compared to international literature[3,5-7,13-15]. It is clear that there was a high rate of CPR in the ICU (low DNR orders) and a bad result compared to the literature. Were there too many attempts of resuscitation?

When the aspects of CPR were analyzed, ventricular tachycardia/ ventricular fibrillation (VT/VF) was found to be the only predictor of ROSC. That finding is very similar to previous reports[5,19]. Other findings, such as CA immediate causes, admission diagnosis e resuscitation timing were not divergent from the literature[8,9,19-21].

Some other observations lead us to infer that there was not a complete adherence to the guidelines. At least 31 cases received atropine and none of the patients that achieved ROSC were submitted to hypothermia. At the time of the study, hypothermia was suggested by the guidelines, especially in VT/VF cases[22,23]. Although some experimental studies suggest that partial pressure of end-tidal carbon dioxide (PetCO2) may not predict ROSC as expected[24], its use is encouraged by the guidelines[1]. Yet its use was not reported in any of the 302 cases.

The ICU admission diagnosis table revealed that over 40% of the patients were surgical cases, known to be patients with better prognosis[6,12]. Mechanical circulatory support, which may positively impact survival in these patients[25], was not available in those ICUs.

On the other hand, average age was 70 years-old with a high incidence of vasoactive drugs administration and the main immediate cause of CA was hypotension, leading to the idea that it was a high-risk cohort.

In 2003, a United States registry of 15k CPRs showed that arrhythmias and hypoxia (reversible causes) were the main immediate CA causes. Hypotension was in third. ROSC and survival rate was 44 and 17%, respectively[26]. Recently, the same registry, now with over 80k patients points out a tendency to increase the survival rate (22.3%)[3].

In Brazil, the adoption of a National Registry and data bank that might allow results evaluation and comparison would be very desirable and may eventually save thousands of lives.

There was a 19.9% rate of DNR orders in the ICU-CA and left ventricular dysfunction was a predictor of DNR.

18. Mancini ME. It's time to understand the dynamics of "do not attemptcardiopulmonary resuscitation" orders. Resuscitation.2015;88:A1-2.

EVJ Data collection; data interpretation; final approval of the version to be published

RUM Data collection; data interpretation; final approval of the version to be published