OBJECTIVE: To report the initial changes after quality-improvement programs based on STS-database in a Brazilian hospital.
METHODS: Since 2011 a Brazilian hospital has joined STS-Database and in 2012 multifaceted actions based on STS reports were implemented aiming reductions in the time of mechanical ventilation and in the intensive care stay and also improvements in evidence-based perioperative therapies among patients who underwent coronary artery bypass graft surgeries.
RESULTS: All the 947 patients submitted to coronary artery bypass graft surgeries from July 2011 to June 2014 were analyzed and there was an improvement in all the three target endpoints after the implementation of the quality-improvement program but the reduction in time on mechanical ventilation was not statistically significant after adjusting for prognostic characteristics.
CONCLUSION: The initial experience with STS registry in a Brazilian hospital was associated with improvement in most of targeted quality-indicators.

Large scale analysis has shown that the adherence to evidence-based quality indicators is associated with better clinical outcomes[1]. Standardized quality control programs are useful to improve these indicators and have shown progressive importance in cardiovascular surgery[2]. Society of Thoracic Surgeons (STS) Database is a strong source of information for quality programs, considering that this registry includes data from more than one thousand hospitals in a wide range of indicators.

The STS Database separates the hospitals according to their performance in diverse indicators delivering benchmarks for their participants. This tool has shown utility for the development and evaluation of quality improvement (QI) programs[3,4]. However, most of this evidence comes from studies in North America and little is known in other regions. The value of this STS registry may not be applicable in other countries outside of the United States of America. Since July 2011, a Brazilian hospital has joined the STS Database. The current report aims to show the first three years of experience and the initial local changes on quality-indicators through QI programs based on STS database reports.

A multifaceted and continuous educational program based on STS reports was implemented during the year of 2012 by a multidisciplinary team targeting three indicators: 1) Time on mechanical ventilation (MV); 2) Length of stay (LOS) in intensive care unit (ICU); 3) Evidence-based perioperative therapies in eligible patients including the use of internal mammary artery in CABG. A local team composed by physicians and nurses developed an institutional protocol for the appropriate use of perioperative medications (including sedation during perioperative period) and implemented a systematic assessment to the first 6 hours after surgery using objectives criteria for extubation. The QI team trained physicians, nurses and physiotherapists to follow the institutional protocol and also used the data from the best hospitals in STS report as benchmark to show to the surgical and clinical staff that the targets were feasible. A case manager nurse was responsible to prospectively collect the data from each patient, enter the data in the institutional database and STS database, and also to check the indicators, making interventions with the team in case of non-adherence to hospital goals.

The hospital has joined STS Database in July 2011 and the first reports were provided in the end of 2011 and beginning of 2012. The three targeted endpoints described above in the intervention section have been chosen through multidisciplinary meetings including clinicians, surgeons, nurses, intensive care staff, anesthesiologist and physiotherapists identified local priorities according to the team interpretation of these reports. Reintubation and readmission to ICU were also monitored to evaluate safety of early extubation and discharge.

STS Database quarterly reports each Hospital's performance in the domains of morbidity, mortality and overall composite (Table 1) rating each hospital from one to three stars according to the differences between the hospital's performance compared to the average results of the other hospitals included in this database. 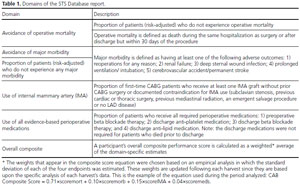 Two groups were compared in order to observe changes after the QI programs: those who underwent surgery before (July 2011 until December 2012) vs. after the complete implementation of the multifaceted program (January 2013 until June 2014).

For primary endpoints, a maximum limit of significance of 5% was defined for chance of type I error (P<0.05) in two-tailed tests. Continuous variables were presented as means and standard deviation for cases that proximity could be determined with a normal distribution. The Student's t test was used to compare means. The Wilcoxon and Mann-Whitney tests were applied to other continuous variables; presented by means and interquartile ranges (25th and 75th percentile). Data related with categorical variables were analyzed using the chi-squared test or the Fisher exact test when necessary. The two target endpoints that may be influenced by prognostic factors (time on MV and LOS in ICU) were also included in a logistic regression multivariate analysis to evaluate the independent association of these indicators with the period of the program (2011/2012 vs. 2013/2014). The following covariates were included in this analysis: age, gender, hematocrit, creatinine (pre and post), cross-clamp and perfusion times, comorbidities, STS risk. Statistical calculations were done using the Statistical Package for Social Sciences program (SPSS, Chicago, IL, USA) version 20.0.

The current analysis followed the ethical aspects described in the Declaration of Helsinki and the Document of the Americas. Our study was approved by the Institutional Ethical Review Board. 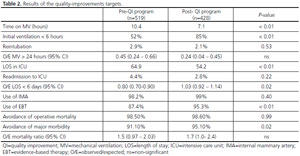 The first three years of experience showed that the use of a large international registry as STS Database as a benchmark to guide QI programs in a Brazilian Hospital was associated with improvement in target quality-indicators. There was a reduction in all the three endpoints targeted. Reintubation and readmission did not increase with an earlier extubation and discharge.

The main goals for the years of 2013 and 2014 were defined by the local group after evaluation of the first STS Database reports. Considering that time on MV, LOS in ICU and use of appropriate therapy cannot be modified by a single intervention, a multifaceted program was necessary to achieve reduction in these indicators.

The use of the own hospital database for QI is a common practice in many services, including Brazilian Hospitals[2] but the use of multicenter registries for continuous QI programs as STS Database had not been available until recently in Brazil despite their use for years in such countries as the United States[1-4]. This tool for evaluation of medical performance was developed to assess relevant evidence-based indicators adjusted to the risk of the patients. The innovation of the present report is that despite cultural barriers and demographic diversity among patients and professionals, this tool showed a very promising application in a new country. Similar to the majority of QI programs implemented in clinical practice, the multifaceted QI program reported was not developed primarily for research purposes but aimed mainly improvement in local indicators along the time in a real world scenario. The difference of the reported QI program is that it was based on quarterly reports of an international database including a Brazilian hospital.

The comparison with different hospitals was extremely useful to identify the most important discrepancies that need to be addressed. However, analysis of outcomes measurements (e.g. mortality, cerebrovascular accident) in this kind of registry should be evaluated carefully because differences in these results may be related to the risk of the patient and not the quality of care. Even considering that STS reports provide the results adjusted to the risks, we made a local validation of these models[5] to be more confident when comparing the results of the hospitals. The current report did not target mortality endpoint which, in our point of view, probably will need more time, more patients and more QI programs to change along the time.

The only targeted item that did not show a statistically significant improvement after the QI program was the use of internal mammary artery. This finding is probably related to the fact that the baseline performance was very close to the target and it would need a large number of patients to show significant difference. Despite the absolute 8% improvement in the use of evidence-based medications, a gap of 5% still remained. This gap is almost entirely related to preoperative beta blockade therapy, which remain an area of debate regarding the benefit of its routine use in the preoperative period of CABG[6]. Thereby, not only the educational intervention but also the strength of the evidence is important to change behavior and improve quality indicators.

The lack of a randomized control group makes the current analysis of endpoints vulnerable to confusion factors. Multivariate analysis was performed to evaluate if the period after the QI program was associated with improvement in the target indicators independently of other prognosis covariates. In addition, prognosis differences are more important in comparisons of clinical outcomes, which was not the main objective of this analysis that targeted indicators related to the process of care. Regarding the use of evidence-based therapy in eligible patients this indicator is not influenced by prognostic factors and multivariate analysis was not considered necessary, especially because the groups compared had similar prognosis characteristics along the years using STS model for in-hospital mortality. Also, these patients were treated in the same service and by the same medical team, and this report intends to represent a real-world utilization of the STS Database.

Other aspect to be considered is that the interventions were specific to three indicators and that this is a single center experience. This concept should be evaluated in more hospitals and different clinical scenarios to confirm the applicability of this tool for a broader use in Brazilian cardiovascular centers.

The initial experience with STS registry in a Brazilian hospital was associated with improvement in most of targeted quality-indicators.

PGMBS Analysis/interpretation of data; statistical analysis; final approval of the manuscript; conception and design; implementation of projects/experiments; manuscript writing or critical review of its content

ACAB Analysis/interpretation of data; final approval of the manuscript; manuscript writing or critical review of its content

DLR Analysis/interpretation of data; final approval of the manuscript

MYO Analysis/interpretation of data; final approval of the manuscript

JCTG Analysis/interpretation of data; final approval of the manuscript

FAC Analysis/interpretation of data; final approval of the manuscript; implementation of projects/experiments

MJR Analysis/interpretation of data; final approval of the manuscript; implementation of projects/experiments

VF Analysis/interpretation of data; final approval of the manuscript; conception and design; manuscript writing or critical review of its content