The pathogenesis of vasculopathies, including aortic and coronary disorders, are uncertain, even though they have been under constant investigation. The potential roles that α-smooth muscle actin (SMA) might play in the development of vasculopathies have drawn much attention.

SMA, encoded by ACTA2 gene, is an isoform of vascular SMA. The major functions of vascular smooth muscle cells (SMCs) are typically vascular motility and contraction, and the functions of certain non-muscle cells, such as myofibroblasts, are healing wounds, scars and fibrocontractive lesions[1], depending on the cyclic interaction between thin filaments composed of the SMC-specific isoform of α-SMA encoded by ACTA2 and thick filaments composed of SMC-specific β-myosin. α-SMA and the encoding gene ACTA2 mutations have been frequently described in relation to pathogenesis of vasculopathies in clinical settings[2]. Studies on ACTA2 mutations have demonstrated that mutation carriers show various vasculopathies, including premature onset of coronary artery disease (CAD), premature ischemic strokes (including Moyamoya disease), and familial thoracic aortic aneurysms and dissections (TAADs)[2]. Proliferative and secretory activities as well as transition from a contractile to a synthetic phenotype of α-SMA were considered the underlying mechanism of vasculogenesis[3]. Experimental studies with explanted SMCs and myofibroblasts from patients harboring ACTA2 revealed that increased proliferation of SMCs contributed to occlusive diseases. Although a series of research works have been undertaken in terms of α-SMA modifications and ACTA2 gene mutations, the underlying mechanisms of pathological processes by way of mutations remain underestimated. In order to highlight the potential mechanisms of pertinent vasculopathies and to enhance management strategies, the phenotypes of α-SMA and implications of ACTA2 mutations in vasculopathies are described.

There are four distinct variants of actins: two vascular SMC (α-SM and γ-SM)-specific, and two cytoplasmic actins (β-NM and γ-NM actins) in eukaryotic cells. α-SMA is located primarily in the microfilament bundles of vascular SMCs and exerts contractile functions. It shows a close relationship with arterial tones and the activation of myofibroblasts[4]. The forceful contractile property of myofibroblasts is attributable to the stress fibers dependant on α-SMA[5]. SMC components and extracellular matrix (collagen and elastin) are determinants of the contractility, distensibility and elasticity of the aortic wall. Extracellular matrix disruption or imbalance of the extracellular matrix components leads to stiffness of the aortic wall and further development of TAAD[6]. In experimental homozygous α-SMA knock-out mice, deficits of vascular contractility and reduced basal blood pressure were noted, implicating the important role of α-SMA in maintaining vascular tone[7].

Normal aortic media predominantly contains α-SMApositive SMCs with homogeneous elastic laminae[8] whereas degeneration is marked by disruptions of α-SMA-positive SMCs[9]. Vascular occlusions are pathologically characterized by medial proliferation of SMCs or enhanced proteoglycan accumulation along with fragmentation and loss of elastic fibers[10]. The α-SMA mutations in TAAD hinder the binding affinity between the monomer and the ligands, thereby generating more unpolymerized monomers[10]. The aortic media of abdominal aortic aneurysm displays fewer α-SMA-positive cells, which are secondary to extensive aortic wall structural damages. Medial SMC density may decrease by 79.1% in abdominal aortic aneurysmal tissue in comparison with that of normal control[8]. Aortic aneurysmal wall shows chronic infiltration of the inflammatory cells, degradation of the extracellular matrix, and apoptosis of SMCs[11]. In addition, macrophages express chemoattractant proteins and matrix metalloproteinases in the atherosclerotic plaques[12] similar to aortic aneurysm, in particular in the aneurysm necks for the stent graft anchoring.

An immunohistological study has shown more α-SMA expressions in coronary erosion lesions than in stable plaques or mildly stenotic plaques[13]. Acute arterial injury was found to be associated with changes in glycosaminoglycans of the extracellular matrix ahead of those of SMC phenotype, whereby matrix glycosaminoglycans are substituted by SMCs rapidly during the modification process where neointima does not generate enough heparin sulphates[14].

Coronary stenting may cause concentric narrowing of the lumen due to neointimal formation, in which the extracellular matrix increases and number of SMCs decreases over time. The neointima is composed of three-layered and circular-arranged α-SMA-positive cells. Immunohistochemical studies of the common carotid artery with stent deployment showed in-stent thrombus around the stent struts with the neointima composed mainly of α-SMA-positive cells within type I collagen-positive matrix[15]. Comparative studies on the abdominal aortopathies revealed that α-SMA-positive SMCs were predominant in the aortic media of the occlusive abdominal aorta and the aneurysmal neck; however, SMCs were disrupted and disarrayed in the aneurysmal body, in which much fewer SMCs were present than in the occlusive aorta and the aneurysmal neck[16].

ACTA2, the encoding gene of α-SMA, located at 10q22-q24 and composed of eight coding exons, is a major contractile component of the arterial SMCs[2]. ACTA2 gene defects that cause familial TAAD type 6 have been reported[17]. So far, more than 20 different missense mutations of ACTA2 have been found to be associated with aortopathies[18]. ACTA2 mutations may show reduced penetrance and variable expressivity due to a dominant negative mechanism[19]. Heterozygous ACTA2 mutations may lead to impaired SMCs, showing pathological hyperplasia and disarray due to medial degeneration, vascular wall remodeling, increased wall stiffness, and aortic dilation[20,21]. It may indicate a possible increased risk of stroke and CAD rather than hypertrophy[2], and it may be a causative etiology of multiple tiny aneurysms of the cerebral arteries, responsible for pediatric acute ischemic stroke[22]. The relationship among SMA, ACTA2 gene, and contractile property in vasculopathies is listed in Figure 1. 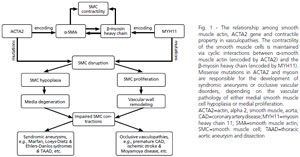 A mutation in a single ACTA2 gene can cause a variety of vascular diseases[2]. Guo et al.[27] reported that mutations in ACTA2 gene are the most common mutations, accounting for 10-15% of familial TAAD mutations. By contrast, only 0.9% of the patients with TAAD had a mutation in the ACTA2 gene according to Lerner-Ellis et al.[28]. The prevalence of ACTA2 mutations was 12-16% in familial TAAD[21,29] as opposed to 0% in sporadic cases[21]. In patients with known TAAD, non-synonymous missense mutations were identified in 3.85% probands[30]. The TAAD family members showed a penetrance as low as 0.48% in heterozygous ACTA2 mutations[31]. TAAD was the primary vascular disease in ACTA2-mutation carriers, some of which also had premature CAD, ischemic strokes and multiple vascular diseases, including Moyamoya disease[2,32,33]. However, none of the family members without ACTA2 mutation had TAAD, premature CAD or stroke[2]. Causative gene mutations for TAAD have been identified, including TGFβR2 at the TAAD2 locus, MYH11 at the 16p locus, and ACTA2 at the TAAD4 locus[34]. Causative genes responsible for vasculopathies such as aortic, coronary, peripheral vascular and cerebrovascular disorders were carefully depicted in Table 1[2,20,30,31,34-41]. 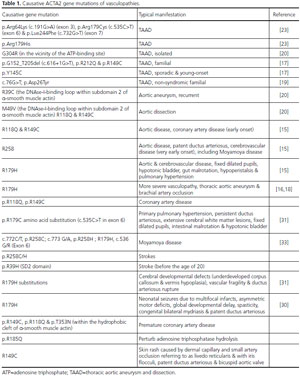 Heterozygous missense mutations in ACTA2 disrupting Arg179 had persistent ductus arteriosus and congenital mydriasis, variable presentation of pulmonary hypertension, bladder and gastrointestinal disorders, as well as carotid and cerebrovascular abnormalities, including absent basal "Moyamoya"collaterals[42]. MYH11 and ACTA2 missense mutations were associated with upregulation of the TGF-β signaling pathway[29]. Distinct loci for large pedigrees of familial TAAD were on 5q13-q14, 16p13.12-p13.13, 11q23.3-q24, 3p24-p25, 9q22, 10q22-q24, and 15q24-q26 (MIM 607087, 132900, 607086, 6103080, 608967, 611788, and unassigned), with four being identified as ACTA2 (MIM 102620, 10q23), MYH11 (MIM160745, 16p13), TGFβR1 (MIM 190181, 9q22), and TGFβR2 (MIM 190182, 3p22)[43]. Patients presenting with acute ascending or descending aortic dissections have also been found to have ACTA2 mutations[27]. Half of the mutation carriers have no aortic disease, while those with aortic aneurysms usually have missense ACTA2 mutations with fewer deletions and splice-site mutations[19]. Aortic aneurysms pending to rupture may show various aortic dimensions, in particular, patients with aortic aneurysm with ACTA2 mutations have an aortic dimension of <5.0 cm prior to dissection. Therefore, early surgical treatment is recommended in such patients, even with minimal changes to aortic dimensions[2]. Shimojima et al.[44] sequenced the nine exons of ACTA2 in a cohort of 53 patients with Moyamoya disease from 7 familial series without showing any mutations. Similarly, Lee et al.[45] also reported that mutations in human RNF213 were present whereas ACTA2 gene mutations were absent in 36 Taiwanese Moyamoya patients.

α-SMA is important for contractile functions of the developing heart at an early embryonic stage. Research on avian epimyocardial cells demonstrated α-SMA mRNAs were mainly detected in conus arteriosus and the ventral aorta before Hamburger-Hamilton stage (HH) 12. In subsequent stages, the α-SMA mRNA was apparently confined to SMCs of the vascular system. The contractive properties of SMCs can be suspended while secretory functions prevail by exertions of mitogens, including platelet-derived growth factor (PDGF) and basic fibroblast growth factor (bFGF), and extracellular matrix components such as collagen, elastin and proteoglycans that contribute to SMC differentiation and proliferation[3]. Hence, α-SMA expression inversely correlates with cell proliferation, but directly correlates with contractile efficiency of SMCs[46].

Fibronectin and laminin are expressed typically in the arterial media during fetal and adult life in different forms, and a paradoxical transformation of the proteins from adult to fetal variants takes place during the vascular pathological processes. Vascular SMCs are also implicated in vessel remodeling, in either physiological or pathological conditions, such as pregnancy, exercise, or vascular injury[47]. During the remodeling process after vascular injury, the SMCs resume a contractile phenotype, with a cytoplasm dominated by α-actin filaments until the final extent of neointimal formation. The phenotype of cultured rabbit SMCs can be modified by PDGF-BB, resulting in faster growth, but SMCs preincubated with conditioned medium of macrophages plus anti-PDGF antibody did not grow faster. Human arterial and venous SMCs exhibited very different proliferative responses to PDGF isoforms. Proliferation of arterial SMCs was strongly stimulated by PDGF-AA, but venous SMCs showed no proliferative response to PDGF-AA, demonstrating instead a significantly greater proliferative response to PDGFBB than arterial SMCs[48]. In cultured rat aortic SMCs, enhanced proliferation, elongated cellular deformity as well as a fluctuation pattern of growth under the exertion of TGF-β1 were present[49].

During angiogenesis and vascular remodeling due to restenosis and atherosclerosis, SMCs regulate endothelial cell quiescence and angiogenic responsiveness to cytokines. A series of studies revealed TGF-β stimulates the matrix production of vascular SMCs, including type I collagen. The enhanced α-SMA expression induced by TGF-β1 increases the contraction of collagen gel mediated by bovine corneal fibroblasts in a dose-dependent manner. Integrin α2β1, one of the collagen-binding receptors, binds fibril-forming collagens, collagens I, II, III and X. It joins the process of TGF-β1-induced α-SMA production and regulation, capable of generating intracellular tension.

α-SMA disruption results in SMC hyperplasia via certain cellular pathways involving FAK, p53 and PDGF receptor-β, contributing to vascular occlusive disorders in patients with ACTA2 missense mutations. This is supported by the experiments in ACTA2 knockout mice, in which decreased aortic contractility was displayed[50]. The structural heterogeneity of genomic DNA encoding the chicken α-SMA gene in 3' untranslated regions is of alternative polyadenylation signals, but with uncertain functional implications. Moreover, actin isoform synthesis after balloon induced endothelial denudation warrants further investigations in order to be employed early in clinical practice.

ACTA2 mutations are associated with structural disruption and functional impairment of contractile proteins, and predispose to a variety of diffuse vascular diseases including TAAD, CAD, ischemic strokes, and Moyamoya disease. Vascular SMCs are also implicated in vascular remodeling in both physiological and pathological conditions. Regulation of differentiation and proliferation of SMCs may control the expression of genes encoding for proteins responsible for the contractile function of the SMCs. In the process of vascular remodeling, contractive properties of SMCs can be suspended while secretory functions prevail by mitogen impacts. Research on α-SMA and ACTA2 mutations is imperative for understanding the pathogenesis and determining the pertinent management strategies of vasculopathies. Further in-depth studies of causative genes of ACTA2 mutations may largely facilitate the diagnosis and treatment of the underlying disorders.