OBJECTIVE: To evaluate the effects of resistance exercise applied early after coronary artery bypass grafting.
METHODS: It is a randomized controlled trial with 34 patients undergoing coronary artery bypass grafting between August 2013 and May 2014. Patients were randomized into two groups by simple draw: a control group (n=17), who received conventional physical therapy and an intervention group (n=17), who received, additionally, resistance exercise. Pulmonary function and functional capacity were evaluated in preoperative period and hospital discharge by spirometry and the six-minute walk test. For statistical analysis, we used the following tests: Shapiro-Wilk, Mann-Whitney, Student's t and Fisher's exact. Variables with P<0.05 were considered significant.
RESULTS: Groups were homogeneous in terms of demographic, clinical and surgical variables. Resistance exercise exerted no effect on pulmonary function of intervention group compared to control group. However, intervention group maintained functional capacity at hospital discharge measured by percentage of predict distance in 6MWT (54.1±22.7% vs. 52.5±15.5%, P=0.42), while control group had a significant decrease (59.2±11.1% vs. 50.6±9.9%, P<0.016).
CONCLUSION: Our results indicate that resistance exercise, applied early, may promote maintenance of functional capacity on coronary artery bypass grafting patients, having no impact on pulmonary function when compared to conventional physical therapy.

Coronary artery bypass grafting (CABG) is the main treatment for coronary artery disease when medicines or percutaneous procedures are not enough to revert symptoms[1,2]. Over the past 10 years, the use of more durables grafts, aiming to minimize injuries to the patients, brought a progressive improvement to this surgical procedure[3].

This progress has also encouraged advancements in the area of cardiac rehabilitation, which uses supervised exercise as therapeutic basis[4,5]. It is known that the practice of regular physical activity is beneficial and recommended as one of the best treatments for patients undergoing cardiac surgery, intending to reduce the risk of future cardiac events[6].

In this respect, these patients have performed not only aerobic exercises but also resistance exercises and this practice is recommended for increase in functional capacity. The benefits of resistance exercise associated to aerobic exercise include an overall decrease of recurrent cardiac events, increased survival, physical and psychosocial independence, and improved quality of life[8].

Since the first guidelines about resistance training established in 2000 by American Heart Association (AHA) and American College of Sports Medicine (ACSM), this exercise modality has become more accepted and included in exercise programs for subjects with and without cardiovascular disease. Brazilian Guidelines for Cardiac Rehabilitation and the ACSM report that muscle strength is fundamental to health, to the maintenance of functional capacity, and to achievement of satisfactory quality of life[5,9].

Considering the above, our aim consists in evaluate the effects of resistance exercise applied early after coronary artery bypass grafting on functional capacity and pulmonary function.

Type and location of the study

This randomized clinical trial was conducted in a Brazilian university hospital.

A non-probabilistic sample of adult patients undergoing CABG between August 2013 and May 2014 were included in our study. Patients not included had chronic obstructive pulmonary disease, neurological sequelae, neuromuscular disease or submitted to associated, emergency or off-pump surgery. Perioperative deaths, surgical re-intervention and patients who remained on mechanical ventilation longer than 24 hours or noninvasive ventilation longer than four hours were excluded.

In preoperative period, patients were informed and guided about the study and were subsequently evaluated. Data were collected from medical records and physical therapy evaluation form using a specific instrument developed for the study divided into three parts, containing data about pre-, intra-, and postoperative periods. Then, to assess pulmonary function, we performed spirometry, which involved the measurement forced vital capacity (FVC), forced expiratory volume in the first second (FEV1), forced expiratory coefficient in the first second (FEV1/ FVC [%]), and peak expiratory flow (PEF), following criteria established by the guidelines for pulmonary function tests[10]. For mortality risk assessment we used EuroScore II[11].

The six-minute walk test (6MWT) was performed to evaluate functional capacity according to guidelines of American Thoracic Association[12]. The equation proposed by Iwama et al.[13] was applied to estimate the predicted distance walked in the 6MWT. We performed spirometry and 6MWT preoperatively and at hospital discharge.

Resistance exercises consisted of muscle training with dumbbells for UL (biceps and triceps) and shin pads for LL (quadriceps) with the patient in Fowler 45º, during immediate postoperative period, and subsequently sitting in bed with free LL allowing alternated and unilateral knee extension. Training of hip adductors and abductors and triceps surae occurred at ward, where patient was free to ambulate, and consisted of three sets of 10 repetitions for each muscle group. Sessions were performed right after extubation in both the groups, for 30 minutes, twice a day in the intensive care unit (ICU) and once a day at ward until hospital discharge.

In compliance with Resolution 466/12 of the National Health Council, the present study was approved by the Institutional Research Ethics Committee (No. 337.227). 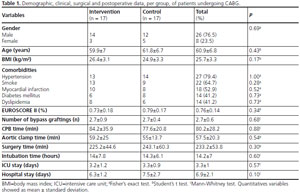 Intubation time, length of stay in ICU and hospital were not significantly different between the groups, with an average duration of 14.2±7 hours, 3.3±1 days and 6.9±2.1 days, respectively (Table 1). 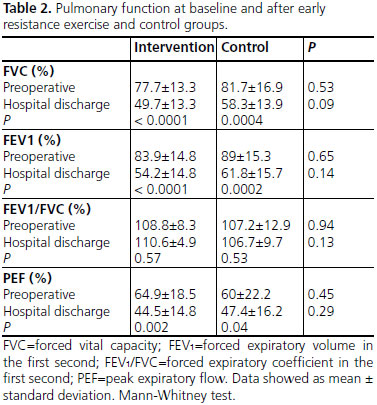 Intra-group analysis indicated that the control group subjected to conventional physical therapy showed a significant decrease (P=0.016) in the predicted distance on the 6MWT when comparing preoperative and hospital discharge assessments. However, the intervention group submitted to resistance exercise maintained the predicted distance on the 6MWT (Table 3 and Figure 2).

A previous study that compared pulmonary outcomes in patients undergoing CABG indicated that on-pump surgery worsened lung compliance, gas exchange and prolonged intubation time[16]. In this regard, all patients in our study underwent on-pump surgery and, therefore, pulmonary dysfunction is expected.

Concerning to respiratory mechanics, our results showed a significant decrease in lung volume and capacity after CABG, in both groups, as other studies in this population[15,17]. Oliveira et al.[18] suggested that the decrease in FVC and FEV1 occurs by increased respiratory effort, shallower breathing due pain and decreased chest expansion secondary to sternotomy and surgical manipulation, resulting in restrictive ventilatory dysfunctions after surgery.

Decreased FVC and FEV1 after cardiac surgery affects coughing and sputum clearance, which may lead to obstruction of small airways, predispose the occurrence of micro-atelectasis and reduction of oxygenation, increasing hospital stay[19].

Exercise programs are essentials for patients undergoing cardiac surgery[20]. El-Ansary et al.[21] relate that, although pulmonary dysfunction is common in postoperative period, musculoskeletal disorders are underdiagnosed after cardiac surgery, with an incidence between 40% and 80%[4].

Recently, Gonçalves et al.[9] reported that patients showed good tolerance during the practice of resistance exercise and it was considered safe due to lack of complications or cardiovascular events. These authors related as benefits of resistance exercise in cardiac patients: health improvement, control of risk factors and functional capacity increase. However, it is necessary to emphasize the importance of specific and individual evaluations prior to exercise prescription.

We found decrease in predicted distance walked in 6MWT between preoperative period and hospital discharge, as expected. However, patients who performed resistance exercise maintained their functional capacity when compared to control group.

We evaluated the effects of resistance exercise applied early after CABG patients, starting the protocol in the first postoperative day. Researches about this topic, especially, concerning early resistance exercise in this population are scarce, which difficult comparisons of our results, emphasizing the importance of this study.

Some patients presented pulmonary dysfunction and/or complications, requiring noninvasive or invasive ventilation for a long period or even surgical reintervention. Furthermore, peripheral muscle strength was not assessed.

Our results indicate that resistance exercise, applied early, may promote maintenance of functional capacity on CABG patients, having no impact on pulmonary function when compared to conventional physical therapy.

DLB Design and drawing of the study; implementation of projects/experiments; analysis/interpretation of data; statistical analysis; manuscript writing or critical review of its contents; final approval of the manuscript

MGBS Execution of operations/experiments; manuscript writing or critical review of its contents; final approval of the manuscript

LNS Execution of operations/experiments; final approval of the manuscript

MAGC Execution of operations/experiments; final approval of the manuscript