OBJECTIVE: To test several weaning predictors as determinants of successful extubation after elective cardiac surgery.
METHODS: The study was conducted at a tertiary hospital with 100 adult patients undergoing elective cardiac surgery from September to December 2014. We recorded demographic, clinical and surgical data, plus the following predictive indexes: static compliance (Cstat), tidal volume (Vt), respiratory rate (f), f/ Vt ratio, arterial partial oxygen pressure to fraction of inspired oxygen ratio (PaO2/FiO2), and the integrative weaning index (IWI). Extubation was considered successful when there was no need for reintubation within 48 hours. Sensitivity (SE), specificity (SP), positive predictive value (PPV), negative predictive value (NPV), positive likelihood ratio (LR+), and negative likelihood ratio (LR-) were used to evaluate each index.
RESULTS: The majority of the patients were male (60%), with mean age of 55.4±14.9 years and low risk of death (62%), according to InsCor. All of the patients were successfully extubated. Tobin Index presented the highest SE (0.99) and LR+ (0.99), followed by IWI (SE=0.98; LR+ =0.98). Other scores, such as SP, NPV and LR-were nullified due to lack of extubation failure.
CONCLUSION: All of the weaning predictors tested in this sample of patients submitted to elective cardiac surgery showed high sensitivity, highlighting f/Vt and IWI.

Cardiac surgery is a complex procedure that alters several mechanisms required for homeostasis, leading the patient to a critical condition. To ensure adequate recovery, intensive care are needed during post-operative period, including vital signs monitoring and mechanical ventilation (MV)[1,2].

Ventilatory support is often removed right after admission to the intensive care unit (ICU), since the patient is lucid and has hemodynamic stability, receiving low doses of vasoactive drugs[3-5]. However, sometimes patients need prolonged MV, which increases both the cost and the risk of complications[6,7].

Ventilator weaning decision must be based not only on clinical judgment[8,9], but also on several predictors that may be applied to support the decision-making process[10]. The McMaster Report from the Agency for Healthcare Policy and Research (AHCPR) reviewed and analyzed 66 predictors, but only eight showed consistently significant likelihood ratios: minute volume (Ve); negative inspiratory force (NIF); maximal inspiratory pressure (MIP); airway occlusion pressure at 0.1 second to MIP ratio (P0.1/MIP); static compliance (Cstat); respiratory rate, oxygenation and pressure index (CROP); respiratory rate (f); tidal volume (Vt); and, in particular, the ratio of respiratory frequency to tidal volume (f/Vt), known as the Tobin Index[11,12].

This prospective and quantitative study was conducted at a university hospital in São Luís, Maranhão, Brazil. We used a non-probabilistic sample of adult patients submitted to elective cardiac surgery and admitted to the Cardio ICU between September and December 2014. The study was approved by the Institutional Ethics Committee (nº 785.917) and all patients signed an Informed Consent Form.

We excluded patients with neurological, pulmonary or congenital heart diseases and those submitted to emergency surgery. Patients who needed surgical re-intervention, died, required MV over 48 hours after surgery, or had incomplete medical records were also excluded. 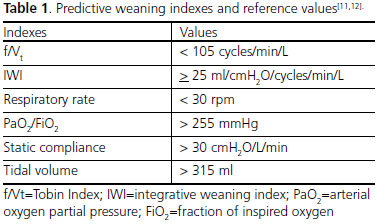 During the spontaneous breathing test (SBT), the patient was monitored for evidence of weaning failure, such as f > 35 rpm; SaO2 < 90%; heart rate > 140 bpm; systolic blood pressure > 180 mmHg or < 90 mmHg; agitation; sweating; and altered level of consciousness[14]. If none of these signs were observed and after registering of weaning predictors, patients were extubated. Extubation was considered successful if the patient did not require reintubation within 48 hours[11].

Of the 120 patients initially included, 20 were excluded: 10 due to MV over 48 hours, 5 due to associated congenital heart disease, 3 due to incomplete medical records, and 2 due to death after surgery. Therefore, the final sample was comprised of 100 patients. 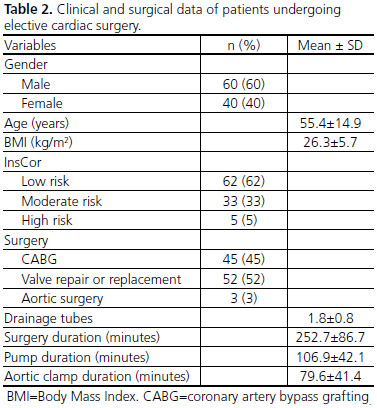 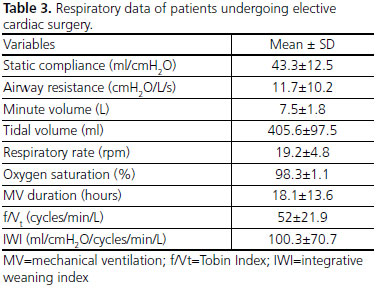 In our study, which tested MV weaning predictors after cardiac surgery, all patients were successfully extubated. This was expected since most of the patients had low risk of mortality. It is known that the objective of intra- and post-operative MV is to guarantee adequate pulmonary ventilation until the patient is clinically able to breathe spontaneously. Thus, weaning must be considered as soon as possible[5].

It is important to mention that little research concerning weaning predictors after cardiac surgery has been found in the literature, emphasizing the importance of our study.

All predictors analyzed showed high sensibility. This result is corroborated by other studies that showed better performance of weaning predictors in patients under mechanical ventilation for short periods, as our sample[10,17-19].

Tobin Index (f/Vt) is considered the most sensitive parameter for predicting weaning success[10,12,14,20,21], supporting our findings. However, research has demonstrated that this index is not as accurate[22-26]. This is explained by differences in the studied populations, which lead to variation in pretest probability and, consequently, test referral bias[27].

Different from our findings, a recent study with 72 patients demonstrated that evolution of breathing pattern, assessed by percent change in f/VT during SBT, was better than a single mensuration. A 5% increase in f/Vt after 30 minutes of SBT revealed an area under the ROC curve of 0.83, 83% of sensitivity and 78% of specificity[28].

On the other hand, Boniatti et al.[30] evaluated a modified IWI, which utilized peripheral oxygen saturation instead of SaO2, and concluded that this index, similar to other predictors, does not accurately predict extubation failure.

Some studies showed that PaO2/FiO2 ratio was not accurate for predicting successful weaning[13,31]. A large variation of its values may predict extubation success (<150 to 300 mmHg)[10,32] and this could explain differing results. Another point that must be considered is the possibility of extubation even with lower-than-recommended values[33].

The small sample is a major limitation of our study. In addition, the lack of extubation failure compromised statistical analysis, although this may be justified by the sample characteristics.

All of the weaning predictors tested in this sample of patients submitted to elective cardiac surgery showed high sensitivity, highlighting f/Vt and IWI.

MGBS Study design; implementation of projects/experiments; analysis/interpretation of data; manuscript writing or critical review of its content; final approval of the manuscript

MAGC Implementation of projects/experiments; final approval of the manuscript

LNS Implementation of projects/experiments; final approval of the manuscript

RLO Implementation of projects/experiments; final approval of the manuscript

TFRF Implementation of projects/experiments; final approval of the manuscript

RAMA Implementation of projects/experiments; final approval of the manuscript